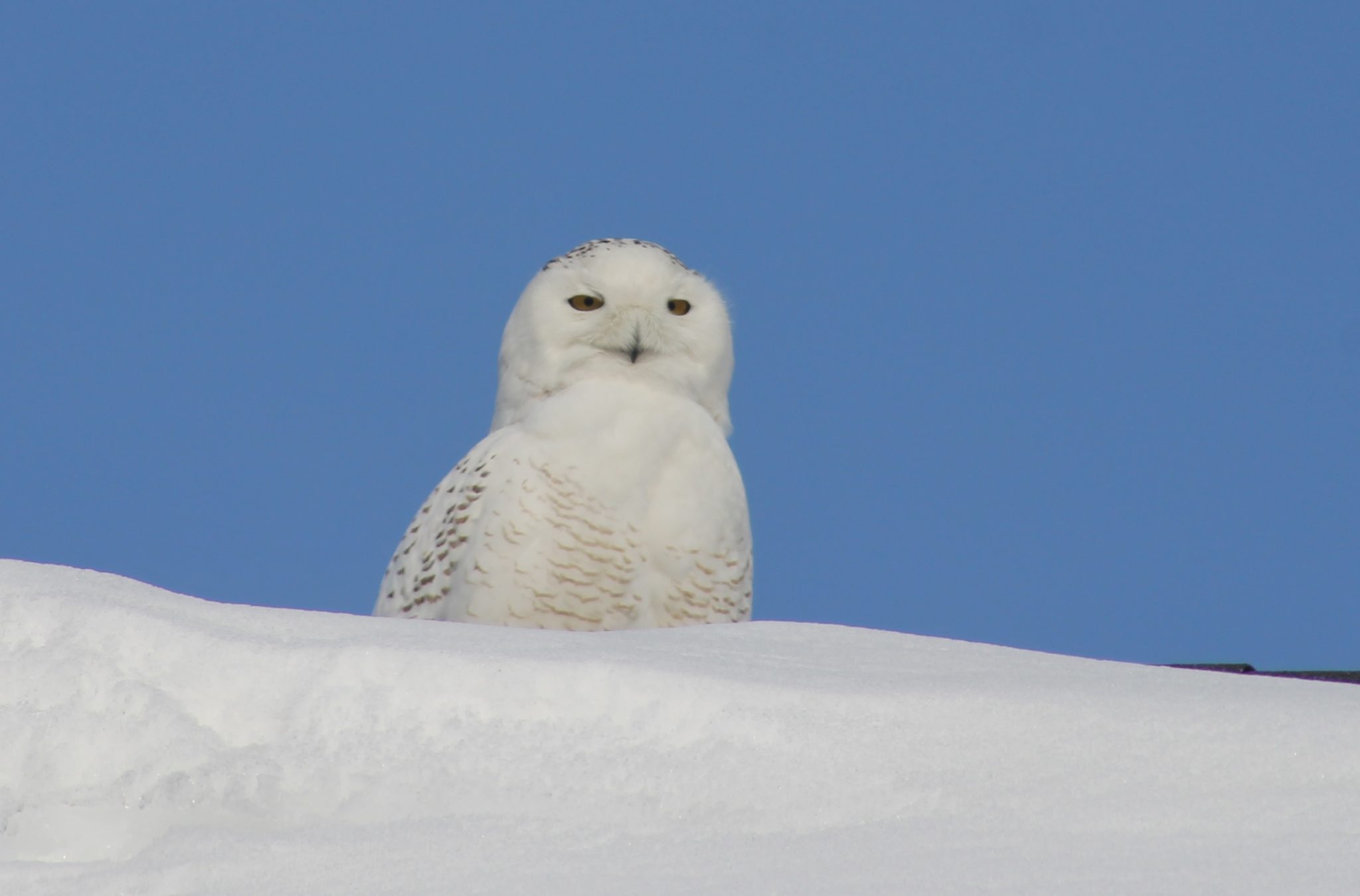 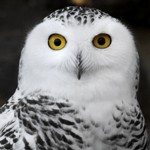 Delaware was then found at a Baltimore area airport with an injured wing on March 18, 2014. She was taken to The Maryland Zoo at Baltimore where her wing was surgically repaired, and after a summer of care at Owl Moon Raptor Center and Tri-State Bird Rescue, she was released at Assateague Island State Park in Maryland on December 11, 2014. She was the first owl to receive a transmitter for the 2014-2015 season. A month later, after confirming that she had readjusted to the wild, she was retrapped and her transmitter removed. Her transmitter was underwritten by contributions to Project SNOWstorm. (Photo ©The Maryland Zoo at Baltimore) 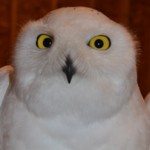 Updated 4/9/15 – This adult male Snowy Owl is nicknamed Chaumont (pronounced “Shaa-moe”), for the small town at the extreme eastern end of Lake Ontario, just a few miles from the Canadian border, where he was captured, and where he has spent most of the winter. 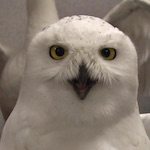 Updated 2/15/15 – Alma was trapped at Gerald R. Ford International Airport in Grand Rapids, banded, tagged and relocated 84 miles (136 km) southeast to the Waterloo State Recreation Area near Chelsea, MI. He is an adult male, probably in his third year.

This is the first SNOWstorm Snowy Owl for Michigan, the result of a wide, collaborative network between researchers, a local college, several organizations, agencies and institutions in that state. And besides adding to our growing understanding of the winter ecology and movements in this species, Alma may help us understand how to better protect snowy owls at airports. 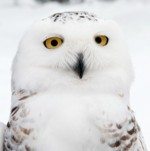 This third year female was trapped near Pickford, on the Upper Peninsula of Michigan, on Feb. 8, 2015, and fitted with a transmitter sponsored by Michigan Bird Conservation, a collaboration of the Audubon Society of Kalamazoo, the Kalamazoo Valley Bird Observatory/Kalamazoo Nature Center, Laughing Whitefish Audubon Society and Michigan Audubon Society. She is one a large concentration of snowy owls on the eastern UP.  (Photo ©Nova Mackentley) 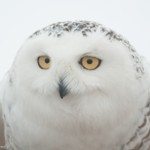 Updated 3/8/15 – Prairie Ronde, an after-third-year female, was trapped by USDA Wildlife Services at the MBS International Airport in Saginaw, MI, as part of their ongoing operations to remove snowy owls from these dangerous environments. She was banded, tagged and relocated Feb. 11, 2015, to relict prairie and farmland in Prairie Ronde Township near Schoolcraft, MI.  Her transmitter was paid for by donations to Project SNOWstorm. (Photo ©Chris Neri) 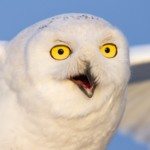 Updated 4/27/15 – This third year male was banded as an immature by Steve Huy after being trapped by Aphis Wildlife Services at Martin State Airport in Baltimore, Maryland on March 14, 2014. He was relocated to Middletown in Western Maryland.

Baltimore was recaptured at Martin State Airport on February 13, 2015. He was fitted with a transmitter and relocated to Assateague Island National Seashore on February 14, 2015. His first check-in came within hours of being released and, although he hadn’t traveled far, he was headed straight for Baltimore. Time will tell if his relocation keeps him out of the dangerous domain of busy airports. Baltimore’s transmitter was sponsored by the Baltimore Bird Club. (Photo ©Chris Hudson) 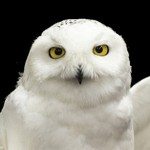 Updated 4/6/15 – This adult male was trapped by Gene Jacobs at Central Wisconsin Airport near Stevens Point, WI, on Feb. 13, 2015, and relocated to Madison Audubon’s Goose Pond Sanctuary, which is part of a 550-acre restored prairie in southcentral Wisconsin that is hosting a number of other snowy owls. Goose Pond’s transmitter is generously underwritten by the Madison Audubon Society. (Photo ©Richard Armstrong) 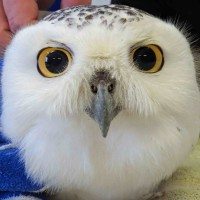 Updated 4/17/15 – This third-year female was captured at Detroit Metropolitan Airport by USDA WIldlife Services and relocated to northwestern Ohio. She was tagged by Mark Shieldcastle from Black Swamp Bird Observatory, and released Feb. 15, 2015, in farmland north of Oak Harbor, OH. Buckeye is part of Project SNOWstorm’s and Wildlife Services’s efforts to learn more about the most effective methods and distances to safely relocate owls from airports. Her transmitter was generously sponsored by Black Swamp Bird Observatory and the Kirtland Bird Club. (Photo ©BSBO) 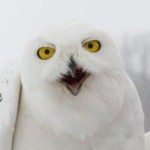 Updated 4/6/15 – This adult male was trapped by Tom McDonald on Feb. 21, 2015. He is named for the town of Geneseo, close to where he was trapped, which is just to the west of New York’s Finger Lakes. (Photo ©Laurie Dirkx Photography) 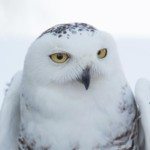 Updated 4/6/15 – This adult female was trapped by Tom McDonald in the small community or Orleans which is near La Fargeville, NY, on Feb. 22, 2015. (Photo ©Aaron Winters) 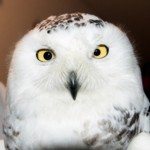 Updated 4/9/15 – This adult female was trapped by SNOWstorm cooperators Nova Mackentley and Chris Neri on March 5, 2015. She is the fourth snowy owl marked with a transmitter in Michigan. (Photo ©Nova Mackentley) 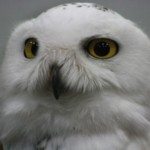 Updated 3/14/15 – This adult female was trapped by SNOWstorm cooperator Gene Jacobs on March 8, 2015. She is the second snowy owl marked with a transmitter in Wisconsin this season. (Photo ©Mike Mathes, Tri-County News, Kiel, WI) 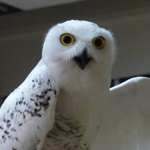 Updated 5/9/15 – Erie, an immature male, was tagged in near the Erie, PA, International Airport on Jan. 19, 2014, along with Millcreek. He was one of several snowy owls in the winter of 2013-14 that spent the majority of their time well offshore, on the frozen surface of the Great Lakes — in his case, Lake Erie — making only occasional visits to land. We assume these owls were hunting waterbirds in the ever-changing network of open-water cracks between the massive plates of wind-shifted ice covering the lakes. In spring he began moving north, first to Lake St. Clair, then up the eastern side of Lake Huron, remaining on offshore ice. He was the third owl to return from our first season, reporting in from the Bruce Peninsula on January 6, 2015. 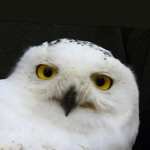 Updated 4/27/15 – Millcreek, an immature male, was tagged in Millcreek Township near the Erie, PA, International Airport on Jan. 19, 2014, along with Erie. He was one of several snowy owls in the winter of 2013-14 that spent the majority of their time well offshore, on the frozen surface of the Great Lakes — in his case, Lake Erie — making only occasional visits to land. We assume these owls were hunting waterbirds in the ever-changing network of open-water cracks between the massive plates of wind-shifted ice covering the lakes. He was last detected in late April at the east end of Lake Erie, off the Buffalo waterfront. 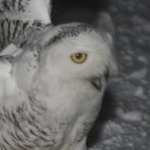 Updated 4/9/15 – Braddock, an immature male, was tagged Jan. 25, 2014, near Rochester New York by Tom McDonald. He spent the winter largely on the frozen surface of Lake Ontario, only occasionally coming to land, and apparently hunting for waterbirds along the ice margin. In spring he began moving northwest across Lake Ontario and up the length of Georgian Bay, then returned southeast to Lake Simcoe and Lake Ontario, before starting north again in mid-April. He was last detected April 14 in southeastern Ontario. He checked in on Feb. 1, 2015, close to Montreal, having traveled into northern Nunavut over the summer. (Photo ©Tom McDonald) 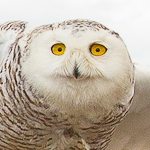 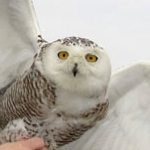 Updated 4/17/15 – This immature female was trapped at Martin State Airport near Baltimore, MD and relocated March 16, 2014, to the Monocacy River watershed by Dave Brinker and Steve Huy. This is was Project SNOWstorm’s 22nd, and final, owl to receive a transmitter during the 2013-14 season.

Monocacy immediately returned to inner-city Baltimore. Unlike our other owls, whose transmitters were programmed to collect a 3D GPS location every 30 minutes, Monocacy’s unit was collecting locations every 30 seconds as an experiment. Knowing this would eventually drain the battery, we sent the transmitter a command to switch back to 30 minutes, but it did not respond, and fell silent March 28, 2014.

On Feb. 7, 2015, Monocacy was trapped by airport personnel at New York’s LaGuardia Airport in Queens. After a brief stay at the Raptor Trust in Millington, NJ, to check a minor wing cut, she was given a new transmitter and released on the south shore of Long Island. Her old transmitter yielded incomplete data, but showed much of her route north to the northern Ungava Peninsula of Quebec, where she remained through at least early July.