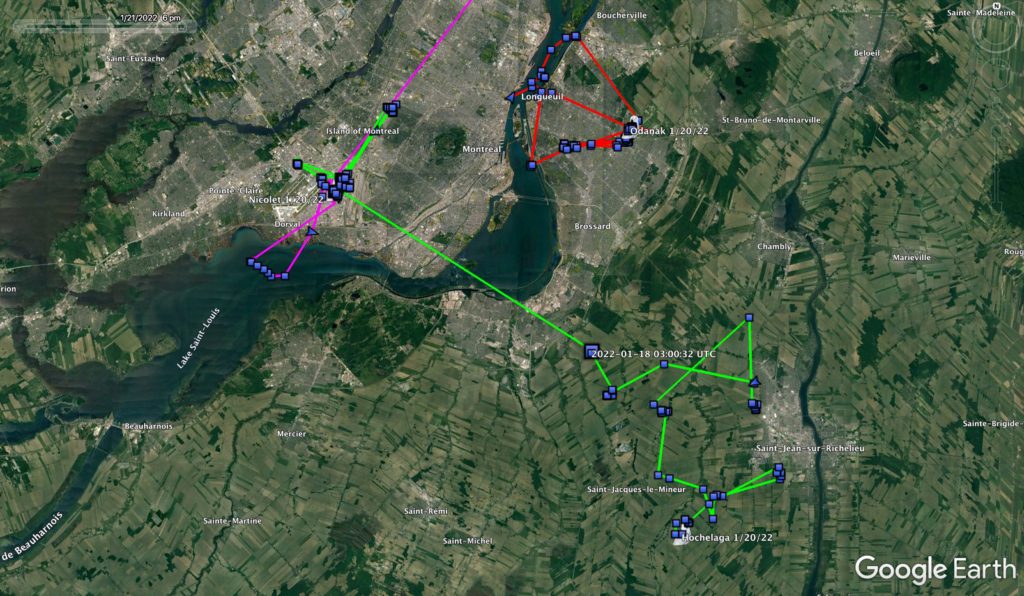 Nicolet (purple) came back to the Montréal airport, while Hochelaga (green) decamped to quieter environs and Odanak (red) spent some time on the waterfront. (©Project SNOWstorm and Google Earth)

We’ve had some interesting developments with our tagged owls, but at the national level, the biggest snowy owl news this past week has been the growing attention on a snowy that’s wintering in downtown Washington, D.C., and appearing most every night like clockwork at Union Station, within view of the U.S. Capitol.

In addition to drawing crowds of birders, photographers and curious commuters, the owl has piqued the attention of the Beltway media, and we’ve been busy fielding interview requests from the likes of the Associated Press, ABC News, local TV stations and even international news bureaus, including Agence France-Presse. (The Chicago Tribune also reached out, but their interest was in snowy owls in the Midwest this winter.)

The Union Station owl has been unusually cooperative and reliable, perching photogenically on the globe-like top of the Columbus fountain in front of the train station, or the huge brass eagle flagpoles behind it. (The owl, most likely a juvenile female, seems to like the area because of the large number of rats there, although she’s also been seen chasing pigeons.)

Much of the press coverage has focused on how rare a snowy owl is in the nation’s capitol, although snowy owls actually appear in the D.C. area every winter or two — just not usually in such a highly public place. Still, it’s great to have such a high-profile ambassador for Arctic wildlife just down the street from lawmakers whose actions have a direct impact on the survival of snowies and other species. 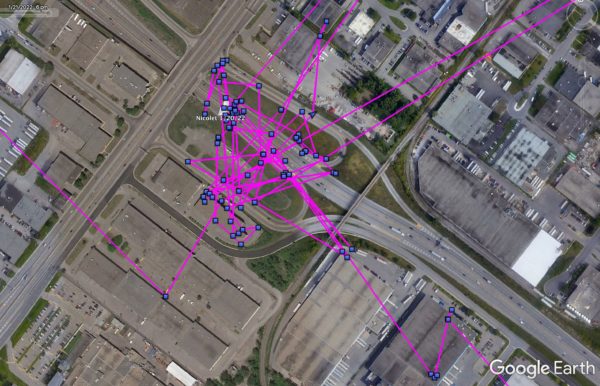 Must be a lot of voles in those grassy highway margins that Nicolet has been hunting. (©Project SNOWstorm and Google Earth)

Of course, we have our own celebrity owls, the ones we’re tracking this winter. Our trio of snowies in the Montréal area have been doing some interesting things. Nicolet, who for weeks had been the poster child for good behavior, remaining near her relocation site on the south shore of the St. Lawrence after being trapped and moved from the Montréal airport, made a sudden, 75-km (40-mile) beeline back to the airport on Jan. 13. She spent the next day poking around the Dorval neighborhood and riding the ice on the river, then moved back onshore and has since stayed just south of the airport, hunting and roosting in an industrial zone with a lot of intersecting highways, distribution warehouses and offices with large grassy areas that we suspect are full of rodents.

Hochelaga, on the other hand, moved from a potentially dangerous urban environment on the island of Montréal to much quieter surroundings across the river to the south, making a 25-km (15-mile) flight the night of Jan. 17-18, then meandering around the south shore farmland near Saint-Jean-sur-Richelieu, near the Richelieu River. 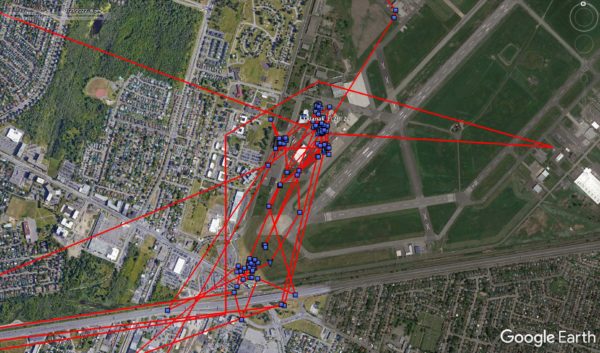 While we wish she’d avoid airports entirely, at least Odanak isn’t spending much time on the runways. (©Project SNOWstorm and Google Earth)

Odanak remains mostly near the Saint-Hubert Longueuil Airport on the south shore opposite Montréal, though she’s also done some exploring, along the waterfront and out on the river ice. While at the airport, she’s mostly avoiding the runways, fortunately. 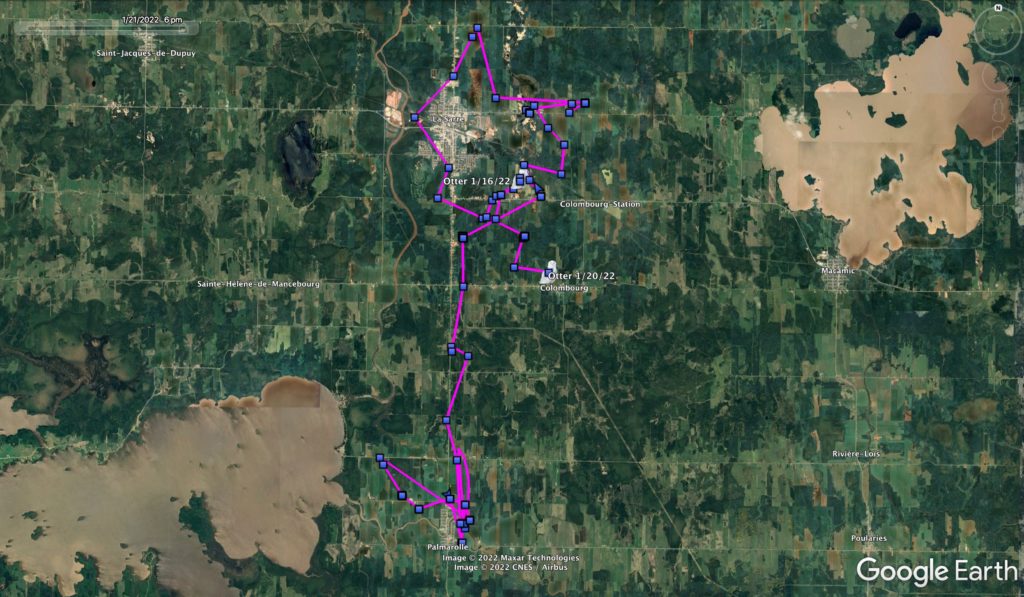 Otter’s been roaming around the sparse farmland — surrounded by deep forest — near Lake Abitibi. (©Project SNOWstorm and Google Earth)

I’m pleased to say that CTT’s troubleshooting solved the problem we’d been having with Otter’s transmitter, and he’s back in regular contact with us, still to the east of Lake Abitibi in western Québec. Most recently, he’s been moving around the vicinity of La Sarre, the seat of Abitibi-Ouest Regional County Municipality. This region is deep in the boreal forest, unfriendly terrain for an open-country bird and a landscape that snowy owls usually just hurry through twice each year. But the area east of the lake in Québec has a lot of small farms among the conifers, and while the acreage of open ground isn’t great — most field complexes are a few hundred hectares at most — it obviously appeals to Otter. (Check out Google Earth and you can see the provincial border, which run north-south through the lake, from space, since there are virtually no farm fields west of the Québec line.) 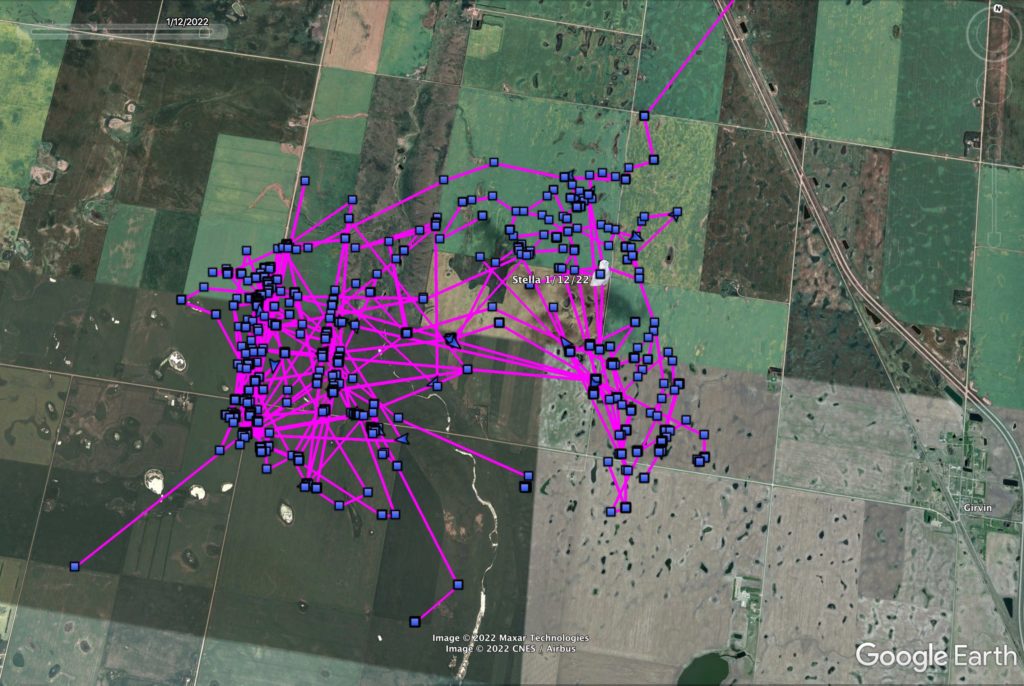 Must be good hunting on the prairies of southern Saskatchewan for Stella. (©Project SNOWstorm and Google Earth)

Stella remains just where she’s been for the past few weeks, on the prairies of southern Saskatchewan between the towns of Craik and Davidson. The same for Wells, who sticks like a tick to her traditional winter territory in Québec City, QC.

The other tagged owls, all of which were returning birds from previous winters, were AWOL this past week — something we’ve come to expect at this time of year. Coming south in the darkest period of the year, and having depleted their battery reserves transmitting their stored summer data, their transmitters often go into hibernation mode in January, usually getting enough solar recharge to periodically collect and store GPS points but not to transmit them.

If past experience holds, we should start getting more regular updates from them as we move into early February, as both day length and solar angle (the height of the sun above the horizon) improve. The latitude of Montréal, for example, will gain more than two hours of daylight by this time next month. All of us here in the cold, dark north are looking forward to that — and not just for the sake of owl transmitters.

Here, or There?
Late Yul-tide Greetings