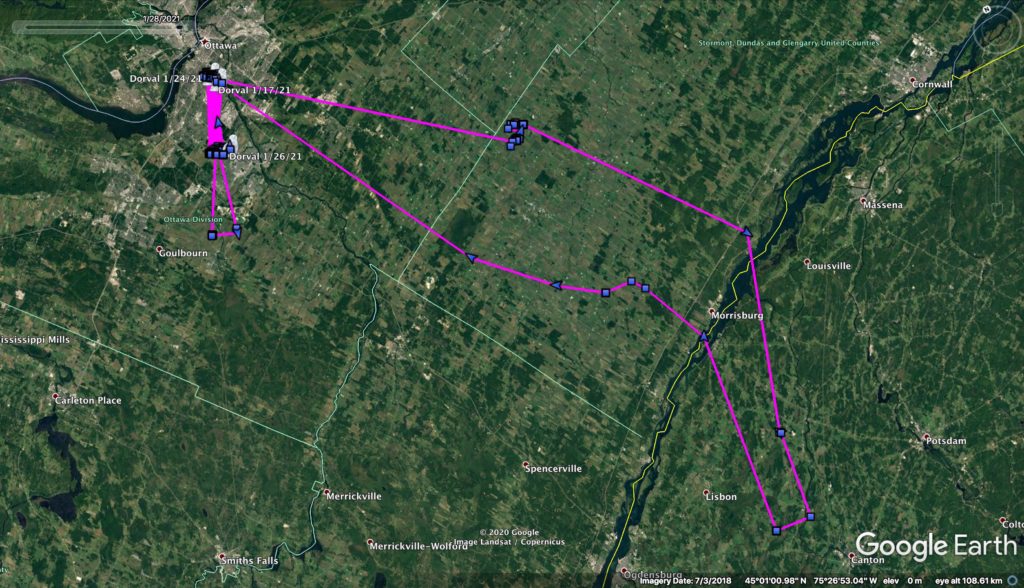 There are no Covid-19 restrictions on snowy owls crossing the U.S.-Canadian border, as Dorval demonstrated. (©Project SNOWstorm and Google Earth)

If you were anywhere near a news feed last week, you know that the biggest snowy owl news didn’t involve one of our tagged birds, but rather the first snowy to appear in New York’s Central Park in 130 years. The owl made a brief appearance on the park’s North Meadows ball fields on Wednesday, Jan. 27, thrilling hordes of birders before disappearing overnight. (I had a chance to talk with CBS News about snowy owls and the risk that climate change poses to them, here.)

While a snowy in Central Park is a rarity, the species is actually regular most winters along the coast in Queens, Staten Island and Long Island, and at metro-area airports like JFK, La Guardia and Newark. And we know of at least one other snowy that visited downtown Manhattan — Baltimore, a young male we tagged in 2015, who on his migration north from the coast of New Jersey that year stopped off on the roof of a 58-story skyscraper next to Madison Square Garden. (It was two in the morning, though, so no one saw him — we only learned of his visit from his tracking data.) Baltimore must not have liked the view, because he quickly pushed on north out of the city. 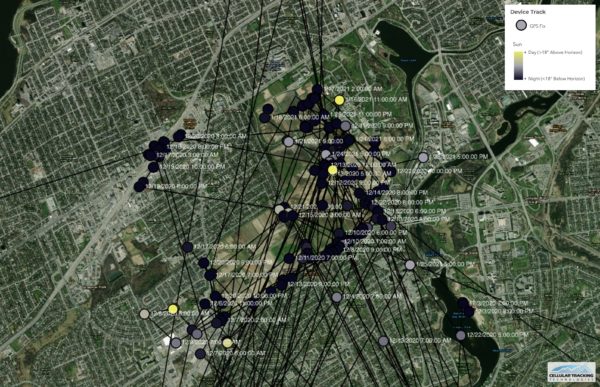 Dorval has been regularly visiting the Central Experimental Farm in Ottawa, but almost always under cover of darkness. (©Project SNOWstorm and CTT)

None of our owls made the evening news, but we have some great updates to share regardless. Our last post noted that we hadn’t heard from Dorval in Ottawa in many weeks, her transmitter having slipped into hibernation because of its low voltage — the “valley of death” for solar recharge at this dark and often cloudy time of year. But shortly after we posted that update, Dorval checked in, and she’s been back on the grid ever since, moving regularly between the Central Experimental Farm in the north, and the former Greenbelt Research Farm 9.5 km (6 miles) to the southwest.

What’s interesting about this commute is that, generally speaking, she’s spending her days at Greenbelt and hunting at night at the Central Experimental Farm, a dichotomy that is most easily seen in our interactive map for Dorval, which color-codes each location by daylight, dusk or night. Almost all the GPS fixes for the Central farm are ink-black nighttime dots.

Most intriguingly, between Jan. 18-21 Dorval made a long foray southeast, across the St. Lawrence and into upstate New York near Potsdam and Ogdensburg — a one-way trip of 88 km (54 miles) before returning to Ottawa. Why leave? And why return? There was a decent snowstorm in Ottawa Jan. 16, followed by windy, much colder weather; that may have prodded her to do a little exploring, and such out-and-back flights aren’t uncommon among our tagged owls.

The Potsdam region has an abundance of voles this winter, which one would think would be attractive to a hungry owl. But there might have been too much competition. SNOWstorm team member Tom McDonald was in that area last week and reported large numbers of rough-legged hawks and northern harriers, to such an extent that they made it hard for him to catch snowies for banding. Whatever the reason, Dorval hightailed it back to Ottawa. 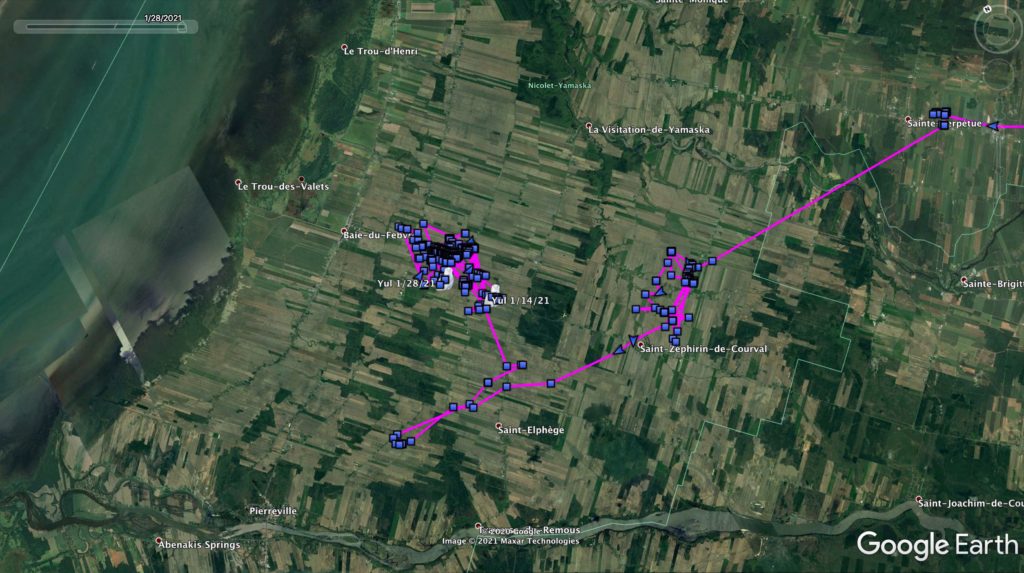 Yul has really burrowed into a small area on the south shore of the St. Lawrence. (©Project SNOWstorm and Google Earth)

Yul is another owl that had been out of touch for a week and a half, but she checked in again last week, and has settled into a very small area in the farming region near Baie-du-Fabvre, on the south shore of the St. Lawrence in Nicolet-Yamaska Regional County Municipality, Québec.  A bit farther south, also on the south shore of the river, Alderbrooke remains near Saint-Hyacinthe, although she, too, took a short walk-about the night of Jan. 25-26, flying 34 km (21 miles) southwest and then returning before daybreak. 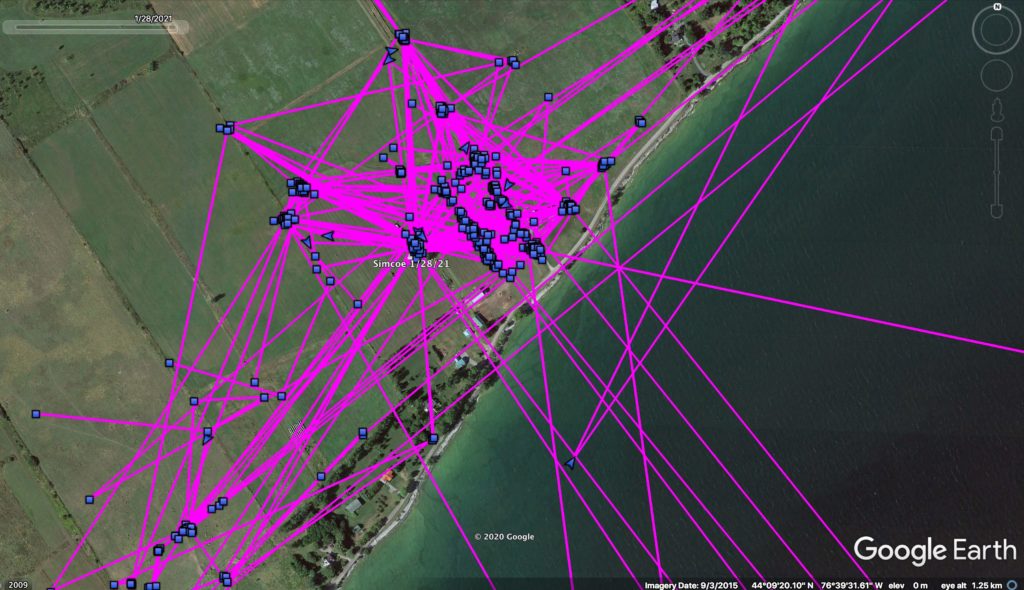 On Lake Ontario, Simcoe has been shuffling around a bit — staying mostly on Amherst Island, but with occasional forays out to some of the small islands northeast of Amherst (the Brother Islands, Snake and Salmon islands) and to huge Wolfe Island to the east. But the bulk of her time has been spent on the south shore of Amherst, especially one farm where she has (judging from the tracking locations) visited just about every fencepost along both sides of a couple of long tractor lanes. Heaven help the local vole population. 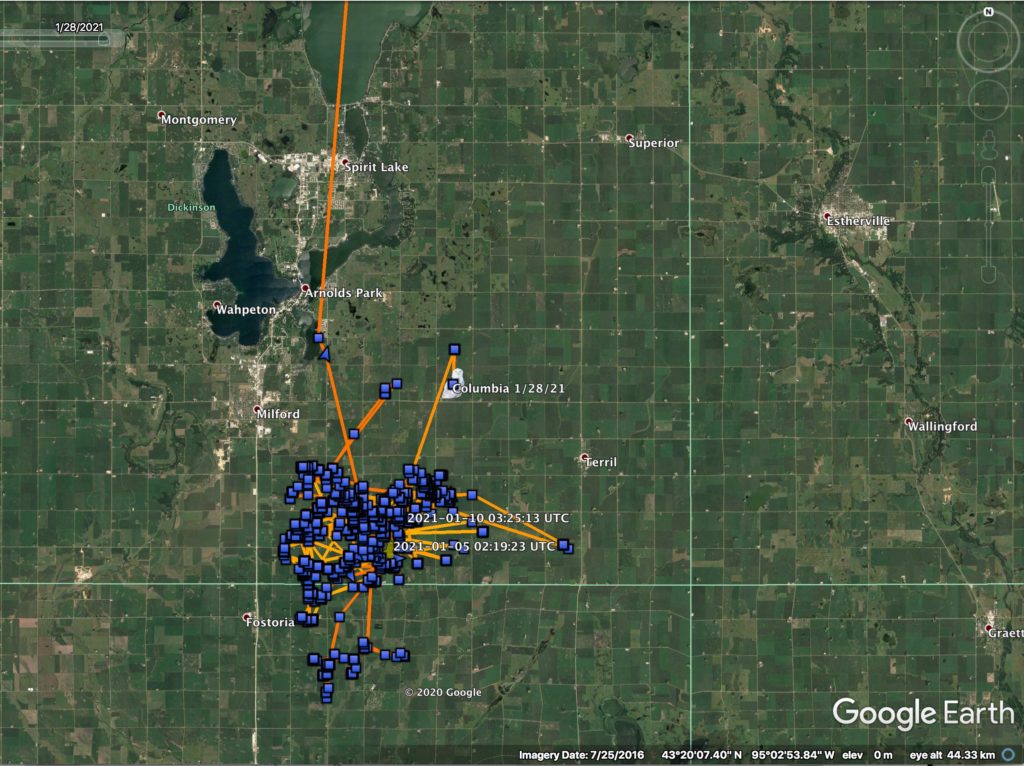 Jumping far to the west, Columbia appears very content in Dickson and Clay counties, Iowa, just southeast of Spirit Lake and Milford. (And speaking of Iowa, I had a great time yesterday discussing Project SNOWstorm and Columbia with members of the Iowa Young Birders and their executive director, Tyler Harms — thanks again for the invitation, folks!) 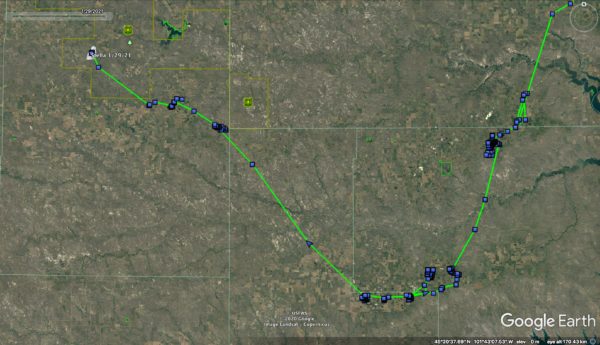 Finally, Stella is the one exception to the rule this winter. While the rest of our birds have found their wintering spots, she has been moving restlessly all winter — unlike previous years, when she, too, found a spot and stuck like a tick. It might be that she hasn’t found a place with a reliably easy food supply, or it may be simple wanderlust. Whatever the reason, after several weeks of stop-and-start movement south and west through the Standing Rock and Cheyenne River reservations in South Dakota, on Jan. 25 she started moving northwest, and for the past few days has been in Perkins County, SD, in the Grand River National Grassland. 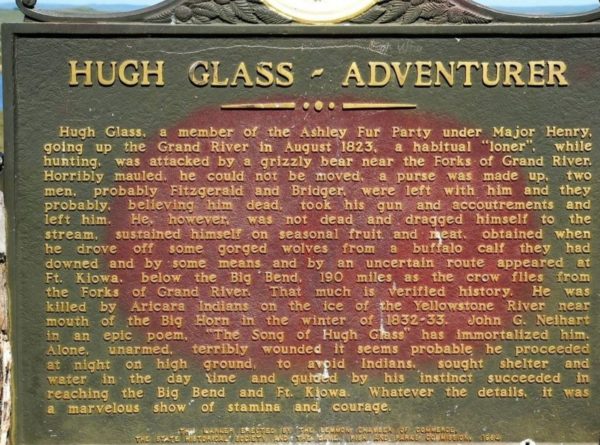 There are two facts about Perkins County that caught my eye. About 15 miles (25 km) due east of her is the site along the Forks of the Grand River (now drowned beneath Shadehill Reservoir) where, in 1823, fur trapper and scout Hugh Glass was mauled by a grizzly and left for dead by his companions on the Ashley Expedition. Glass survived, barely, and literally crawled much of the 190 miles to Fort Kiowa. (A highly fictionalized version of Glass’ story was the basis of the book and movie, “The Revenant.”)

And finally, a couple of days ago Stella was just outside the village of Meadow — which, according to some sources, is the farthest point in the Lower 48 states from a McDonald’s. If Stella has a hankering for a Big Mac, she’s going to have to fly at least 145 miles (233 km). Let’s hope the rabbits and rodents are plentiful there in Perkins County instead.

The Return of Argus
A Whole Lotta News