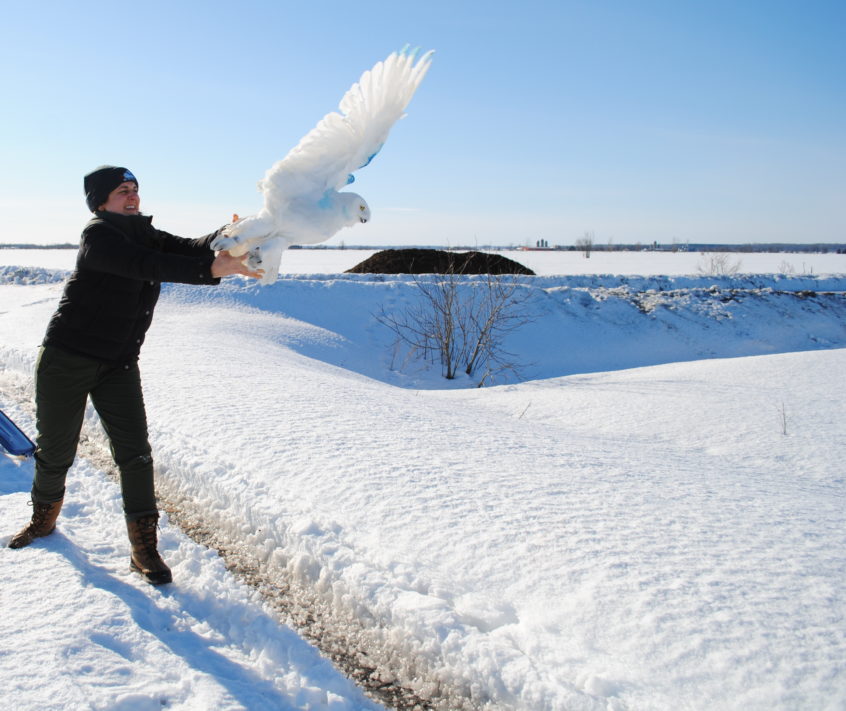 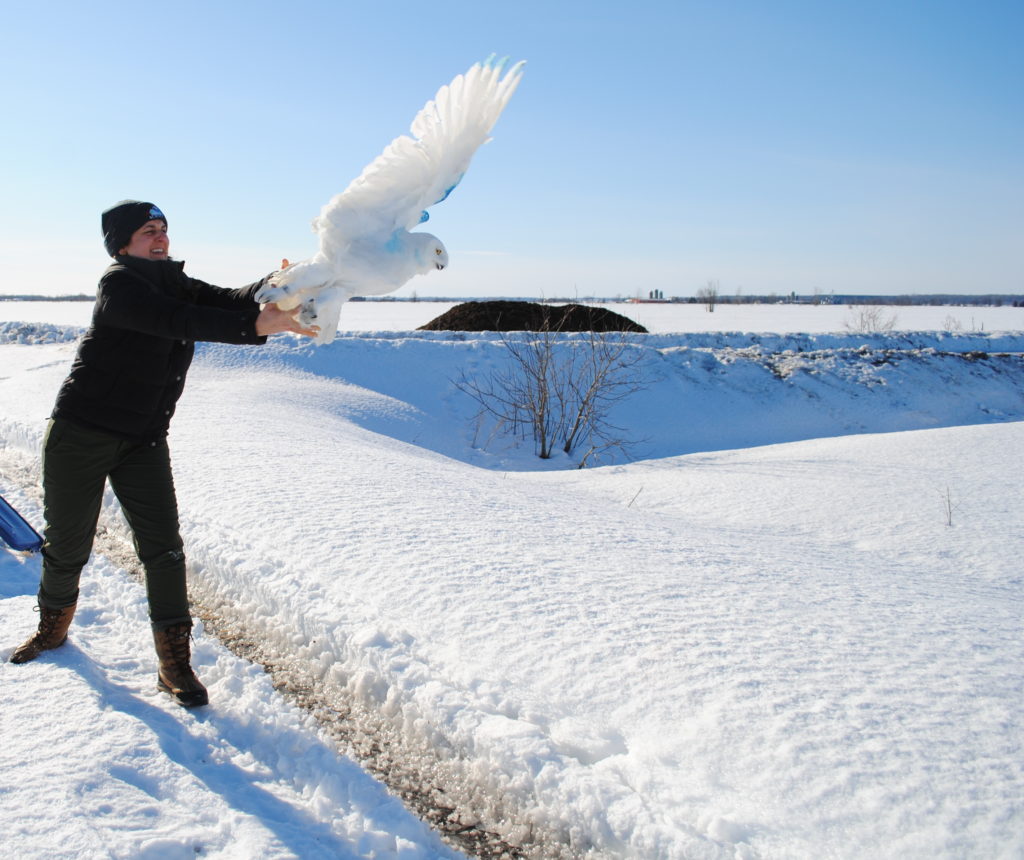 It’s been a cold winter across much of central and eastern North America, especially the regions where we have tagged snowies this year, from the northern Great Plains to eastern Canada. But that’s changing, with some dramatic warming underway, and we’re already seeing the start of the spring migration — with one owl in particular that’s made a big leap north.

We also have a new snowy to add to the roster, only the second newly tagged owl of the winter — a lovely old adult male with a fondness for the Montréal airport. 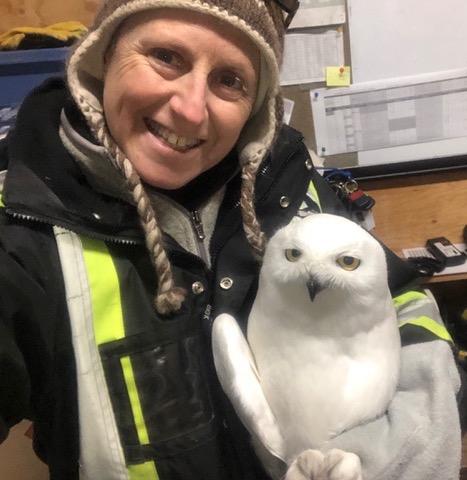 Falcon biologist Julie Lecours with Hochelaga after the old male was caught — almost five years to the day after he was first banded at the Montréal airport. (©Julie Lecours)

We’ll start with our newest recruit, which was trapped by biologist Julie Lecours of Falcon Environmental on March 2 at the Montréal-Trudeau International Airport. Julie immediately realized the bird — a pure white male — was already banded, and records showed Falcon had originally trapped him at the airport on March 4, 2016, by which time he was already mature and almost completely white.

We normally avoid tagging new owls so late in the winter, because our main focus is studying wintering movement ecology and the spring migration is coming up fast. But tagging an old, experienced adult with a history of returning south is good investment, even if this bird migrates soon; he’s a proven survivor, and chances are very good he’ll be back in future winters.

In keeping with our normal nickname protocol, which uses local place names or geographical features — and with helpful input from the Falcon crew — we dubbed this bird Hochelaga, the name (as passed down through French) for the original Iroquoian village at what is now Montréal. 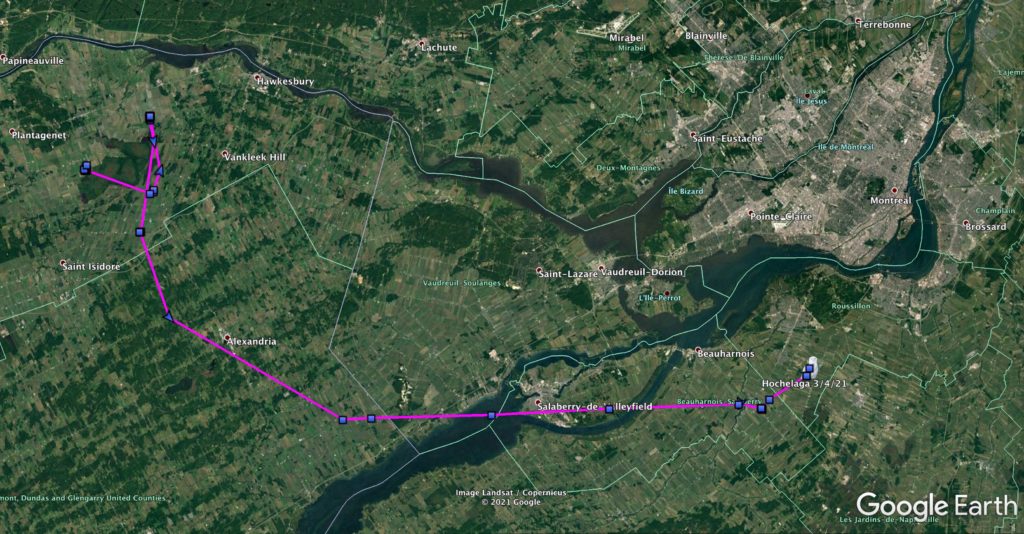 Owl or boomerang? Hochelaga makes a beeline back toward Montréal. (©Project SNOWstorm and Google Earth) 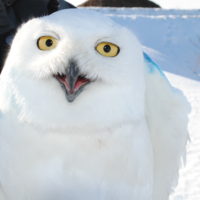 Hochelaga also provides another source of data for Becca McCabe’s PhD research on airport relocations, testing how altering the direction and distance of the relocation affects the likelihood of an owl returning to the airport. She moved Hochelaga a long way, 90 km (55 miles) to the northwest, releasing him in farmland near Alfred, ON. And…he immediately began moving back toward the airport. When Hochelaga checked in Thursday night, March 4, he was just 20 km (12 miles) across the St. Lawrence from the airport, closing in on what is obviously his favorite wintering spot. If he does return to the airfield, Julie and her Falcon colleagues will try to trap him yet again — they added some temporary blue dye to the bends of his wings before his release so he’s easily identifiable at a distance.

We’ll have a map for Hochelaga posted in the next few days.

As for the other owls, Yul and Alderbrooke remained last week where they’ve been all winter, east of Montréal in farmland on the south shore of the St. Lawrence. We had a report Friday of a snowy owl struck by a car near Alderbrooke’s last location; we don’t know if it was her, and the report came after her last data transmission of the week on Thursday night. We hate to see any owl hit by a car, but we’ll be crossing our fingers that tonight’s regular check-in has good news for us, and that she wasn’t the victim.

Dorval remained in Ottawa at last report on March 2, although a day or two later, the folks at Predator Bird Services think they spotted her at the Ottawa Airport, which she’s been avoiding most of the winter. She didn’t check in Thursday night but her transmitter battery has been limping a bit and might not have had enough juice. Simcoe, after spending many days drifting on ice on Lake Ontario (up to 65 km [45 miles] from her winter base on Amherst Island), moved back to the island as the ice broke up and has remained there ever since.

This series of satellite images shows how rapidly the ice broke up on northeastern Lake Ontario from Feb. 17 (left), to Feb. 21 (middle) and Feb. 26 (right). Amherst Island is shown in red. (NOAA CoastWatch imagery) 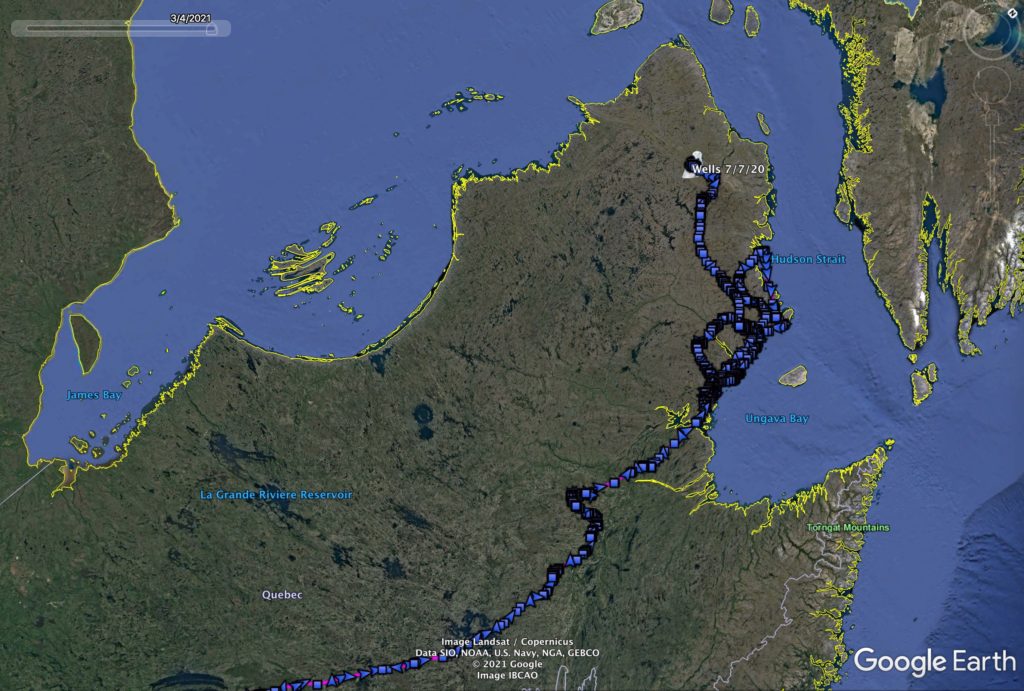 As her battery recovers, we’re getting more and more of Wells’ backlogged data, including these tracks from April-July 2020. (©Project SNOWstorm and Google Earth)

Wells surprised us last week with a large dump of backlogged data, everything from her departure north in April through early July.  We can now say that she appears to have nested last summer in the northern Ungava Peninsula, where a number of other tagged snowies bred last year. (Ironically, we’re still not sure where she is currently, other than somewhere in southern Canada based on the cell network through which she connected. But with longer days and brighter sun we’re hopeful her old battery will continue to recover and we’ll get all of her stored data uploaded and caught up to the present time.) Here’s a map showing all of her movement since she was originally tagged in Maine in 2017, including the four summers during which we’ve followed her: 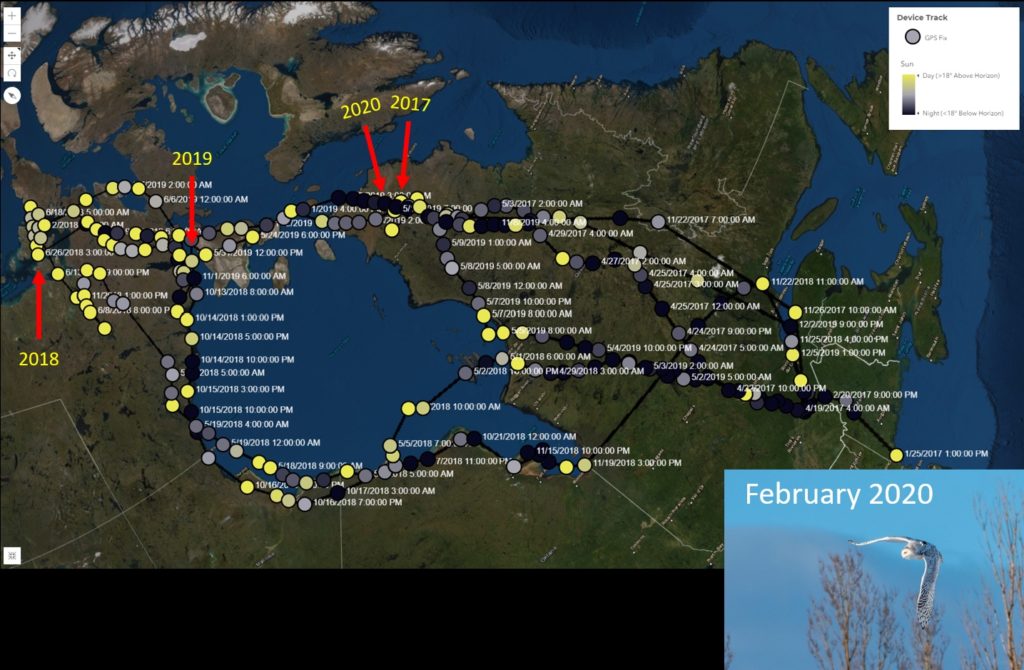 Four years’ worth of data, including four summers (as shown by dates) for Wells. (©Project SNOWstorm) 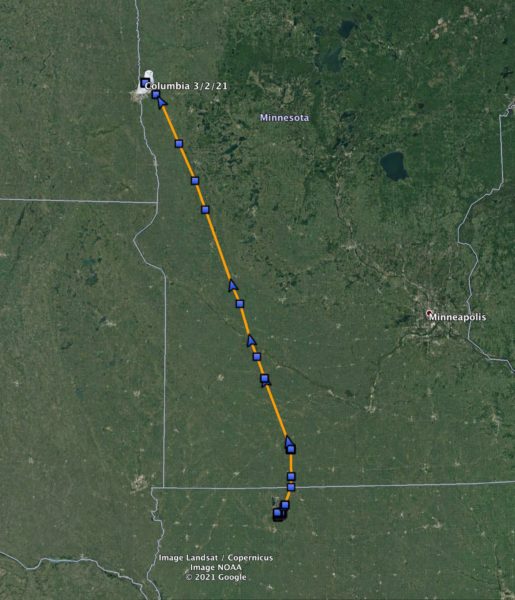 Columbia made the most dramatic migration this past week, leaving her winter territory in Iowa and bolting north. (©Project SNOWstorm and Google Earth)

Out on the prairies, all three of our tagged snowies have been moving north, none more dramatically than Columbia. This owl spent the whole winter in a very restricted area of northwestern Iowa, but on March 1 she started flying north, and by the next day she’d flown 267 miles (430 km) up through western Minnesota to just north of Fargo, though still on the MN side of the border. She hasn’t checked in since, which may mean she’s already moved into poor cell range in Manitoba, because her battery voltage was quite strong.

Stella continued her season-long movements, leaving northwestern North Dakota and checking in March 3 from just south of Lampman, Saskatchewan, in the extreme southeastern corner of the province. About 200 km (125 miles) to her northeast, Argus seems unable to make up his mind — he’s doubled back on himself a couple of times in the past month, moving in a narrow band between SK and MB, near Riding Mountain National Park in western Manitoba. 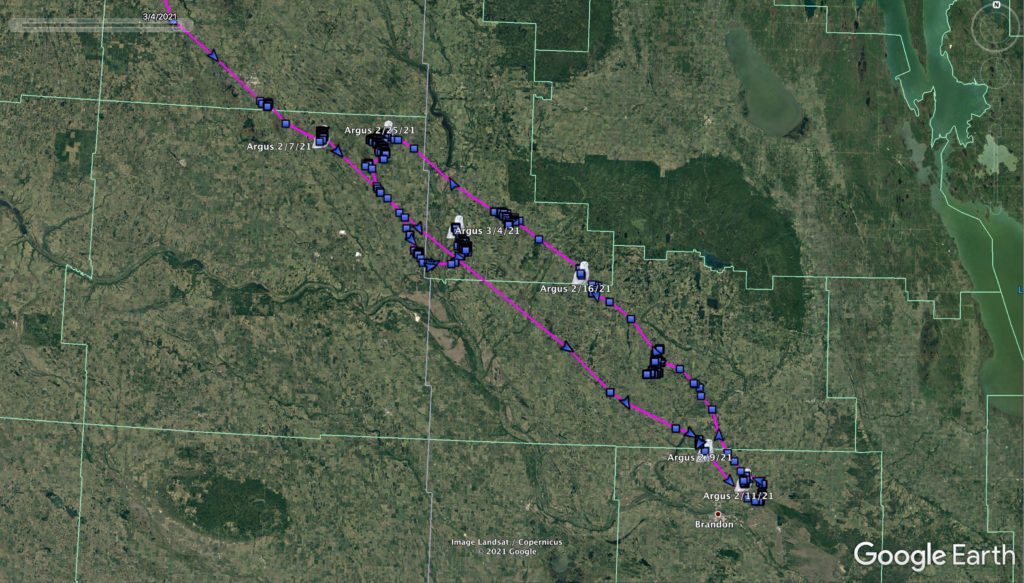 Argus really can’t seem to make up his mind: North or south? East or west? Saskatchewan or Manitoba? (©Project SNOWstorm and Google Earth)

Nudging North
The Return of Argus