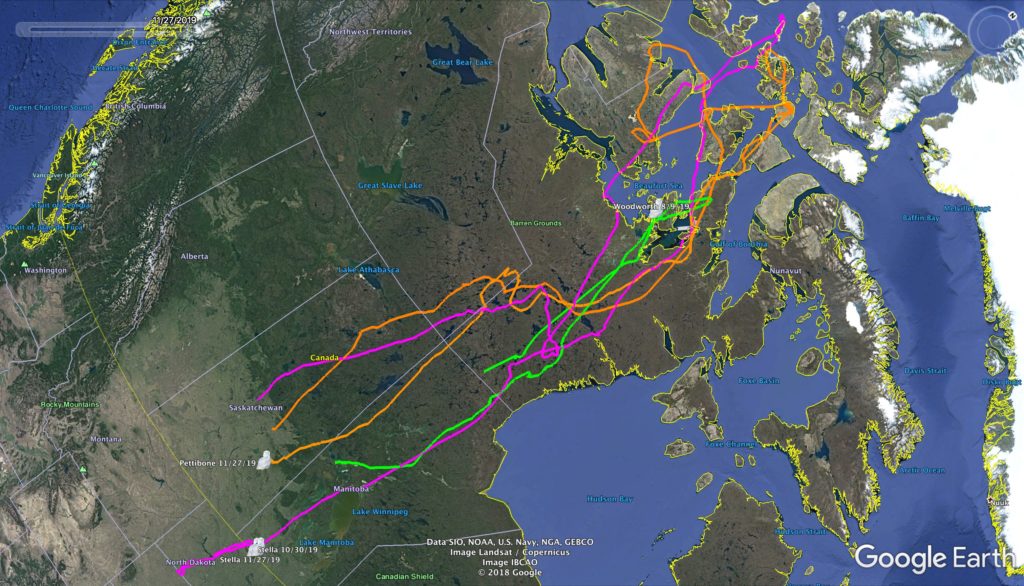 Welcome back to the start of a new season of snowy owl research with Project SNOWstorm! This is our seventh year studying the movements and ecology of these amazing Arctic predators, and it promises to one of the most interesting ever.

We’re delighted to say that things are awfully exciting right out of the gate this year, with a number of returning owls already down from the Arctic, as well as newly tagged birds that are furthering some of our ongoing research goals, a big expansion this past summer of one of our most interesting aspects of our study, and fascinating results from our experiment with new hybrid transmitters. On top of all that, there have already been good numbers of snowy owls showing up in the northern prairies from Alberta to North Dakota, across the Great Lakes into the Ottawa and St. Lawrence valleys, and down the Atlantic coast as far as New York.

We’ll have lots more details about many of those subjects in the coming days, but let’s start today with some of the best news. Three of our tagged birds — Stella, Pettibone and Woodworth — have come back south, bringing with them recorded data that have allowed us to trace their movements over the past seven or eight months in the Arctic.

All three reappeared rather early in the fall. The evening of Oct. 23, I was surprised to get an automatic text message from the servers at CTT telling me that Stella’s transmitter had just checked in — and moments later, so did Woodworth’s. These are among the earliest returns we’ve ever had, part of a significant movement of snowy owls into the northern Plains in October on the heels of some harsh winter weather, including an early blizzard in the Dakotas. Federal wildlife biologist Matt Solensky, who originally tagged both Pettibone and Woodworth, speculated that the owls may have been following a huge migration of waterfowl pouring through the region in October.

Stella (whom we tagged in 2018 on Amherst Island in Ontario) was in southern Manitoba when she first transmitted last month, north of Boissevain and only about 40 km (25 miles) north of the North Dakota line. Her transmitter uploaded thousands of GPS locations that it had been logging since she headed north and out of cell range last April — and those data points told quite a story.

We last heard from her April 11 near Prince Albert, SK, just before she hit the southern edge of the boreal forest. From there, over the next month Stella flew north-northeast, crossing into Nunavut and looping around the western margin of Hudson Bay in late May before angling north though the Queen Maude Bird Sanctuary. Then she crossed to Victoria Island, an immense piece of Arctic real estate the size of England, Wales and Scotland but with a human population of fewer than 2,500 people.

That’s where Stella spent the summer of 2018, but she didn’t stop on Victoria this year. In mid-June she crossed 140 km (85 miles) of icy water to reach Melville Island, and continued on still farther to uninhabited Lougheed Island, one of the most isolated parts of the Canadian Arctic Archipelago. She made one foray out from the northern tip of Lougheed on June 24, toward the uttermost edge of the Canadian Arctic, but turned back to land, having flown more than 3,000 km (1,900 miles) since April. Through July and August she moved slowly south, picking up speed by the end of September and the first weeks of October.

One thing is clear from her constant travel — she definitely did not attempt to nest this year, likely the second year without a nesting attempt. She’s only a three-year-old bird, and while experts aren’t sure at what age snowies begin to breed, they suspect it may not be until about age four. 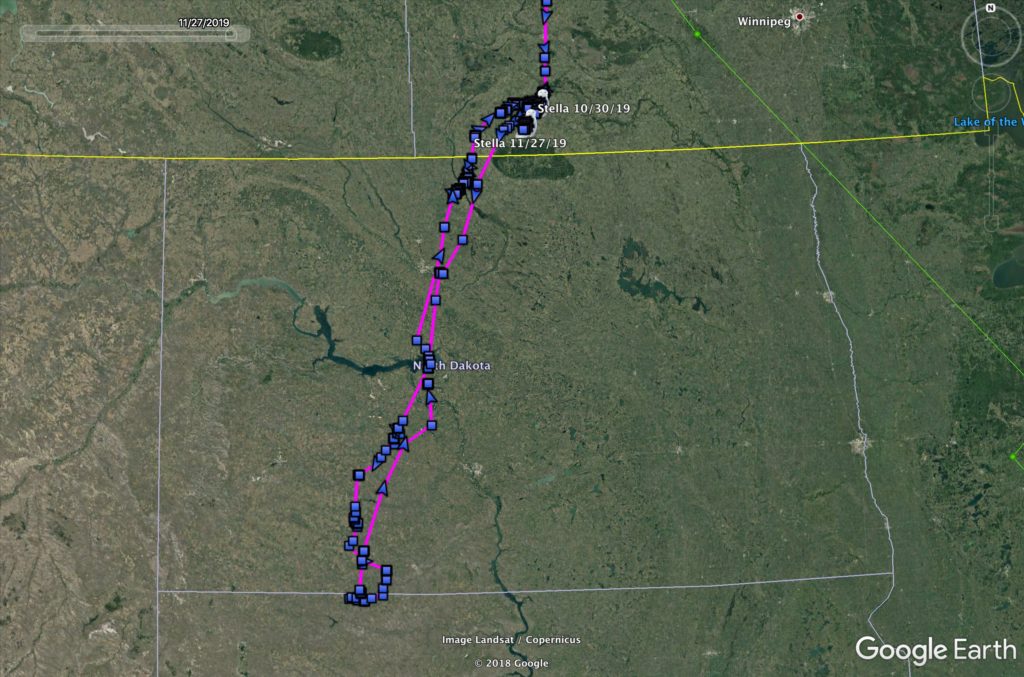 Stella didn’t like something about South Dakota. (©Project SNOWstorm and Google Earth)

Once she hit cell range in Manitoba, she kept moving south, crossing North Dakota and on Nov. 13 stuck her toe into South Dakota, near the town of Lemmon — where something must not have suited, because she hightailed it back north across all of North Dakota into southern Manitoba near Whitewater Lake, where she’s been ever since.

Pettibone, an adult male tagged in North Dakota by Matt Solensky in 2018, showed up Nov. 13 in southeastern Saskatchewan near Kelvington. He’d also spent the summer in the Canadian Arctic Archipelago, wandering around Cornwallis and Bathurst islands — and unlike the summer 2018, when we suspect he nested, this time he showed no sign of settling down in one spot and perhaps provisioning a nest. Like Stella, he was well on is way south by the end of September, and by the time he reconnected with us he’d made a round trip just shy of 6,000 km (3,700 miles). 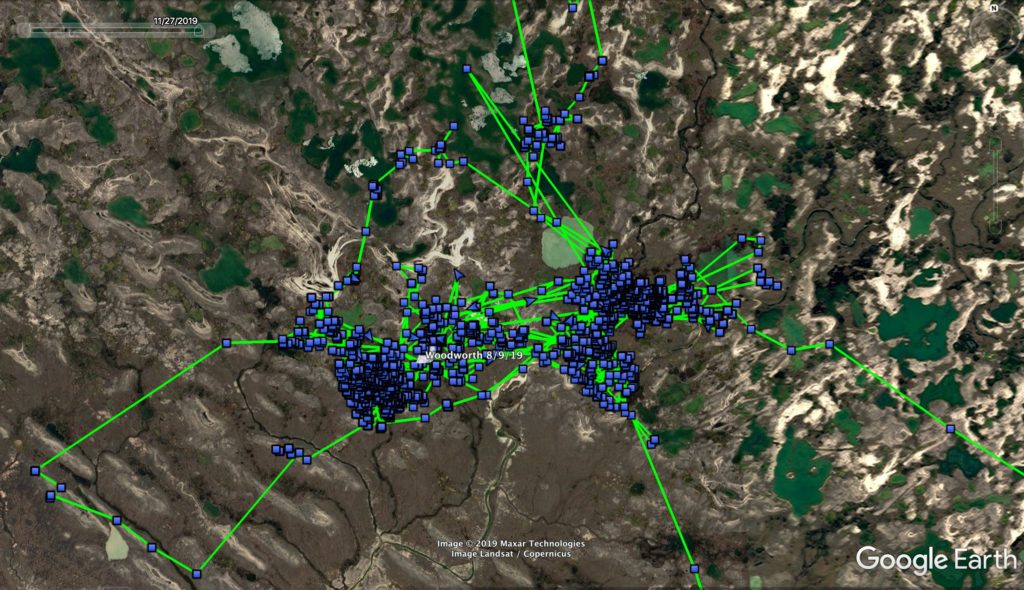 Woodworth settled down on King William Island in the Canadian Arctic this past summer, but the size of his territory suggests this young bird was not breeding. (©Project SNOWstorm and Google Earth)

Woodworth, a subadult male whom Matt caught and tagged last winter in North Dakota, didn’t go quite as far north, stopping on the Boothia Peninsula and then backtracking to King William Island by mid-June. At first glance, his track thereafter looked good for nesting — a huge cluster of hundreds of points — but zooming in on Google Earth, he was covering thousands of acres, with three focal points many kilometers apart — an unlikely pattern if he’d been caring for chicks. Besides, Woodworth is only two years old, which like Stella is probably too young to breed.

Woodworth’s transmitter is struggling with low solar angle and short days, and transmitting almost 9,000 backlogged GPS points drained it enough that it couldn’t tell us exactly where he was at the time of transmission; his last recorded point was in western Manitoba, northwest of the northern tip of Lake Winnipeg. As his battery voltage recovers, we should start getting regular updates from him.

Look for more SNOWstorm updates in the days ahead — as I said, we have a ton of news to share, making this one of the most exciting starts to a season that we’ve ever had.