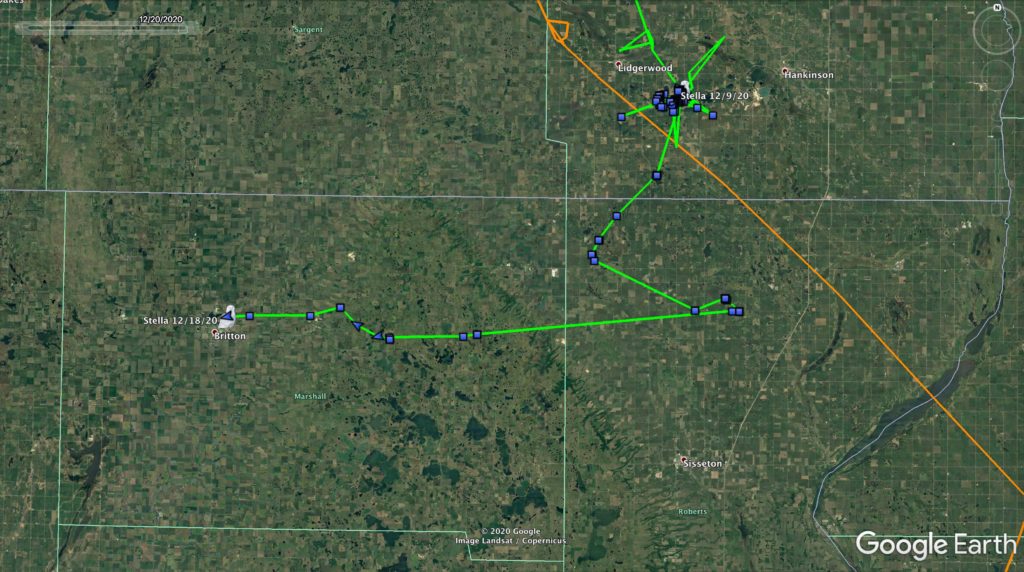 While we were excited to see Redwood come back last week, we were also closely monitoring our other three (so far this winter) returnee snowies — Stella, Columbia and Dorval.

Stella had been off the grid for 10 days, last heard from in Richland County, North Dakota, way down in the southeastern corner of the state near the South Dakota and Minnesota lines. We know from experience that area has spotty cell coverage, so we weren’t too concerned by her silence. 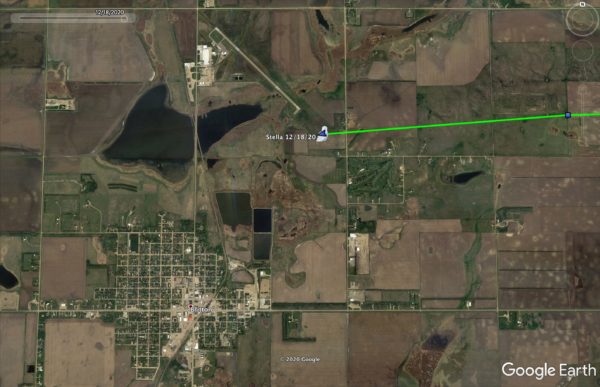 That’s close enough — with all of South Dakota’s wide horizons, there’s no need to hang out at the airport. (©Project SNOWstorm and Google Earth)

And in fact, she checked in on Dec. 18 near Britton, SD, in Marshall County, just a few miles south of the ND border. She had moved across the northern prong of the Coteau des Prairies, a geographic feature we’ve mentioned in winters past — a shallow, triangular plateau aimed at the north, studded with hundreds of natural small lakes and ponds, that split a south-flowing glacier like the prow of a boat during the last ice age.

When she checked in, Stella had just arrived at — wait for it — Britton Municipal Airport, a small, single-runway field. It’s a little frustrating; in a state like South

That’s Stella, but where is her transmitter? In the photos Dan Mason got of her in early December, only a hint of her solar panel is visible. (©Dan Mason)

Dakota, with wide horizons in every direction, she had to pick an airport, albeit a small one. And she was actually a couple hundred yards beyond the end of the runway — but still, we hope she keeps moving to a safer spot. Owls and airports; never a dull moment.

Once we had Stella’s data, we were able to confirm that some photos we suspected were of her — taken by Fargo, ND, birder Dan Mason — were in fact Stella, who was near Gully’s Slough in Richland County at the time. The reason we weren’t sure it was her from the photos alone is that her back feathers were almost completely covering the black solar panel on her transmitter. Some owls habitually preen their feathers over the transmitter, but we didn’t think (based on her good recharge rates in the past) Stella was one of them. Hopefully it was a one-time thing, and not a new habit. 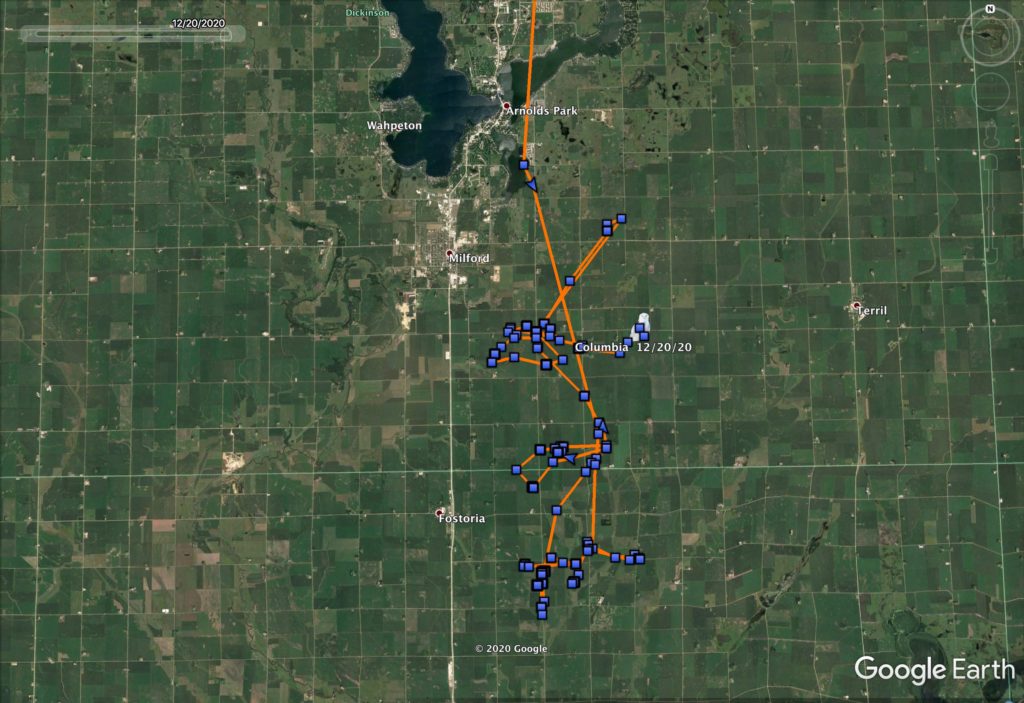 Columbia is an honorary Hawkeye now that she’s in northern Iowa. (©Project SNOWstorm and Google Earth)

Columbia, meanwhile, has become an honorary Hawkeye, having moved from southwestern Minnesota across the border south into Iowa — the first Project SNOWstorm owl to visit the Hawkeye State. We had one near miss previously — in March 2015, another Wisconsin-tagged owl named Goose Pond came within a few miles of the Mississippi River (and the Iowa state line) before disappearing. We never learned what happened, whether he simply had a transmitter failure or, more darkly, a mishap like a vehicle collision that disabled the unit.

We’re pleased to say that Columbia seems to be doing fine, though. At last report she was in Dickinson County just southeast of the towns of Spirit Lake and Milford, and the network of natural lakes known as the Iowa Great Lakes, including 5,700-acre (2,300 ha) Spirit Lake. Over the past week, Columbia’s been hunting farmland on the Dickinson/Clay county line. No airports in sight. 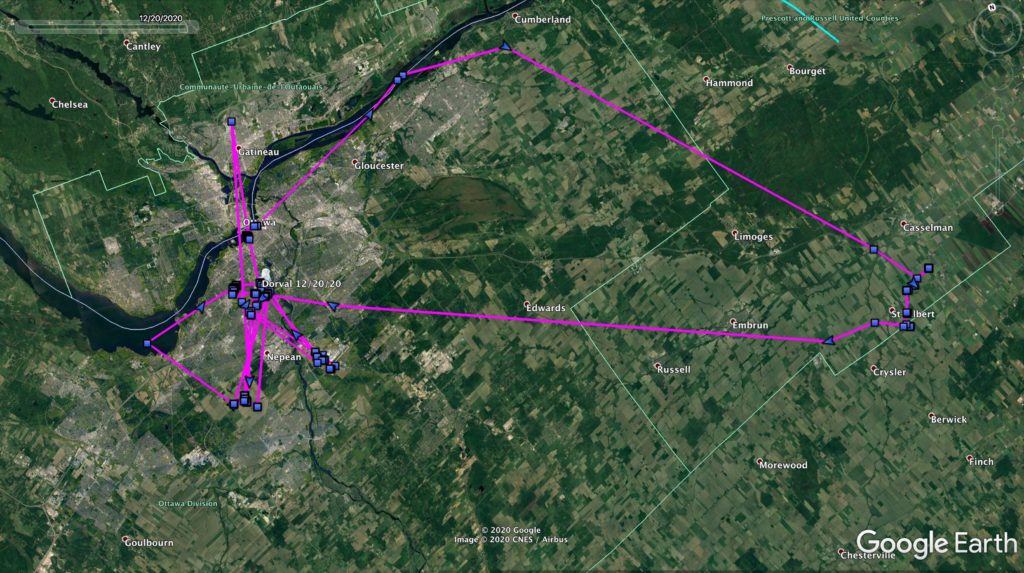 Dorval took a break from her city sight-seeing to make a 50 km flight east of Ottawa. (©Project SNOWstorm and Google Earth)

That’s not been the case with Dorval, over in Ontario. As we reported in our last update, this adult female remains in Ottawa, including a worrisome amount of time at the Ottawa International Airport — but she’s certainly been seeing the sights all over the city. She continues to hunt around Central Experimental Farm, about 6 km (4 miles) from the airport. But Dorval has also spent time along the Ottawa River at LeBreton Flats Park, the National Holocaust Museum, and has flown out to Chaudière Falls, the spectacular series of cascades between Ottawa and Gatineau, QC. 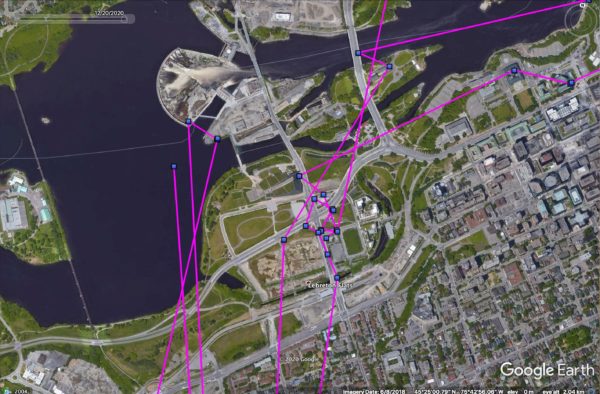 Among other local sights in Ottawa-Gatineau, Dorval has checked out LeBreton Park and Chaudière Falls. (©Project SNOWstorm and Google Earth)

For the most part, Dorval had been roosting by day at the airport, then moving north to hunt at the experimental farm or west to the former Greenbelt Research Farm, which like the experimental farm is a large expanse of ag fields largely surrounded by residential neighborhoods. But more recently she’s steered clear of the airport, and Dec. 18-19 she explored a farming area about 50 km (30 miles) southeast of Ottawa near the town of Casselman, before returning to the experimental farm. Maybe city life is just too exciting to leave behind.

4 Comments on “A Quick Update”