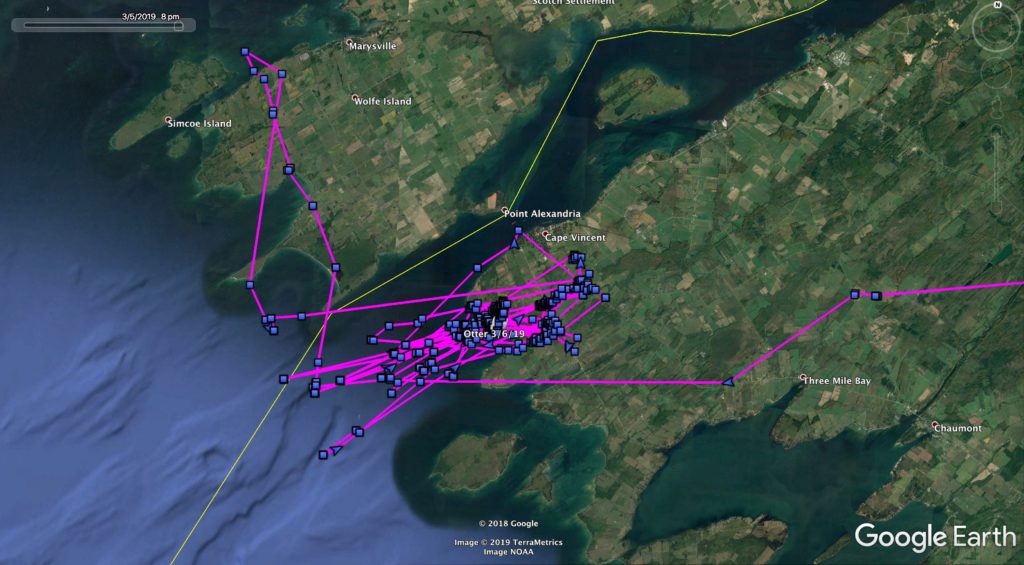 Otter’s movements on and off Lake Ontario, where he must have had a wild ride last month. (©Project SNOWstorm and Google Earth)

In the last update we noted how, in the wake of ferocious winds, insanely high waves and “ice tsunamis” on Lake Ontario, we’d been worried that Otter (who had moved out onto the ice at the lake’s eastern end a week or two earlier) hadn’t checked in.

Looks like our fears were unfounded, though, because this adult male moved back to land and has been transmitting data regularly as he shifts around the Cape Vincent area of upstate New York, close to the entrance to the St. Lawrence River and Thousand Islands area. At the end of February Tom McDonald (who tagged Otter) was back in that area, and realized looking at the data later that he’d been within a few hundred yards of the bird, who was using a remote point.

“Snowies love it because nothing in the world bothers them there and they have a commanding view of the lake and the nearby bay. Had I been able to get in there, I would have surely run right into him,” Tom said.

Both Otter and Seneca (who remains just southwest of Geneva, NY, near the top of Seneca Lake) have had their Argos satellite functions enabled, so that even when they’re out of cell range we should be able to keep track of them. We’ll have a more detailed post in the near future from our colleagues at CTT discussing how these next-generation hybrid transmitters work.

From east to west, Pickford is still roaming the sea ice between Cape Breton and Prince Edward islands, though the past few days she’s been off Rollo Bay at the eastern end of PEI. As has been her habit the past two winters, Wells is spending a lot of time along the busy riverfront Autoroute 440 (Dufferin-Montmorency) in Quebec City, perching on street lamps and watching the St. Lawrence. Farther west up the St. Lawrence valley, Island Beach remains along the Richelieu River east of Montreal.

There’s not a lot of movement to report from the Midwest and plains. Plainfield is really focusing her attention on half a dozen huge fields south of Plover, Wisconsin, that are irrigated in summer by center-pivot rigs; must be good hunting there. Argus has been wandering a little around northern Nobles County, Minnesota, but nothing like the hundreds of miles he moved earlier this winter. Similarly, Woodworth (3.5 km/2 miles north of the U.S./Manitoba border), and Pettibone in southern Saskatchewan, have been content to stay put in recent weeks. They are being typical snowy owls, having finally found places with food and seclusion and not moving — until spring and the migratory urge starts to kick in, in the coming month or so.

We wish the news was as reassuring from Alaska, regarding the three juveniles that SNOWstorm team member Jean-François Therrien tagged in August with our colleagues from the Owl Research Institute. The last good fixes we had from their satellite transmitters were in December, showing all three owls still in the Arctic, two along the coast and one inland. Since then, we’ve had a single transmission from only one transmitter, and it did not include a usable location fix. J.F. is trying to remain optimistic, but the odds are good that three have not made it through the Alaskan winter — which, if true, is sad but important information, as we try to learn more about movements and survival rates in young snowy owls.