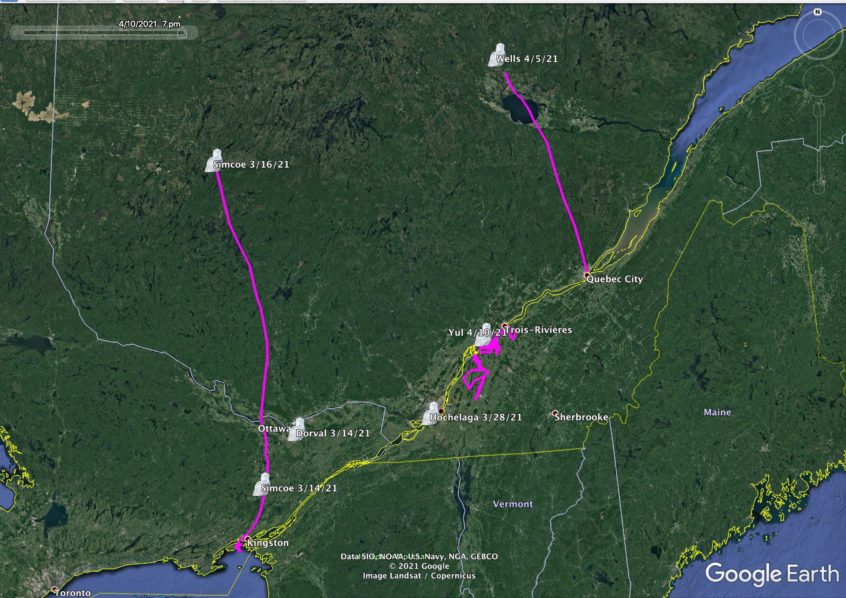 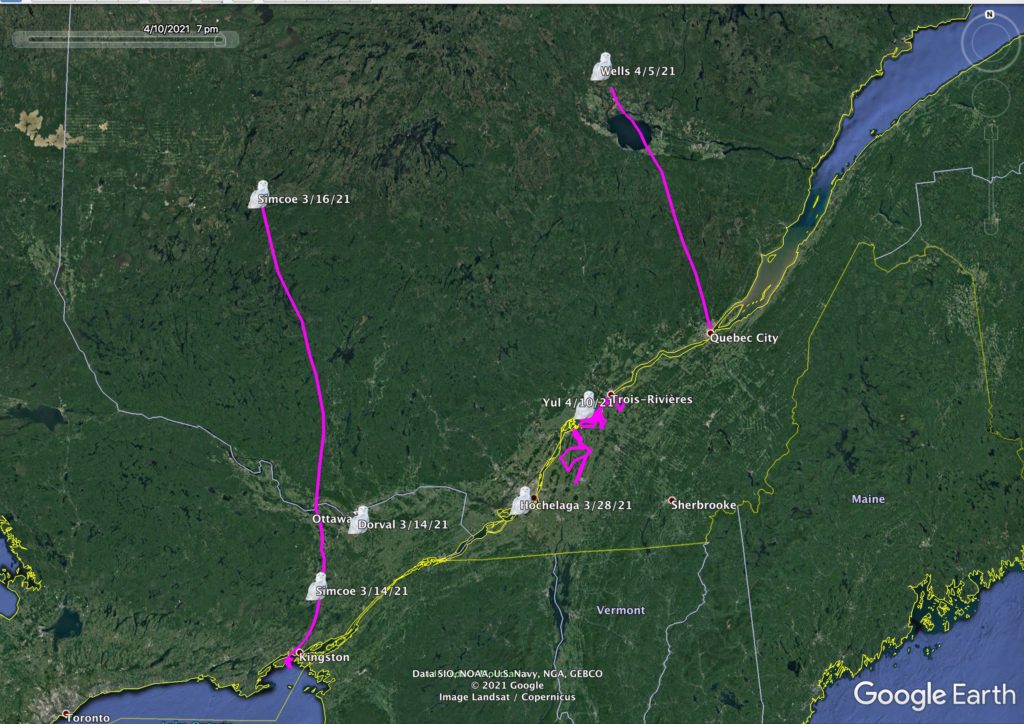 The eastern cadre of tagged owls includes two — Simcoe and Wells — who have obviously started their migration north. (©Project SNOWstorm and Google Earth)

Even though it’s snowing today here in New Hampshire, in recent weeks spring has been pushing hard into much of the northern United States and southern Canada, and with its arrival many of our tagged owls have been on the move. A few — as happens every year — simply vanished, likely having moved rapidly from their winter territories and into regions with spotty or absent cell coverage. And one old friend who’d been AWOL all winter popped back on our radar.

(By the way, I need to apologize for the long interval since the last update — a lot of non-SNOWstorm stuff has kept me occupied. Thanks to everyone for your patience.) 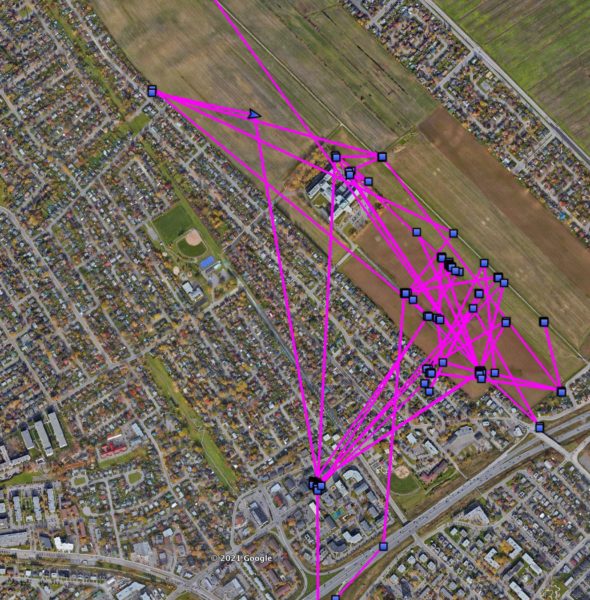 Wells’ movements in late March, when she was back (for the fourth year) in Québec City. (©Project SNOWstorm and Google Earth)

Starting in the east, over the past few weeks we finally got caught up-to-date with Wells, whose old, now flagging battery has been struggling even with springtime sunshine. But we have all of her old 2020-21 data, and once her current locations started coming in we learned that, no surprise, she was back in Québec City once again for the winter, using some of her old haunts, including the sprawling Sisters of Charity convent and farmland, a huge block of green space in the city.

It seemed as though we’d no sooner caught up with all of Wells’ winter movement than she began moving north on April 3. Two days later, the last transmission we had from her, she was northwest of Lac Saint-Jean, following very closely the route she took in 2017, 2018 and 2019. (Last spring she was just a bit farther east.)

Yul began to get restless in late March, moving from her very small winter territory in the farm fields on the south shore of the St. Lawrence and out onto the river ice and shoreline. April 4 she flew across the river, and she was on the north shore near Yamachiche, QC, when she last checked in April 10.

Alderbrooke, who had moved fairly close to Yul’s old site, hasn’t checked in since April 1, and may have moved north quickly enough to evade cell signals. Similarly, Hochelaga hasn’t checked in since March 28, when he was still hanging around the Montréal airport and the nearby highway, Route 40/Autoroute Felix-Leclerc. In this case, we hope the radio silence means he left, rather than being knocked off the air by a vehicle or plane collision. Likewise with Dorval, whose last check-in from Ottawa was March 14.

Perhaps not coincidentally, March 14 is also when Simcoe departed Amherst Island, rapidly migrating north, passing west of Ottawa and into southwestern Québec. On March 16 she was 70 km (43 miles) east of Val-d’Or, QC, deep in the boreal forest, and we’ve not heard a peep from her since. 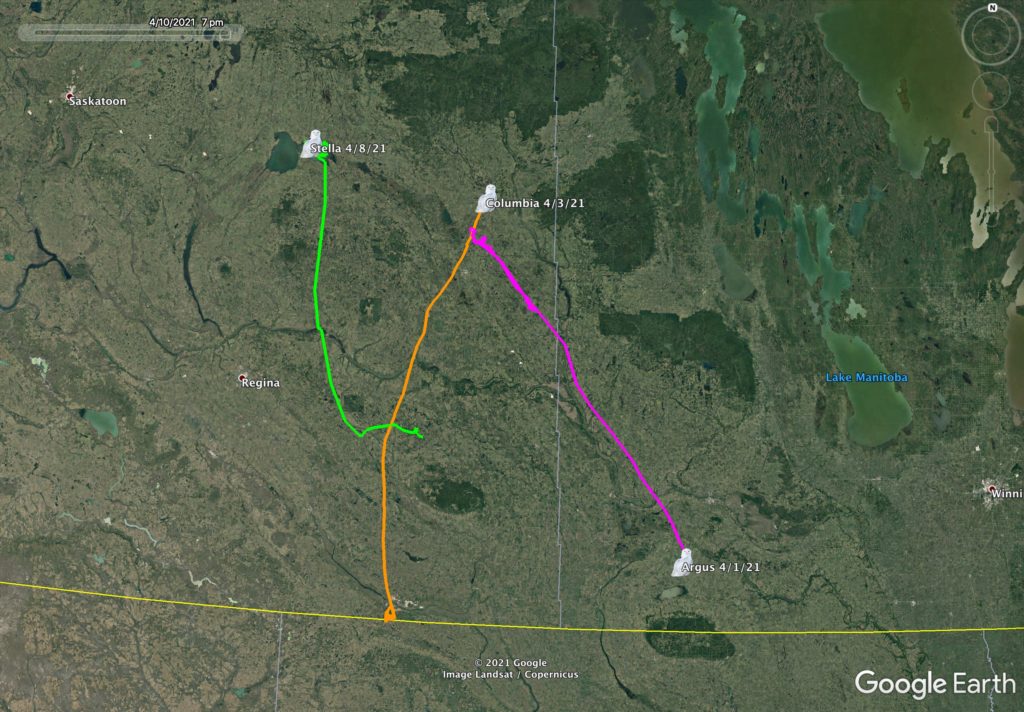 Jumping out to the prairies, all three of our tagged birds were still on the grid in early April — and one of them was actually heading south.

Stella, who had been near Kipling, SK, in mid-March, moved 263 km (163 miles) west and north to the Quill Lakes, an internationally important wetlands complex in southern Saskatchewan where other SNOWstorm owls have paused in their migrations in the past. Her last transmission there was April 8, so there’s a chance she may check in again — or she may have bolted north beyond the prairies and into the boreal zone.

Columbia, who had been near the North Dakota/Saskatchewan border since mid-March, began flying north April 1, and by April 3 was northeast of Canora, SK, in Division No. 9. No word from her since, so she’s likely moved up into the boreal forest and off the grid. Her path crossed that of Argus, who had been in Division No. 9 in late March — but by the time Columbia came through, Argus had flown a surprising 283 km (176 miles) southeast, and by April 1 he was just north of Whitewater Lake in Division No. 5, SK, close to where Stella spent last winter. Nothing from him since then, and given his recent behavior, I’m not about to try to predict where he might be by now.

Finally, we have an update on an old friend who never showed up on the cell grid this winter — Otter. This adult male was equipped in January 2019 with a hybrid GSM/Argos satellite transmitter (from which he apparently ripped the Argos antenna sometime thereafter). He spent the winter of 2019-20 southeast of Montréal, close to where Yul and Alderbrooke were this winter, but never appeared last autumn as we’d hoped, and his last Argos transmission was in late September, when he was still on Baffin Island. 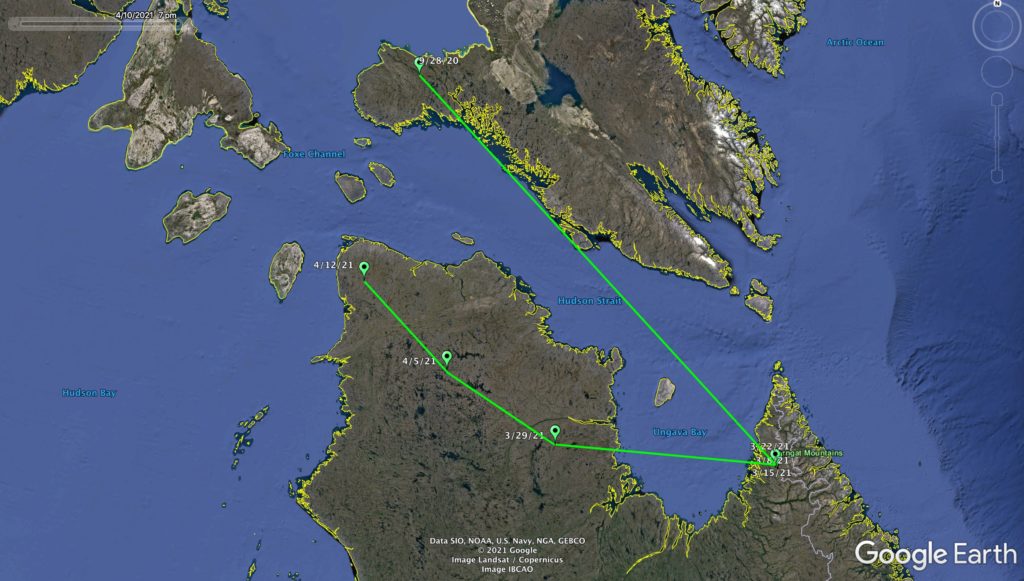 Otter’s movements from late September on Baffin Island, to March and April moving from the Labrador Peninsula west to the Ungava Peninsula. (©Project SNOWstorm and Google Earth)

Well, no wonder we never heard from him — Otter wintered a very long way from any cell tower, in the northern Labrador Peninsula just west of the rugged Torngat Mountains. We learned this in early March, when his Argos satellite transmitter began connecting again on a weekly basis — sending a cluster of GPS locations every Monday. Since then he’s flown west across Ungava Bay, and is now near the northwestern tip of the Ungava Peninsula. (These Argos GPS fixes don’t automatically feed into Otter’s interactive map on our website, unfortunately, so you won’t be able to track him via his satellite transmissions.)

In the summer of 2019, Otter migrated all the way up to the Brodeur Peninsula at the northwestern corner of Baffin Island, while last summer he was on the Foxe Peninsula at Baffin’s southwestern extreme. Where is he heading this year? The Ungava was a breeding hotspot for owls last summer because of high lemming numbers, but that’s unlikely to be the case two years in a row, and I suspect he’ll continue moving north, likely back to Baffin.

Because of a programming hiccup, Otter’s Argos transmitter appears to be turning itself off at the end of September, and back on at the beginning of March. Had he been south in cell range that wouldn’t have mattered, because his GSM transmitter would have sent us the usual constant stream of data. But of course this year he wasn’t in cell country, and we lost the chance to track him for five months. (Assuming there was enough winter daylight up there in the subarctic to charge his battery — not a sure thing.) We have a new duty cycle, with year-round Argos tracking, cued up for his transmitter to take — but that is going to require him to be within cell range to connect via the GSM network. Maybe we’ll get lucky, and he’ll hang around one of the remote bush communities on the Ungava like Ivujivik or Salluit that have increasingly have cell towers.

3 Comments on “A Springtime Push is Underway”