Over the years, we’ve seen snowy owls — both our tagged birds and unmarked owls — get into a variety of problems. We’ve had tagged owls killed by collisions with vehicles and planes, electrocuted on poorly designed power lines or die from flying into them, drowned by nor’easter storms on the coast, or mangled by the powerful backwash of jet engines. Last winter one owl, Manisses, died from an unusual parasitic infection that killed many other owls on Block Island, RI.

But Coddington, who was tagged Jan. 3 on the Buena Vista grasslands of central Wisconsin by Gene Jacobs, got himself into a whole new kind of trouble — at least, new for us, but possibly a growing issue for raptors.

Saturday night, Jan. 20, I got a call from Marge Gibson, who runs the Raptor Education Group Inc., a very well-respected raptor rehab center in Antigo, WI. Earlier that day, a snowy owl had been rescued by a farm family from their barn south of Plover, WI — an owl with a transmitter on its back, and with my contact information on the transmitter. 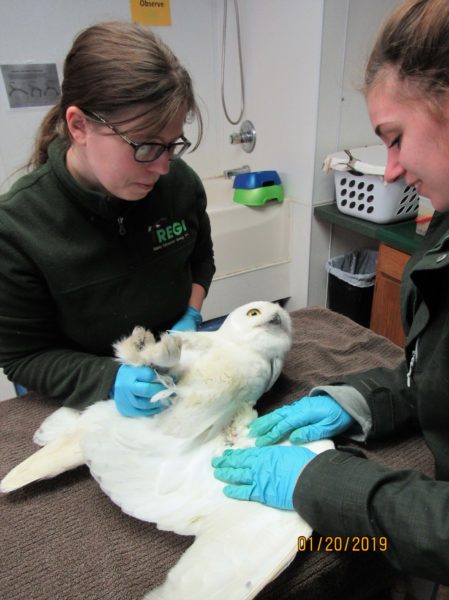 It was Coddington, of course, who had been hunting the ag lands and remnant prairie south of Plover since his release three weeks ago. We’d already been a little concerned about him, because he’d been hanging around a large potato-processing factory — and where there are commercial food processing plants, there is often rodenticide being used. But Jan. 17 he flew northeast to the town of Plover itself, stopping for a while at the Crossroads Commons mall, then looped south into what was (at least since we’ve been tracking him) new ground. By Jan. 19, he was hanging around a farm south of the village of Arnott — and probably while chasing prey he ended up inside a large barn with plenty of manure.

That’s where he was found and rescued the next day by farmer Brian Biadasz, jammed between a wall and a water font, and taken to Marge’s rehab facility. If the idea of an owl gooped up in manure mostly just sounds gross, Marge explained it’s a lot worse than that. “The digestive enzymes used in the [manure treatment] process dissolve the bird’s down feathers,” she explained. Coddington’s not the only victim — in fact, he’s the second manured snowy that REGI has received just this month. They’ve treated other 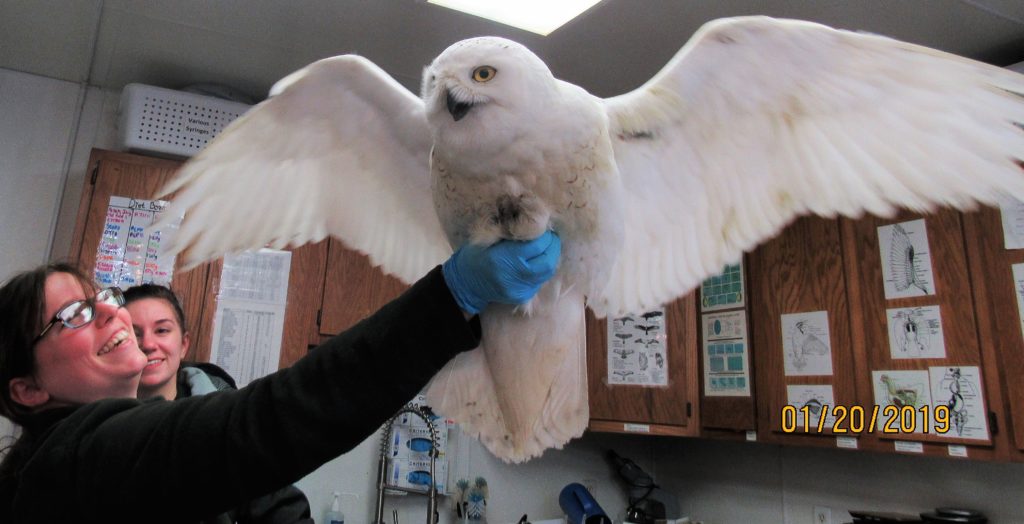 …and they check to make sure he has full extension and mobility. (©Raptor Education Group)

species of owls in the same predicament, as well as a bald eagle that got into a sewage treatment plant lagoon. Nor is this the first time the Biadasz family has found snowies in their barn. 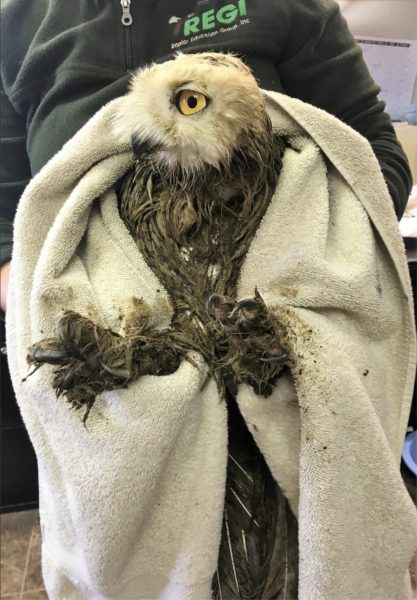 “The great news is he did not have a lot of the manure, and what there was had not saturated the feathers as the other SNOW we admitted in early January. His eyes and face are clear of exposure,” Marge said. (You can see from this photo from REGI’s Facebook page, that owl was up to its neck — literally — in liquid manure.) Even better, she determined from the Brian that the manure to which he’d been exposed was just that — plain cow manure, not the liquified stuff treated with digestive enzymes to break it down, “so the feather damage and tissue burns will be less,” she said. “He was found and transported to us quickly so the manure was not in contact with his feathers and skin for an extended period.”

One wing was banged up, and Marge initially feared he might have had a radius or ulna fracture, but his X-rays were clear. Coddington was also somewhat underweight, which probably wasn’t tied to the manure; REGI checked to make sure he hadn’t ingested lead, but we’ll be working with them on more extensive blood toxicology tests. At least at this point, Marge hopes he’ll be back in the wild in a few weeks.

The transmitter, which was funded by Madison Audubon, originally deployed last year on Arlington and refurbished after that owl was killed by a vehicle on his way north, was removed — even if Coddington needs only a short stay at REGI, he’ll do best without any additional burden. Gene Jacobs will try to use the transmitter again — perhaps third time will be the charm.

Clean as a whistle: No signs of a fracture on the suspect left wing, just some swelling and bruising. (©Raptor Education Group)

Whenever one of our tagged birds gets into trouble, the bad news is mitigated somewhat by the knowledge that we’re learning more about the spectrum of threats these Arctic birds encounter down here. That’s certainly the case with Coddington, and what may be an unrecognized threat to raptors in general.

We’re grateful to the Biadasz family for rescuing Coddington and getting him to REGI, and we’re especially grateful to Marge Gibson and all her small but dedicated staff, not just for their help with Coddington, but for the great work they’ve done for years helping raptors and educating the public. If you’d like to show your gratitude as well, please consider making a donation to the Raptor Education Group, because like us, they’re a nonprofit whose work is supported entirely by donations from the public.

7 Comments on “A Tough (and Smelly) Break”