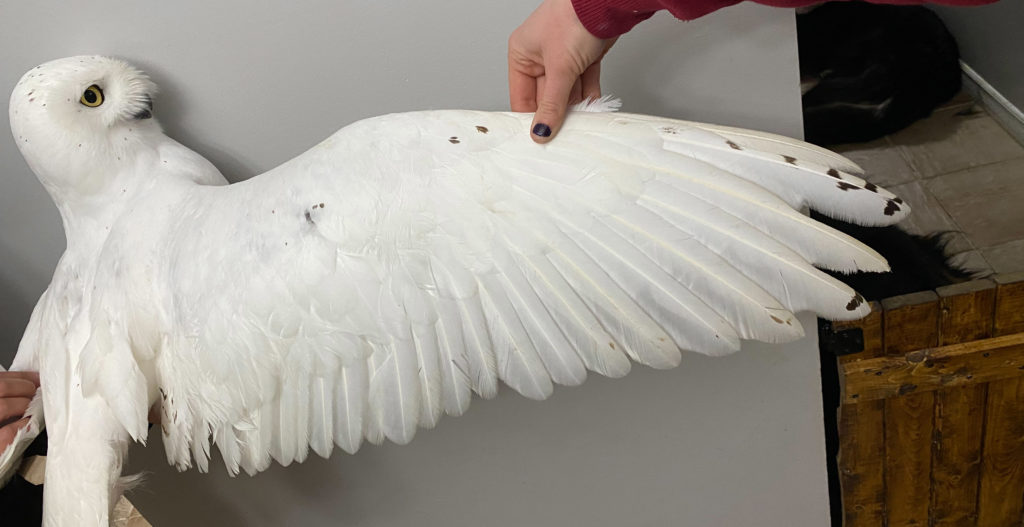 By comparing Redwood’s flight feather molt pattern a year after he was originally banded, we get a better sense of the molt sequence in adult snowies — and thus improve our ability to age them in the hand. (©Steph Boardman)

Whew! Where to start?

It’s been a crazy couple of weeks, and we have a lot of news to cover since the calendar flipped over to 2021. One owl has gone AWOL, one has been recaptured and relieved of his transmitter, and another old friend unexpectedly sent up a signal flare.

Let’s start with Dorval, who had been wintering in and around Ottawa, including periodic visits to the airport. The folks at Predator Bird Services, who provide avian control at the airport, trapped her on Christmas Eve on the airfield, holding her overnight until bander Marcel Gahbauer was able to check her out, take measurements and then get her relocated. (Marcel is an old colleague of ours from his years of banding northern saw-whet owls.)

Unfortunately, they did not realize that the voltage on Dorval’s battery was about to tap out; she’s one of those birds who likes to bury her transmitter down in her back feathers, and we’re entering what we think of as the annual “valley of death” for solar recharge — short northern days, low sun angle, and a lot of winter clouds in the Ottawa River valley. Once her transmitter voltage dropped below about 3.6v the unit went into normal hibernation, and it will take some sustained sun to bring it back — but it should do so before long. 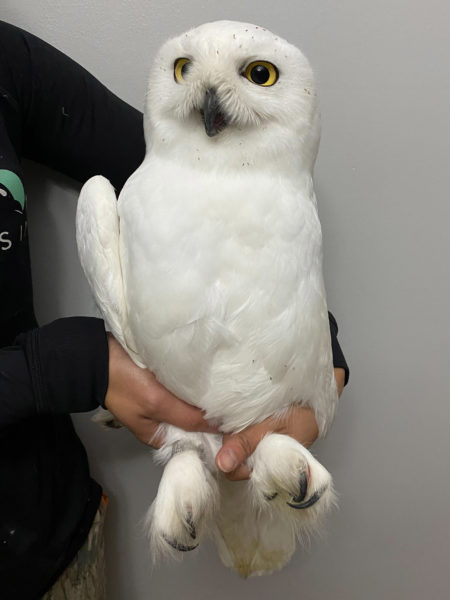 Freed from his faulty harness, Redwood is ready to go back to the farmland east of Ottawa. (All those dark flecks on his head and face are feather lice, which are common to all birds but especially obvious on a snowy owl.) (©Steph Boardman)

Fortunately, the connections we made with Marcel and Predator Bird came in very handy this past week, when we realized we had an issue with Redwood. He’s the adult male that Tom McDonald tagged last winter in New York, and who was wintering just east of Ottawa this year. Last weekend, a birder posted a photo on eBird of Redwood, which showed that he had somehow (presumably) bitten through one of the shoulder straps on his transmitter — quite a feat, since we and other raptor biologists have used woven Teflon for harnesses for decades because of its terrific strength and wear resistance.

While the transmitter was still reasonably secure, we didn’t want to risk further problems. Marcel, Steph Boardman at Predator Bird and her boss, Stephen Bucciarelli, immediately offered to help trap him — and if we could get an emergency permit from the Ontario Ministry of Natural Resources and Forestry, Rebecca McCabe could race over from Québec and fit Redwood with a fresh harness. The ministry was extremely helpful, and we had the permit within 24 hours.

Tuesday evening Redwood checked in, and Wednesday Steph headed out to search for him, armed with his latest tracking data. Easier said than done; by early afternoon not only had she not found him, but worse, the province had issued another COVID-19 lockdown order, set to take affect at midnight. Because Redwood’s unit wouldn’t check in again until Thursday at 7 p.m., we had no way of knowing just where he was.

By luck, just at dusk Steph and one of her colleagues found Redwood. Although there was big female snowy in the area — and the larger females often chase away smaller males like Redwood — they were able to catch her first, then Redwood.

Because of both the impending Ontario lockdown, and a COVID-imposed curfew in Québec, Rebecca was unable to meet them to swap harnesses. So we had Steph and the crew simply remove Redwood’s transmitter, and after fully processing him (weighing and measuring him, assessing his overall condition — excellent — and making careful note of how his wing molt has changed since he was first captured) he was released back where he’d been caught.

Obviously, we would have preferred to continue tracking this stunningly white adult male, but our first responsibility was to his welfare. Better to have him untracked than wearing a bad harness. We’re deeply grateful to the Predator Bird Services folks for their help, and we look forward to working with them and with Marcel in the future. We also plan to switch our harnesses to a new, even stronger synthetic material, Spectra, with which we’ve been experimenting. 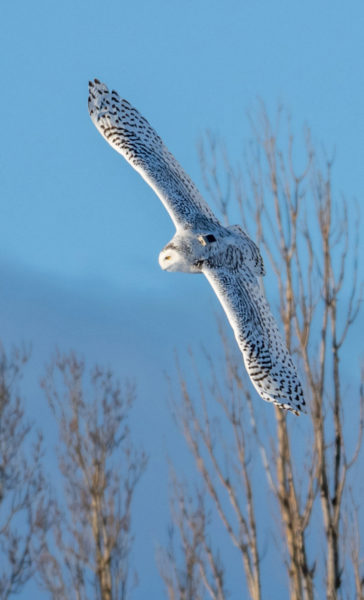 The other big surprise last week was the briefest of signals from Wells, one of our oldest veteran owls — an adult female first tagged four years ago in Maine, and who has wintered every year since in Québec City. We last heard from her in early April 2020 as she was heading north through southern Québec, but on Jan. 11 we got a single blip from her transmitter — no current location, and only a few stored data points from last April as she was heading north. Her battery was so low that even sending those few dozen points shut it down again.

Andy McGann at CTT was able to look under the hood, so to speak, at the raw metadata coming into their server, and he confirmed that the signal was picked up at a Canadian cell tower — and fairly close to a tower, based on signal strength. (Cell privacy restrictions prevented him from knowing just which tower it was, or where.) We’re betting she’s back in Québec City again, but her battery is now getting pretty old, and it may not be holding a charge as well as we’d like. The past two years it took until mid-winter for the charge to build up and for Wells to start communicating regularly. Our fingers are crossed that’s the case again this year, but we’ll have to see.

As for the rest of the 2020-21 crew, they are fine and have been hanging tight since our last report. Stella remains on the Cheyenne River Reservation near Eagle Butte, South Dakota. Columbia is southeast of Spirit Lake and Milford in northwestern Iowa, and Simcoe is patrolling the farmland of Amherst Island and the nearshore waters of Lake Ontario, including occasional trips to Wolfe Island, Pigeon Rock and the Brother Islands. In Québec, both Yul and Alderbrooke have settled down nicely in the farmland east of Montréal, south of the St. Lawrence River. 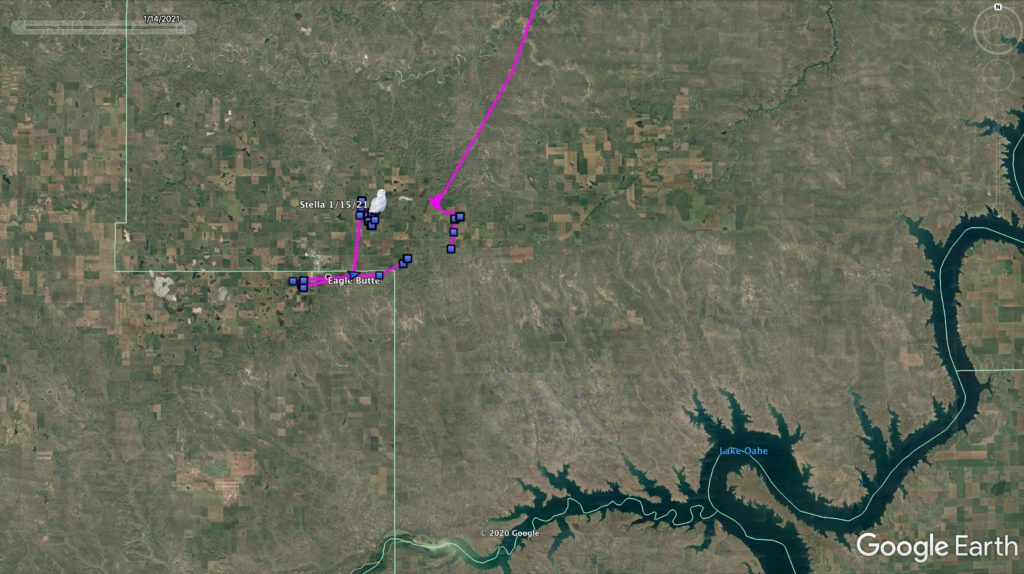 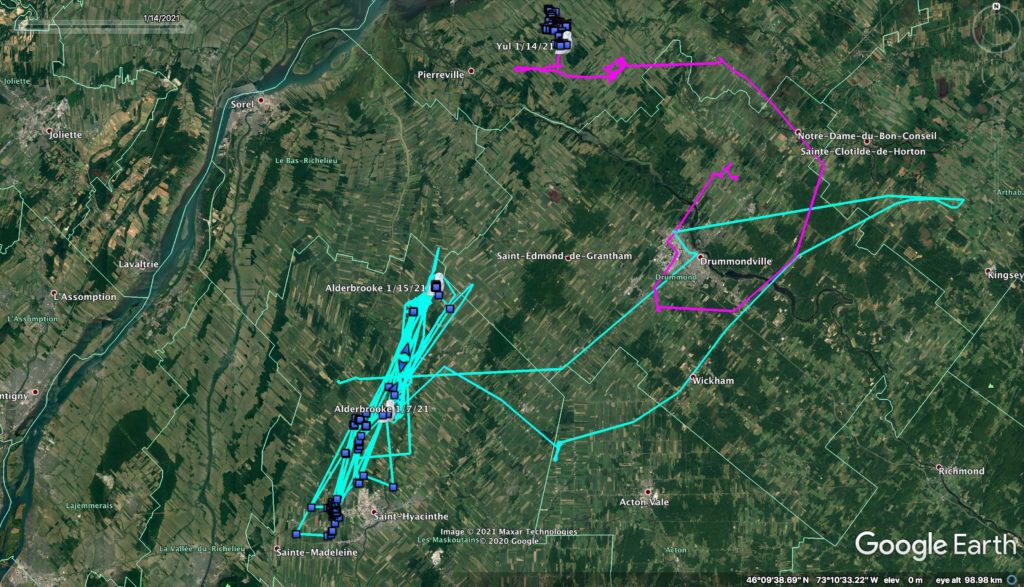 Alderbrooke’s and Yul’s winter territories in southern Québec; Alderbrooke is commuting about 28 km (17 miles) back and forth between two areas. (©Project SNOWstorm and Google Earth)

A Long, Long Way from a Mickey D
A Yul-etide Visit

28 Comments on “A Whole Lotta News”