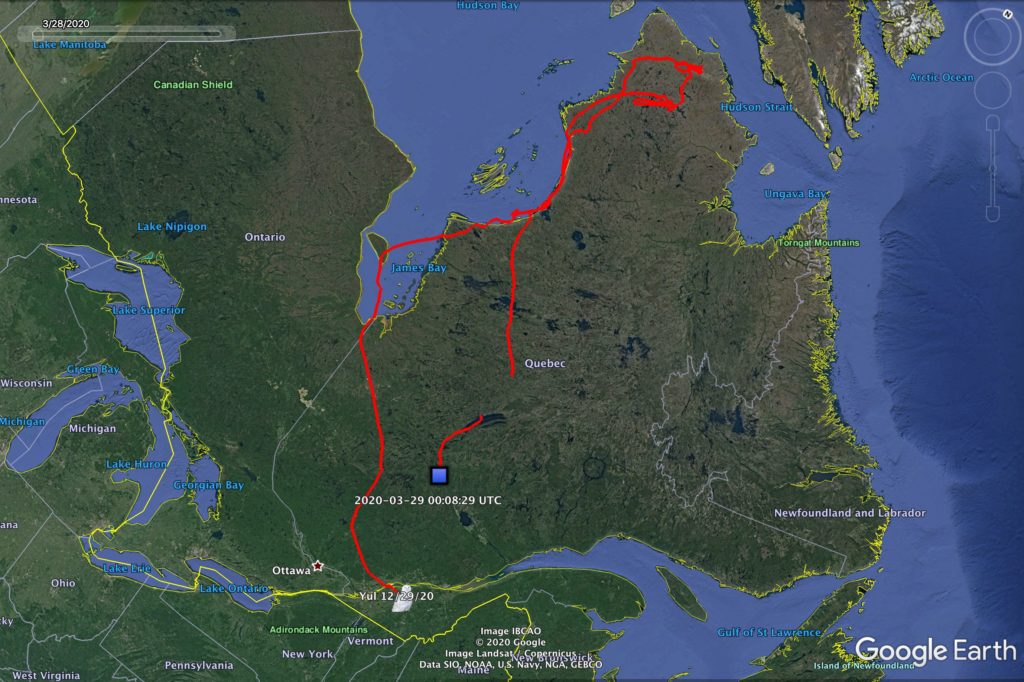 Like a number of our owls this year, Yul migrate north and nested last summer in the Ungava Peninsula of northern Québec. (©Project SNOWstorm and Google Earth)

We’re delighted to announce that another of our 2019-20 class of owls is back on the grid — Yul, an adult female tagged in November 2019 at Montréal-Trudeau International Airport (aviation call sign: YUL). She was trapped at the airport by Falcon Environmental, fitted with a transmitter by SNOWstorm team member and McGill University Ph.D. student Rebecca McCabe, and relocated away from the airport — twice, because she initially came right back.

We last heard from Yul in late March, after she’d left her eventual wintering site east of Montréal, with her final data transmission March 29 in southcentral Québec. We now know that she migrated north through the boreal forest to Hudson Bay, then up to the northern Ungava Peninsula where a number of our tagged owls nested this past summer. 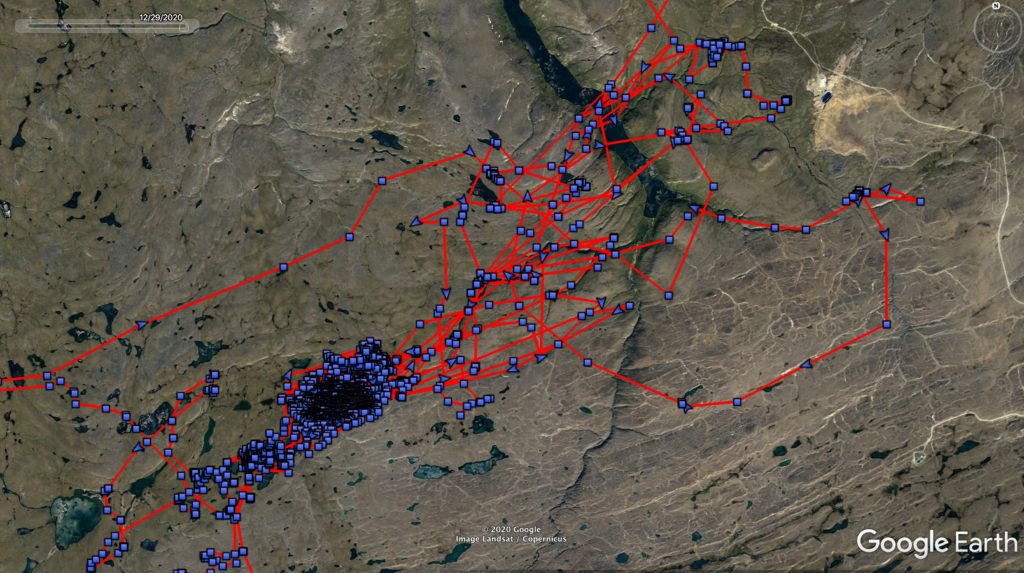 Yul’s summer 2020 territory, showing her nest site in the lower left. The wider movements at right, before she settled down to next, brought her near the old Asbestos Hill mine, upper right. (©Project SNOWstorm and Google Earth)

And Yul apparently did, too — her data strongly suggests she had a nest some 90 km (56 miles) southwest of Cap de Nouvelle-France, near the northern tip of the peninsula, and south of Deception Bay. Shortly after arriving in the area in mid-May, Yul wandered up to the edge the old Asbestos Hill mine — one of the first mines in the Canadian Arctic and an operation that lasted from 1972-84, with significant negative impacts on the local Inuit population. Her eventual nest site was about 27 km (17 miles) to the west of the old mine site.

Yul hung around her nesting territory through early October, and remained in the northern Ungava until the first few days of December — much later than many of our returnee owls have done in the past. (It’s worth remembering, though, that not all snowy owls migrate south — some remain in the Arctic or subarctic for the winter, and some even move north onto the sea ice for the season.)

Once she began moving south, she angled toward Hudson Bay, staying out on the ice there and on James Bay, touching on Akimiski Island Christmas Eve. From James Bay she moved rapidly across the southern boreal forest, reconnecting by cell signal just after arriving back near her last winter’s territory east of Montréal on Dec. 29.

All of Yul’s backlogged data, nearly 11,000 GPS points, is available for you to explore on her interactive map.

Here’s what’s happening with the rest of the crew:

Starting in the same neighborhood as Yul — they’re only 42 km (28 miles) apart — is Alderbrooke, who has been a better-behaved owl since her second relocation from the Montréal airport. She checked in Dec. 29 and appears to be staying within a few kilometers of the small village of Saint-Hugues, Québec, on the south shore of the St. Lawrence. Dorval hasn’t checked in since Dec. 22, when she was at the Central Experimental Farm in Ottawa. 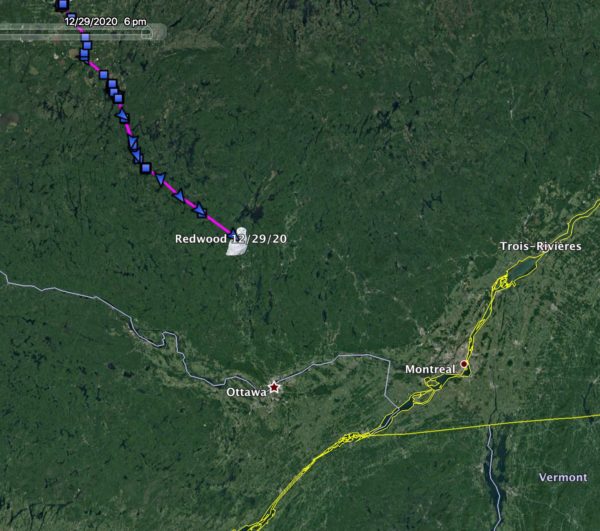 Since his last transmission Dec. 20, Redwood moved about 300 km (187 miles) south from Abitibi through Val-d’Or and La Vérendrye Reserve — and area of deep forest, hardly good snowy owl habitat — before stopping Dec. 29 between Lytton and Maniwaki, QC, where there is a bit more open land. We’d expect him to keep pushing on in the days ahead at least until he reaches the Ottawa River, another 125 km (77 miles) farther south.

Simcoe remains on Amherst Island, to which she returned last week. 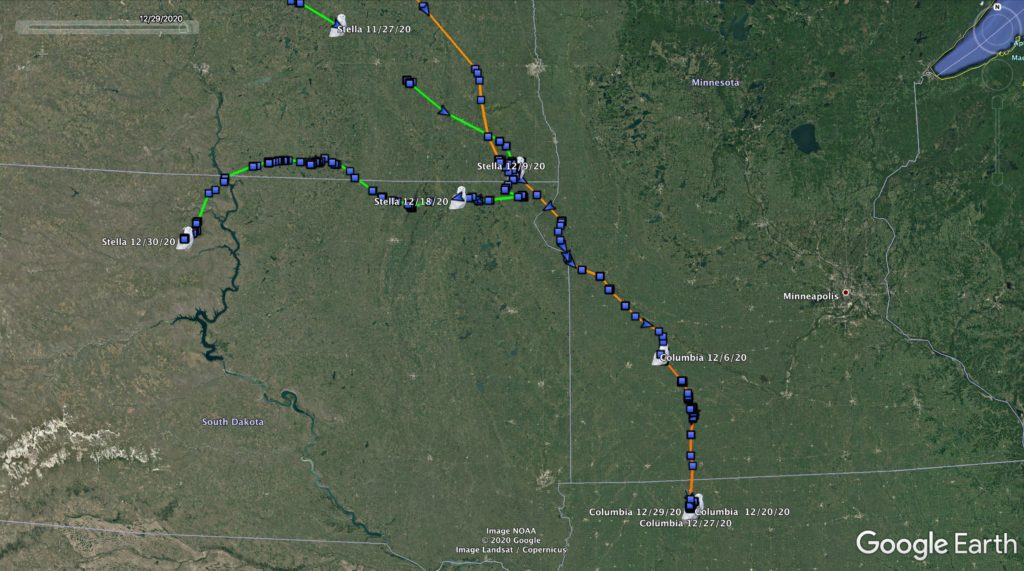 Columbia (orange) has settled down for a spell near Spirit Lake, Iowa, while Stella (green) has been weaving back and forth across the ND/SD border. (©Project SNOWstorm and Google Earth)

Jumping west, Columbia seems to have found a spot she likes south of Spirit Lake and Milford in northwestern Iowa. On the other hand, Stella has been restlessly moving west, back and forth across the North Dakota/South Dakota border. Dec. 27-30 found her on the Standing Rock and Cheyenne River reservations, home (respectively) to the Standing Rock Sioux Tribe and Cheyenne River Sioux Tribe. Standing Rock has been the site of years of protests over the Dakota Access pipeline, which tribal members believe represents an existential threat should the oil pipeline rupture and foul the Missouri River, their source of drinking water.

To all those who have contributed to this winter’s funding campaign — thank you! If you’re in a position to help, we greatly appreciate it, and your contribution is tax-deductible. But if not, no worries. We’re glad to have you along for the ride.