Most people want to get in and out of airports as quickly as possible, but not Philly. Apparently this young male owl, which we tagged on Jan. 9, has found his own food court at Philadelphia International Airport — though it’s not the safest place to hunt.

One theory about why airports are so attractive to snowy owls is that, in addition to be wide open, flat and treeless (like the Arctic from which the owls came) they are often close to excellent sources of food, like coast lines, rivers and marshes.

That’s the case with Logan Airport in Boston, where our colleague Norman Smith has been studying snowies for more than 30 years. Right on the Charles River and Boston Harbor, Logan provides its owls with a feast of ducks, gulls, muskrats and other seafood.

For that reason, and given how tagged owls like Assateague have spent so much time hunting over open water this winter, we expected Philly would spend his nighttime hours hunting the Delaware River that lies just yards from the runways, or John Heinz National Wildlife Refuge, a mile to the north of the airport across I-95.

Instead, since he returned to PHL a week ago, this young male snowy has spent his time essentially within the perimeter of the airport, as you can see from this overview, which includes all his movements since returning Jan. 11. 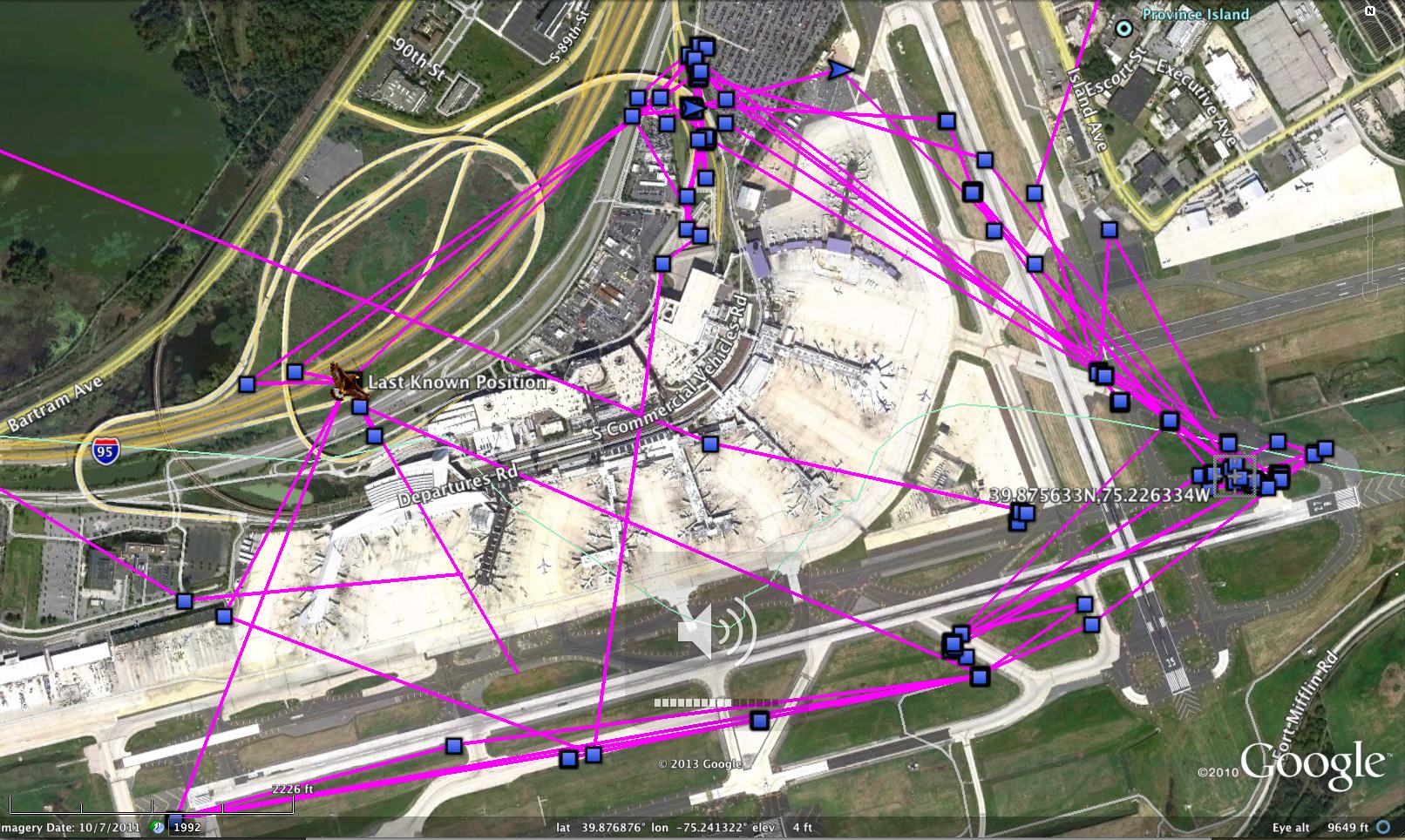 For the past week, Philly has rarely strayed from the grounds of Philadelphia International Airport – a dangerous place for a bird to make a living. (©Project SNOWstorm)

During the day he hangs out along the taxiways at the east end of the airport, very close to where we initially trapped him. After dark he often flies to exit roads leaving the terminal and parking garage, close to the economy parking lot, and sits on the high light poles or street signs watching the grassy areas below. That’s a busy place, especially just at dark, when airport traffic is often the heaviest.

Another favorite location — and one that worries us even more — is a short utility pole between the northbound lanes of I-95 and the Exit 12 ramp. The latest three-day batch of locations, which his transmitter sent Saturday evening, show that he’s been using that perch repeatedly the past few days. The short, unkempt grass must be full of rodents (probably meadow voles) — the same reason you’ll see red-tailed hawks and the occasional American kestrel hunting the same areas by day. 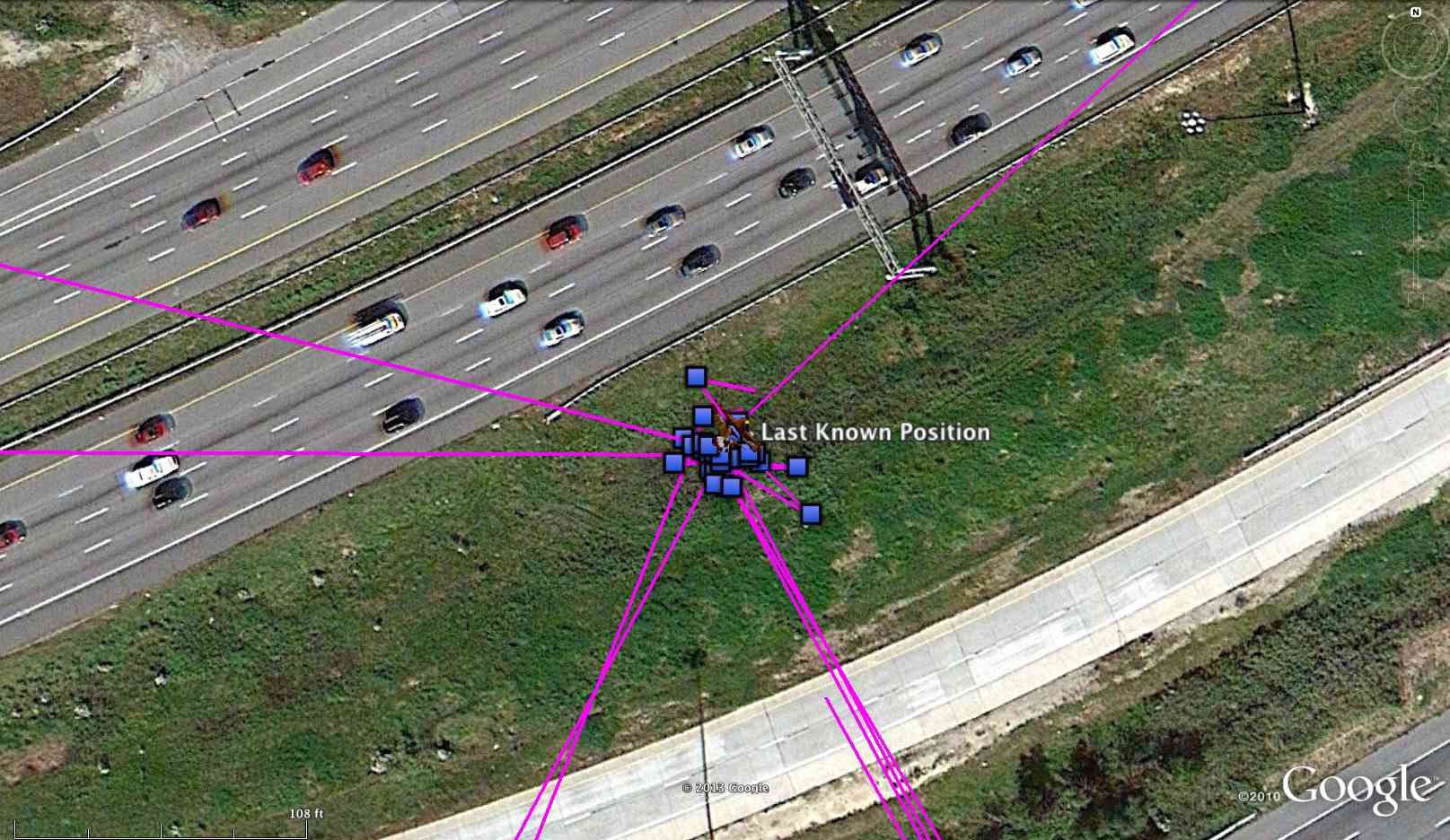 One of his favorite hunting perches is a short utility pole just off I-95 – the grassy median must be full of rodents. The street view of his perch is below. (©Project SNOWstorm)

But if you look at the Google Earth image, you’ll probably have the same thought I did — why not hunt the much larger open areas north of I-95, in the cloverleaf of the airport exit roads? That puzzled me, until I used the Street View feature — and realized that those areas are covered in dense brush, small trees and stands of phragmites — the kind of thick cover that snowy owls avoid. 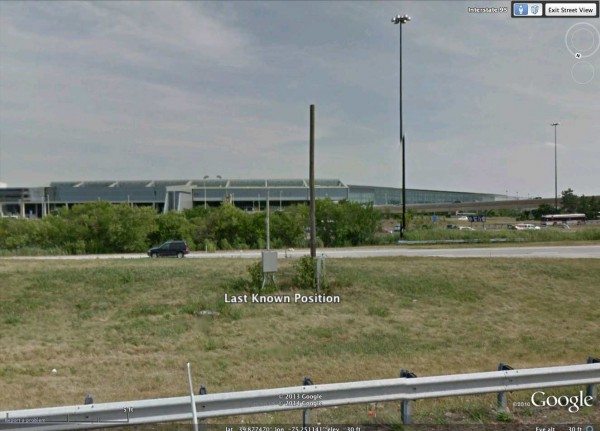 Philly’s favorite perch — a risky spot with all the traffic.

We’d still like to get Philly and the other snowy owls that periodically use PHL relocated for their own safety,

although the owls aren’t cooperating. Last week USDA Wildlife Services and Pennsylvania Game Commission personnel tried to retrap Philly, but he was having none of it — the hunting must be good, because he showed no interest in their trap.

So we’ll keep tracking him, and keep crossing our fingers that he stays out of the way of traffic both in the air and on the ground. In the meantime, he’s giving us a fascinating look at how a wilderness animal makes a living in a highly urbanized, modern environment. 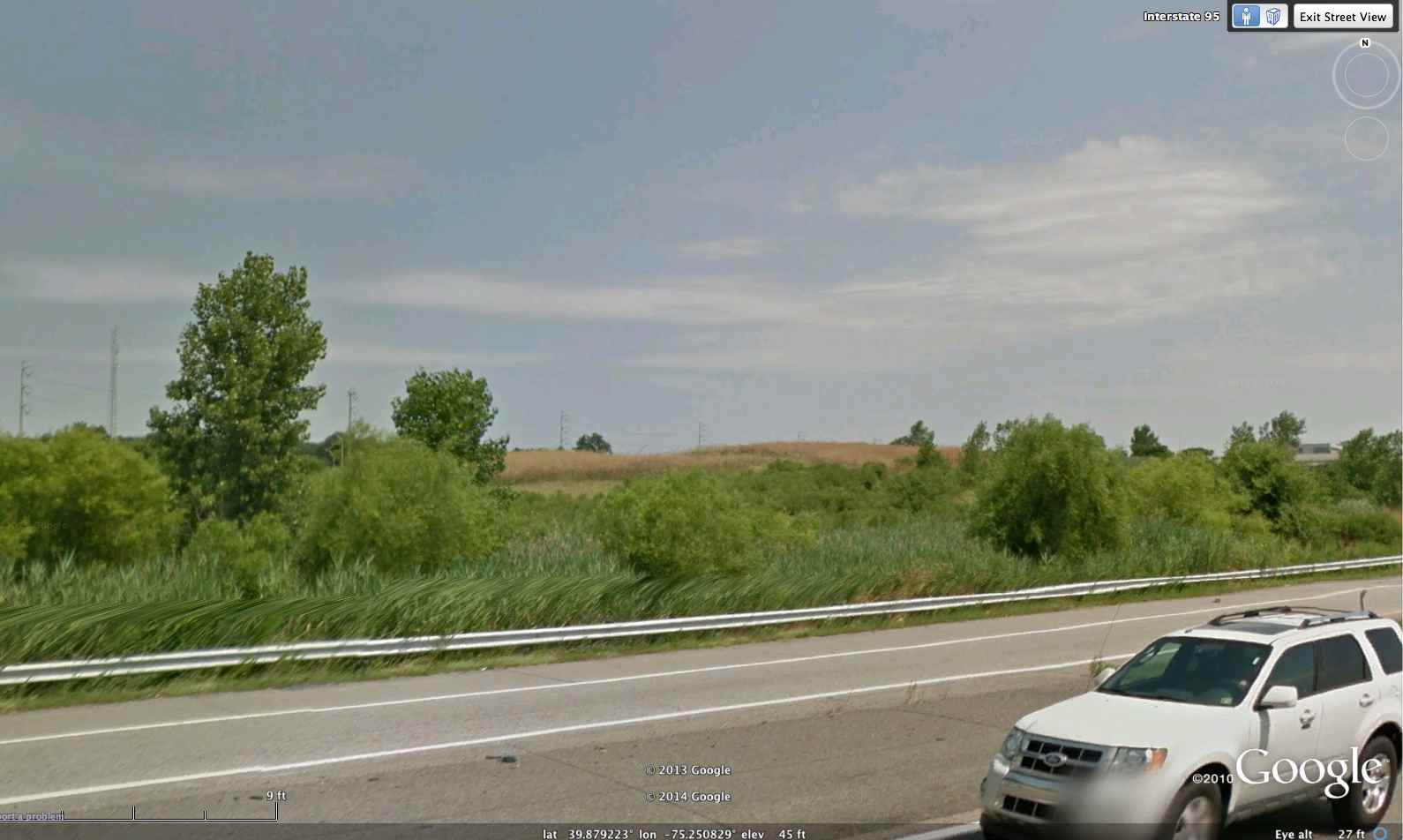 The larger, brushier area just to the north – far less attractive habitat for a snowy owl.

How to Make an Owl Researcher's Heart Stop
Release the maps!