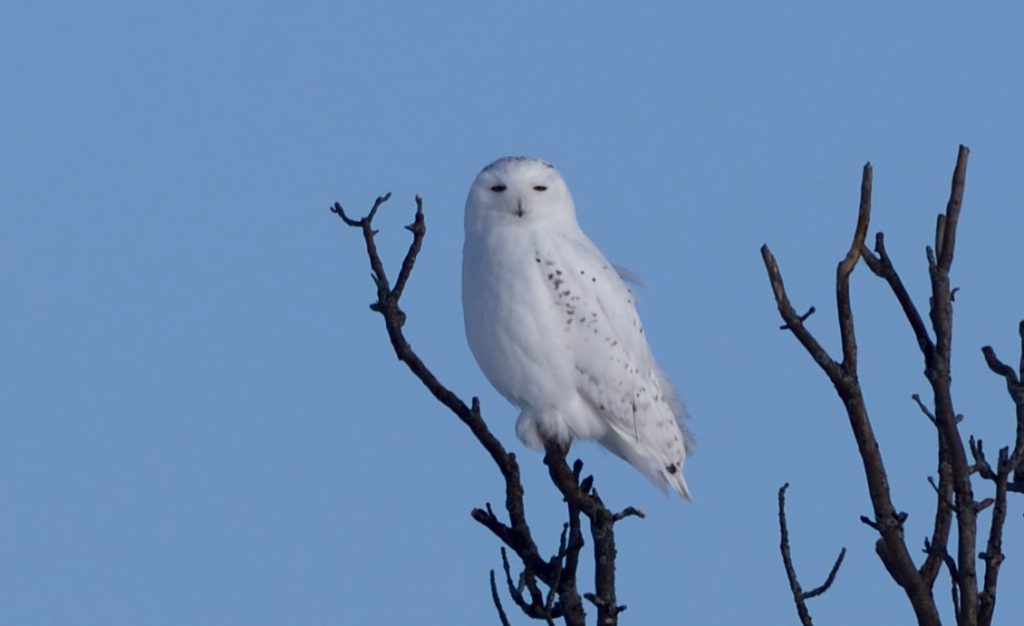 On a sparkling February day, Baltimore suns himself while posing for a few photos. (©Daniel and Patricia Lafortune)

An all’s-well report on our cadre of snowies — as of the end of last week, everyone was just where he or she was expected to be.

How long it remains that way, though, will be interesting to see. The days are getting longer, which may start nudging up hormone levels in our adult birds, making them restless with the first stirrings of spring. After heavy snows last week, parts of the East will be experiencing remarkable mild weather this week, although the really unseasonable warmth won’t push up into New England, New York and southern Canada. But if we have an unusually early spring, we may see the owls head north sooner than normal. 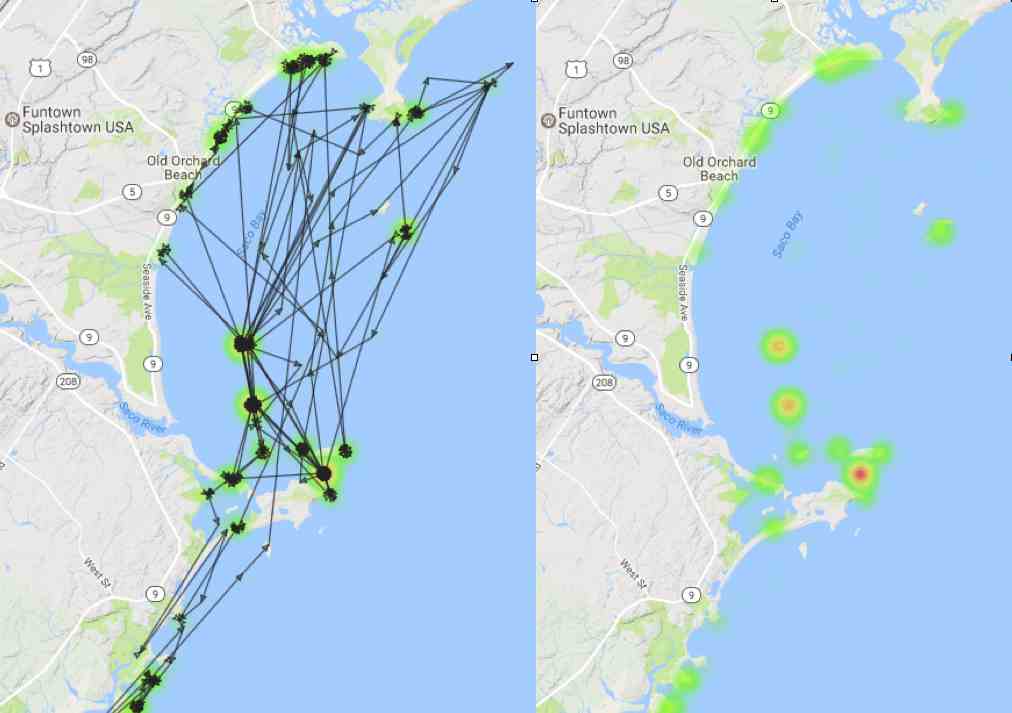 Two views of Wells’ movements at Saco Bay. On the right, her paths are removed to show a “heat map” — the brighter orange or red, the more time she spent there. She really likes Gooseberry Island. (©Project SNOWstorm and Google Earth)

We’re happy to see that Wells seems to have settled down nicely in Saco Bay, where this past week she spent more time on shore in Old Orchard Beach, Pine Point and Biddeford Pool, and somewhat less on offshore islands, though she still likes Gooseberry Island. Whether the heavy snow that coastal Maine experienced a week ago had anything to do with the change, we can’t say. And over in New York, Oswego’s been regular as clockwork on the town waterfront and river mouth.

Two sets of tracks — snowshoes on the left, snowy owl on the right, which show were Baltimore did some walking. (©Daniel and Patricia Lafortune)

We had great photos last week from all three of our returnee owls. The indefatigable Lafortunes, Dan and Patricia, were out again checking on Baltimore west of Ottawa, ON, and got some nice photos of this stunningly white adult male, which we first banded in 2014. They snowshoed through the deep drifts (it hasn’t felt a lot like spring in southern Ontario the past few weeks), in order to check some of Baltimore’s regular haunts.

So in addition to getting pictures of Baltimore, they also sent some cool photos of his tracks near a stump that he often uses as a perch. Snowies will sometimes walk surprisingly long distances — I once had a young male walk the last hundred meters or so into a bow net, simply strolling up to the lure…hardly the image of a mighty hunter. 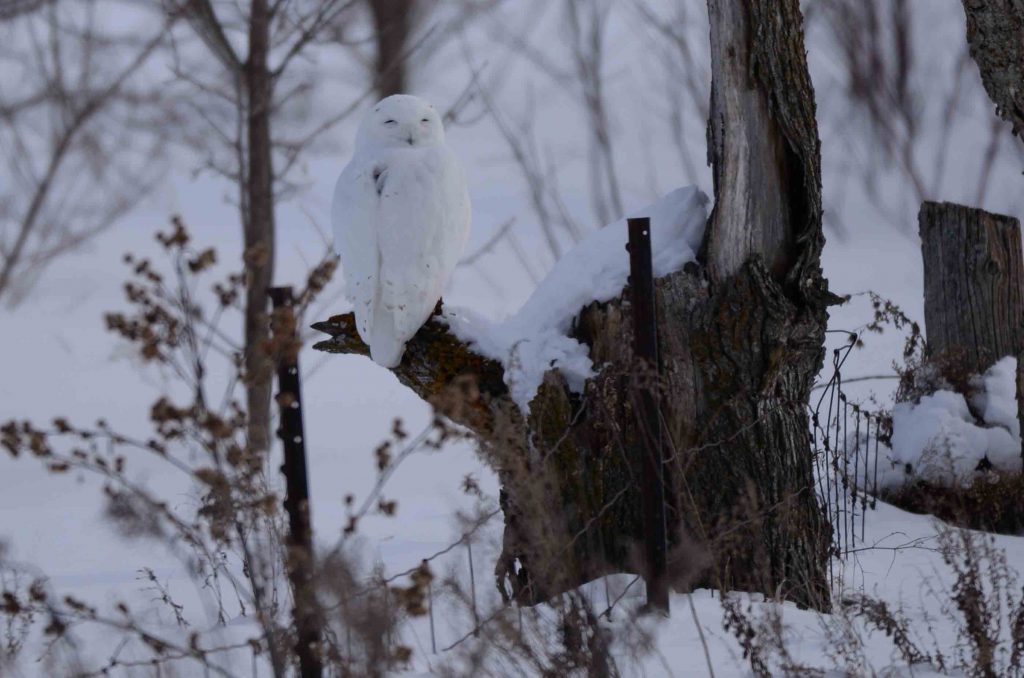 Hardscrabble picked a picturesque daytime roost — with his solar panel just barely visible among his feathers. (©Daniel and Patricia Lafortune)

And for the first time in a while, the Lafortunes were able to catch up with Hardscrabble as well, who for weeks had played hide-and-seek with them on his winter territory near Cobden, ON. The photos showed us what we suspected — that Hardscrabble has preened his feathers up over much of his transmitter, which explains why his voltage has been a bit more sluggish this winter than we expected. Fortunately, with the longer days it’s doing fine despite the feather cloak. 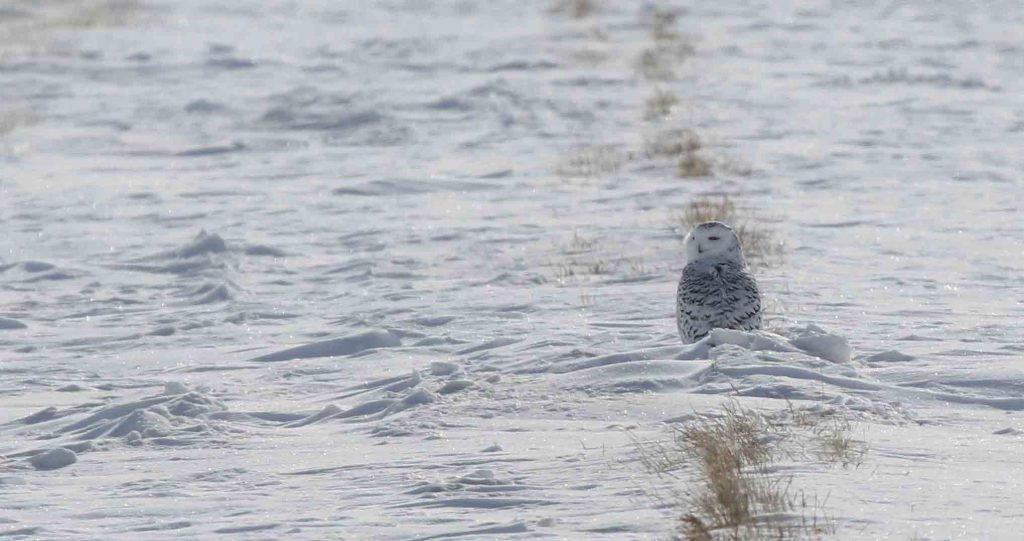 Out near Francis, Saskatchewan, Dakota did a little posing as well for sisters Val and Kim Mann. “Dakota was sunning herself on the same snow-covered grid road as in January, but about half the distance from us. She stayed for about an hour before flying southwest, further into the field. The transmitter outline was visible as she flew,” Val reported. “It was a beautiful day here in Saskatchewan, sunny and about -3 Celsius. We saw 18 snowy owls, seven short-eared owls and one great horned owl.” Since then, the weather has gotten nicer in southern SK but the unpaved grid roads have become a muddy mess.

Val and Kim mentioned that the previous weekend had been the annual “Snowy Owl Prowl” — an informal count of the snowies around select areas in southern Saskatchewan. More than 100 snowy owls were seen, which the organizers said was the highest number of the past four years.

Dakota and Hardscrabble: The Rest of the Story
A Perch with an Historical View (and a Big Thank You!)