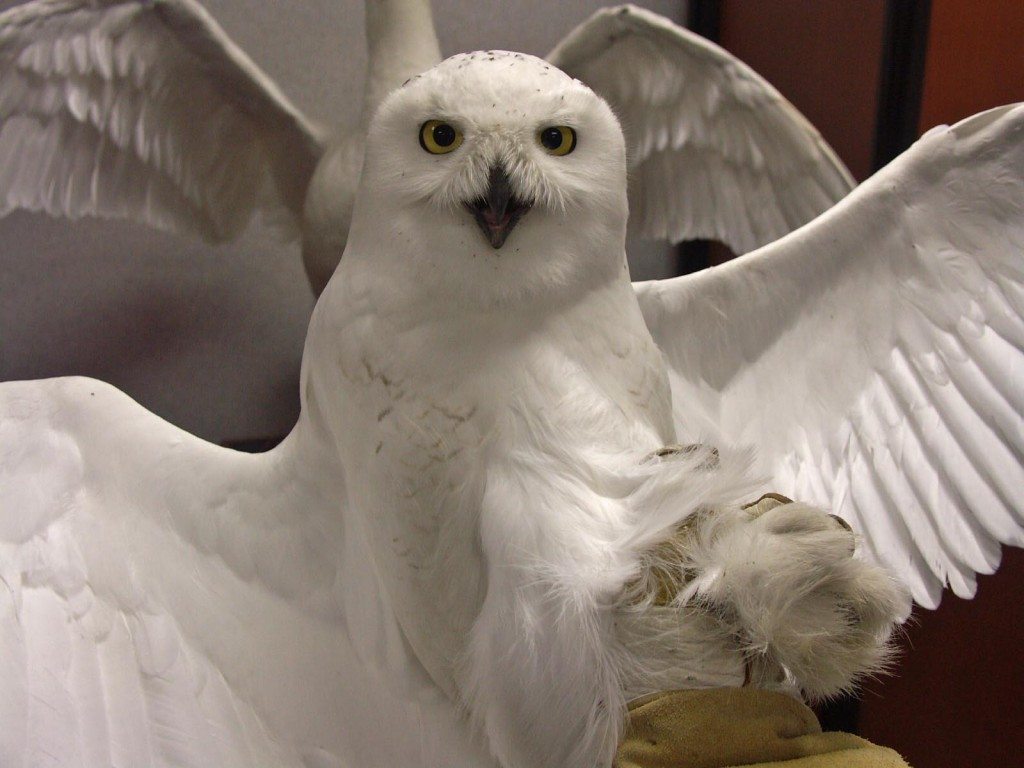 Alma, Michigan’s first Project SNOWstorm owl, about to receive his transmitter. (That’s a stuffed swan in the background, by the way – and the speckles on his face are feather lice, typical of snowy owls.) (©Brian Washburn)

Michigan has its first SNOWstorm snowy owl, the result of a wide, collaborative network between researchers, a local college, several organizations, agencies and institutions in that state.

And besides adding to our growing understanding of the winter ecology and movements in this species, this freshly tagged bird may help us understand how to better protect snowy owls at airports.

He was an adult male, probably in his third year, and his name honors Alma College in Alma, MI, which sponsored his transmitter through the good offices of professor (and bird bander) Mike Bishop and his students.

This is the first year that Project SNOWstorm has been working in Michigan, where bander Allen T. Chartier has pulled together a network of folks in the Upper and Lower peninsulas to both do field work and fund transmitters.

Mike quickly stepped forward with an offer to underwrite one of the $3,000 transmitters, while Jonathan Lutz at Michigan Audubon did the same on behalf of his organization, and Kalamazoo Nature Center and the Laughing Whitefish Audubon chapter in the U.P. have made significant contributions. Longtime owl banders Nova Mackentley and Chris Neri, from Whitefish Point, have been banding snowies on the U.P. since early winter, while everyone was getting the necessary state and federal permits in place for the tagging.

We’ve also been working with Dr. Brian Washburn from USDA APHIS Wildlife Services, the federal agency that handles bird issues at many airports — where snowy owls can be a real concern. That’s where Alma comes in. 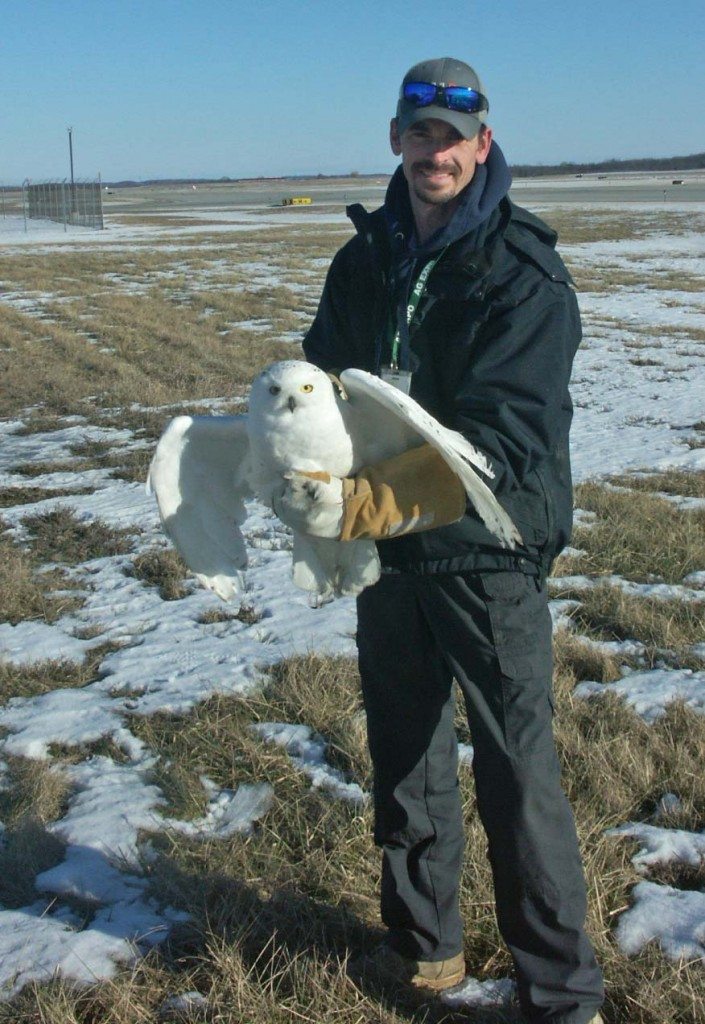 Snowies love airports because — being flat, wide-open and treeless — they are often the only habitat in a given area that looks anything like the flat, treeless tundra from which the owls came. (That’s the same reason snowies also favor coastlines and open farmland.)

Unfortunately, airports are vastly more dangerous then beaches or farms. Many snowies are killed by plane strikes, and the owls in turn pose a significant hazard to the planes, their crew and passengers.

Relocating snowies has a long history. It’s something that Project SNOWstorm co-founder Norman Smith, with Massachusetts Audubon, has been doing tirelessly for more than 33 years at Boston’s Logan Airport. Last winter alone, Norman moved more than 150 owls from Logan, including four that were tagged as part of our project.

Unfortunately, the owls don’t always stay moved. One that I tagged last winter was transported from Philadelphia International Airport to Amish country 50 miles (81 km) to the west, only to return and ultimately be killed in a plane strike. He was just one of half a dozen or more snowy owls killed last winter at that airport.

So Brian and his colleagues are interested in learning more about the behavior of relocated owls, including optimum distances to move them, and Alma was a great test subject. Aaron Bowden with Michigan Wildlife Services trapped Alma at the Grand Rapids airport, using a bownet with a caged pigeon — one of the most effective ways to catch an owl.

Brian then fitted the bird with one of GPS-GSM transmitters we get from CTT, and released him in the Waterloo State Recreation Area, which at 21,000 acres is the third largest state park in Michigan.

Alma’s transmitter checked in last night, and he’s moved a few miles to the southeast, closer to the town of Chelsea; at dusk last evening he was sitting on the roof of a dairy barn along a small back road. (As usual, we’re going to delay updating a movement map for Alma until we go through another check-in cycle, so he’s not too easily located and possibly disturbed.)

Next week SNOWstorm co-founder Dave Brinker will be heading to Michigan to work with Nova and Chris to get one or more owls tagged in the LP and UP, with additional tagged owls to come. We’ll be keeping an eye on Alma, too — and keeping you posted about his movements.

We also plan to continue working with Wildlife Services on other relocated airport owls, including more in Michigan and others (we expect) in Ohio and Maine.

In other owl news, things have been quiet with our previously tagged snowies. Erie had been heading south toward Lake Erie when last heard from — and with the lake about three-quarters frozen, he may well be far from the cell network, doing what he does best, living on the ice.

Chaumont, banded last weekend along Lake Ontario, has likewise been quiet — it’s times like these when an owl researcher learns to practice patience.

Millcreek’s last check-in was Jan. 19, when he was continuing to use a residential and office park area southeast of the Toronto airport, near Centennial Park. That evening his transmitter downloaded a new duty cycle, switching it from a three-day period to a check-in every seven days, a power-saving measure.

That meant he should have checked in on Monday, but didn’t. He’s missed multiple check-in cycles previously this winter, so we’re not terribly concerned — but I’ll confess I’ll breathe easier when he phones home, because he’s been routinely hunting the margins of a couple of busy freeways. We’ll be hoping to hear from him Monday evening as a Groundhog Day present.

Delaware is an interesting story that deserves it’s own post — and my colleague Steve Huy has one that we’ll post shortly.