One of the frustrating aspects of the kind of telemetry study we’re doing with Project SNOWstorm is losing track of an animal.

Sometimes we find out what happened, like the two tagged snowy owls last winter that were swamped by a nor’easter and drowned on the Massachusetts coast. Other times we don’t.

Two birds that have been longstanding puzzles this winter were Alma and Monocacy. Alma, an adult male, was the first snowy owl we tagged in Michigan. He was trapped by Aaron Bowden of Michigan Wildlife Services in late January at the airport in Grand Rapids.

Dr. Brian Washburn, the research wildlife biologist with USDA’s APHIS department who has done a great deal of satellite telemetry work, fitted Alma with his transmitter, and the owl was released far from the airport, in a huge state wildlife area.

For the next two weeks, Alma remained in the general area of his release, near Chelsea, Michigan. But the last time his transmitter checked in was Feb. 13.

At first, we assumed Alma was one of those owls that, either by preening its feathers over the solar panel, or consistently roosting in the shadow of larger objects, makes it tough to regain solar charge. But when the longer days of spring came, with no reappearance of his signal, we wondered if something more serious had occurred — a transmitter failure, or perhaps an accident (like a vehicle or plane collision) that had damaged or destroyed the unit.

Likewise, we were wondering about Monocacy, an adult female we’d originally tagged last winter in Maryland, who was recaptured in February in New York City, retagged and released on Long Island. She made a beeline west, and was last heard from on the waterfront Bayonne, NJ, just a few miles from the Newark airport. 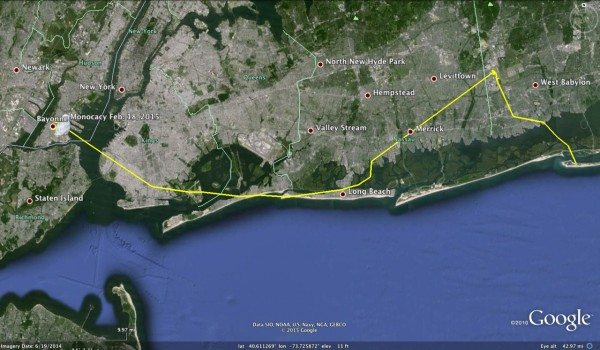 The location data we have from Monocacy ending on February 18th.

Last week, we got news on both fronts. We got word that Alma had been resighted back at the Grand Rapids Airport — but that his transmitter was partially free and hanging below his belly, in a position where it couldn’t get direct sunlight. And thanks to a friendly dog-walker in Bayonne, we recovered Monocacy’s transmitter — but still have no idea what happened to the owl itself.

Alma’s situation was an obvious concern. Judging from photos from airport personnel, the owl had managed to remove the front portion of his backpack harness, which is made from woven tubular Teflon, a material that is both extremely tough and which won’t rub or chafe. With that portion gone, the transmitter had slipped from the middle of his back to the middle of his belly.

Ornithologists have been making harnesses from Teflon for years, on everything from songbirds to eagles, and it normally works very well. The harnesses of six owls we’ve tagged, which were recovered or recaptured anywhere from a month to a year after tagging, showed no signs of abrasion or wear. On the other hand, if a bird is determined enough, it can chew through the harness — Brian and his colleagues have had a particular problem with Canada and snow geese doing so, for instance.

Regardless of how it happened, our priority immediately became catching Alma, if humanly possible, and removing the transmitter. Our concern was less about recovering the unit (though that would be nice) and primarily removing a now-useless piece of equipment that was almost certainly in the bird’s way.

We overnighted extra trapping equipment to Aaron, so he would have a couple of options besides the standard bownet, bal-chatri traps and Swedish goshawk traps he normally uses. Aaron headed up to Grand Rapids as soon as the deliveries arrived.

When he got there, though, Alma was sitting directly on the center line of the runway — the most dangerous place imaginable — and had to be flushed before any trapping attempt could be made.

Unfortunately, the owl then vanished. Over the next 11 hours Aaron managed to catch the other three snowy owls at the airport — a remarkable achievement — but he was never able to catch Alma, or even get a clear visual on him. (One of the owls he did catch was in poor shape, with wing and eye injuries, having been seen to fly full-speed into a taxiway light some days earlier, smashing it. That bird was sent to a rehabber for treatment.)

The next day, with dramatically warmer temps, no snowy owls were seen at the airport, and it appears Alma (and the others) have left. Aaron returned to the airport a couple days ago, just in case, and he remains in close touch with the airport folks.

Obviously, if Alma is respotted somewhere, we’ll do everything possible to recapture him. But if not, we can hope that he is able to remove the rest of the harness as easily as he did the neck loops, and drop the transmitter on his own.

Monocacy is more of a puzzle. I got a call on April 9 from John Wojturski of Bayonne, NJ, who had been walking his dog at the old Military Ocean Terminal on the lower Hudson in Bayonne, a World War II-era facility that closed in 1999, and now has large areas of open, weedy land that has been popular with wintering snowies. John said he realized he’d found a transmitter of some sort, and noticed the contact information on the side and called.

“The letters were so small that I had to have my granddaughter read them for me!” John joked two days later, when he very kindly had driven west to Pennsylvania to meet me halfway to deliver the unit. The transmitter is in near-perfect shape, and with a fresh solar charge it soon uploaded its stored data, which suggest Monocacy was hunting the area around the old terminal and shipyard until at least daybreak on Feb. 20.

After that, the signal location was stationary in the general area where John found the transmitter a month and a half later, lying close to a half-eaten cottontail rabbit.

So what happened? There are a couple of possibilities.

One is that Monocacy died or was killed, although John — who walks his dog throughout that area — has seen no sign of white feathers to suggest a big white bird was scavenged in the area. I’m also not sure that a scavenger would be able to so neatly remove all of the harness material, which is sewn and knotted in place, and the knots soaked with Superglu. None of the harness material was found with the transmitter.

Another possibility (and the one that would be our hope, obviously) is that she somehow shed the harness, although Monocacy had not damaged the Teflon ribbon on her previous harness after almost a year of wear. But as we saw with Alma, sometimes harnesses do fail — though how she would have removed all of the harness from the transmitter housing is also a mystery.

(The final possibility, obviously, is that Monocacy’s disappearance was the result of foul play, and that someone cut away the transmitter, explaining the absence of harness material. That’s a long shot, we think, but it’s something we can’t entirely discount.)

So we don’t know what happened to Monocacy. We’re forced to hope for the best, and I’d like to think she’s on her way back to the Arctic, hale and hearty, along with the other owls of this year’s class.

We take the failure of one (or maybe two) of our harness systems about as seriously as it’s possible to do. We know from work on the breeding grounds by our colleagues at Laval University that Teflon backpack harnesses with this size and weight transmitter pose no long-term risk to the owls, either from a mortality standpoint or in terms of reproductive success.

But we also recognize that anytime you work with wild animals, there is a risk — and we will continue to do everything we can to minimize those hazards, learn from problems if they arise, and constantly adjust our methods and protocols accordingly. The approach that works for the vast majority of birds may not necessarily work perfectly for every individual, and when we encounter a problem, however rarely, it’s an opportunity to refine our techniques, and share what we learn with our colleagues to improve avian research as a whole.

We’ll have an update on the other owls shortly — the latest downloads include some exciting movements, both on the Great Lakes and into the North Woods.

The View from Paradise
Go North, Young Owl (and the Old Ones, Too)

5 Comments on “Alma and Monocacy”