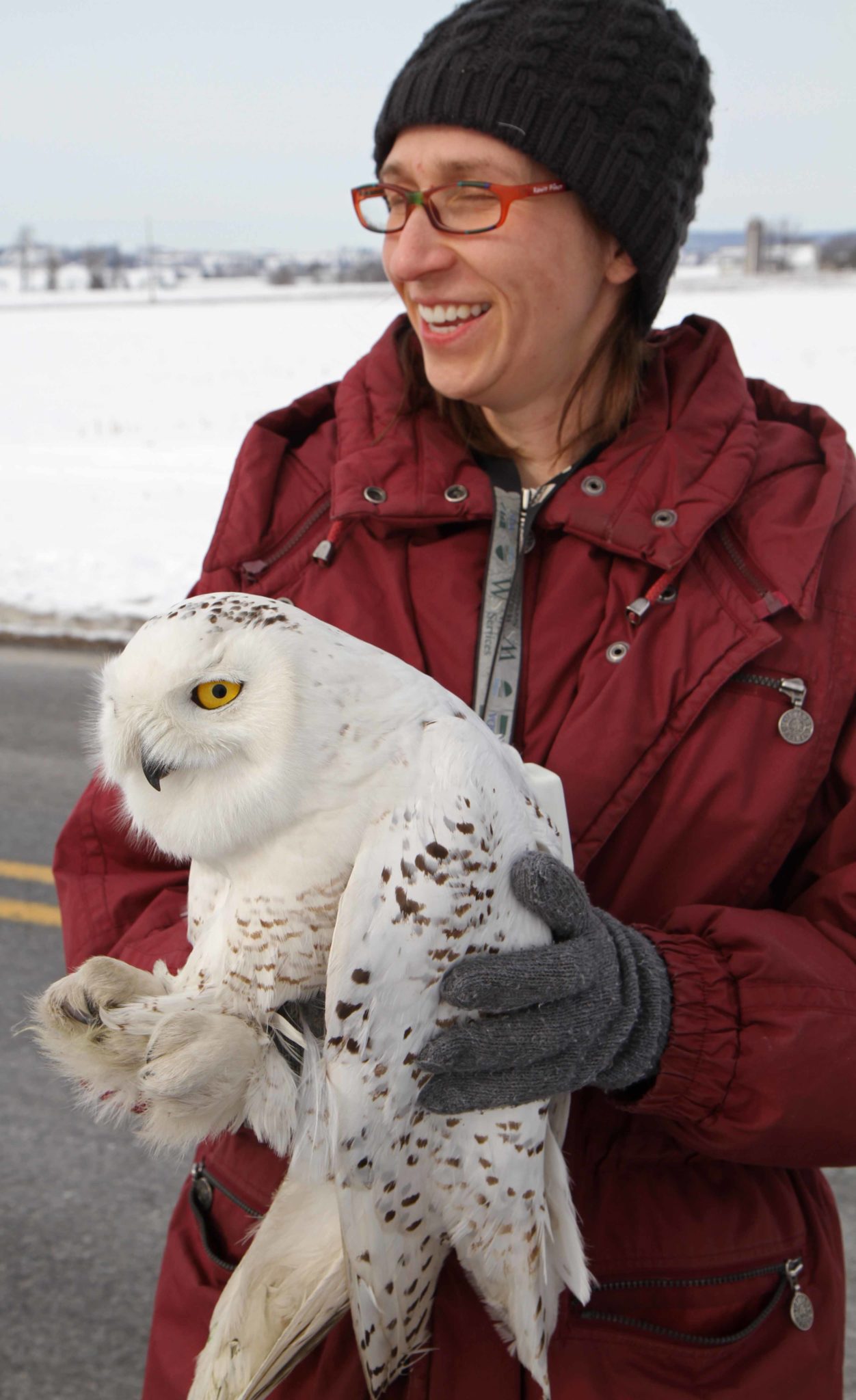 One of the best — and worst — places for snowy owls this winter has been airports. The owls love them probably because they so closely resemble the flat, treeless terrain of the Arctic, but they’re obviously dangerous places, both for the owls and for the planes (and their passengers) that might hit them.

We found that out last month, when one of our tagged owls, Philly, collided with was struck and killed by a plane and died at Philadelphia International Airport (PHL), despite having been relocated several weeks earlier far to the west. Fortunately, the jet was not damaged — a serious concern.

That’s why we’ve spent a lot of time helping USDA Wildlife Services technician Jennifer Martin trap snowy owls at PHL this winter, and she’s been busy on her own trying to move them out of harm’s way. Wednesday morning I was back at the airport, this time to band and tag an immature male Jenny had caught, and then move it to a safer place.

This was a big boy, tipping the scales at more than 1,900 grams; by contrast, most of the males we’ve caught this winter have been in the 1,550-1,650g range. He had tremendous layers of subcutaneous fat, and has obviously been eating very, very well.

We banded him, took blood and feather samples for DNA, sex confirmation and stable isotope analysis, and then carefully fitted him with a Teflon ribbon harness to hold his solar-powered transmitter in place in the middle of his back.

Then he went into Jenny’s big dog carrier for an hour-long trip away from the city. When we moved Philly Jan. 9, we released him near the Lancaster/Chester county line, only to have him return to the airport three days later. Despite repeated attempts, we couldn’t recapture him, and he was struck and killed by a jet Jan. 29. 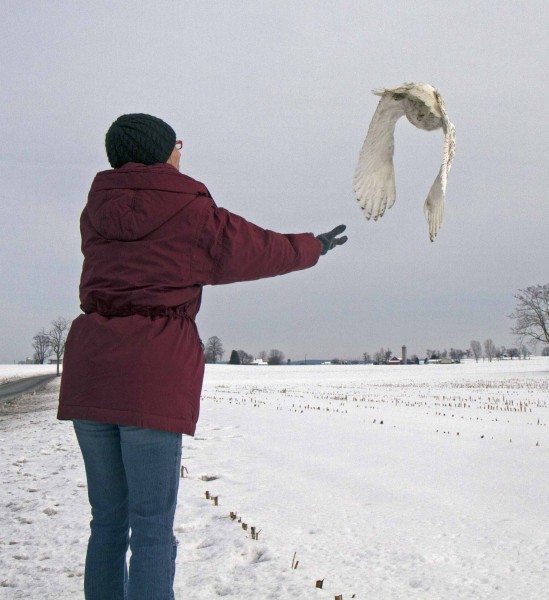 This time, we moved the new owl a little farther west, 55 miles into the heart of Lancaster County — and the epicenter for snowy owls in the region, just north of the town of New Holland. As many as four snowies have been in that area all winter, suggesting its flat, almost completely treeless terrain must have an excellent supply of food.

Amishtown Road is a little two-laner that runs through classic Lancaster County farmland, and it seemed like a good place to let him go — and “Amishtown” seemed like a good nickname, too. Jenny gave him a toss into the air, and he flew off in a huge, looping circle with the powerful, almost falconlike wingbeats typical of a snowy owl. He eventually landed about a third of a mile away, where he sat and preened.

Meanwhile, drivers kept stopping their cars and asking if we were looking for snowy owls, then offering directions to the nearest ones — less than a mile away, where two were sitting next to a Mennonite church, one of them on a stone wall just a stone’s toss from the parking lot.

Amishtown’s transmitter, like all of the units now, reports in every third day, and tonight will be the first chance we’ve had to see where he is. The New Holland area got 22 inches of snow yesterday, but I’m not worried — this owl had more fat than almost any other owl of any species that I’ve ever handled, and this kind of weather is a snowy owl’s stock in trade.

Our biggest concern, obviously, is that he not go back to the airport. SNOWstorm collaborator Norman Smith has moved more than 70 snowies from Logan Airport in Boston this winter, including two tagged owls, Duxbury and Sandy Neck, both of whom have steered clear of the airport. Most relocated owls stay relocated, and we think Philly was an exception.

But keep your fingers crossed.

Go to the interactive map for Amishtown.

12 Comments on “Amishtown joins the crew”