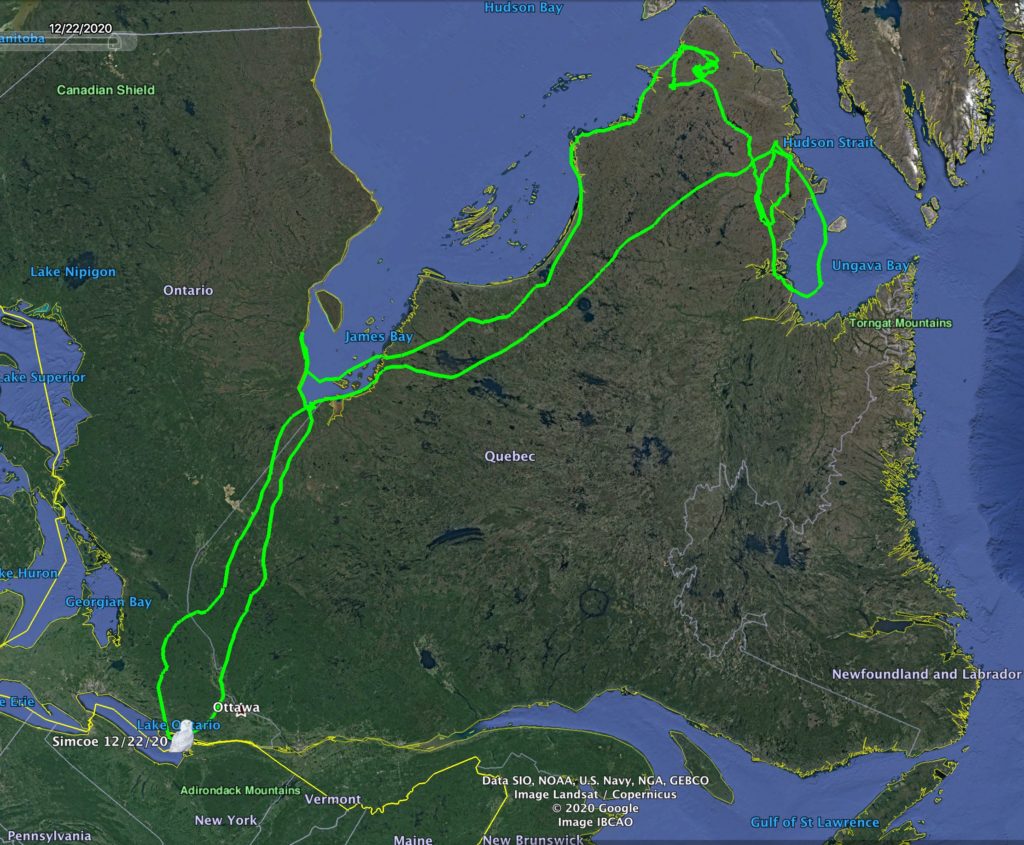 Back on Nov. 1, we had tantalizing whisper from one of our 2019-20 class of snowy owls — Simcoe, an adult female we had tagged last February on Amherst Island in eastern Lake Ontario. The first of each month, all the transmitters are programmed to send a simple “I’m here!” message if they’re in cell range, even if the signal is so weak that no data can be transmitted.

That was the case with Simcoe. There was no data, just a location — 53.186905 N, -78.452179 W. That spot is halfway down the eastern side of James Bay, and apparently just close enough to the Cree community of Wemindji, 31 km (20 miles) away at the mouth of the Maquatua River, for her transmitter to send up that signal flare. 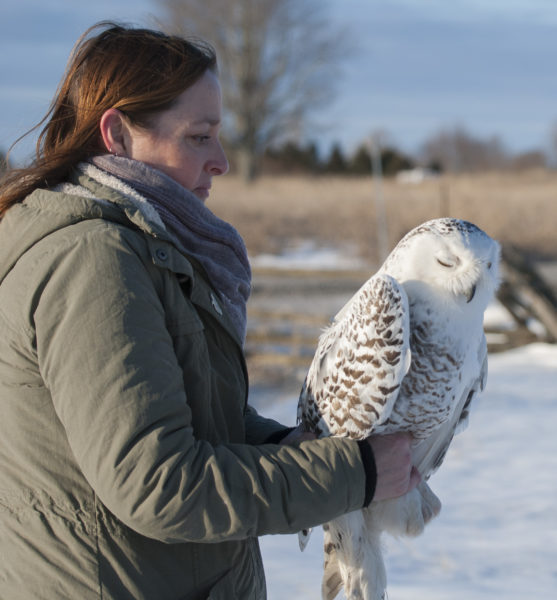 And then silence. We expected Simcoe to show up farther south, but almost two months went by — until dusk on Dec. 22, when she checked in with nearly 11,000 stored GPS points, and the news that she was right back on Amherst Island again.

Her data from the past nine months, since she left Amherst March 30 and immediately dropped off the grid, present an interesting contrast with Dorval, another adult female tagged last winter in southern Canada. Dorval, as we discussed in a previous post, made an extraordinary beeline to the northern Ungava Peninsula, settled down to nest, and then made a very quick, equally direct flight south in November. No wandering around for her.

Simcoe was significantly more meandering in her travels. She didn’t reach the northern Ungava until the end of May, having spent more than a month at the southern tip of James Bay before angling northeast across the middle of the Ungava Peninsula, making a huge loop south again over Ungava Bay, and finally reaching her end point about 60 km (36 miles) east of Hudson Bay along the Kovik River  on May 28. 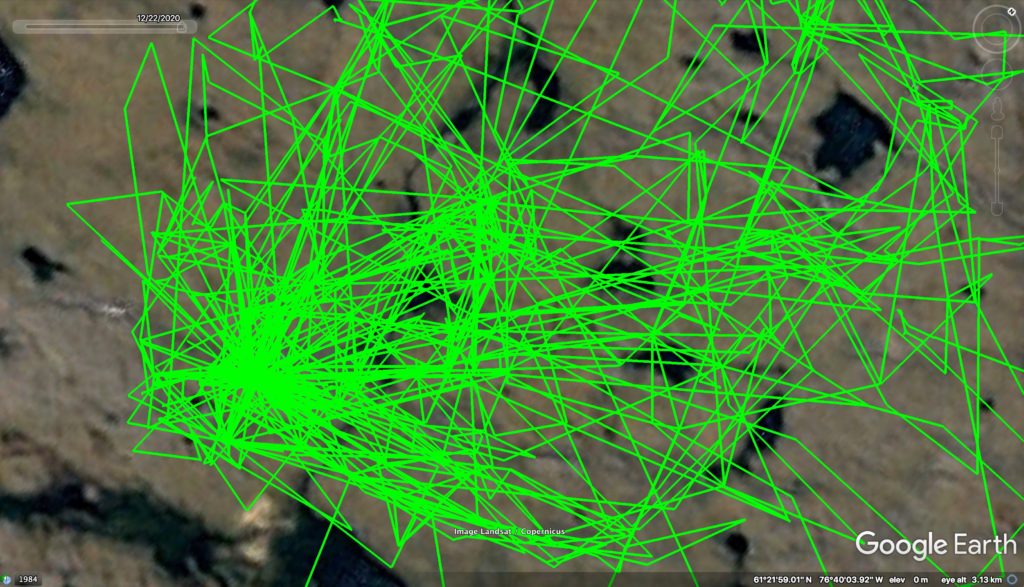 That densest concentration of tracks in the lower left? That was Simcoe’s nest site. (©Project SNOWstorm and Google Earth)

There she, like Dorval and the adult male Redwood, whom we tracked to the Ungava this summer, settled down to nest — the cluster of thousands of points through June and July make that clear. During that period, she rarely strayed more than a few hundred meters from her nest site, an area of about 70 ha (170 acres).

She expanded her movement range significantly in mid-August, when the chicks would have been gaining more independence and beginning to do some of their own hunting. She did a huge loop around the northwestern tip of the Ungava in late September and October, not starting south until Oct. 25. This time she hugged the coast of Hudson Bay, then cut across James Bay and spent early November south of Akimiski Island on the western shore, then loafed for several more weeks at Hannah Bay, the southernmost point on James Bay, close to where she had stopped in April. 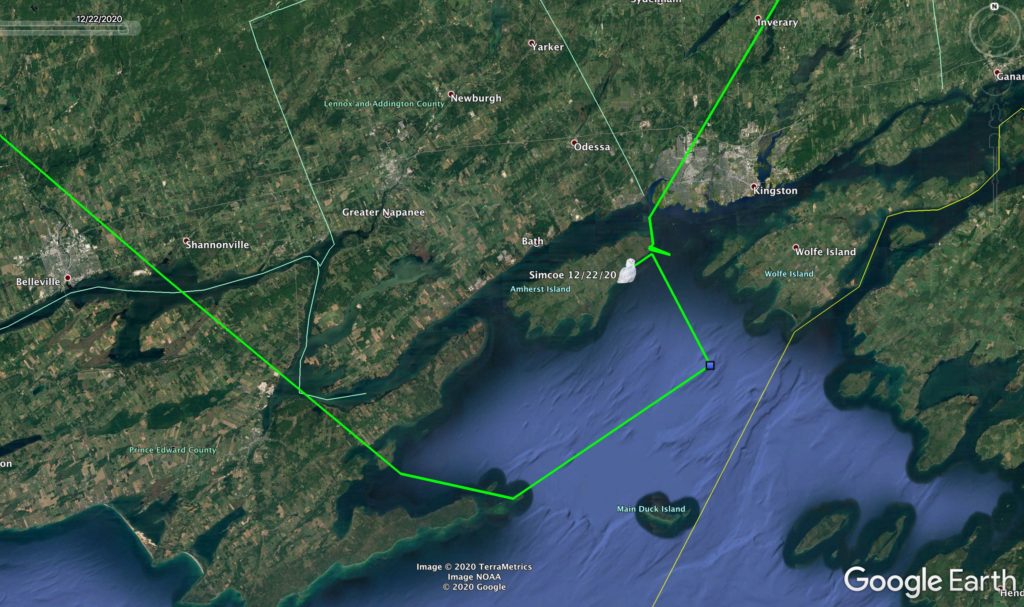 Closing the circle — Simcoe’s route out to Pigeon Rock in Lake Ontario, and back up to Amherst Island from were she started. (©Project SNOWstorm and Google Earth)

Dec. 12 she left again, moving south for the next 10 days across southwestern Quebec and into Ontario, passing through Algonquian Provincial Park, Prince Edward Point and out into Lake Ontario. After a brief rest on the tiny island of Pigeon Rock –a spot she had visited several times last winter — she flew the last 13 km (8 miles) back north to Amherst.

Her return to Amherst will not only bring a familiar face back to an island that really, really loves snowy owls, it will provide us with more of the data we initially tagged Simcoe to collect. She is one of four snowies we’ve tagged since a large wind farm began operating on Amherst, so we can compare their movement data to those from a number of snowy owls we tracked on the island prior to the turbines’ construction. This information should help us understand to what degree,  if any, industrial turbines alter the behavior of this species, which prefers landscapes with wide, unbroken horizons.

In the meantime, you can enjoy following Simcoe’s wanderings yourself — all of her movement data is ready to explore on her interactive map. And if you’re in a position this year to help, we’d be grateful for your tax-deductible donation, which is the sole support Project SNOWstorm receives. (And for the many generous folks who have already helped out — we can’t thank you enough.)

6 Comments on “An Early Gift: Simcoe’s Back!”