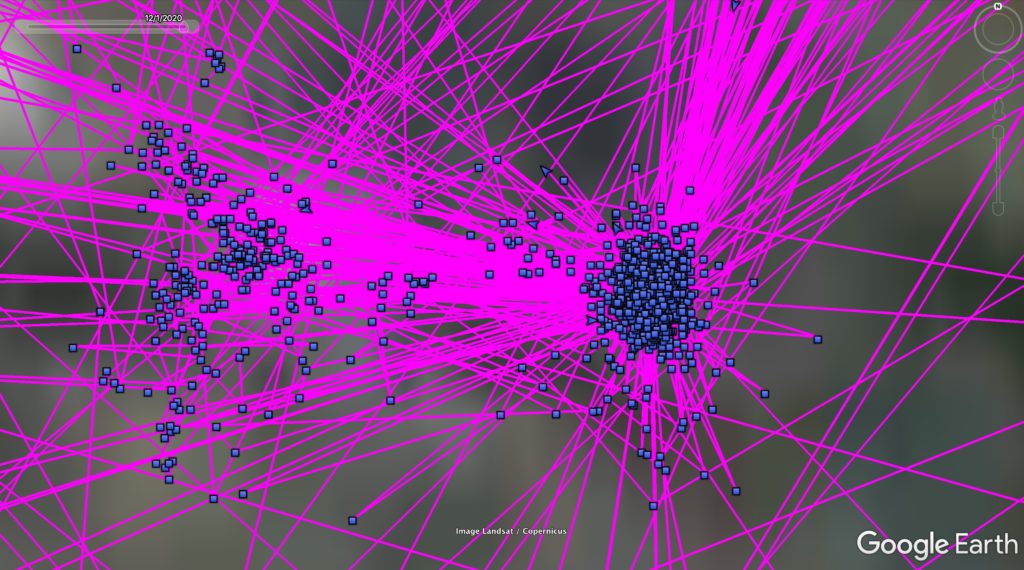 Dorval’s tracking data shows her nest site and, about 80 meters to the west, a perch she used, mostly after her chicks left the nest. (©Project SNOWstorm and Google Earth)

One thing you can say about Dorval — this is an owl that doesn’t waste time.

Dorval checked in Tuesday night with more than 10,000 GPS locations, stored up in her transmitter since late last March when she left the Montréal area and migrated north. We’ve had a chance to comb through her data, and it’s a fascinating look at an owl with a mission.

This adult female, now at least seven years old and in the prime of her life, was trapped last January at the Montréal airport by Falcon Environmental Services, which provides wildlife services at the airfield. She was tagged by McGill University Ph.D. candidate (and SNOWstorm team member) Rebecca McCabe, and relocated away from the airport. Dorval is one of 42 such airport relocation owls we’ve tagged, part of our on-going work to understand the best ways to relocate such birds so they stay away from the planes. 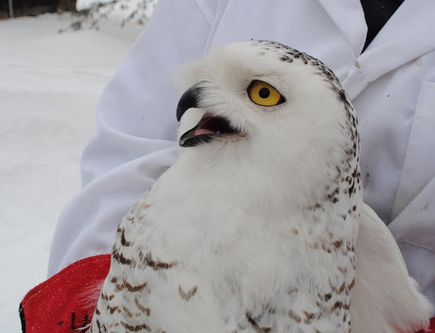 Dorval was originally banded at the Montréal airport in 2017, then trapped, tagged and relocated (twice) last winter. (©Rebecca McCabe)

Dorval was an especially interesting subject. She had already been caught and banded at the airport by Falcon’s biologists in 2017, and even after being moved 68 km (42 miles) into Ontario last winter for release, she came right back to the airport. Retrapped (re-retrapped?) a week later, she was moved yet again, this time to farmland across the St. Lawrence in southern Québec, where several other tagged owls were wintering. That time, she stayed put.

Her last data transmission was March 21, as she was starting to move north. (Remember, our normal GSM-based transmitters only send us data when they have a cell signal, so once an owl is out of cell range, the unit simply logs the GPS locations in its memory banks until the next connection, months or even years later.)

Most of the owls we track take their time heading north, sometimes lingering for weeks at stopover sites. Not Dorval. She beelined north through central Québec, migrating 2,561 km (1,591 miles) in just two weeks. By April 5 she was just a few kilometers from Hudson Strait at the northern edge of the Ungava Peninsula, about 16 km (10 miles) east of the town of Salliut, the second-most northerly Inuit community in Québec’s Nunuvik region. 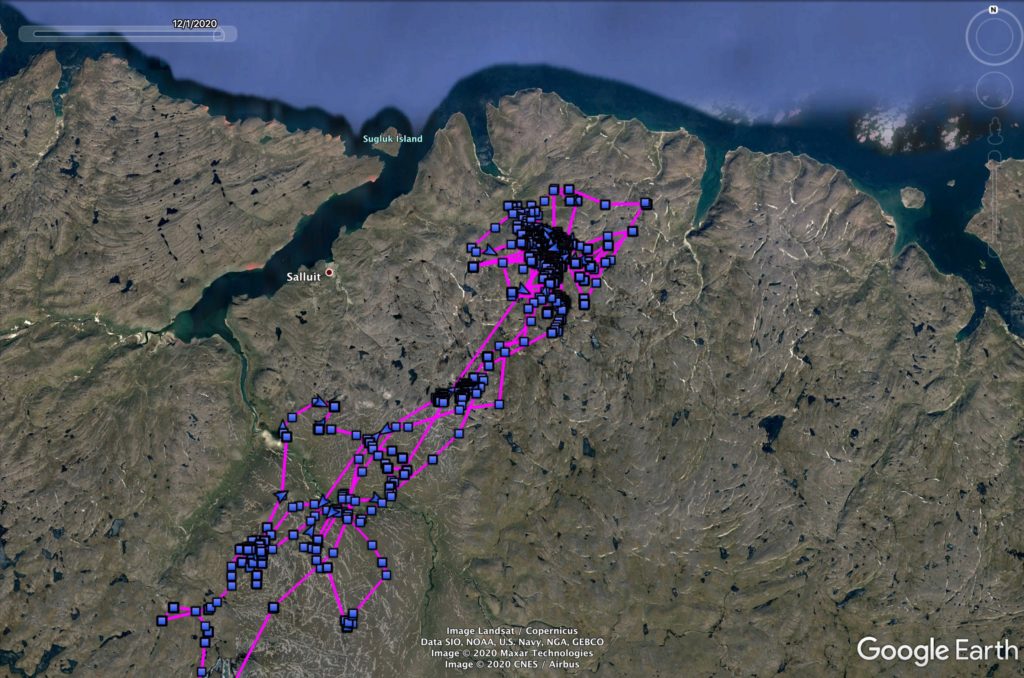 Why did she make such a rapid, direct flight? Well, we know that Dorval is a fully mature snowy owl, unlike Columbia and Stella, two much younger females who dithered on their northern migrations and wandered all last summer with no sign of settling down or nesting. Dorval had work to do, and she immediately zeroed in on a breeding territory. The last two weeks of April she moved around an area of about 6,340 ha (more than 15,000 acres), likely be courted by one or more prospective mates.

Snowy owls do not maintain pair bonds from year to year, in part because they can be highly nomadic from one season to the next. A male snowy will perform an elaborate combination of aerial and ground displays to attract a female — first, flying with deep, exaggerated wing beats and an undulating pattern, often carrying a lemming in his bill, finally drifting to the ground with his wings held in an upright V — his flashing white wings can be seen for miles. If the female flies in, he’ll then move to his ground display, raising his wings and keeping his back to the female, walking in a tight circle. 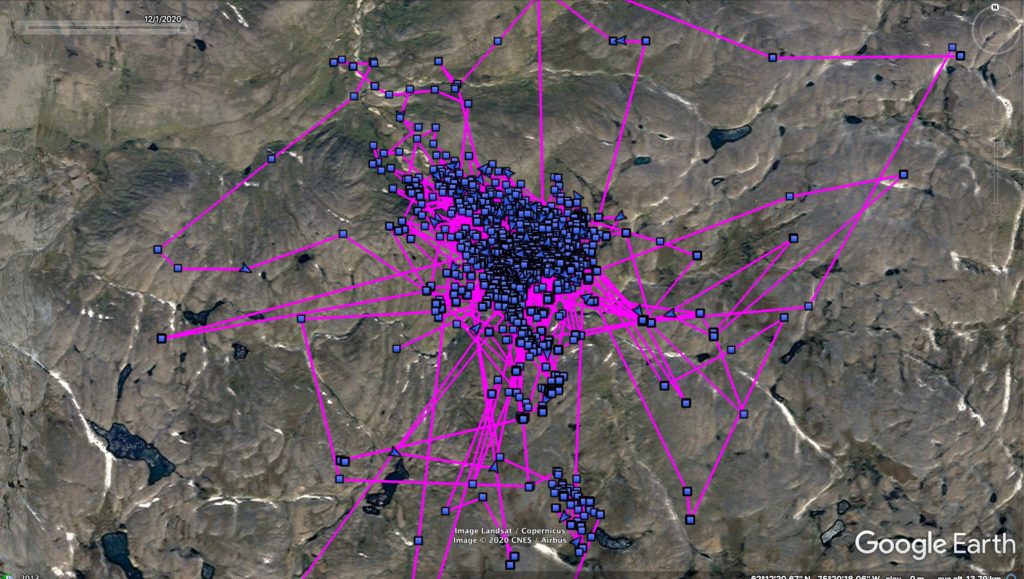 For a couple of weeks after arriving, Dorval moved around a large (6,300 ha/15,000 ac) territory, before settling down with a mate to nest. (©Project SNOWstorm and Google Earth)

That must have done the trick for Dorval, because by the beginning of May she appears to have settled into a nest site on a rise beside a small, nameless tundra stream. Like most snowy owl nests, it would have been on a dry, windswept site with a good view in all directions. Her data shows an incredible concentration of GPS points at the nest itself, but also a perch site about 80 meters to the west. She did not begin to use that site with regularity, though, until late June and early July, probably about the time the chicks — by then roughly three weeks old — would have left the nest and scattered across the tundra to avoid predators. Still flightless, they would remain dependent on their parents for food and protection for weeks more.

From late April to the beginning of September, Dorval remained in a roughly 500-hectare (1,300-acre) territory, likely caring for her unknown number of chicks during much of that time. She left it Sept. 12, and for the next two months took a more leisurely amble south through western Ungava and around Hudson Bay. 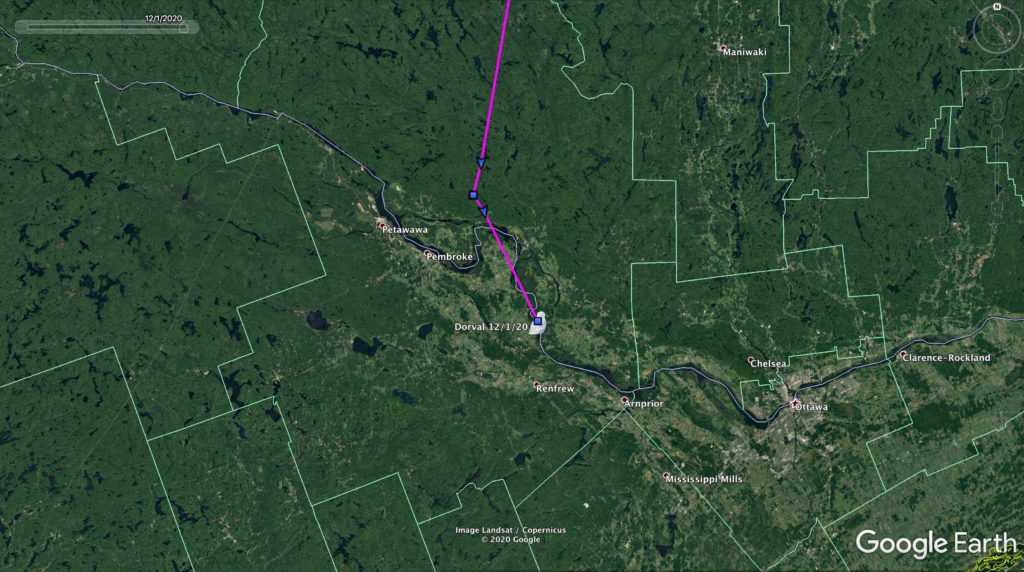 The western Ottawa River valley, where Dorval reappeared Dec. 1, is a known hotspot for snowy owls, including several of our tagged birds. (©Project SNOWstorm and Google Earth)

That changed Nov. 28, when she made another long, rapid flight south, traveling 1,248 km (775 miles) in three nights of migration, arriving on the Ottawa River in southern Québec in the early evening of Dec. 1.

As we noted in our last post, the area she was in Tuesday has been a magnet for other wintering snowy owls in the past — though much will depend on whether prey populations are strong in that area this winter. So, will she stay, or will the lure of the Montréal airport lure her back for yet another dangerous winter dodging planes? The next few weeks should tell us.