Erie’s movements since coming off the ice of Lake Huron a couple weeks ago. (The map is rotated, and north is to the upper left.) (©Project SNOWstorm and Google Earth)

As promised, here’s the second half of our weekly update, covering the tagged owls in the Midwest.

We had several no-shows this week, and have fielded a few worried emails from folks who wondered what has happened to Alma, for example, who hasn’t checked in since mid-February, or Prairie Ronde, whose last transmission was earlier this month.

In both those cases, their transmitters’ voltage was declining slowly, and apparently dipped below the threshold at which they can connect to the cellular network and send us data. That doesn’t mean the units are not working — they continue to collect GPS coordinates even at that lower voltage — but if they don’t recharge fully it may be a while before we get those stored data.

(A lot of the voltage issue seems to be linked to the behavior of the individual owl. Most snowies sit facing the sun, so their solar panels are usually in shade — but some like to tuck up close to large objects, like farm machinery, hay bales or ice floes, which further block the sun. Others like to preen their back feathers over the transmitter. There’s no way to predict such behavior, but we wish they were all like, say, Baltimore, who manages to keep his unit at almost full charge all the time.)

Buckeye, the former Michigan owl transplanted to Ohio in February, was also absent last week. Her voltage had been fine, so we assume she was simply out of cell range when the witching hour (7 p.m. EST on Thursday) rolled around. But she had been moving north previous week, and there’s still plenty of ice on Lake Erie and Lake St. Clair, which were less than 50 miles (80.5 km) from her last position — an easy flight. If she’s out on the ice, it would explain her silence.

Up in the “thumb” of Michigan, Erie checked in this past week, still in the same general area of Huron County where he’s been for a couple of weeks, since coming in off the ice of Lake Huron. One of his favorite spots is a steel pasture fence along the edge of a dairy farm near the little town of Ruth, Michigan (amazing what you can determine by using the “street view” feature of Google Earth). 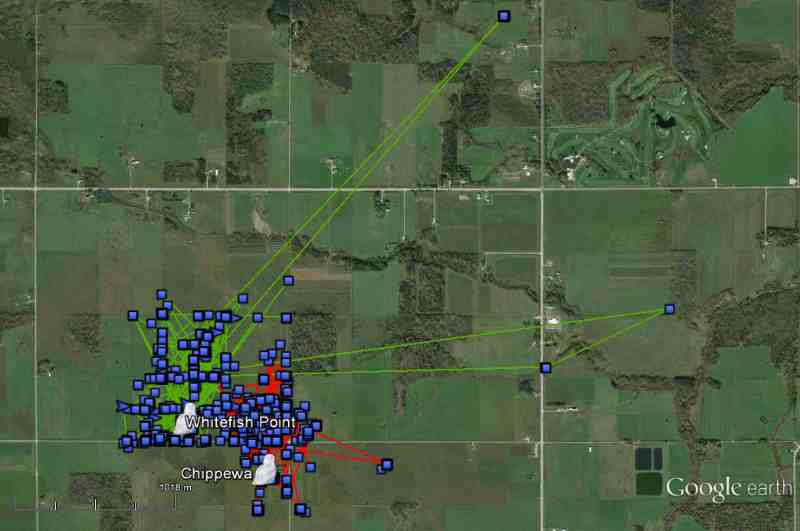 Whitefish Point and Chippewa’s cheek-by-jowl territories, which show that Whitefish occasionally makes some longer trips away from her home base — although for these stay-at-homes, “longer” means less than 2 miles (3.3 km). (©Project SNOWstorm and Google Earth)

You’ll recall that we thought Chippewa might have bolted north, since she didn’t check in on March 12, and local reports indicated a number of snowy owls in the eastern U.P. of Michigan had disappeared in the wake of mild weather.

But on March 19 she was still on her territory, as was her next-door neighbor Whitefish Point. They continue to observe very strict boundaries, for the most part, as you can see from these maps of their movements — although Whitefish Point tends to wander a bit farther afield, and Chippewa occasionally intrudes on what would appear to be Whitefish’s territory, roosting on a house and a field perch that Whitefish Point more typically uses. 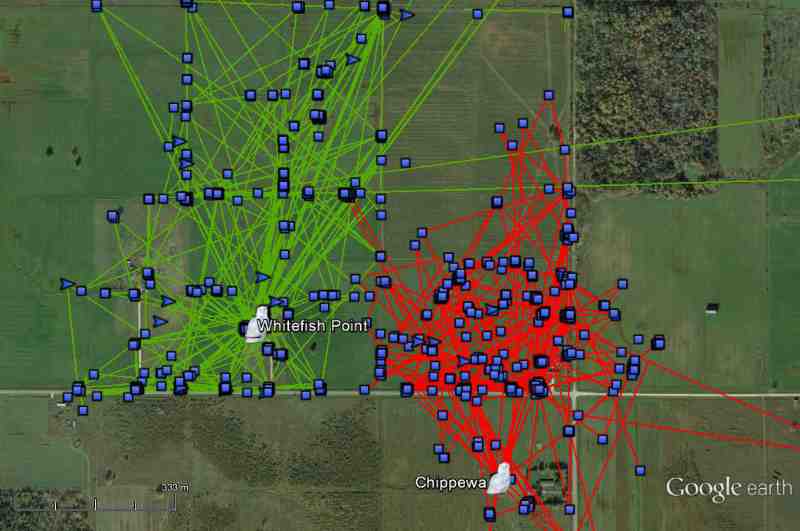 A closer look at Whitefish Point’s and Chippewa’s winter ranges — with only a few points of overlap. Chippewa sometimes intrudes and perches in Whitefish, while Whitefish only flies through Chippewa’s territory, never lingering. (Project SNOWstorm and Google Earth)

One thing we’ll be looking at, after the season is over, is whether these incursions ever took place when the other owl was close by, or if they represent a sneaky intrusion when, say, Chippewa knew Whitefish Point was out of sight. Or perhaps they were the result of direct aggression, with one bird actively displacing the other, less dominant owl — it will be fascinating to dig into the data to find out. 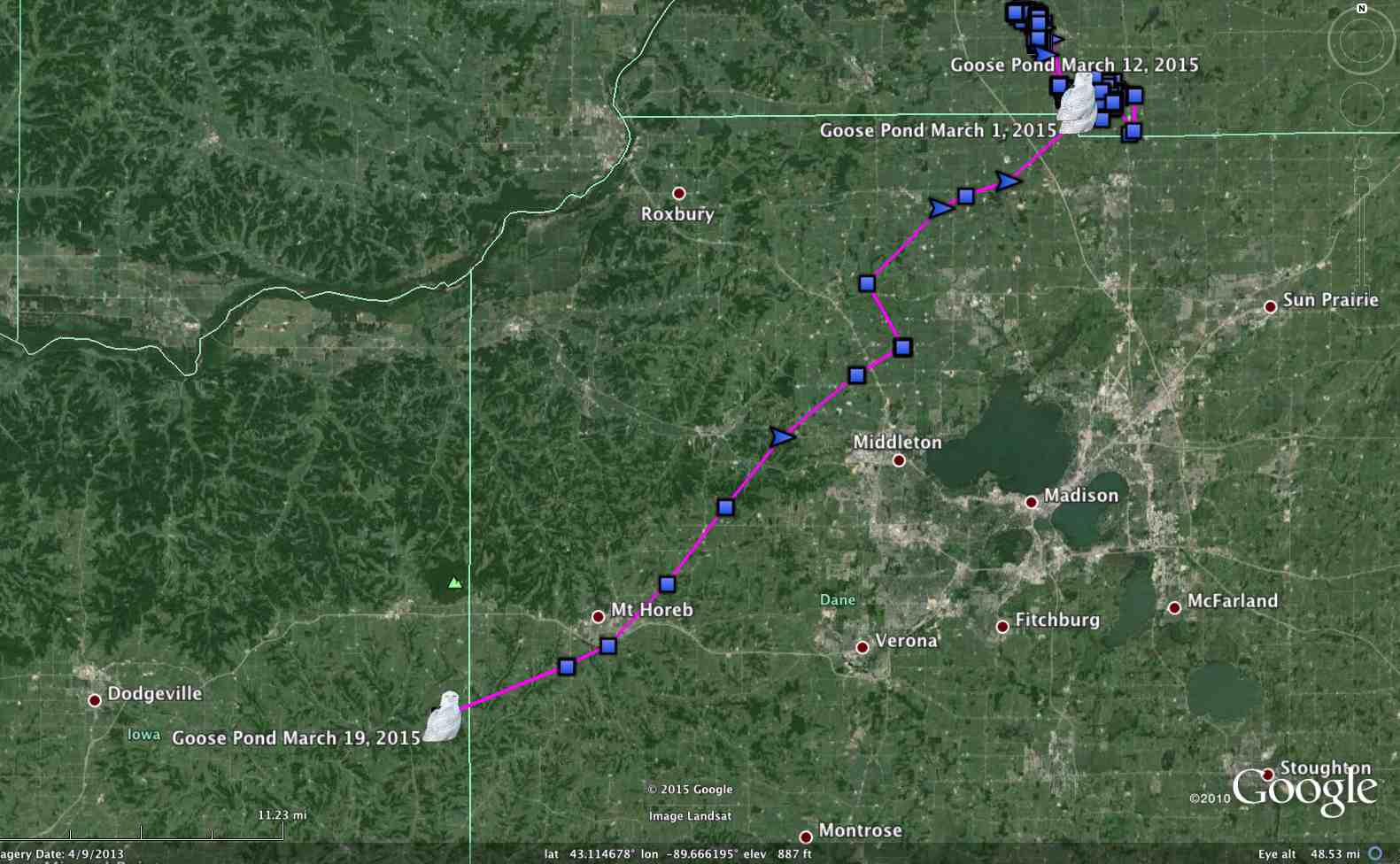 The Wisconsin owls have been a restless bunch. We didn’t get a transmission from Reedsville, who the previous week had been moving steadily west and was last heard from in the middle of Lake Poygan. But Goose Pond, who had spent the winter near Arlington, WI, after being relocated from an airport, took off a few hours before midnight on March 18.

He made a wide detour around Waunakee and Madison and moved almost 40 miles (64 km) to the southwest, crossing Dane County and fetching up in Iowa County, WI, a few hours after daybreak on the 19th. That’s where he was still hanging out when his transmitter dialed home to CTT’s server in Pennsylvania and uploaded its data.

Thanks for a Hugely Successful Campaign
Updates from the East

4 Comments on “And Now: The Midwestern Owls”