Amishtown, one of the 22 snowy owls we tagged last winter, on a snowy morning in Lancaster County, Pa. (©Alan Richard)

Welcome to the first blog update of the 2014-15 winter season from Project SNOWstorm. Whether you’ve been following our progress from the very start, or just joined the excitement, we’re glad you’re here.

Project SNOWstorm is a collaborative effort, involving dozens of researchers, banders, wildlife veterinarians and pathologists who are studying the movements of snowy owls. The project started last winter with the largest irruption of snowy owls in the East in perhaps a century, and was made possible by an outpouring of support from organizations, agencies and hundreds of private donors.

Among other accomplishments, we tagged 22 snowy owls from Minnesota to Massachusetts with latest-generation GPS/GSM transmitters to study their movements on the wintering grounds in unprecedented detail.

It’s been four months since our last post — the sad news that Oswegatchie, one of our tagged snowy owls that had been hanging around a huge gold mine in Malartic, Quebec, had been found dead.

We expected a fairly quiet winter coming up, but there are indications that another snowstorm may be in the air. Probably not of the magnitude we saw last winter, but there have been a remarkable number of snowy owl reports in the Midwest and East already this month. 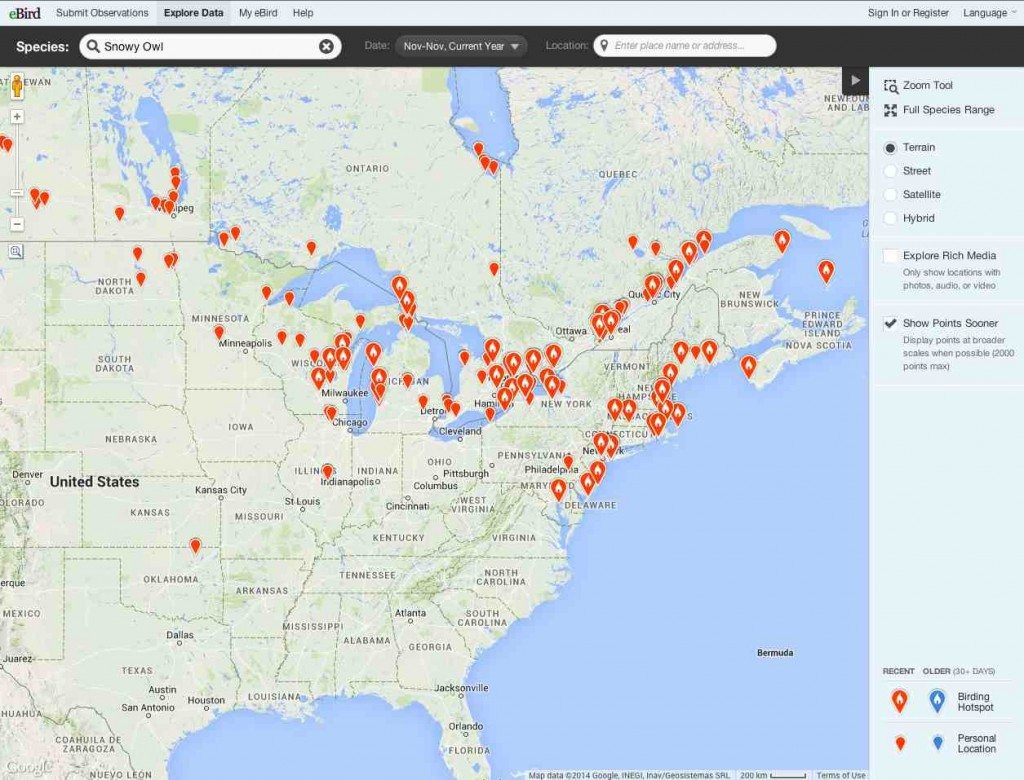 Reports of snowy owls in November to eBird — already a much larger number than we’d been expecting this winter. ©eBird

As of mid-November, snowy owls had been reported by the dozens in the Northeast and Great Lakes, including birds as far south as Illinois and Maryland. One snowy owl that made it all the way to Oklahoma, unfortunately, was killed Sunday by a vehicle.

Last year’s mega-irruption was caused, in part, by a record nesting season in northern Quebec. This year, researchers from Laval University in Quebec, who have been studying snowy owls in the Arctic for years, encountered record numbers breeding on Bylot Island in Nunavut. Generally, when there are large numbers breeding there, a good winter irruption follows in the East, but we’ll have to see how the flight shapes up.

(Our SNOWstorm colleague Jean-François Therrien, who is part of the Laval team, has promised a firsthand report on the breeding season work on Bylot. Watch for J.F.’s update here soon.)

There are some interesting differences from the last invasion. The first indication of last winter’s irruption was the appearance of hundreds of snowy owls in Newfoundland, weeks before they showed up in numbers farther south. This winter, there’s been nary an owl seen in Newfoundland. And the irruption zone extends farther west, into North Dakota. (There are good numbers already in the Canadian prairies, where snowy owls are annual winter residents.)

We’re ready for more owls. Our plans — based on an assumption we’d have a non-irruption year, with mostly adult snowies making it south — were to deploy an additional 7-10 transmitters. With indications there may be a bigger flight, we’ll be looking to increase that number, and we’ll be launching some fundraising efforts in the weeks ahead, much as we did last year. More details to come on that, too.

But what about last winter’s owls? We knew of several, of course, that didn’t survive the winter — one killed by a jet strike, two that drowned, and Oswegatchie at the mine, dead of unknown causes. But most moved north in March and April, moving beyond the cellular phone network that enables their transmitters to communicate with us, and have been out of touch ever since.

How they’ve fared since, we can’t say. We obviously hope some of them come south again soon — their solar-powered transmitters have been continually logging 3-D GPS locations every 30 minutes. But if they skip a flight south, as adult snowies are known to do, the units will keep on working — in fact, the transmitters have enough storage capacity for more than 12 years‘ worth of data. If and when they come back in range, we’ll get all that stored data.

If that happens, though, it’s gravy — the main focus of Project SNOWstorm is to track their movements while they’re down here on the wintering grounds, and the enormous amount of data we got last winter from those tagged owls has been a gold mine that we’re still analyzing.

But I’d be lying if I said I wasn’t hoping to see the first of our 2013-14 birds pop up again on the cell network, sending us a text message with thousands of precise locations, showing us exactly where in the Arctic they’ve been this summer.

Will it happen? I’m confident, but I also realize it may not be this winter. Satellite tracking by SNOWstorm cofounder Norman Smith in Boston, by J.F. and his colleagues, and others has shown that some snowy owls remain north in the winter — in fact, some go even farther north and winter on the Arctic pack ice.

In the meantime, we’ve been busy, especially the team of wildlife pathologists and veterinarians who have been conducting necropsies and tissue samples on the many snowy owls that were collected last winter, the victims of collisions, electrocutions and other accidents. The results have been fascinating, and shed useful (and disturbing) light on the kind of chemical environment these Arctic migrants encounter down here. More about that another time.

We’ve also been sorting through the thousands of photos that people all across the irruption zone uploaded last winter to www.projectsnowstorm.org. Those photos are helping us paint a remarkably detailed picture of the age and sex distribution of last year’s irruption — and we’re going to ask for the public’s help in that respect again this winter.

Will there be more adults, or will it again be an overwhelmingly juvenile flight? Will males or females make it farther south? Will this be strictly an eastern and Midwestern event, or will the Plains and Northwest see their first irruption in several years? Every report to eBird (ebird.org) and every photo uploaded to our site helps answer those questions.

So get ready for what promises to be another exciting winter, and thanks for your continued support of Project SNOWstorm. We’ll be blogging regularly, and our website will be getting a needed update in the weeks ahead, too.

Report from the Arctic
Oswegatchie update

25 Comments on “Another SNOWstorm?”