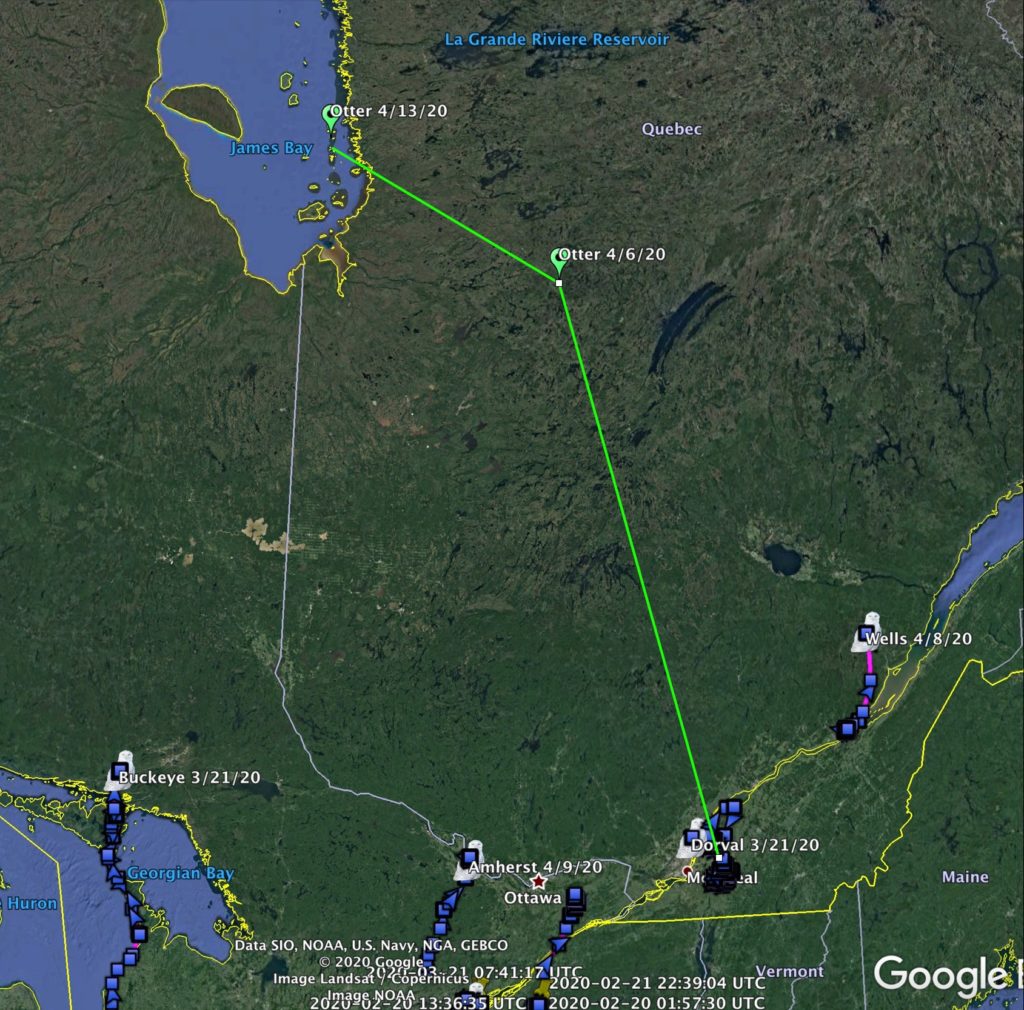 Thanks to his hybrid GPS/Argos satellite transmitter, we’re keeping track of Otter as he moves up the coast of James Bay. (©Project SNOWstorm and Google Earth)

This time of year, we can see some really dramatic changes — and that certainly has happened within the past week or so. We’ve gone from 15 owls in regular contact to just six, as most of the rest have apparently migrated out of cell range. 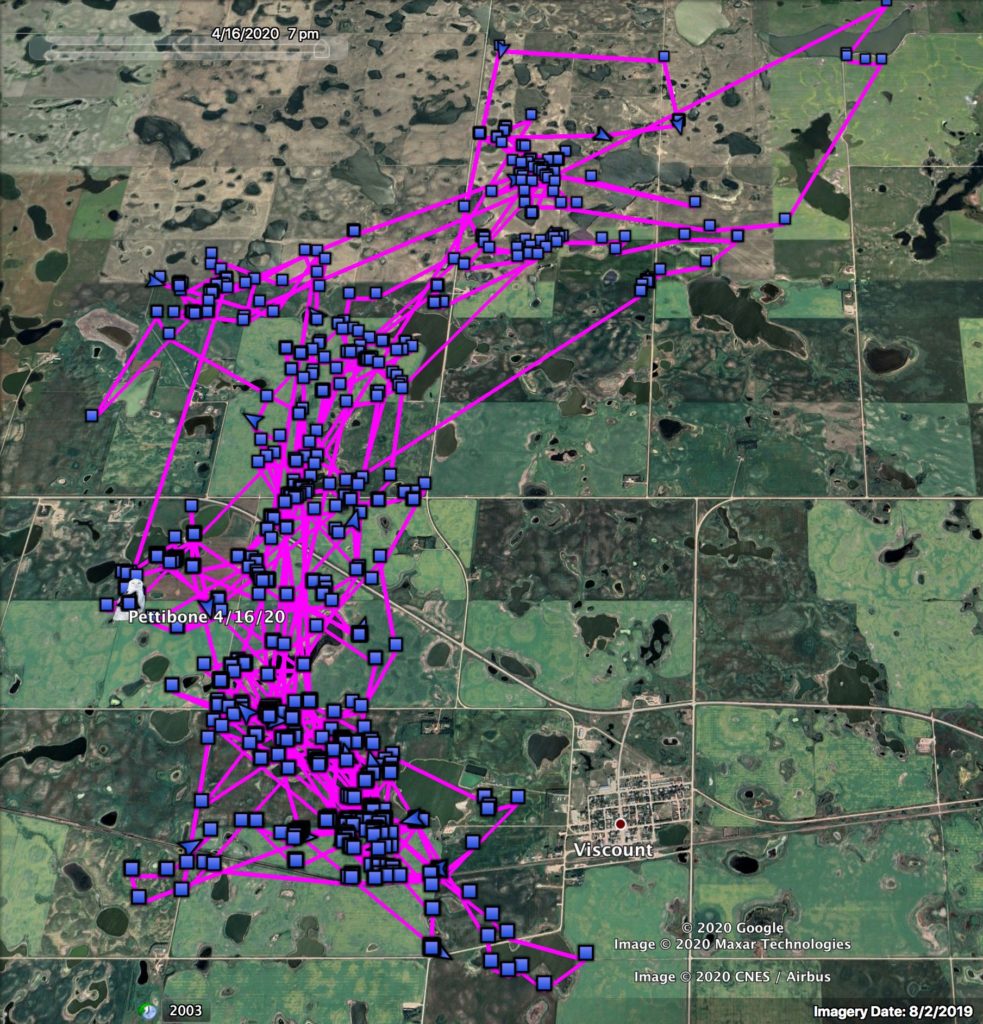 Pettibone remains on the fields and grasslands near Viscount, SK. (©Project SNOWstorm and Google Earth)

Perhaps not surprisingly, two of the owls that wintered farthest north — Pettibone in Saskatchewan, and Stella in southern Manitoba — haven’t shown any recent sign of moving. Pettibone had shifted north to near Viscount, SK, a couple of weeks ago, and remained there as of his last check-in on April 16, while April 9, Stella was still on her winter territory near Whitewater Lake at Boissevain, MB.

Within two weeks, we went from three snowies in the Dakotas to none — at least, none that were transmitting (it’s always possible a bird was in a cellular dead zone during its thrice-weekly transmission windows). Pearl and Medina, who were in North Dakota, haven’t checked in since April 6 and April 1, respectively, and there’s a very good chance they made a rapid migration north into regions with little cell service. 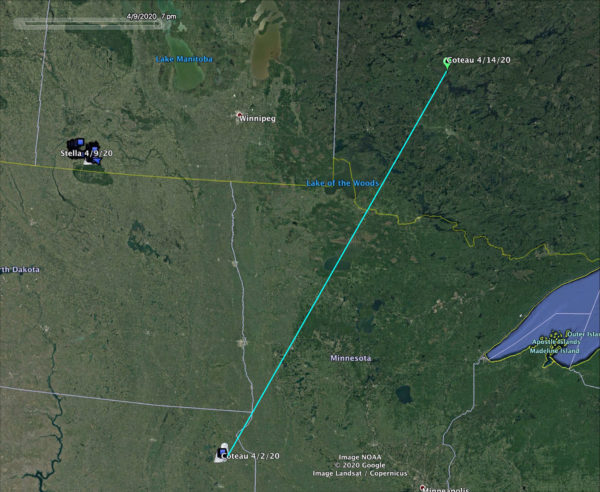 Coteau sent just enough of a signal this week that we know she was in northwestern Ontario. (©Project SNOWstorm and Google Earth)

Coteau, who had been in eastern South Dakota, did the same — but she checked April 14, just barely. We got a truncated transmission from her with no data, but enough signal to peg her location — deep in the boreal forest of northwestern Ontario, some 660 km (410 miles) northeast of her last location. She was near Lac Seul, and the closest town is the evocatively named Ear Falls, ON. The region, about 150 km (95 miles) from the Manitoba border, is the heart of the range for the increasingly beleaguered woodland caribou.

Neither Columbia, who was last heard from moving northwest across North Dakota on April 4, nor Fond du Lac, who was on Green Bay, WI, April 1, have checked in since. Chances are both moved so rapidly north that they have left the main cell network. 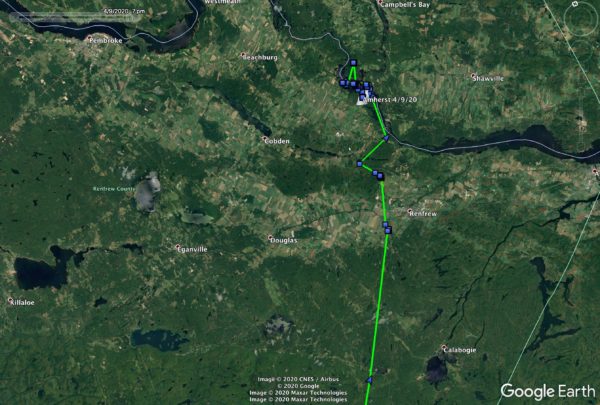 On April 9, Amherst was just north of Hardscrabble’s old winter territory near Cobden, ON, on the Québec border. (©Project SNOWstorm and Google Earth)

As we noted previously, Yul was already well to the north of most cell towers in southern Quebec when she last checked in March 28, Dorval has been off the grid since March 21 and Redwood since March 22. Simcoe, who on March 28 was still on Amherst Island, pulled a similar disappearing act — the mild weather at the end of March and early April seems to have pushed a lot of owls north in a hurry. Amherst, however, did check in on April 9, from an area along the Ottawa River valley familiar to SNOWstorm fans — just north of Cobden where our oldtimer Hardscrabble spent two winters, and just northwest of where he and Baltimore spent several more. 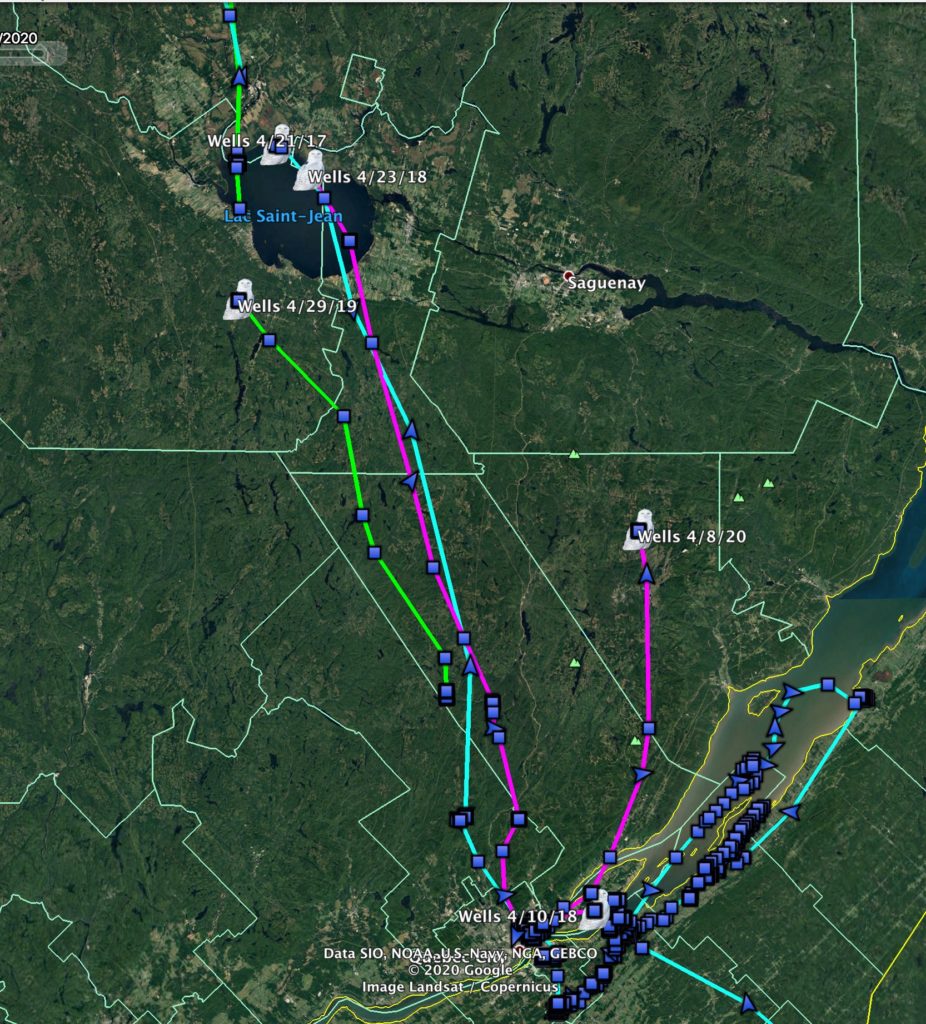 Wells is taking a slightly more easterly track north this year, compared with 2017, ’18 and ’19. (©Project SNOWstorm and Google Earth)

Wells ended her third winter in Québec City on April 8, heading north around in the hours before dawn and then setting down for the day in a huge clearcut 47 km (30 miles) northwest of Bai-Saint-Paul. This is a track just a bit east of her usual path north, as you can see from this comparison of her previous three migration routes.

The most exciting news, though, was from Otter, whose hybrid GPS/Argos satellite transmitter checked in April 13, showing that he was on the ice near Pebble Island, part of the archipelago in southeastern James Bay. The nearest town, about 40 km (25 miles) to the northeast, is Wemindji — a Cree community on the Maguatua River where one of our earlier owls, Pickford, also stopped on her way south in October 2018.

Pickford was close enough to pick up Wemindji’s cell signal, while out on the bay, Otter was apparently too far away for that — but if he moves closer to town, we might get the last few weeks of detailed GPS data from him instead of the single location the Argos satellite fix provides. Still, it’s great to know his Argos unit is still working, even without its external antenna. If we’re lucky, it will continue to do so every Monday as he moves back to his Arctic nesting grounds, and we’ll be able to share regular updates about him — and Amherst, who is also carrying a hybrid unit — even after the we lose the other snowies.