Baltimore in February 2015, newly tagged and about to be released on the Maryland coast. (©Chris Hudson)

We’ve tagged more than 40 snowy owls in the past three years, and every one of them has given us insights and surprises. Like parents with a large family, we try not to have favorites.

But it’s fair to say that in our eyes, Baltimore is first among equals. We initially banded him as a juvenile in his first winter (and ours), in 2013-14, when he was caught at a small state airport near Baltimore, Maryland. Too small for the transmitters we were then using, he was banded and released in western Maryland, away from the hazards of an airfield.

The next winter he was back, though, at the same airport. This time we gave him a GPS backpack (generously underwritten by the Baltimore Bird Club) and moved him to the coast, where he spent the winter, then delighted SNOWstorm followers by making a northbound migration straight through the middle of Manhattan.

Last winter Baltimore reappeared in mid-December, and settled down on Amherst Island, the justly famed owl mecca at the eastern end of Lake Ontario. He spent the whole winter there, after downloading data that showed his remarkable wanderings in the Canadian subarctic the previous summer, during which he covered thousands of kilometers in the northern Ungava Peninsula. The more than 14,000 GPS locations we got from his travels made Baltimore the most closely-followed snowy owl in history.

Baltimore vanished rather abruptly in late March. One day he was on the Ontario coast just north of Amherst, and then he was gone — no hits from the cell network across southern Canada. This was a little disquieting; while it’s certainly possible for a bird to cross the fairly sparse Canadian cell network in a day or two between transmissions, we couldn’t be sure that something bad hadn’t befallen our well-traveled bird.

All we could do was wait and see if he came back. Even if he was OK, there was no guarantee he’d come south, because some adult snowies — and Baltimore was now an adult — stay north in winter. Some even move farther north from the breeding grounds, wintering on Arctic sea ice.

But about 7 p.m. on Christmas night, Baltimore checked in for the first time this winter — quite a nice holiday gift, and his fourth winter as part of our study. He was near the little hamlet of Cobden, Ontario, along the Ottawa River — and coincidentally, less than 4 km (2.5 miles) from one of our other returning owls, Hardscrabble. 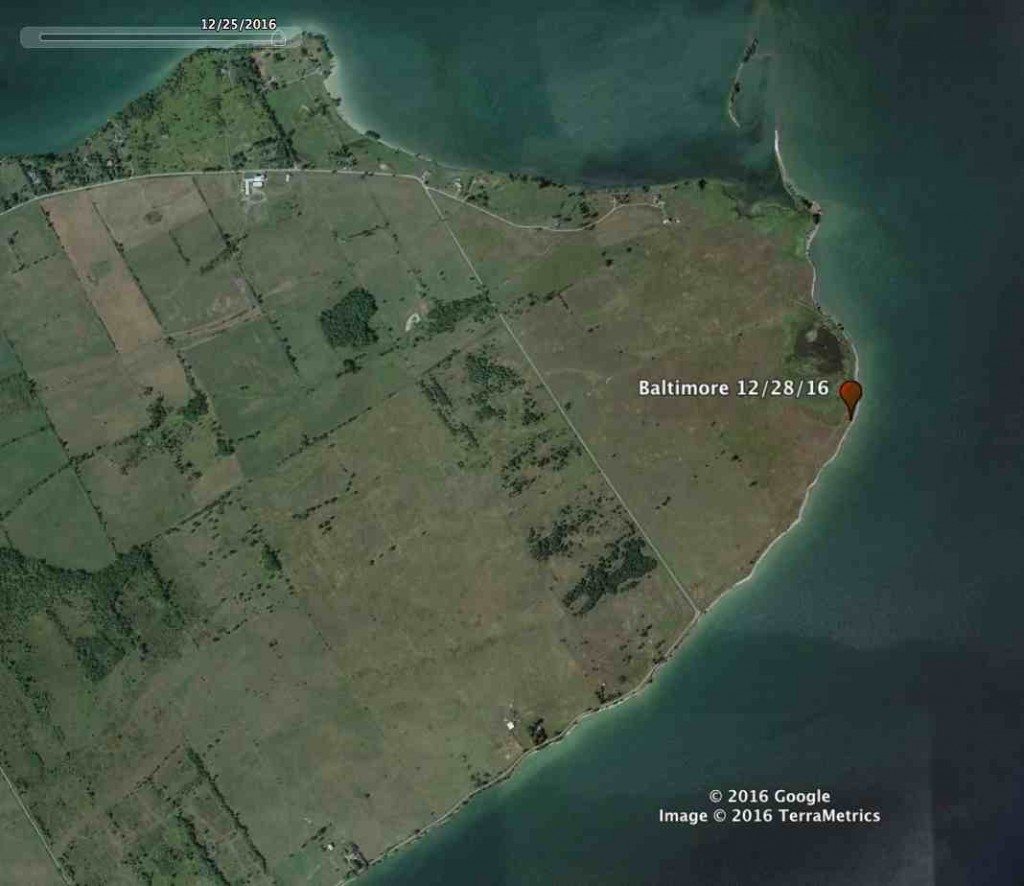 Wednesday night Baltimore sent up another digital flare, and this time he was back on his old stomping grounds — Amherst Island, at the extreme eastern end, to be specific. Whether he remains there, we suspect, may depend on what the vole population on Amherst is like this winter. Last year the voles were at a cyclical peak on the island, attracting large numbers of snowies, rough-legged hawks and other raptors. But if the vole population has crashed, there may be less incentive for owls and hawks to stick around.

Having stayed north so late in the season, Baltimore’s solar-powered transmitter likely went into hibernation until he got far enough south to get some daylight, and even now it’s battling poor weather and low sun angle to get recharge its voltage. But we’ve already started recovering his spring/summer data, and it’s clear why he seemed to vanish so abruptly — at the end of March he suddenly began a rapid migration north, flying more than 550 km (340 miles) due north in less than two days, right through and beyond the cell network and into western Quebec.

From the preliminary data, it looks like Baltimore was heading back to the Ungava, where he spent the summer of 2015. The big question is whether he took a mate and raised a family last year. By then in his fourth summer, he would be the age at which experts think snowy owls can first breed — but no one’s ever documented the age of first nesting for a wild snowy. (It’s true that Dakota, one of our tagged females, nested last summer — but she was an adult when she was marked, and so we don’t know how old she is.)

So, will Baltimore’s data show that he spent another footloose summer wandering wherever the winds took him, or will he display the same kind of highly localized behavior that Dakota’s nesting data show? It will take a few weeks to download his roughly 15,000 data points from the preceding nine months, but as soon as we have the answer, we’ll let you know.

Incidentally, no changes to report on our other two returning owls. Hardscrabble remains in the Ottawa River valley near Cobden, ON, and Dakota is near Francis, Saskatchewan, where she’s been for the past several weeks.

In the meantime, here’s NPR’s tribute to Baltimore, which was produced last winter by science reporter Adam Cole.

Challenge Match from the Bobolink Foundation!
Eyes on Dakota