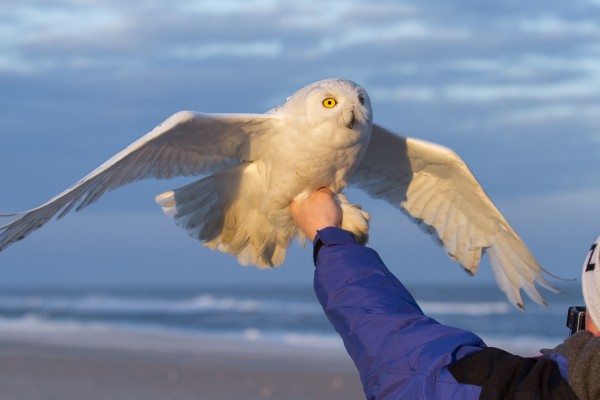 Meet Baltimore, a returning owl from the winter of 2013/2014. He was only banded last year, but is now being tracked with a GPS/GSM transmitter. (©Chris Hudson)

We’ve had the return of Monocacy which was quite a pleasant surprise. I had really been hoping one of our Maryland owls would return and she did. Monocacy had originally been trapped at Martin State Airport and relocated to Western Maryland for her safety. But she was only half of the story. 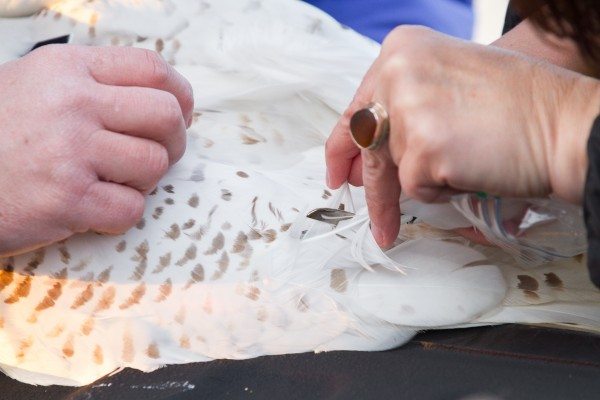 A small sample of feather material is collected from Baltimore. Isotopes accumulated in the feather as it grew during the summer, analyzing them will allow us to determine where he spent the season. (©Chris Hudson)

The day after Monocacy was trapped, last March, we received a call from the APHIS Wildlife Services staff at the airport that they had trapped a second owl overnight. This owl, a male, was also relocated in western Maryland near Middletown in Frederick County. The release site was in a park surrounded by open farm land where we hoped he would spend the winter. It was wide open habitat with lots of food; rodents, flocks of horned larks, even ponds with wintering waterfowl. However, upon release he flew up until I could barely see him through binoculars and then made a bee-line to the east. Perhaps he went back to Baltimore as Monocacy did. We don’t know because we didn’t put a transmitter on him. He had received only a band after a full exam by veterinarians from the Maryland Zoo, myself and fellow owl researcher, Melissa Boyle. 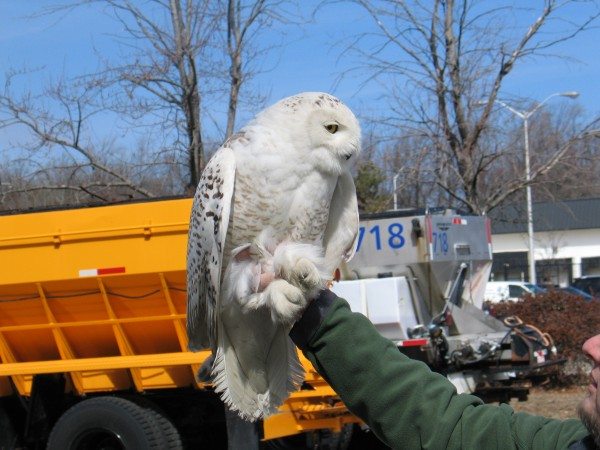 Baltimore when he was first captured in March 2014

I was getting ready to head to class this past Friday morning when Dave Brinker called (as with most of our tales this one also begins with a phone call). An owl had been caught at Martin State airport by APHIS Wildlife Services and it was one we had seen before. Turns out it was the male we relocated the same time as Monocacy in our first season of Project SNOWstorm. It is an amazing coincidence that two owls trapped so close in time and space were caught in the same week, but even more surprising that one had returned to the exact same place where it was originally trapped! We know that snowy owls sometimes return to the same location in subsequent winters from other research projects, but this was the first for us. 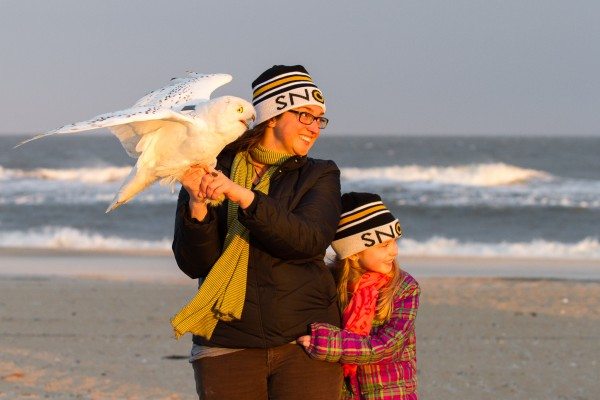 Carrie Samis, of the Maryland Coastal Bays Program, and her entourage, are ready to release Baltimore. (©Chris Hudson)

Baltimore, now with a transmitter funded by the Baltimore Bird Club, was released on Assateague Island on Valentine’s day. He is now a “third year” owl and we hope the hunting skills he has learned in the past 20 months will tell him this coastal area, with plenty of waterfowl, will be a better place to winter than an airport. With the first check in, shortly after release, Baltimore had left the island for the mainland. Will he head west for Baltimore or is he just exploring? We’ll be able to learn how successful this relocation is as we can now track the movement of these wide ranging owls. His interactive map will be put online when he checks in sometime next week.

You can help us continue this work by making a contribution through our Indiegogo fund raising campaign. No amount is too small and all proceeds go towards transmitters and the analysis of DNA, feather and blood samples. These items and services are provided to us at cost by our generous suppliers. The labor and administrative effort is all done by volunteers who share a love for these owls and the science behind the Project. 100% of your donations go to pure science! 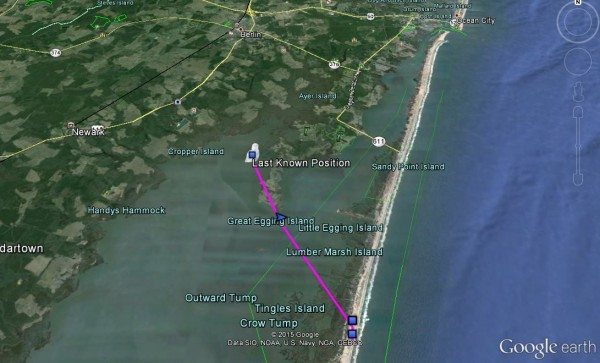 Baltimore’s first hours. Is he headed back to Baltimore or just exploring? (©Google Earth and Project SNOWstorm)