Delaware received the best medical care from The Maryland Zoo and expert evaluation from wildlife rehabilitators at Owl Moon Raptor Center and Tri-State Bird Rescue and Research during her nine months in captivity. However, her wing injury had been corrected with a new technique and we had yet to see how she would manage when returned to the wild.

Her release site, Assateague Island, was chosen for its natural setting and plentiful prey. It is home to wintering waterfowl and many small mammals, a larder for a hungry owl. That selection was the first step in making her transition as easy as possible.

We also kept a close eye on her, using reports from boots on the ground and through thorough review of her movements as revealed through her GPS/GSM transmitter. We were looking for signs of normal. Here is a sample of a biologist’s interpretation of her first few days from Dave Brinker.

“After her release on Thursday afternoon Delaware spent the evening in the man-made dunes of Assateeague State Park.  By about 7 PM she had found what would turn out to be a favorite perch, a speed limit sign in the campground, and she stayed there until midnight.

Around 1:30 AM  Friday morning she moved further south to an identical speed limit sign and hunted from it  until 3 AM before moving back to the northern sign.  Near dawn she wandered along the dune line north and as far south as the National Seashore day use beach before settling in for her mid-day rest on the back side of the primary dune.  She rested until beginning to forage just after dusk in the undeveloped area between the state park and National Seashore day use area.  By 6:30 PM she was perched on top of one of the small bath houses that she repeatedly used as a perch while hunting the nearby area until about 1:15 AM on Saturday morning.

The rest of the night she hunted the area from near the northern end of National Seashore Oceanside campground to the very southern end of the state park campground.  Delaware spent Saturday morning loafing in the national Seashore group campsite area before moving north and south along the primary dune line.  She was much more active during the day today than she was on Friday.  The early part of the evening was spent hunting the same area that she had worked all day long, eventually working her way back north to perch on the southern speed limit sign that she’d used early Friday morning.  She perched on the sign from about 7:40 PM until just after midnight. 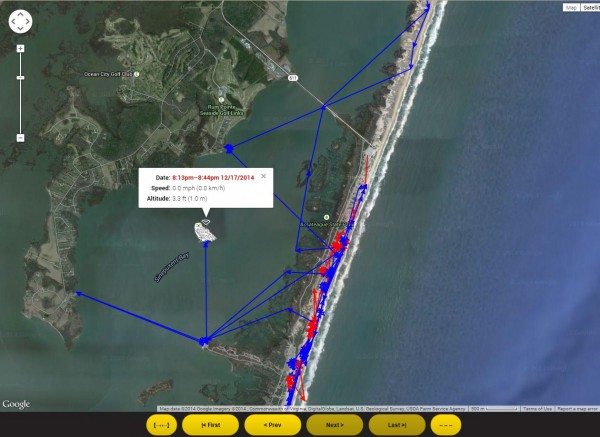 Delaware is on the move, behaving like a normal owl

Early Sunday morning she moved further north in the state park where she perched on top of the primary dune from about 1:30 AM until dawn.  For most of the daylight hours on Sunday she moved about the northern portion of the State Park campground.  Surprisingly she did not spend any extended amount of time perched in one location.  At dusk Delaware made her first movement away from the primary dunes and beaches of Assateague over to the edge of the marsh along Sinepuxent Bay; beginning to hunt the waters of the bay for waterfowl for the first time since her release!  This is a behavior that we observed in many Snowy Owls doing last winter and it was a good sign that she was beginning to resume typical hunting behaviors.  She ranged widely crisscrossing the bay a couple of times by 9:45 PM before she spent about 4 hours perched on a piling looking for waterfowl over the bay.  By 2 AM she returned to the primary dunes and beaches of Assateague.  Over Sunday night and Monday morning Delaware traveled further than she had any night so far.

Monday Delaware spend a quiet day resting perched in the top of a salt spray stunted Loblolly Pine in the Assateague State Park campground.  Near dusk she moved over to a bath house roof for an hour before again flying west to the salt marshes for a night of hunting waterfowl over Sinepuxent Bay.  From her initial point along the bay shore she flew south to the western tip of the bayside causeway within the National Seashore where she spent time surveying the bay from atop an information sign.  Her evening travels again found her crossing the bay heading over to the South Point boat ramp and back to Assateague by about 1:30 AM on Tuesday.

Upon returning to Assateague she hunted the beach area until dawn.  As the night was ending she finished her hunting from the eastern end of the boardwalk and observation platform at the northern end of the National Seashore day use parking lot.  About dawn Delaware went to roost on the primary dune near where she roosted during the day Friday.  She spent all day in essentially the same spot never moving more than a few meters until dusk.  Delaware’s first foraging of Tuesday evening was up and down the beach including using the end of the observation boardwalk as a perch from ~ 7 PM until midnight. 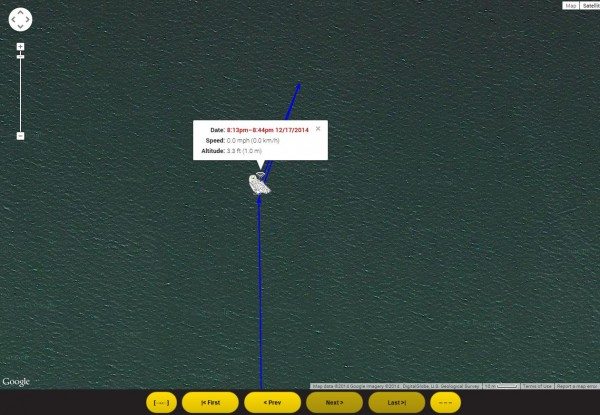 Delaware is not swimming or hovering over the Sinepuxent Bay, she’s sitting on a new island!

From then until about 2:30 AM she hunted the beach as she had earlier in the evening, including another visit to the observation platform.  Once she settled in for the day Delaware roosted in the dunes very near where she had the night before.  Dusk found her heading west to the bay shore and the roof of a canoe rental shack near the same information sign that she’d used Monday evening.  From there Delaware headed out to the newest piece of real estate in the Maryland coastal bays – a newly created island that was built using sand dredged from the navigation channel in Sinepuxent Bay.  This small island was built in November and does not yet show on Google Earth imagery.  It is hoped that the island will eventually be an important breeding site for colonial nesting waterbirds, but it is already proving to be an important piece of wildlife habitat being use by migrating shorebirds and now Delaware.” 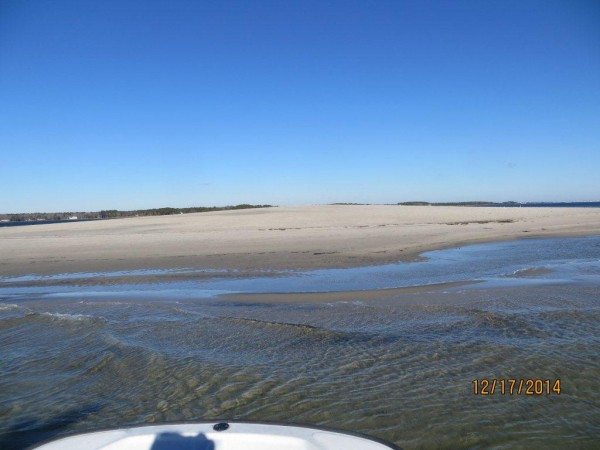 Zooming in on Google Earth allows us to see detailed habitat but the imagery isn’t always current and some features are just too small to see. Dave has spent a lot of time working on Assateague and is very familiar with much of the island, allowing him some insight we may not otherwise have.

As of today Delaware is still moving about normally and we’re very pleased with her progress. She is behaving as we would expect, just like other owls we’ve monitored. You can follow her progress on her interactive map.

She is currently on a three day check-in cycle, but we’ve reprogrammed her transmitter ‘on the fly’ to a seven day cycle. This extends the wait between updates, but it will minimize drain on the battery of the unit. All of our owls will be on a seven day cycle this season.

6 Comments on “A Biologist’s Eye View”