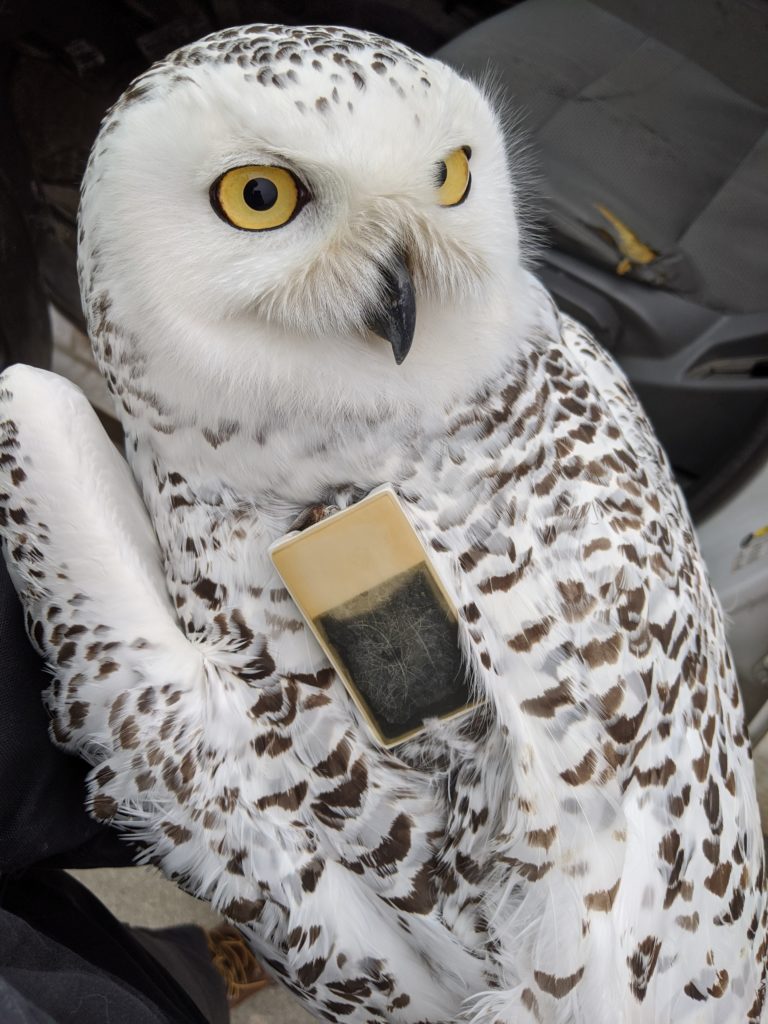 Back after a long absence, Buckeye looked great when she was retrapped this week in Detroit. (©Selena Creed)

On Tuesday, as my wife and I were rushing to meet her family for a Christmas Eve gathering, we got an email and an urgent message through Facebook from Selena Creed, a wildlife biologist at Detroit Metropolitan Airport (DTW) in Michigan. She’d just caught a snowy owl on the runway — and it was wearing a backpack transmitter. Could it be one of ours, she asked, and should she remove the unit or leave it in place when she relocated the bird to the countryside?

I knew it wasn’t one of our current owls; none have checked in anywhere near Detroit. I dug out my computer from amid all the wrapped gifts and overnight bags in the car, and while standing in a parking lot looked up the band number Selena sent. I wasn’t overly optimistic. After all, we’re not the only researchers using telemetry on snowies; the Laval University crew in Québec uses satellite tags on snowy owls in the Arctic, and several colleagues of ours are using transmitters on owls in the Canadian prairies. It could easily have been one of theirs.

But –bingo! To my surprise and delight, the band number matched Buckeye, a bird with a history at Detroit Metro, and one of the more interesting birds we’ve ever tracked.

Buckeye was a third-year female captured by DTW airport biologists twice during the winter of 2014-15. On the second occasion she was fitted with a transmitter by Mark Shieldcastle from Black Swamp Bird Observatory in northwestern Ohio and released Feb. 15, 2015 near Oak Harbor, OH. (Her transmitter was underwritten by BSBO and the Kirtland Bird Club.)

She quickly headed back west and north, and appeared to be making a beeline back around Lake Erie toward Detroit, but she turned back at Toledo and instead spent the rest of the winter in rural northern Ohio — including several weeks at a small municipal airport…this bird loves airfields. 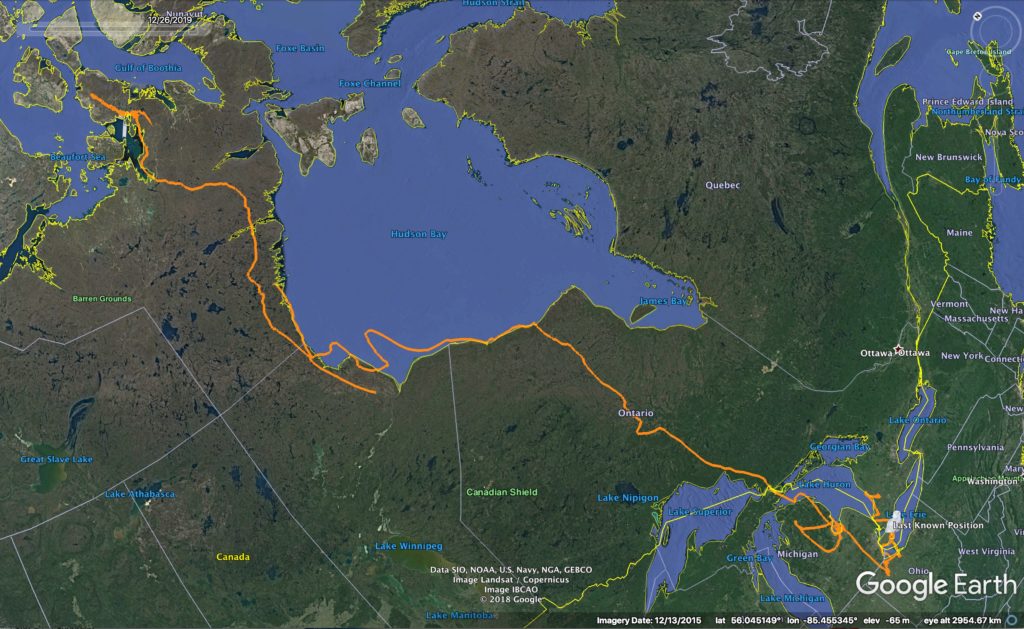 Buckeye’s 2015-16 travels, north to the Boothia Peninsula and back to Lake Erie. (©Project SNOWstorm and Google Earth)

In spring she migrated north, skirting the western side of Hudson Bay and spending the summer of 2015 in the Boothia Peninsula in the Canadian Arctic, an area we have since found is very popular with many of our tagged owls. The winter of 2015-16 she migrated south to southern Ontario and northern Ohio, although by then her transmitter was becoming unreliable. We tried to organize a trapping expedition to recapture her and trade transmitters, but were unable to do so, and the last we’d heard from her was March 21, 2016, on the north shore of Lake Erie.

Now she was back, a full adult at least six years old. Selena had tried several times to catch her along the DTW runways, trying a variety of traps and lures, but in the end Selena was able to sneak up on Buckeye as the owl dozed on a snowplow. Waiting until a passing jet’s noise masked her approach, Selena made a quick dash and actually caught Buckeye with a hand net — not the first time she’s been able to do that, she told me. 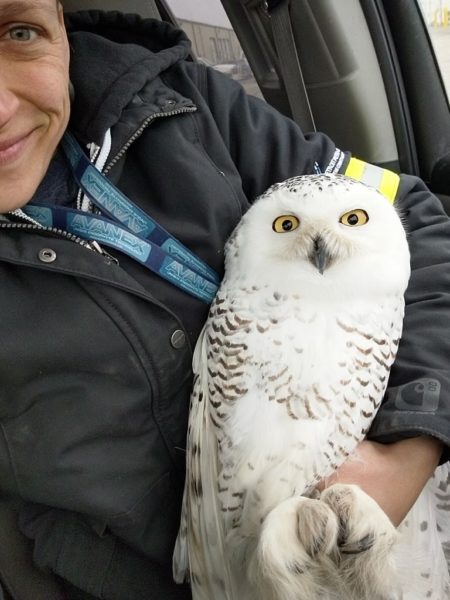 Selena Creed cradles Buckeye for a selfie not long before releasing the owl. (Selena Creed)

Buckeye looked to be in great condition, Selena said, and the harness and transmitter were riding well and causing no problems. As you can see in the photo, the transmitter’s solar panel has seen some wear, with a lot of scratches, but otherwise it looks sound. While we won’t know for sure until the wizards at CTT get their hands on it, there’s a chance that the transmitter may have backlogged data from the past nearly four years stored in it, which would be a real treasure trove. Even if it doesn’t, removing a failed unit from a bird is always a great thing to do.

But what about a replacement? By coincidence, SNOWstorm co-founder Dave Brinker and his family were scheduled to head right through that area a day or two later, and he had a transmitter in hand. Selena made arrangements to house Buckeye temporarily with a local rehabber, and then Dave would bring a new transmitter, replace the old one, and we’d be back to tracking Buckeye.

That would be the real storybook ending, but unfortunately, Dave’s wife became ill and the trip had to be canceled at the last minute. Selena moved Buckeye — without a transmitter, but still wearing her numbered leg band in case she’s ever caught again — into rural northern Michigan and released her Thursday night. But we’ve been coordinating with Selena and the folks at Black Swamp, and they’ll be working with us to tag additional owls from DTW this winter…including Buckeye, if she can’t stay away from Detroit.