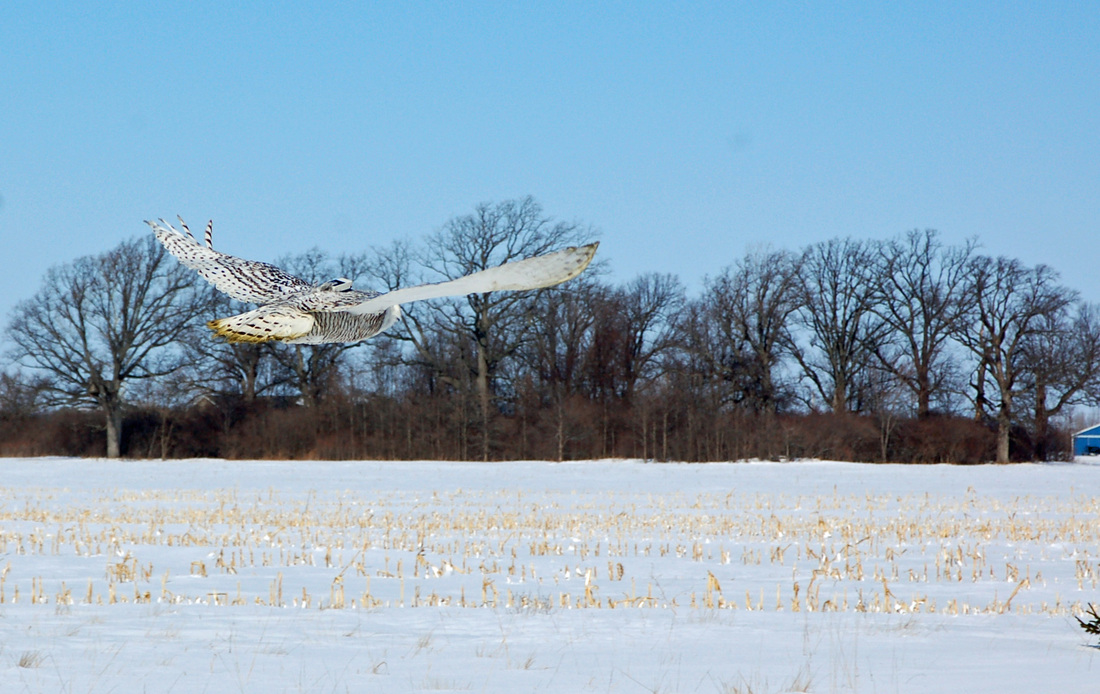 Buckeye, the first SNOWstorm owl in Ohio, takes off under a frigid winter sky. (©Kate Zimmerman)

Project SNOWstorm has its first Ohio owl — Buckeye, an adult female tagged through the cooperation of the Black Swamp Bird Observatory in Oak Harbor, Ohio, and the Kirtland Bird Club in Cleveland, along with USDA’s Wildlife Services, which trapped and relocated her.

Buckeye was a repeated offender at Detroit Metro Airport in Michigan. She was first trapped there in mid-January by Wildlife Services, relocated 80 miles and released — the standard procedure for moving snowy owls away from airports, where they are a significant plane-strike hazard to themselves and the aircraft. 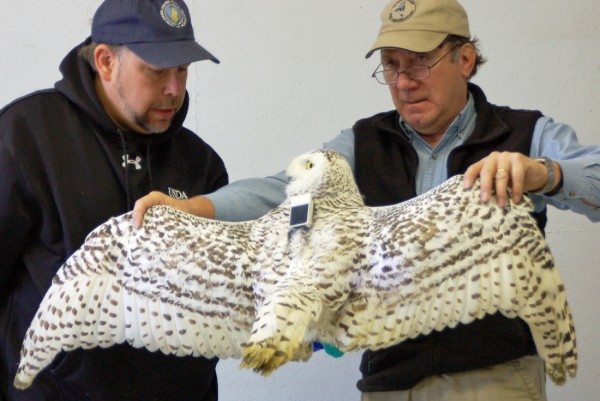 Unfortunately, she came back. Last Friday the owl was caught again at Detroit. This time, she was taken to northwestern Ohio by Dr. Brian Washburn, research wildlife biologist for the USDA. (Brian was also instrumental in tagging Alma, our first Michigan owl, and has been working with us in several states to learn more about the behavior of relocated airport owls.)

Brian and Mark Shieldcastle, research director for Black Swamp, tagged Buckeye with one of our GPS-GSM transmitters, which was sponsored by BSBO and the Kirtland Bird Club. Then she was released in open farm country in Ottawa County, Ohio, about 50 miles (80 km) south of Detroit.

This has been a long time coming. Mark and BSBO executive director Kim Kaufman had hoped to deploy a transmitter on an Ohio owl last year, but the opportunity never presented itself.

Buckeye’s transmitter was initially programmed to report daily, and the first transmission showed that she wasted no time in making tracks. She left Ottawa County’s lovely habitat as soon as it got dark Sunday night, and looped about 30 miles (48 km) northwest to Toledo. She stopped for a breather on the high stacks of the PFB refinery, south of the Maumee River, then continued north through the city.

By 5:30 a.m. Monday, when her transmitter checked in, she was less than two miles (3.2 km) from the Michigan border. We assumed that Buckeye the Ohio owl was about to become a Michigander once again.

Instead, Tuesday morning’s transmission showed she looped south of Ottawa Hills and spent the day in a commercial strip area with a lot of offices and light industrial buildings. After dark, she spent much of the night on top of an immense pile of mulch in an otherwise vacant lot – probably a great hunting spot. 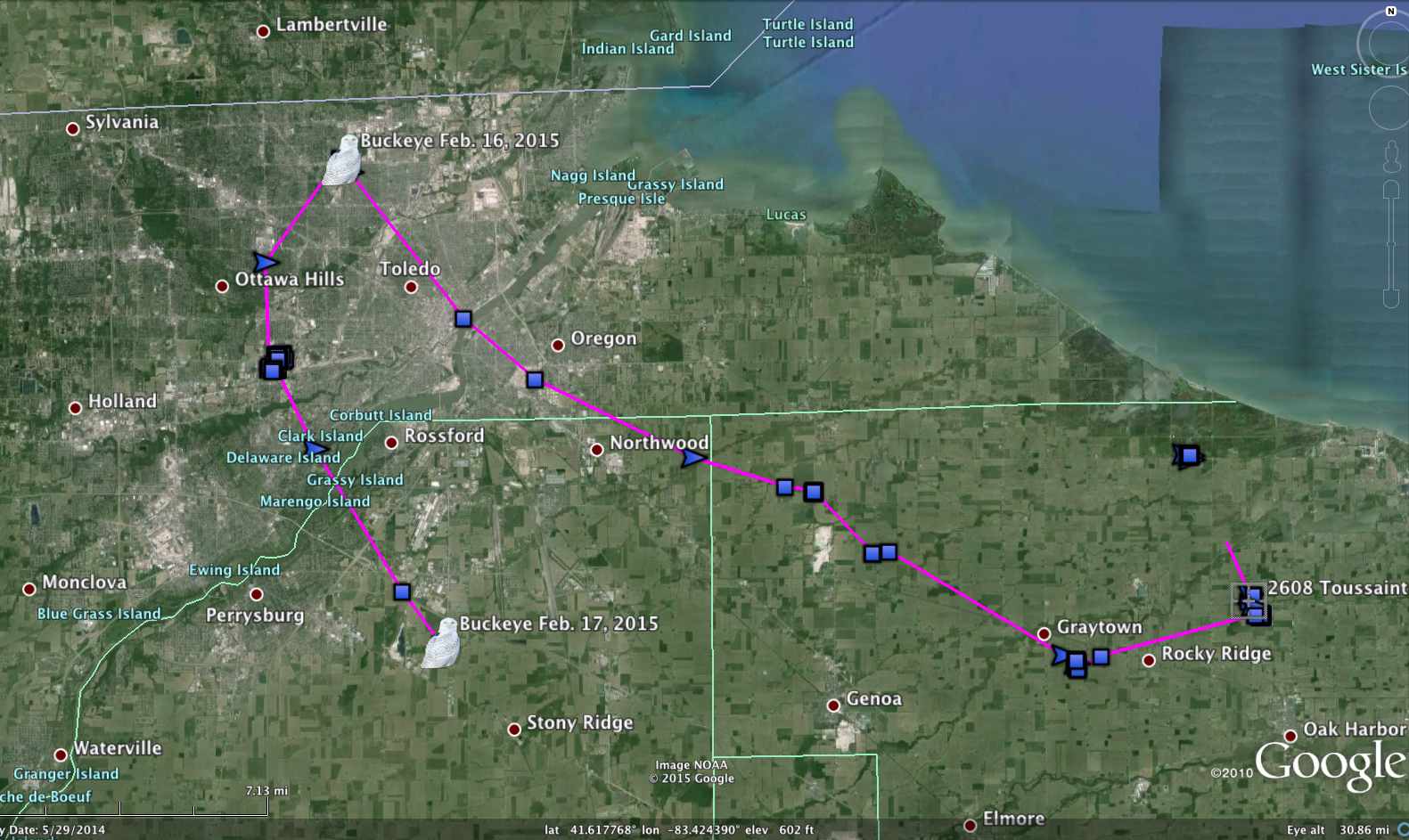 Buckeye’s almost-to-Michigan-and-back route over the past couple of days. (©Project SNOWstorm and Google Earth)

Then she took to the wing again. At 5:30 a.m. Tuesday she was flying southwest, back into the farmland of northern Wood County, right on the edge of the Toledo sprawl — and away from Michigan.

Because she’s moving so far, so fast, we’re not withholding her location data for a couple of days, as we usually do, and you can follow Buckeye’s movements on her tracking map with the most recent data.

Tuesday morning  her transmitter took up a new duty cycle, so she should check in again Thursday, and then weekly on Thursdays thereafter — an energy-saving measure to conserve battery power through these long winter nights. Depending on whether she’s still moving widely, or has settled down, we may withhold the new update for a couple of days.

Buckeye’s already proven to be one of the more interesting owls this winter, and I suspect she’s going to continue to be — although the best thing she could do is find some nice, quiet stretch of farmland and plunk herself down for the rest of the winter. Drama’s really not what we’re looking for from these birds; safety is.