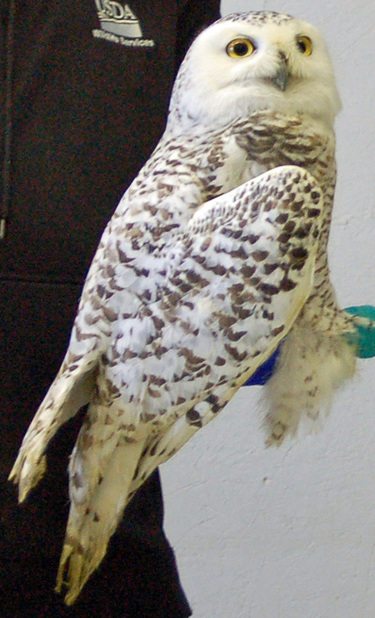 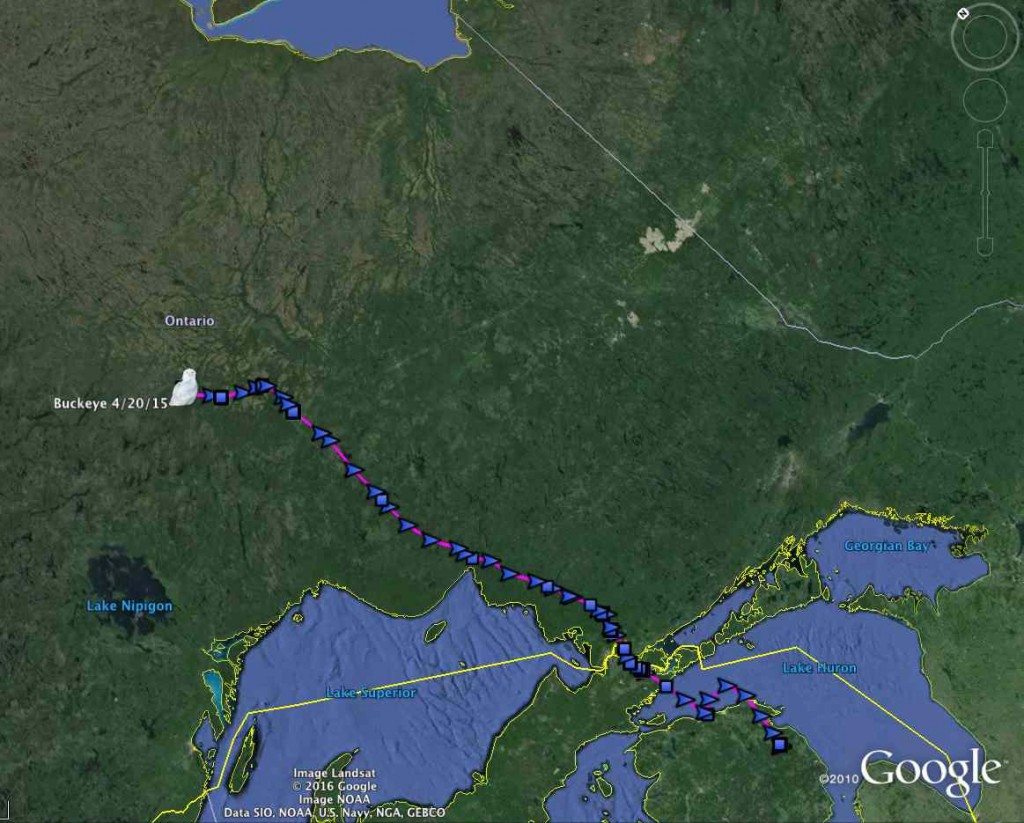 The first section of Buckeye’s spring 2015 northbound migration — we hope to quickly get the rest of her data, showing where and how she spent the past year. (©Project SNOWstorm and Google Earth)

Here in the northern hemisphere, the days are getting noticeably longer — and that’s having an effect on birds of all sorts, including snowy owls.

The past week or two we’ve started seeing some significant movement — not migration, and not necessarily northbound, but a sign of seasonal restlessness setting in. And with predictions for dramatically warmer weather across much of the East and Midwest this week, we may see the start of true northward movement very soon.

But first, perhaps the most exciting news of the past week — the return of Buckeye. 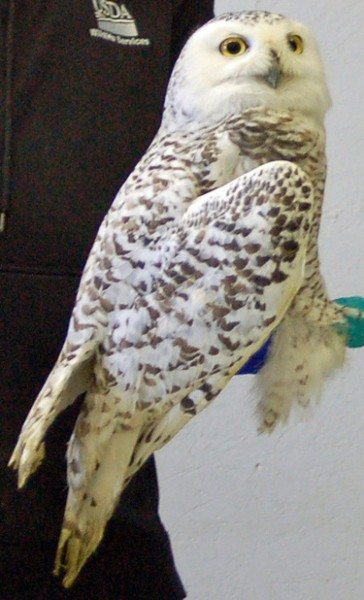 Last winter this adult female was a repeat offender at the Detroit airport, trapped and relocated a couple of times by USDA Wildlife Services before being sent south into Ohio, where our partners at Black Swamp Bird Observatory tagged and released her.

At first, you may recall, it looked like she was going to make a sprint straight back to Detroit, but she stopped just a mile or so from the Michigan line, doubled back, and spent the rest of the winter in northwestern Ohio.

We last heard from her in mid-April, after she’d begun her spring migration up Lake Huron. Her last check was April 15, 2015, on Lake Hubbard, in northern Michigan.

On Feb. 22, though, we got a single communication from Buckeye’s transmitter — no data, not even a current location, just a “Hey, I’m here!” Her unit did upload a new configuration, though, which is doing what it’s supposed to and maximizing her battery capacity.

Last night, Buckeye checked in again, and started downloading stored data. We know that she’s currently in southwestern Ontario, 41 km (25 miles) north of London, near Lake Huron. And we have the first few weeks of data from her northbound migration last spring, which took her up Lake Huron, through Sault Ste. Marie and another 515 km (320 miles) up into central Ontario, west of the southern tip of James Bay.

We’re hopeful that as her battery recovers and the days lengthen, we’ll quickly get the rest of her stored data, as we did from Baltimore earlier this winter. We can’t wait to see where she was last summer (and whether, unlike our other tagged owls, she nested).

As for the rest of the crew:

–Up in far Northeast, Casco reversed course. She had been near Grand Falls, New Brunswick, in the farmland along the St. John River, but the last few days of February she started north again. She pushed about 117 km (73 miles) across the dense boreal forest of northern New Brunswick and into the southern edge of the Gaspe Peninsula in Quebec, and the foothills of the Shickshock Mountains.

It mustn’t have seemed a very welcoming place for an owl of flat, treeless tundra. In the predawn darkness on March 1, Casco turned around and moved quickly back south again, and returned to her starting point by March 3, just a short distance outside Grand Falls.

By the way, the Bangor Daily News did a nice story about Casco and our other Maine owl, Brunswick, in yesterday’s edition. (Though the headline writer got confused about what kind of transmitters we’re using.)

—Brunswick also did an about-face, but in the opposite direction. After a couple months of barely stirring from her comfortable niche on the southern Maine coast, she lit out south on Feb. 28, flying 45 miles (72 km) south to near Cape Ann in Massachusetts. Along the way she stopped briefly on the Isle of Shoals, an offshore archipelago on the Maine/New Hampshire line, but she didn’t linger — perhaps because researchers there with the Shoals Marine Lab report a resident snowy on Appledore Island this winter.

Brunswick then began a slow amble back north along the coast, through Parker River NWR, Plum Island and, most recently, the tidal marshes near Hampton Beach, NH.

—Salisbury has been a bad owl of late, spending a lot of his time at Logan Airport in Boston, where he was originally trapped and from which he was relocated. After mostly avoiding the active parts of the airport, this past week he’s been hanging out along runway 14/32 (the newest runway at Logan, and a point of serious conflict with the local community) and the Seaport district terminals across the river. Let’s hope he watches where he flies — for his sake, and the planes’. 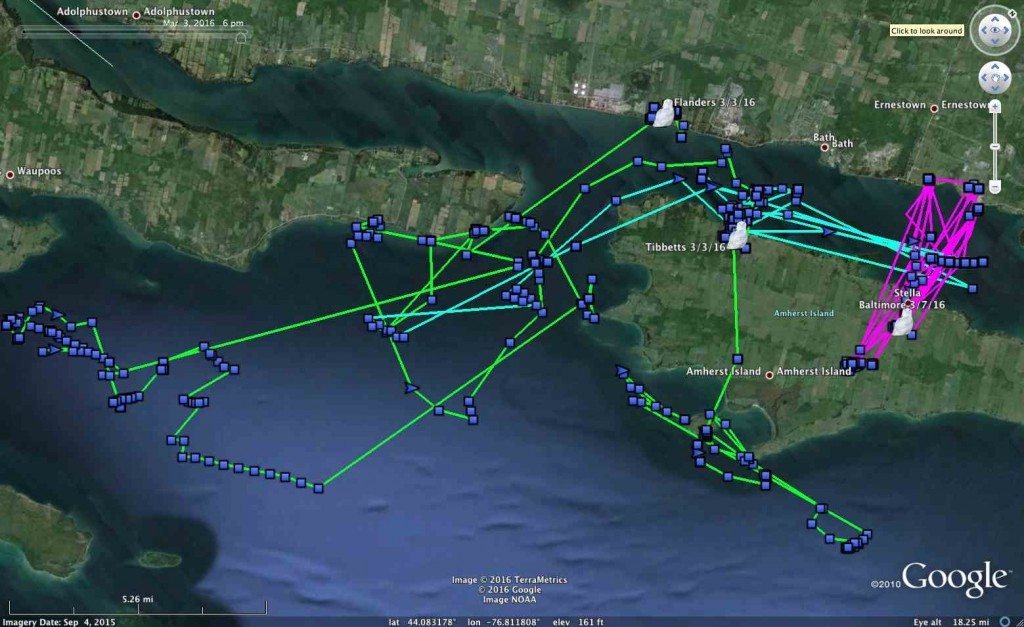 –Up on Lake Ontario, three of our foursome of tagged owls have been holding pretty tight to their routines. Baltimore and Tibbetts remain on the north side of Amherst Island, Baltimore continuing to use his winter-long territory near Stella with increasing trips to the mainland, while Tibbetts is spending most of his time on the ice. Over on the New York side of the border, Hardscrabble’s time was mostly spent on and near Chaumont Bay.

Flanders had been off the grid for a week, but she was back — and her track explained why we hadn’t heard from her. She took a 97-mile perambulation across northern Lake Ontario, floating around on ice floes off Prince Edward Point for more than a week. At last report, she was on the mainland just across the channel from the western tip of Amherst.

–Out west, Dakota is regular as clockwork in her territory in Stutts County, North Dakota, continuing to prowl the edges of the pothole lakes and marshes there on the prairie.

—Chaumont remains on Cape Vincent, NY, with a faulty transmitter, and the indomitable Tom McDonald continues to move heaven and earth to try to retrap him to recover the unit. Tom’s made multiple trips to Cape Vincent this winter, through snowstorms and car problems and other headaches, and Thursday night had his closest call yet. Chaumont was briefly caught in a bal-chatri noose, only to break free when Tom was just a few, heartbreaking feet away from him. But Tom is heading back up again to continue to retrap (and hopefully retag) that owl.

–And speaking of major efforts, our Canadian colleague Nigel Shaw and his crew have been attempting to capture an adult male snowy we believe is Erie, which has been photographed several times in southern Ontario. Erie’s transmitter is acting up, sending up random transmissions with no data, and we appreciate Nigel and his crew’s significant efforts to recover the unit and its data.

Merrimack Closes the Season
Baltimore: The Rest of the Story