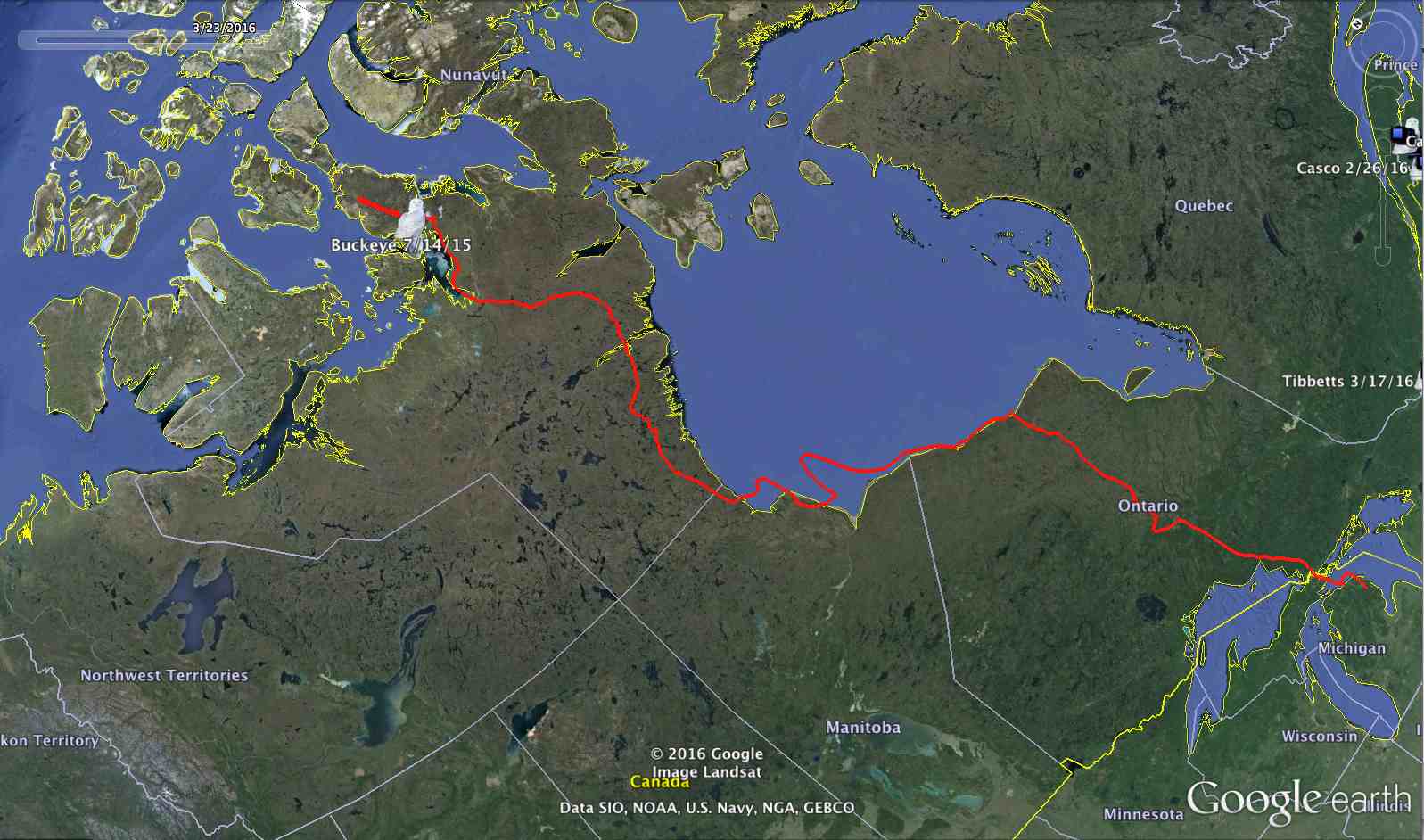 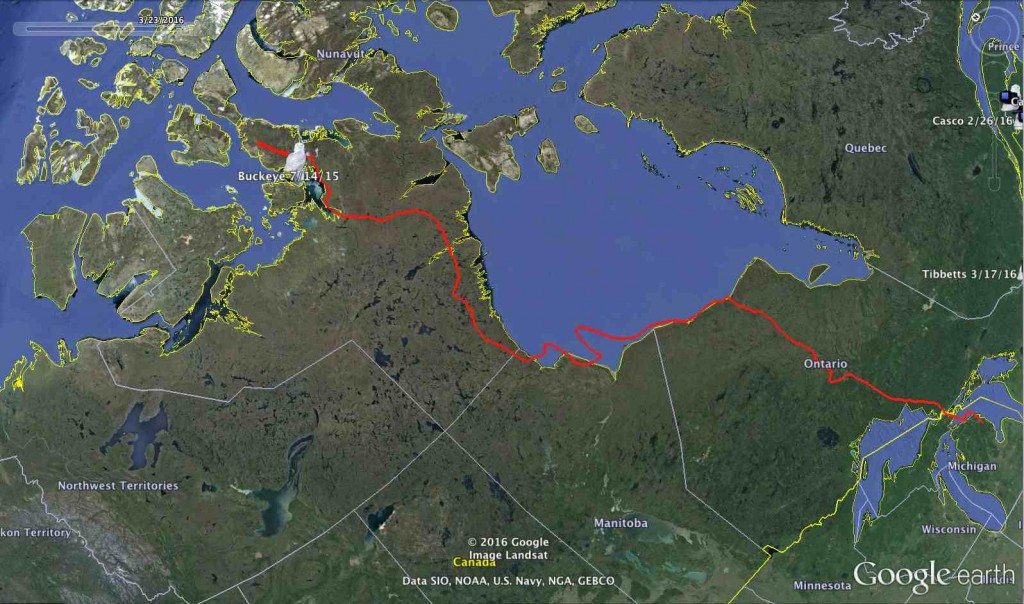 One of the most exciting developments this winter was the unexpected reappearance on Feb. 22 of Buckeye, our first Ohio snowy owl, tagged last winter after being relocated from the Detroit airport.

Her transmitter quickly uploaded a new configuration designed to maximize battery power and speed the download of her stored data — and that has worked spectacularly well. In the past week she’s sent us more than 7,000 GPS locations that trace her wanderings since she left the upper Midwest last April — and it was a doozy of a trip.

The last time we’d heard from Buckeye was April 15, 2015, when she was still in northern Michigan. From there, she rapidly moved north, skirting the eastern end of Lake Superior, then on to the south shore of Hudson Bay by May 11.

Buckeye then turned west and again north, going off the tip of Cape Churchill (famed for its polar bears) and following the coast of the bay about 100 km (65 miles) inland, then crossing northern Nunavut. She flew another 480 km (300 miles) or so north of the Arctic Circle, onto the Boothia Peninsula, a vast spit of land between the Beaufort Sea and the Gulf of Boothia in the central Canadian Arctic. 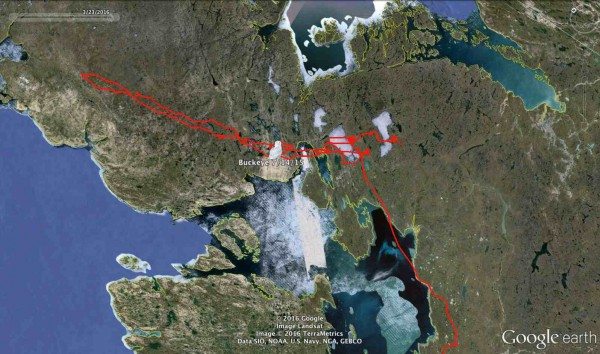 On June 21 — the summer solstice, appropriately enough — Buckeye reached her northernmost point, more than 3,380 km (2,100 miles) from where she’d spent the winter. That high-water mark also makes her the most northerly of all of Project SNOWstorm’s owls, although Braddock spent the summer of 2014 only about 300 km (185 miles) south of that point.

Having gone so far north, Buckeye almost immediately reversed direction and started a slow but steady retracing of her tracks. Through July and most of August, she moved in a fairly direct line southeast back down the peninsula, finally lingering along Lady Melville Lake near Cape Colville, where she was on Sept. 6.

After that, there are some major gaps in the return trip; Buckeye’s transmitter struggled more than, say, Baltimore’s did with the shortening days and low sun angle of the Arctic autumn. By Oct. 16 she’d moved far enough south to catch up with the fading sun, and for the next three days we have locations as she moved past Cape Churchill once more, speeding along at about 116 kph (72 mph) — one of the fastest speeds we’ve ever seen from a migrating snowy, which more typical travel at about 64 kph (40 mph). She may have had a good tail wind, or just been in a hurry. 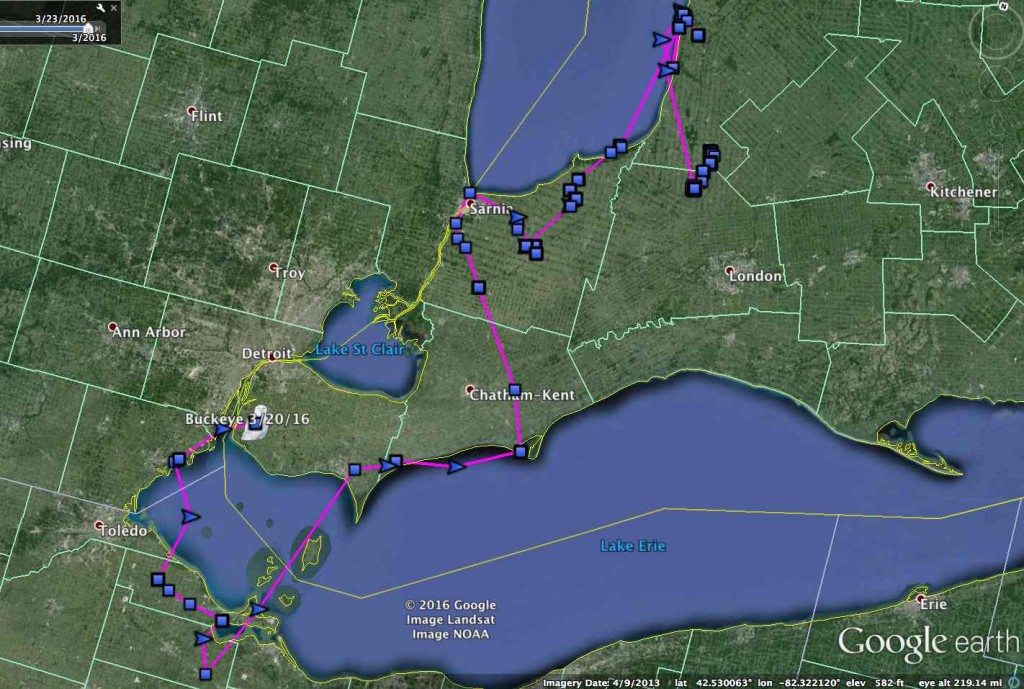 Then her transmitter fell into sleep mode again until March 7, when she was northeast of London, Ontario. Why that happened is a puzzle; unless something’s partially blocking the solar panel, it should have been receiving enough power for a recharge and normal operation over the winter. Whatever the reason, with the new configuration it’s steadily gaining voltage, and we’re going to work with our partners at CTT on another tweak to squeeze every amp from the battery.

Buckeye’s still on the move. In the past two weeks she moved down to Leamington, ON, near the famed birding hotspot of Point Pelee, then crossed the western end of Lake Erie through Pelee Island and the Bass Islands to the same part of northwestern Ohio where she was released last winter.

She didn’t linger. March 20 she had jumped the lake to the Michigan shore, then looped across the Detroit River to Amherstburg, ON, where she was at last report.

There’s a lot to share about our other owls, some of which are pushing hard for the north — but that will be another update, very soon.

The Pull of the Pole
Wampum is Back!