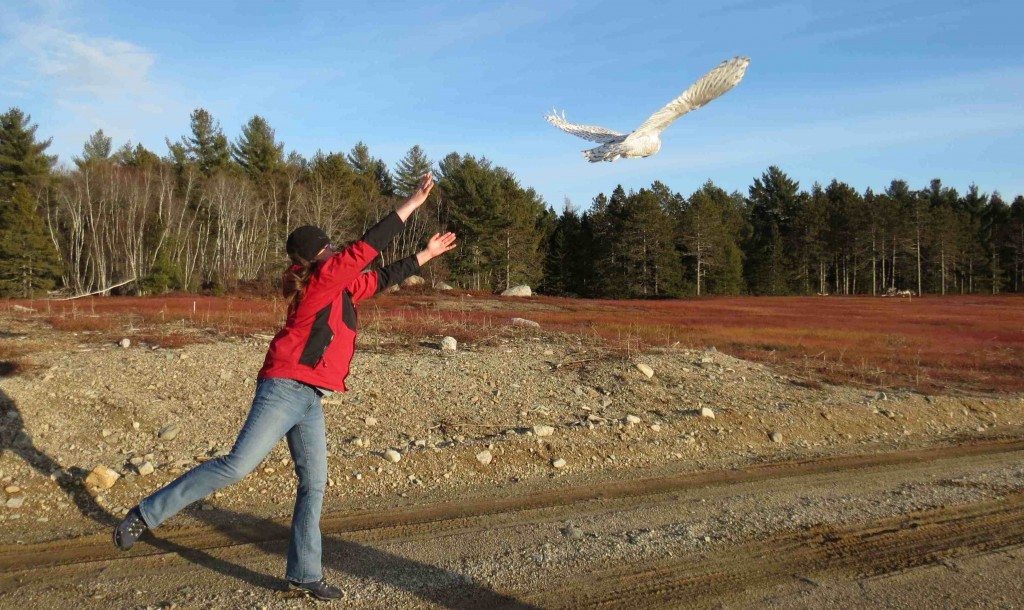 With a toss, Lauren Gilpatrick from the Biodiversity Research Institute releases Casco in Down East Maine. (BRI)

Earlier this winter, Project SNOWstorm worked with its partners at the Biodiversity Research Institute and USDA’s Maine Wildlife Services to tag our first snowy owl in Maine, a female named Brunswick.

It’s taken a bit more than a month, but last week we tagged our second Pine Tree State snowy, another female that we’ve nicknamed Casco. 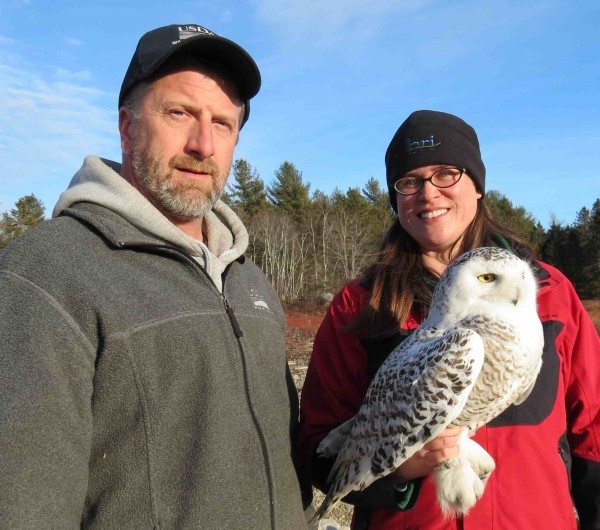 Matt Ewing from USDA Wildlife Services and Lauren Gilpatrick from BRI with Casco, just before her release. (©BRI)

After a rush of owls in December, snowies became scarce at Maine airports in the first weeks of January –a good thing, because the owls are a hazard to planes and vice versa. But a few snowstorms this month changed the dynamics, and a number of owls appeared in recent weeks at the Portland International Jetport, which asked Wildlife Services to trap and relocate the birds before they were struck by planes.

On Feb. 22, Wildlife Services arrived at the jetport late in the day and found four snowy owls, two of them within 50 yards of active runways – a real safety hazard. Setting up bownets, they soon had two snowies in the mix, alternating their attention between the traps and each other — snowy owls can be fiercely territorial, especially when food’s an issue. 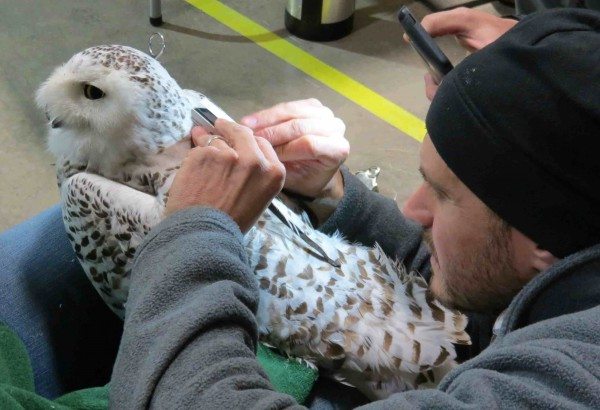 Chris DeSorbo from BRI fits Casco with her harness — a careful and meticulous process. (©BRI)

By this point it was dark, so Wildlife Services moved one of the traps closer to the first owl they’d spotted, and used their truck headlights to illuminate the rig — a trick that often works well with snowies. And it did this time, too. After half an hour, the owl flew to the roof of a nearby building, peering intently at the lure, then fifteen minutes later dove down and was netted.

The next morning (after eating three meadow voles overnight) the owl was banded and processed. We’re calling her Casco, for Casco Bay, where she was caught. Based on her wing molt, Casco’s at least three years old, and weighed a very healthy 2,231g. Banded and tagged by the BRI crew, she was then transported Down East, as they say in Maine.

Lauren Gilpatrick from BRI released Casco in a huge complex of blueberry barrens in Washington County, about 150 miles (242 km) northeast of the airport. This area is one we’d discussed with Wildlife Services earlier in the winter as a potential release site, away from other airports and with a lot of open land. It’s big, empty country. The unorganized territory of North Washington, the portion where Casco was released, covers almost 1,000 square miles (about 2,600 sq. km) and has fewer than 500 residents. 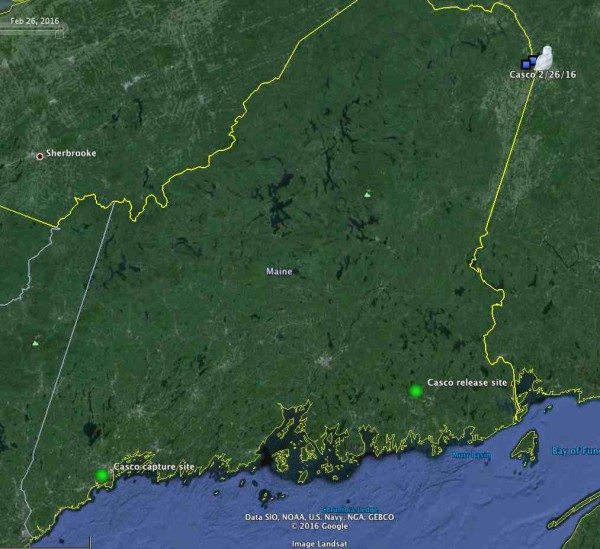 But that wasn’t empty enough for her, apparently. Casco immediately moved north, crossing about 150 miles (242 km) of boreal forest in two days. Thursday evening she was just north of Caribou, Maine, and the former Loring Air Force Base, and only a few miles from the New Brunswick border.

Where will she go from here? Hopefully, not the old air base — it’s still an active public airport. There’s a lot of farmland south of Caribou and on the Canadian side of the line — and in fact, by Friday she was across the border, near the town of Saint André, New Brunswick. If she continues north, though, she’ll hit mostly forest until she reaches the Gulf of St. Lawrence and the base of the Gaspé Peninsula.

We’ll have Casco’s map live in a day or two — and an update tomorrow on the rest of our tagged owls.

P.S. If you haven’t already done so, check out the burlybird.com snowy owl stickers that the multi-talented Lauren G. made for us, which you can get through our Indiegogo campaign!

Owls, West to East and in Between
Chaumont, and an Owl Called Hardscrabble