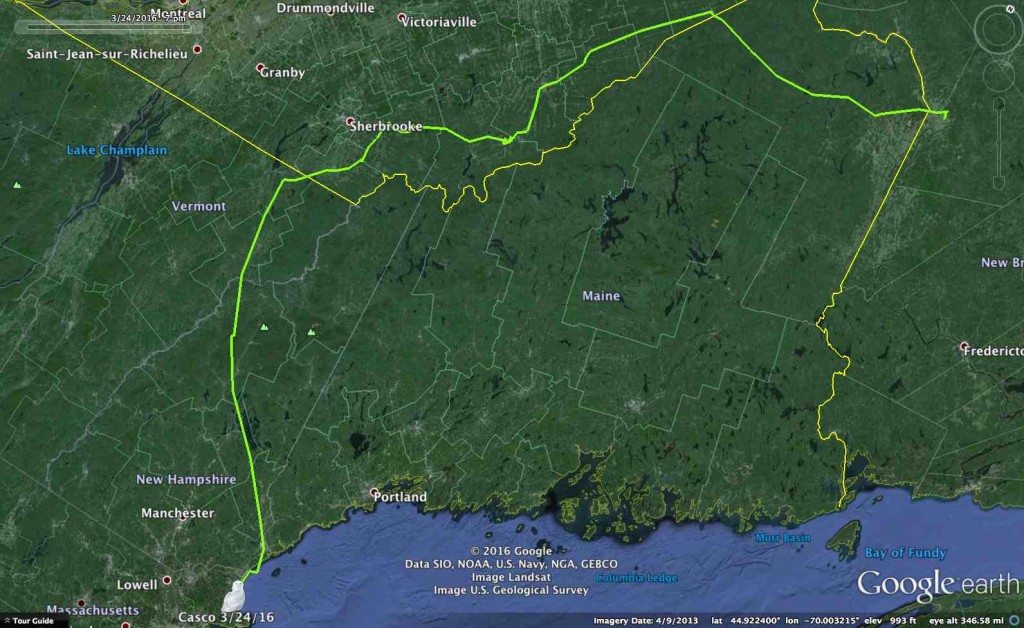 Casco’s round-abount route back to the coast — a grand tour that crossed six states and provinces in the past three weeks. (Note: North is to the upper right.) (©Project SNOWstorm and Google Earth)

Casco — our second Maine owl, tagged in late February — pulled a bit of a disappearing act earlier this month.

After being captured at the Portland, Maine, airport, she was released Down East, in a complex of immense blueberry barrens in Washington County, ME, close to the Canadian border. Casco quickly moved a couple hundred miles north, crossing into New Brunswick and Quebec near the Gaspé Peninsula around the first of March — then vanished.

Well, she’s back — and an unexpected track it was, when her backlogged data downloaded. Instead of going north, like many of our snowy owls this past week or two, Casco took a loopy route far to the south, crossing six states and provinces in the process.

The night of March 4-5 she left Grand Falls, NB, right on the Maine border, and flew about 100 miles (160 km) due west across the remote and largely uninhabited timberlands of northern Maine, the wild St. John and Allagash river drainages. Almost as soon as she crossed the border into Quebec, she fetched up at a large timber processing facility near Saint-Pamphile — probably the first gap in the endless forest that she’d seen.

From there, Casco’s route turned southwest, and roughly paralleled the western Maine/Quebec border, remaining on the Canadian side. She spent about 10 days, from March 6-16, near Saint-Ludger, QC, an area of farmland along the Riviere de la Chaudier in what is otherwise a heavily forested region.

Just east of Sherbrook, QC, she made a sharp turn south on March 18, and dropped into northern Vermont — the first SNOWstorm owl to make an appearance in the Green Mountain State. She overflew St. Johnsbury in the wee hours before dawn March 19, clipping along at 50 mph (80.5 kph).

Crossing into New Hampshire, Casco rested for a time well above treeline on Mt. Moosilauke, a 4,802-foot (1,463m) peak at the southern end of the White Mountains; its alpine tundra must have looked a little like home. But she didn’t linger — she flew another 93 miles (150 km) southeast, right over the middle of Portsmouth, NH, and out to sea.

Only when she got a few miles offshore did Casco seem to think better of it, swinging back to land and continuing down the coast, finally ending up at Parker River National Wildlife Refuge in northern Massachusetts. In all, she’d flown more than 550 miles (885 km) since her last check-in. 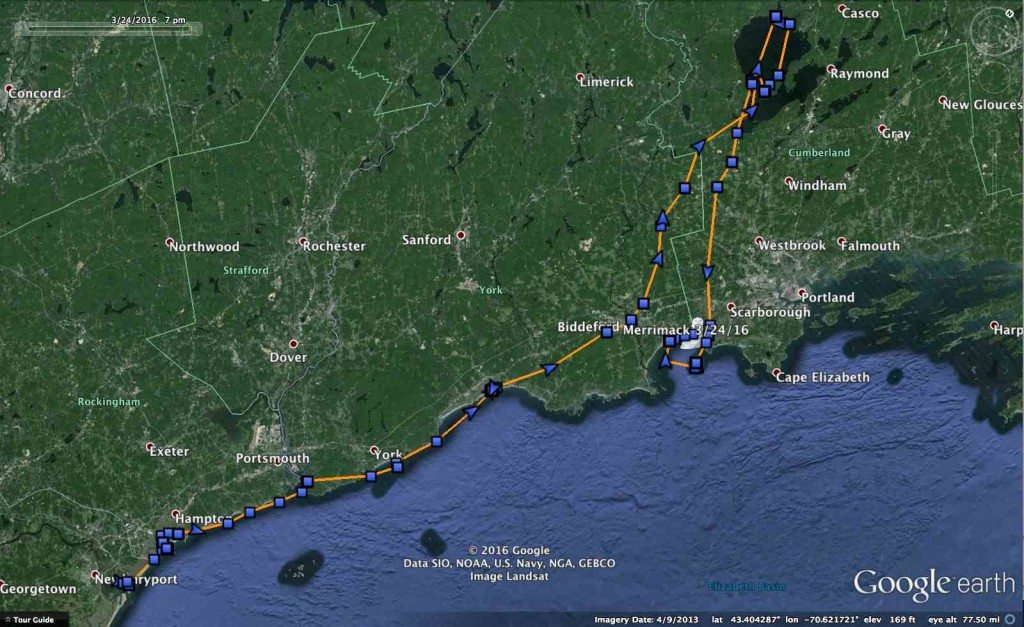 Deciding that the deep forests around Sebago Lake didn’t suit her, Merrimack flew back to the coast last week. (Note, north is to the upper right.) (©Project SNOWstorm and Google Earth)

Ironically, just as Casco was flying over northern Massachusetts, where our tagged bird Merrimack spent the past few weeks, Merrimack herself was hurrying north — if Casco had been a few hours earlier they would have passed each other near Rye, NH.

Merrimack left her previous haunts before daybreak March 18, and flew up the coast to near Wells Beach, Maine — which is where Brunswick (currently in the Isle of Shoals) spent the majority of the winter. (Yes, I know this is getting confusing.) At Kennebunk, ME, Merrimack veered inland, and by daybreak March 20 was trying to find suitable habitat at Sebago Lake.

She spent a couple of days mostly roosting on some of the islands in this large, unusually deep lake in the Maine woods, but the night of March 21-22 she moved back to the coast, winding up at Scarborough Marsh and Old Orchard Beach — two justly famous birding sites in southern Maine, known for their shorebirds, waterfowl and two species of sparrows (Nelson’s and saltmarsh) rarely found in one spot.

As for the rest of the crew, a number of owls didn’t check in, including two that have had us a little worried, Wampum and Salisbury — though both had low batteries at their last check and may simply need some sunshine.

Tibbetts remained along the Ottawa River, east of Gloucester in extreme southeastern Ontario. He’s been there since March 13, though he wandered 47 km (25 miles) to the east before looping back again. 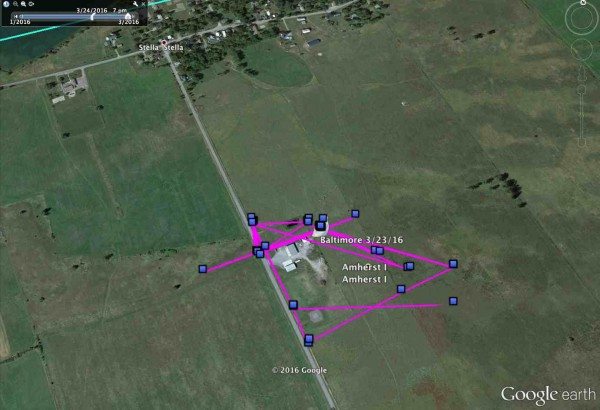 As we’ve noted before (and as SNOWstorm co-founder Norman Smith found years ago with his pioneering satellite telemetry work) the Ottawa/St. Lawrence valley appears to be a significant staging ground for snowy owls in both autumn and spring.

Brunswick, as noted, remains on the Isle of Shoals off the New Hampshire/Maine coast. Baltimore — probably the most reliably immobile owl we’ve had this winter — barely budged from a tiny activity range of just 9 hectares (22 acres), centered on the Loyalist Township Emergency Services buildings near Stella on Amherst Island.