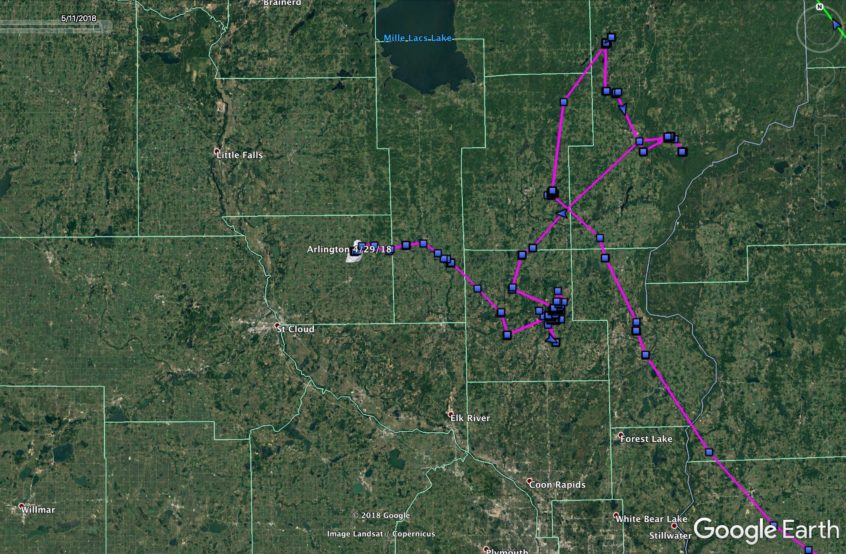 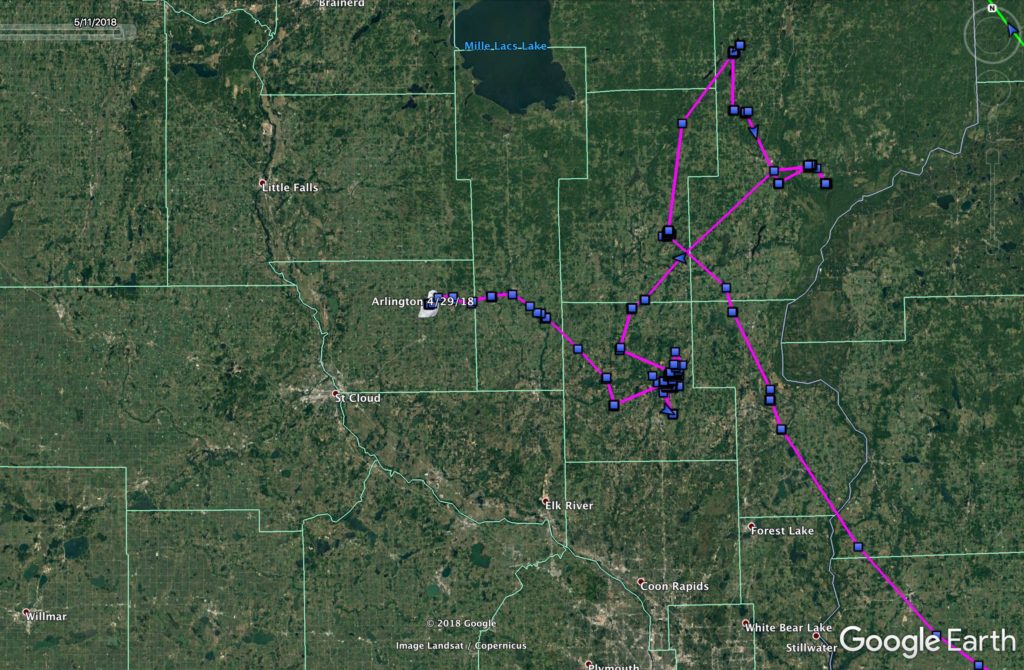 Arlington’s movements through April 29, when he was apparently struck by a vehicle in Minnesota. (©Project SNOWstorm and Google Earth)

Sorry for the silence the past two weeks — as we’ve said before, all of us at Project SNOWstorm do this in our spare time, and this is a busy season for wildlife folks. I just got back from a 10-day writing and research trip to China focusing on shorebirds, while webmaster Drew Weber was with the Cornell Lab’s Sapsuckers birding team in Colombia for the Global Big Day. SNOWstorm co-founder Dave Brinker has been chasing goshawks in the Allegheny National Forest of northwestern Pennsylvania — just to give a couple of examples.

But there’s been a lot going on, so let’s bring everyone up to speed. Unfortunately, the biggest news is also the saddest. Arlington, who was tagged Jan. 4 at Madison Audubon’s Goose Pond Preserve near Arlington, Wisconsin, was found dead along a roadside in Benton County, Minnesota, on April 29. Although we’ll conduct a necropsy to be sure, it appears he was killed by a vehicle collision — our third such loss this winter. A passerby saw a snowy owl sitting along a country road, not moving, and when they returned half an hour later, the owl — Arlington — was lying dead.

We’re deeply grateful to Carroll Henderson and the other folks at Minnesota DNR, who recovered Arlington, for reaching out to us immediately and making arrangements to have him and his transmitter shipped to us — just another example of the terrific cooperation we’ve enjoyed over the years from state, provincial and national wildlife agencies.  And we’d like to again extend our thanks to Madison Audubon for sponsoring Arlington’s transmitter — this is a hard loss for them as well as us, but Arlington’s movement data is and will remain a valuable legacy.

As for the rest of the avian crew, quite a few of this winter’s cadre of owls seem to have moved out of regular cell range, and are likely off the grid for the rest of the season. For example, we haven’t heard from our prairie owls, Pettibone and Ashtabula, since early and late April, respectively. Hardscrabble last checked in April 20 from Georgian Bay, while Stella, Emerald, Hilton and Wells were moving north through southern Quebec late last month, at the edge of the main cell network. Chickatawbut last transmitted April 20 from her winter territory along the St. Lawrence, but she could easily pass through and beyond the sparse cell network in southern Quebec between one transmission cycle and the next.

Logan, not far away along the river near Baie-Saint-Paul, QC, was moving north into the forest May 1, the last day we heard from her. Brunswick, over by Prince Edward Island, has also been silent since April 26 and may also be out of range.

Island Beach was in southern Quebec May 7, on the Taureau Reservoir near the town of Saint-Michel-des-Saints. Lenape, meanwhile, was just a bit east of him on May 3, north of Lac-aux-Sables, Quebec. May 1 is the last time we’ve heard from Sinepuxent, who was on Grenadier Island, New York, at the eastern end of Lake Ontario. 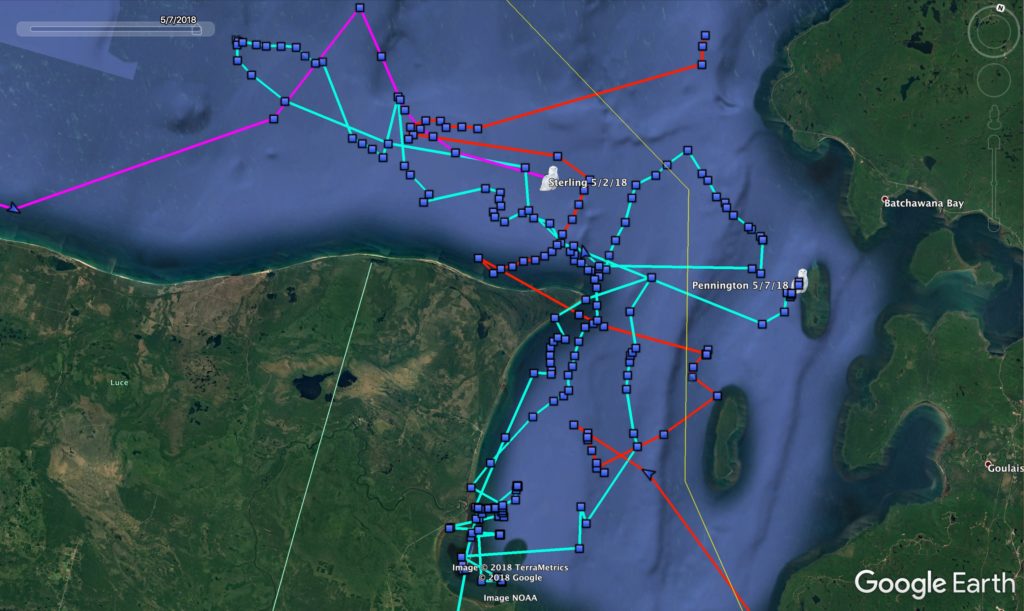 The western Great Lakes region has been interesting. There’s very little ice left on Lake Superior, just a couple hundred square miles of broken floes on the eastern reaches of Whitefish Bay by this weekend, but three of our tagged owls were crisscrossing each other’s paths there in recent weeks when the ice cover was a bit more extensive. Sterling, Pennington and Pickford all moved around Whitefish Point, with Sterling last heard from May 3 and Pennington on May 7, while Pickford had moved onto the Ontario shore the evening of May 11. Given the extremely limited cell coverage on the north shore, these may be the last times we hear from these owls this spring. 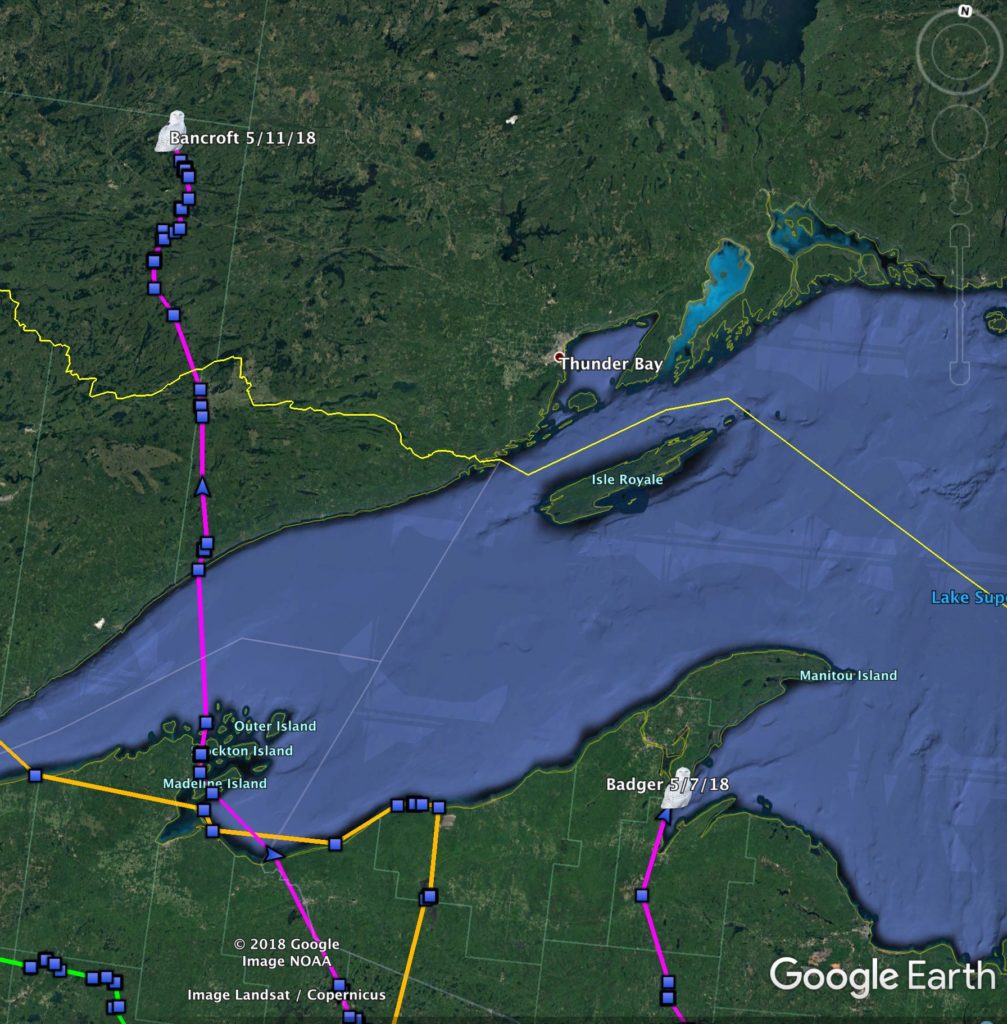 Badger and Bancroft have been looping around the western end of Lake Superior in the past week. (©Project SNOWstorm and Google Earth)

After holding tight to her farm near Freedom, WI, all winter, Badger took off May 5 and flew up to Lake Superior, and two days later had reached the Keweenaw Peninsula, the “mouth” of Lake Superior’s headlike shape. At the same time, Bancroft was crossing the western nose of Lake Superior from the Apostle Islands to the northern shore, a 36-mile (58-km) overwater flight, and by May 11 was northeast of Atikokan, Ontario. 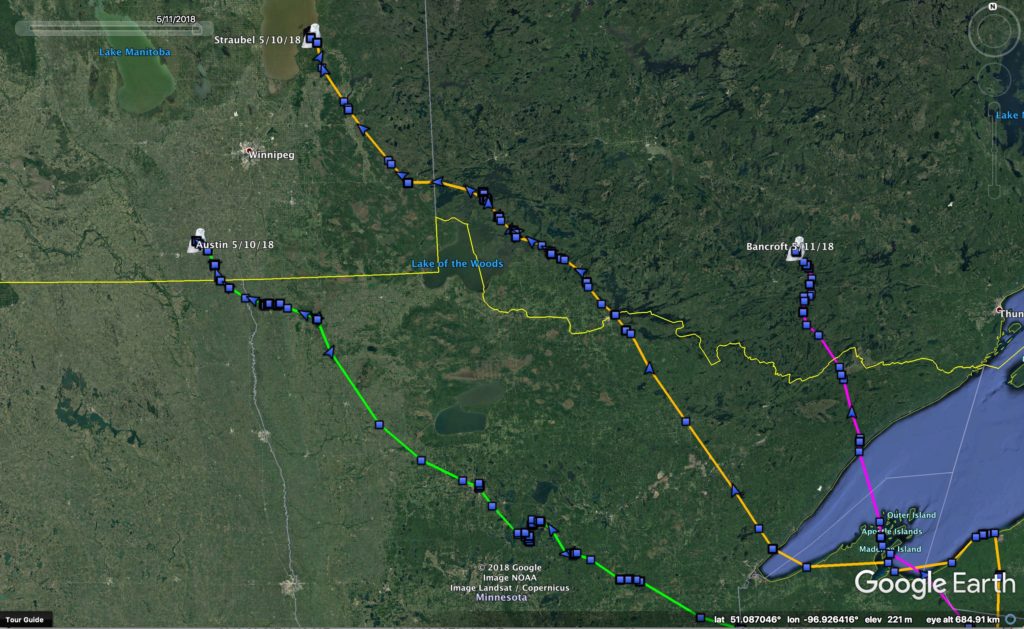 Straubel and Austin both aimed northwest from their wintering grounds in Wisconsin, and were in southern Manitoba at last report. (©Project SNOWstorm and Google Earth)

Straubel and Austin had both moved well to the northwest and crossed into Manitoba. On May 10 Straubel was at the southern tip of Lake Winnipeg, while the same evening Austin was just north of the North Dakota border near the town of Altona, Manitoba.