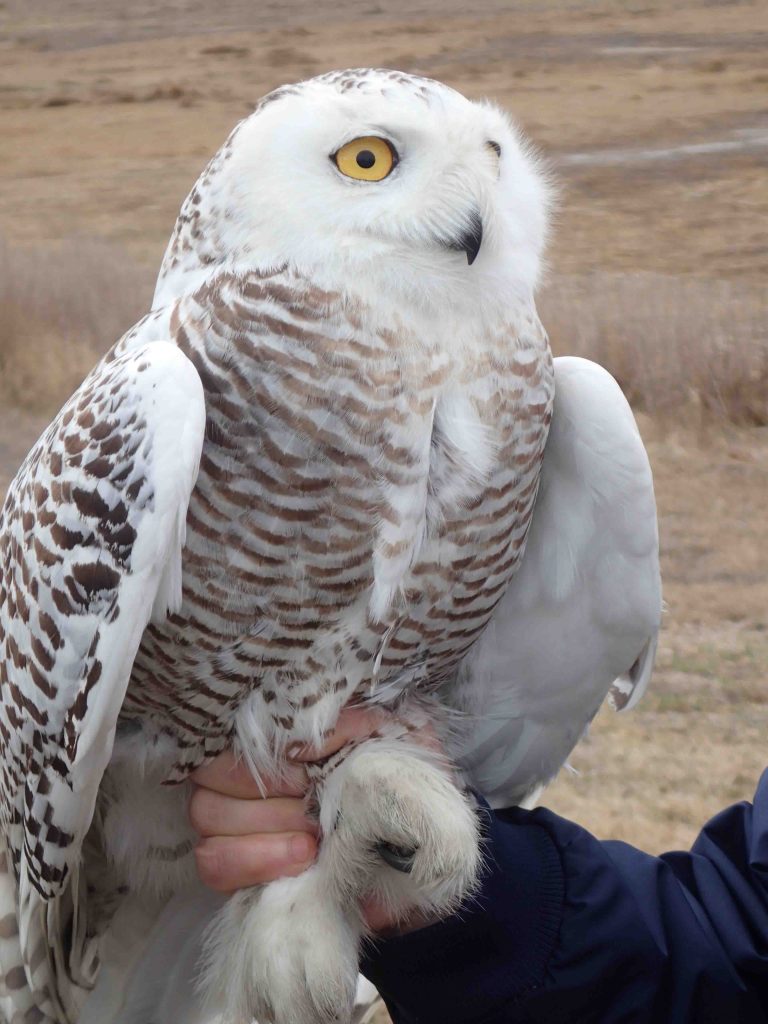 Chickatawbut, captured last March at Logan Airport in Boston and relocated to northern Massachusetts, is one of two returning snowies this winter. (©Scott Weidensaul)

Well, it’s been a busy week around here, an no mistake. We launched our 2017-18 research season, which is going gangbusters (thank you to everyone who has helped so far). We got Hilton, our first new owl of the season tagged, and we have been chasing snowies in a number of places, as we’ve shared with you all. We’ll have some very exciting news to share on that front soon, but the good news today is that two of our 2016-17 winter owls have reappeared — the first returnees of this season.

Last week we got a transmission from Chickatawbut, a female that was banded in early March 2017 by Norman Smith, who trapped her at Logan Airport in Boston. (She was tagged during the International Snowy Owl Working Group meeting at Chickatawbut Hill in the Blue Hills Reserve, with quite an illustrious crowd of snowy owl experts from Russia, Europe and North America in attendance.)

Chickatawbut was last detected in early May, heading north through southern Quebec. When she checked in last week she was along the south shore of the Gulf of St. Lawrence, near the small town of Racul-à-Rankin, Quebec, about 150 km (90 miles) northeast of Quebec City.

Her battery is just regaining charge after going dormant in the subarctic darkness, so we only got a bit of her stored, northbound data from last May, as well as a point at which her unit shut down for lack of sunlight on Oct. 28, when she was still far up on the Ungava Peninsula in Quebec. As her transmitter soaks up sunlight (now that she’s down where the sun actually rises in winter) we should get the rest of her backlogged data in a series of transmissions. As we do, we’ll continue to update her map so you can follow along. 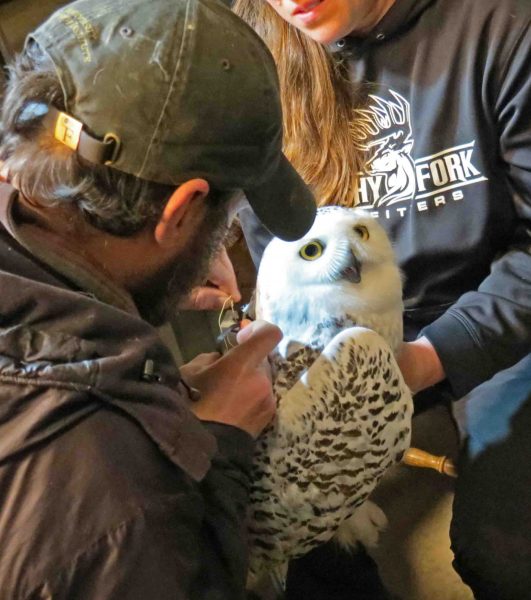 The crew from the Biodiversity Research Institute in Maine fits Wells with a transmitter last January. (©BRI)

We also heard Sunday night from Wells, an adult female trapped last January by USDA Wildlife Services at the Portland, ME, Jetport, tagged by our colleagues at BRI, and released at Rachel Carson NWR in southern Maine. She was last detected in late April, also heading north through Quebec.

Wells’ transmitter had so little power it simply sent an “I’m alive” message but no location or backlogged data. Mike Lanzone at CTT (whose transmitters we use) was able to look at the transmission metadata and see that she connected via a Telus cell tower, which means she’s somewhere in Canada — but we don’t know where. Keep your fingers crossed that the sun is shining, wherever she is, so her next transmission provides more data.

Because there was a major breeding event in the Ungava this past summer, it will be especially interesting to see if these two females were in that region — and if so, if their data show indications of nesting. It is thought snowies take at least three or four years to reach maturity, but no one really knows. If so, Wells might have nested, but not Chickatawbut, who is still a relative youngster — but there’s little hard data on age at first breeding in this species, especially in females. Their tracking data may give us some insights on this question.

For now, though, we need to be patient. We go through this every year, as owls come south from the Arctic and subarctic where the sun barely rises, if at all. It takes a bit for their batteries to recharge, but the data should all be waiting for us once the units are fully powered.

Sterling and Hilton Head West
On the Shoulders of Giants: Tom McDonald

2 Comments on “Chickatawbut and Wells Come Back”