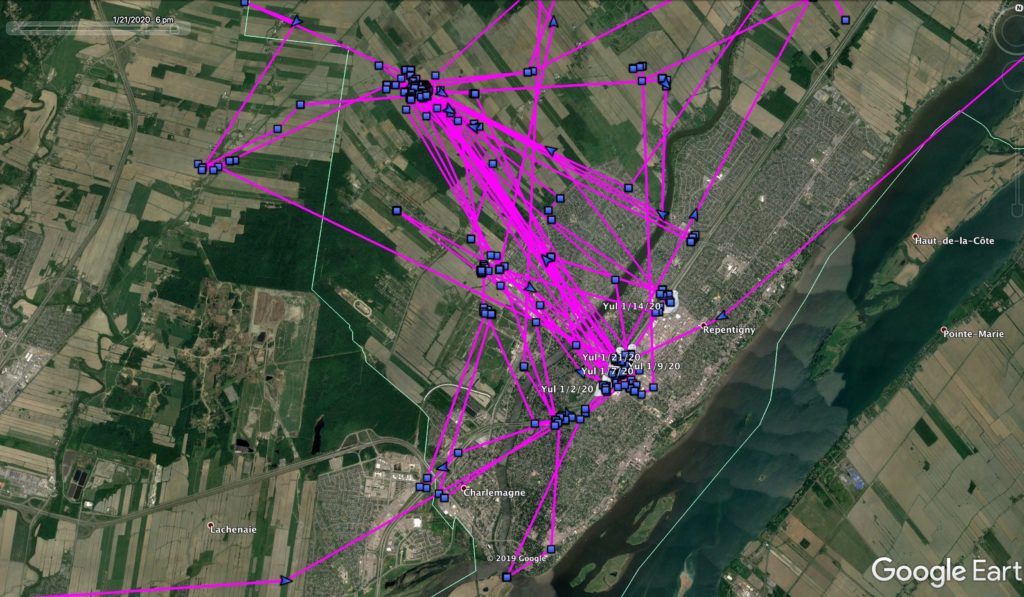 While the big news lately has been Wolverine losing his transmitter and Buckeye getting hers, our other tagged owls have been keeping us busy, watching their movements, worrying abouy them and trying — as we always do — the better understand the ecology of these birds through their tracking data. 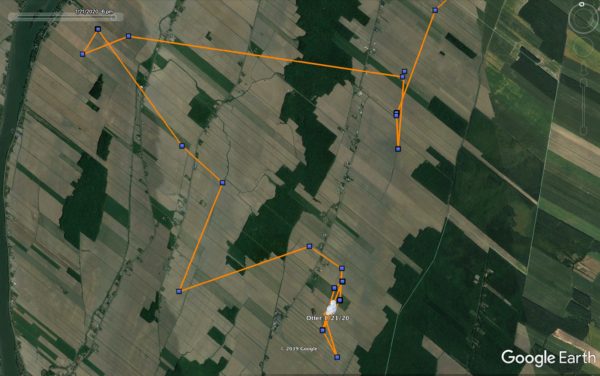 Of our two owls in southern Québec, only Otter is behaving himself, staying safely in the farmland of the south shore of the St. Lawrence, northeast of Montréal. After spending a couple of weeks near the village of Saint-Zéphirin-de-Courval, on Jan. 17 he moved briefly out onto the river ice, then flew 60 km (38 miles) southwest, and is 14 km (8 miles) northwest of Saint-Hyacinthe, QC, staying away from towns and busy roads.

That is certainly not the case with our Québec snowy. Yul, who was moved twice from the Montréal airport, is only 25 km (16 miles) west of Otter, but in a totally different world. While she’s at least steering clear of the airfield, she’s commuting about 6 km (4 miles) every evening from a quiet daytime roost site in the countryside to the middle of Repentigny, a major suburb of Montréal, where she hunts along a huge, busy interchange on Autoroute 40. 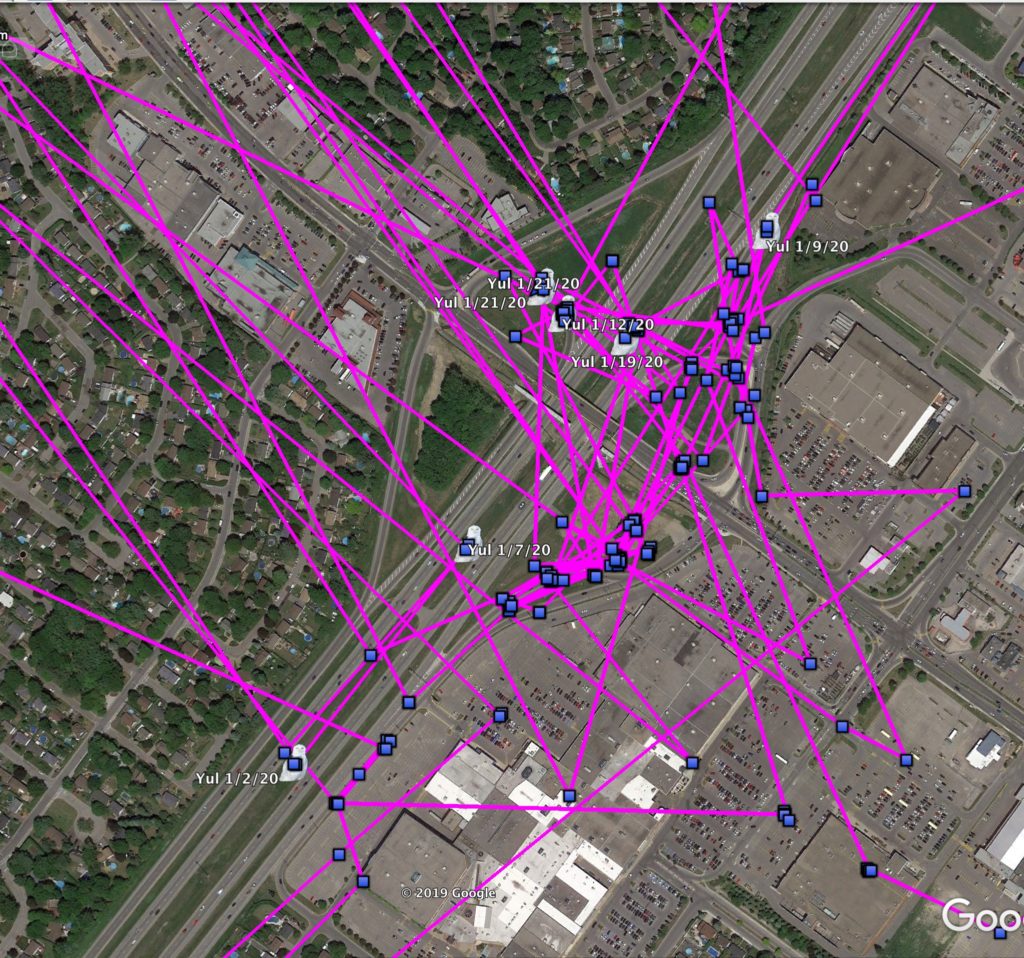 Each time her transmitter connects, at about 7 p.m. EST on Tuesdays, Thursdays and Sundays, we see the same thing — Yul perched on one of the high street lamps overlooking the highway, doubtless hunting small mammals on the highway verge. With the amount of traffic the road carries, it’s a dicey place to make a living, but snowies don’t mind most things human, and such habitats are often rich in rodents (as the number of roadside red-tailed hawks often attests). But while raptors that like redtails that grow up around humans and vehicles learn to be wary, snowy owls have little such fear, as the large number of collision deaths each winter shows. 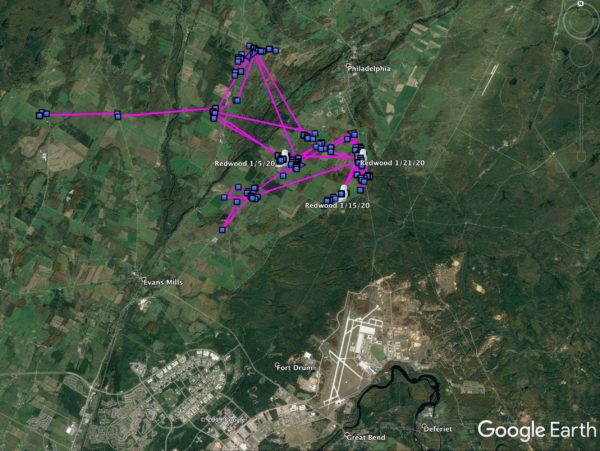 We hope the buffer of forest keeps Redwood from wandering onto the Fort Drum airfield. (©Project SNOWstorm and Google Earth)

Down in northern New York, Redwood is living a quieter life near the town of Philadelphia, Jefferson County, just east of Lake Ontario. The past week or two he’s been hunting farmland right on the border of Fort Drum, where there is a large and busy military airfield. Fortunately, the installation is bounded by a couple-miles-wide band of thick forest, which may prevent Redwood from pushing south to the airfield. 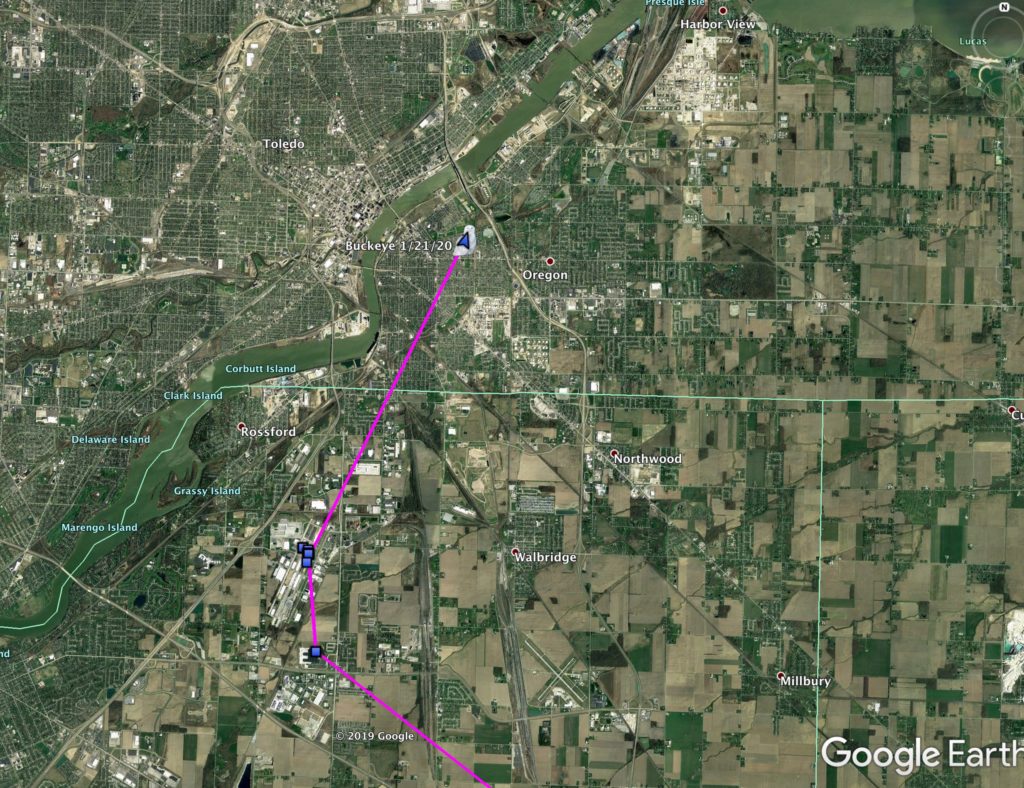 Buckeye, back on the grid with her new transmitter, seems determined to get back up to Michigan after being relocated to Ohio from the Detroit airport. After spending a couple of days around a truck stop off I-80 near Lemoyne, OH, in Wood County, yesterday she flew north to Perrysburg, just south of Toledo. There, she spent the day on the rooftops of what is now a big industrial park (and campus of Owens Community College), but had been the massive Rossford Army Depot during World War II, storing ammunition and military vehicles for the war effort.

At dusk last night she’d taken off and when her transmitter checked in, she was flying northeast at 35 mph (56 kph) over Oregon, OH, heading for Lake St. Clair. We can only hope she finds some tasty waterfowl along the lake (which is still mostly open water) or abundant rodents in the farmland of Monroe County, MI, that will short-stop her before she gets back to Detroit.

Out on the prairies, it’s been several weeks since we’ve heard from Pearl, who last checked in in eastern South Dakota. Her transmitter has shown very little solar recharge — odd, compared with the other Dakota owls, Medina and Coteau, whose voltage is topping off nicely. While it may be a mechanical issue, it’s more likely a reflection of Pearl’s behavior. Some owls habitually preen their back feathers up and over the solar panel, while others act like little sunflowers, roosting face to the sun all day so their backs are always in shade. A few owls make a habit of roosting against or beneath objects like haybales, farm machinery or snow cornices — and if Pearl does any or all of those things, it would explain why her battery was struggling in this, the darkest month of the year.

Up in North Dakota, Medina has been sitting tight in western Kidder County, using a roughly 9-square-mile (14.5-sq.-km) area just north of I-90 near Steele — but unlike Yul, she’s staying well clear of the highway. 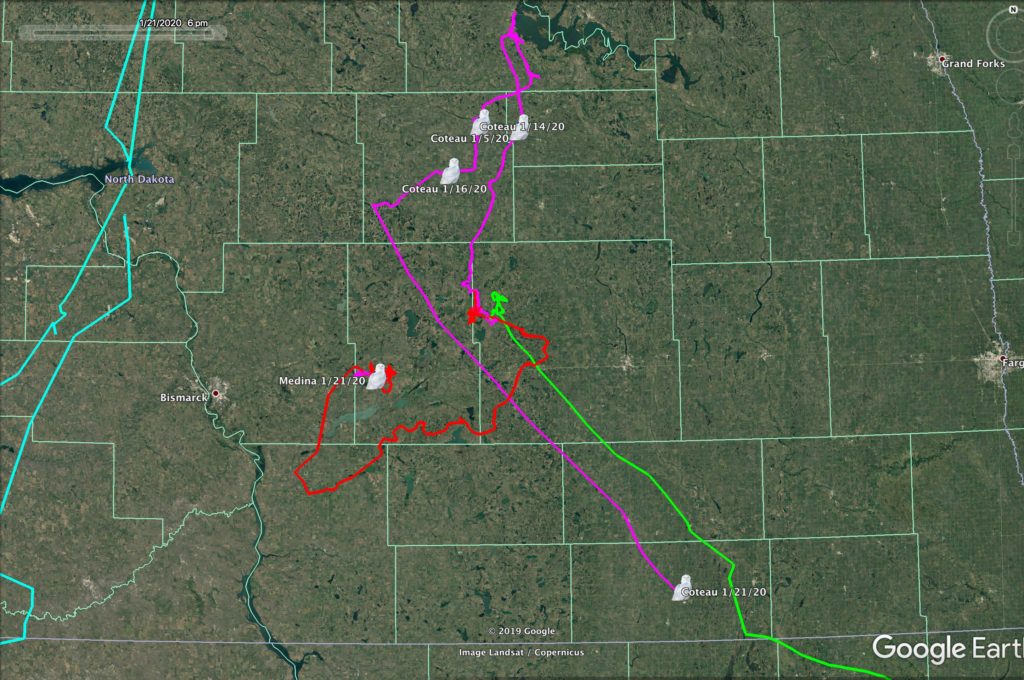 Coteau (purple) has been on the move a lot lately, unlike Medina (red), who has been largely settled since late December. The green track is Pearl, from early December, while blue is Stella from early November. (©Project SNOWstorm and Google Earth)

Coteau, on the other hand, has been all over the place the past two weeks. In early January she flew 65 miles (105 km) north from Stutsman County to Devils Lake, the largest natural body of water in North Dakota and both a popular fishing spot and an Audubon-designated Important Bird Area for its large populations of waterfowl and waterbirds. After spending a few days around the town of Minnewauken, Coteau swapped directions and headed south, and over the past week has flown more than 180 miles (294 km) in a big dogleg, bringing her last evening to the middle of Dickey County, ND, just a few miles from the South Dakota line.

Why some owls move and some don’t is always a puzzle, one that biologist Matt Solensky — who tagged all of these Dakota owls — has been thinking about. “I’m sure there is always more than just one reason for a bird to pick up and move after it’s been holding tight to a specific area for a few weeks, but I think snow depth might be having an influence this year,” he emailed a while back.

“Looking at them individually, I think Medina over by Steele, ND, has been able to stay put because she is just on the western edge of the most recent snowfall that we got. I haven’t been out there, but several friends traveling to Bismarck have commented on the snow line just past Steele. The storm we got just before New Year’s dumped around 20 inches [50 cm] in the Jamestown area and east to Fargo. Bismarck really didn’t get anything out of that storm. The same storm dumped quite a bit down in South Dakota, particularly in NE SD where Pearl has been,” he said.

A map of current snow depth provides some clues for owl movements in the Plains. (NOAA-NOHRSC)

“In addition to deep snow, we had a brief warm up last weekend [Jan. 4-5] that put a crust on top of the snow, which I presume makes it more difficult for owls to get to prey. Coteau has started a move from the Woodworth area which has a lot of snow on the ground north up towards Devil’s Lake where there is much less snow.” 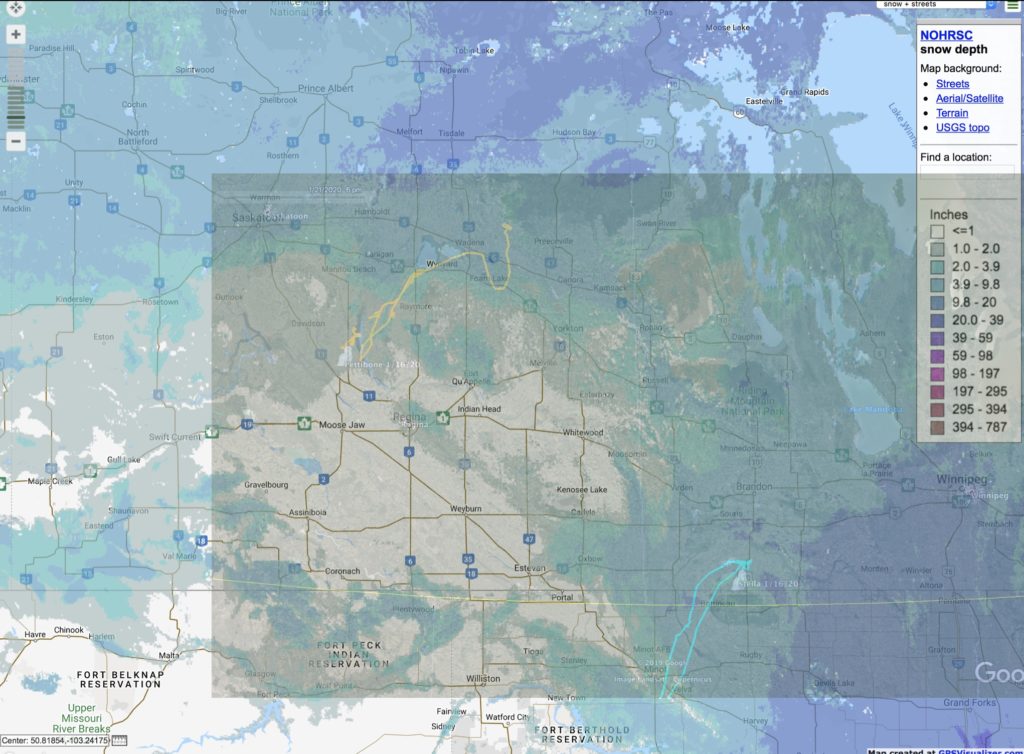 What about our two returnee owls on the Canadian prairies — how are Pettibone and Stella faring with snow this winter? Pretty well, judging by the snow depth data from the National Operational Hydrologic Remote Sensing Center (NOHRSC), which provides coverage for Canada as well as the U.S. Stella, who remains just north of the Turtle Mountain plateau on the Manitoba/North Dakota border, is in an area with 10-25 cm [4-10 in.] of snow cover. Meanwhile Pettibone, up in southcentral Saskatchewan, moved south a few weeks ago into a part of the province with almost no snow cover at all. (By the way, you can find a handy interactive map of current snow depth, designed for hikers and using NOHRSC data, at this website.)

Dorval, A Feathered Boomerang
Where to Begin? How About With Buckeye 2.0?