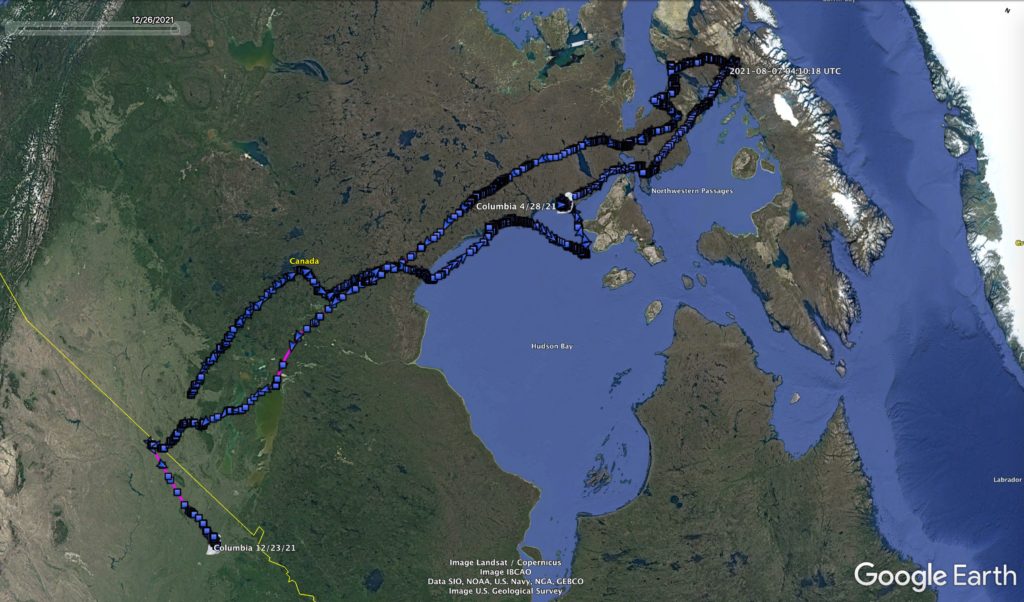 While we’re excited about our two new Québec owls, Nicolet and Odanak, we’re also keeping a close eye on our returnees from past winters, especially two in the upper Midwest, Columbia and Fond du Lac.

Columbia, you may recall, returned Nov. 25 and uploaded part of her migration data from last spring, then went dark while her battery recharged. Two days before Christmas she transmitted another 9,400 GPS points, bringing her travel data up to date, and we now know that she nested last summer in northern Baffin Island, in the eastern Canadian Arctic.

She lingered there through early October, then began meandering her way south, largely retracing her spring movement north, down the Melville Peninsula in Nunavut and moving well inland from the western shore of Hudson Bay through central Manitoba and into southeastern Saskatchewan by the beginning of December. From there, Columbia hooked a left, flying southeast across northern North Dakota by Devil’s Lake, just past Grand Forks and into western Minnesota. On Dec. 23 she was just north of Crookston, MN. 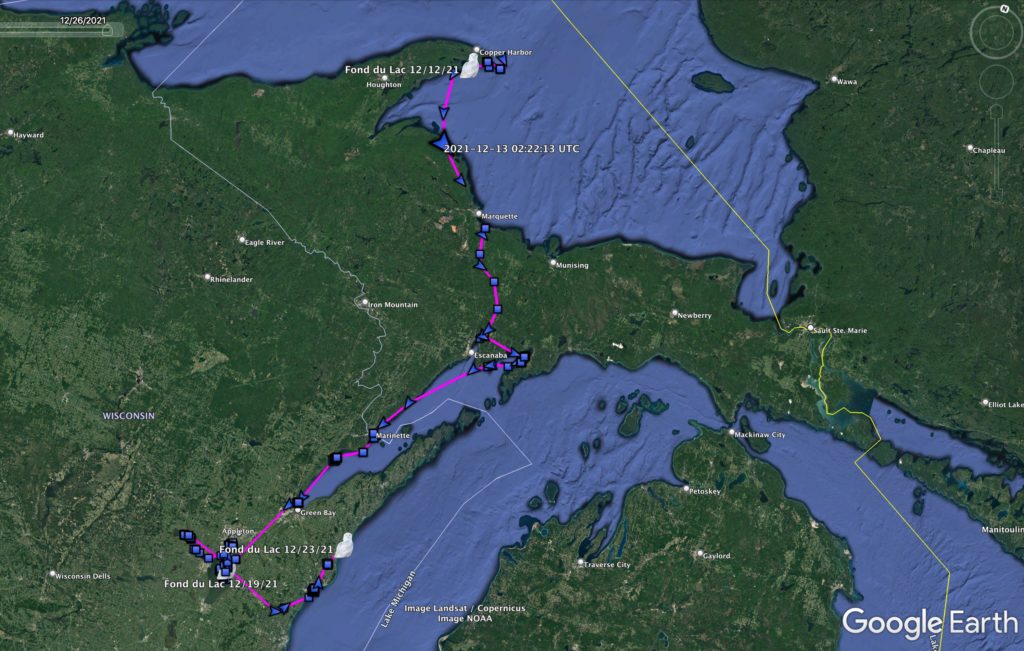 The last time we talked about Fond du Lac (FDL), she had just flown the width of Lake Superior and made landfall on Manitou Island, on the Keweenaw Peninsula of Michigan’s U.P. on Dec. 12. From there she crossed the Upper Peninsula, then moved down along Green Bay to Lake Winnebago in eastern Wisconsin, just north of her namesake town of Fond du Lac. 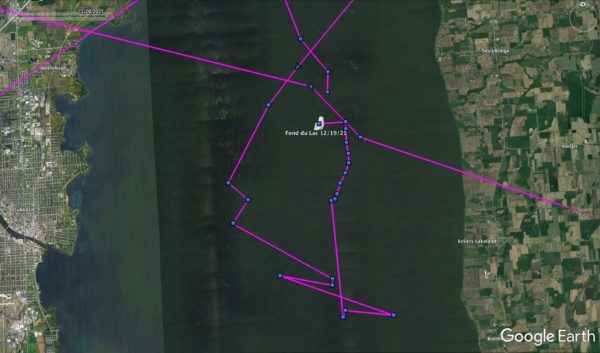 Fond du Lac did a little ice riding on a drifting floe on Lake Winnebago for about five hours. (©Project SNOWstorm and Google Earth)

At the moment, there is virtually no ice cover on the Great Lakes (well, 1.4 percent according to NOAA) but there were ice floes on Winnebago, and Fond du Lac found one, as evidenced by the very distinctive “ice riding” pattern in her data, showing evenly spaced half-hourly locations as the ice FDL was perching on drifted to the north on Dec. 19. She got restless and moved east to the mouth of the Manitowoc River on Lake Michigan on Dec. 22, and the next evening she was just south of the town of Kewaunee. (SNOWstorm supporters with a long memory may recall an owl by that name, tagged near Kewaunee in 2014.)

It’s been a while since we’ve heard anything from our other returned owls — Wells in the St. Lawrence valley; Stella in southern Saskatchewan; Alderbrooke, who checked in Dec. 1 from Lac St.-Jean in Québec but didn’t upload any data; and Amherst, who was still way up on James Bay on Dec. 14. All had low battery voltage, and unless they’ve had a good deal of sun it may be a while before they reconnect and bring us up to date — especially those like Wells with very old transmitters that may be struggling more than usual with short days and the low northern solar angle. Sunshine has been in short supply across much of the northeastern U.S. and southeastern Canada, however, so we may have to be patient.

One thing we’ll be watching is what happens on New Year’s Day, since every first of the month the transmitters are supposed to send up a signal flare, so to speak, even if they don’t have enough juice to transmit data — just a little “Here I am!” connection. That’s how we heard from Alderbrooke last month, and perhaps this time we’ll get more information on her situation.

From Us to You, Thank You
Two New Faces

2 Comments on “Columbia and Fond du Lac: An Update”