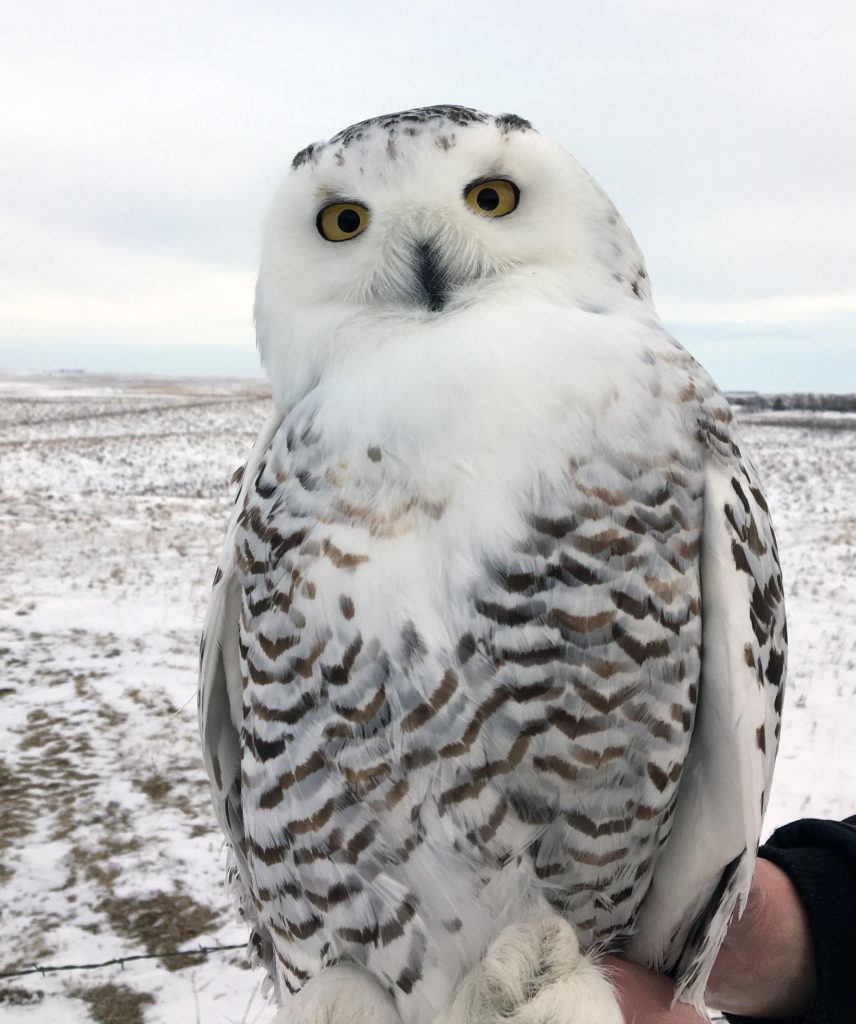 Coteau, a third-year female, is the latest SNOWstorm owl to be tagged on the Great Plains. (©Matt Solensky)

As we wrap up 2019 today, we have a new owl to introduce, and an update on the rest of the gang.

New to the crew is Coteau, a third-year female that Matt Solensky captured Dec. 22 near Pearl Lake in western Stutsman County, North Dakota — almost the same spot where Matt tagged Pearl back in November, in fact.  He’d been trying for a third North Dakota owl for a while, and Coteau’s capture came at the end of the busy weekend.

“On Friday afternoon [Dec. 20] I found a bird south of Pettibone, ND,” Matt reported, “a long way off on the same tall power line where I’ve had caught birds before. She waited until just about dark to make a few passes at the bow net. I went back Saturday morning and relocated her, but she was halfway between the only two roads in the area and the closest I could get was half a mile.”

Matt had just decided it was pointless when he got a text from owl enthusiast Rick Bohn that he’d found another owl — and en route to that one, Matt found a third, for which he set up.

“After nearly two hours and no passes (and her eyes beginning to droop) she perked up, pooped and flew north — not at the bait but, as I would soon learn, towards the owl Rick was watching, which had just taken flight. We lost track of both birds and I took a lunch break.” That afternoon Matt found the first owl of the morning, identifiable by some unique feathers on her forehead. “She made three half-hearted stoops at the bait before it got pretty dark and a great horned owl came along and bumped her.”

So, two days of hard trapping, and nothing to show for it. “On Sunday afternoon I was on my way to look for birds when Rick texted me that he found another bird right near where I had caught Pearl back in November. As I was setting up she left her perch and moved just a few hundred yards to a different telephone pole. Forty-five minutes after I set up she made one pass at the bow net pigeon, circled around, hit the cage and I had her.”

Matt picked the name “Coteau” for the Coteau de Missouri (Missouri Plateau), the region of hilly prairie that covers much of central North Dakota east of the Missouri River and west of the Missouri Badlands where she was trapped and released.

It’s lovely country, but the cell reception isn’t always great — which is likely why we haven’t had a data transmission from her since her release. We’re not concerned, but we had held off saying anything about her tagging in the hopes of having a first track map to share. We decided to go ahead without one, and we’ll post as soon as Coteau checks in.

Here’s a year-end wrap-up on the rest of the bunch, west to east. Over in southern Saskatchewan, Pettibone remains near Quill Lakes, an internationally important saline lakes wetlands that supports 5 percent of the world’s piping plovers, along with more than 100,000 other shorebirds — though at this time of year they’re all long gone south. Pettibone’s territory is just west of the small town of Wynyard, which (as the town’s history page informs us) was settled in 1904 by a group of Icelandic immigrants who built sod houses on the prairie, “soon followed by a large contingent of Ukrainian settlers and then by those of British and Polish descents. The Canadian Pacific Railway (CPR) came through Wynyard very early and was a major force in the growth of this fine community,” and the town was named for a CPR official.

In southern Manitoba, Stella remains equally faithful to her winter territory along Whitewater Lake near the town of Boissevain. We’ve mentioned Boissevain’s epic-sized purple martin colony previously, but one alert SNOWstorm reader also let us know that the town is also home to Tommy the Giant Turtle, a 6.7-m (22-foot) fiberglas turtle standing in his hind legs and waving Canadian and American flags, in honor of the international border just a short drive to the south. (And on the North Dakota side of the border, south of Turtle Mountain in Bottineau, stands another “Tommy the Turtle” statue, this one astride a snowmobile.)

Enough reptiles. Down in North Dakota, Medina continues to wander around, passing this past week through parts of Emmons, Burleigh and Kidder counties, fetching up a few days ago near Steele, ND, the Kidder County seat. Steele bills itself as the “Four Season City” and promotes local birding on its website, but if the real birds elude you, Steele is home to “Sandy,” at 38.5 feet (11.7 m) the largest — albeit metallic — sandhill crane in the world, just off I-94.

Down in South Dakota, Pearl is in Codington County, a few miles west of the town of South Shore. Sadly, there are no giant animal sculptures in South Shore that I am aware of, but the town lies along the evocatively named Punished Woman Lake, named for a Lakota legend. 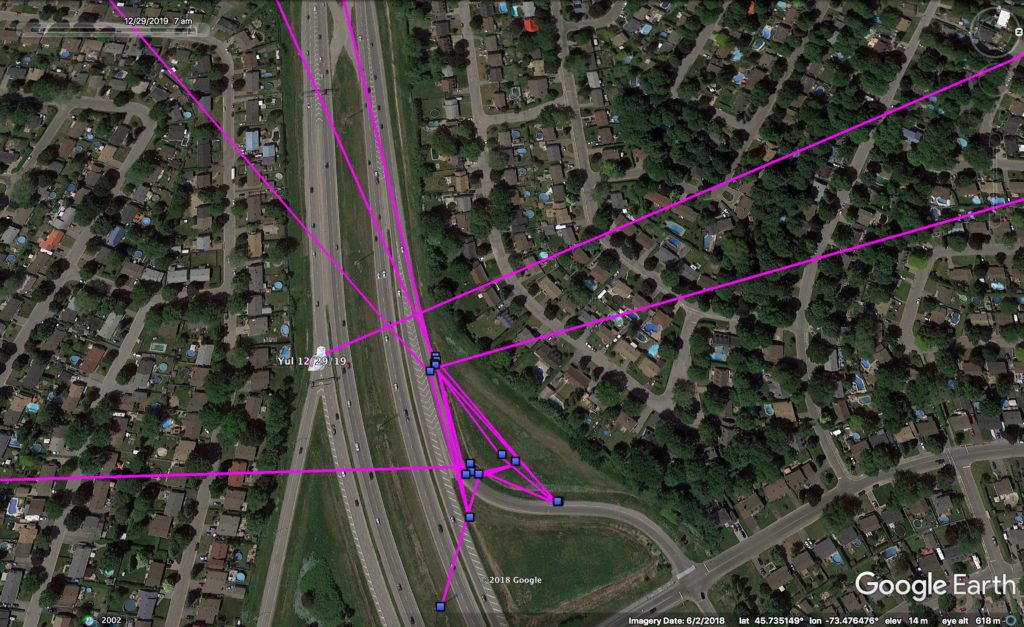 Why we worry about Yul. (©Project SNOWstorm and Google Earth)

In Québec, our two tagged owls are less than 30 km (19 miles) from each other. Otter remains in farmland near Sainte-Anne-des-Plaines, often hanging around a large prison complex, while Yul — who has flirted repeatedly with trouble in the past at airports — has come off her stint on the St. Lawrence River to dive into the suburbs of Montréal at Charlemagne and Repentigny, hunting alongside busy highways, malls and industrial areas. At dusk on Dec. 29 she was sitting on a streetlamp by an exit ramp on Autoroute 40 (Autoroute Félix-Leclerc), one of the most heavily traveled highways in southern Québec. Stay safe, girl — and happy 2020, everyone.

Update - Coteau
Where Your Donation Goes

7 Comments on “Coteau, and the Rest of the Crew”