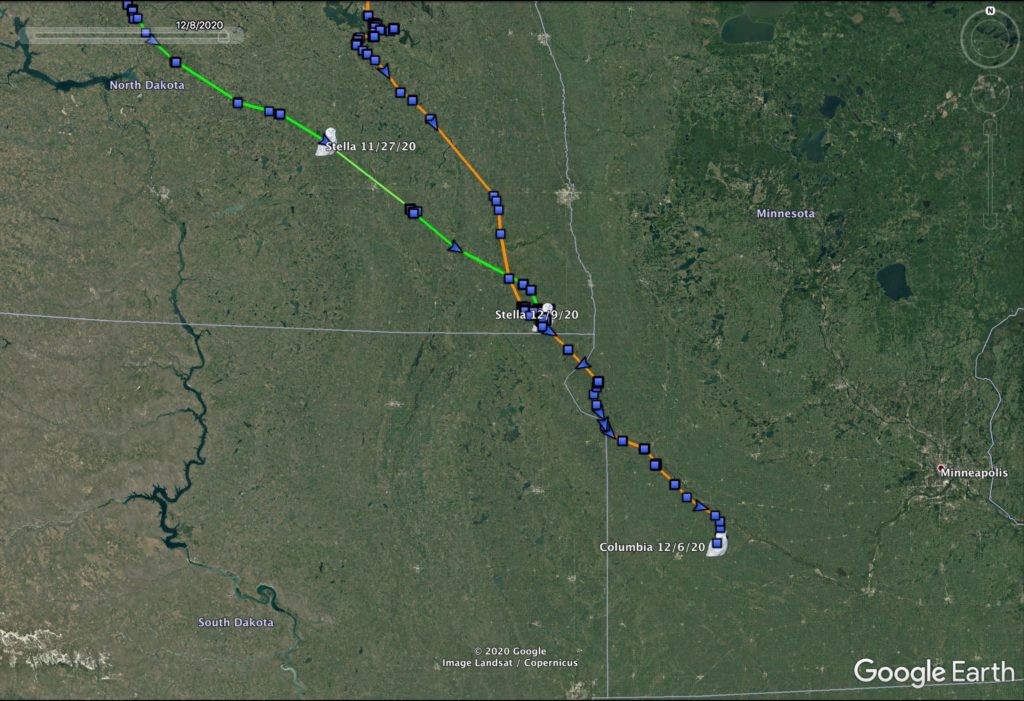 Stella (green) and Columbia (orange) have been moving through eastern North Dakota and, in Columbia’s case, into the Minnesota River valley of southwest Minnesota. (©Project SNOWstorm and Google Earth)

All three of our returned snowies have continued to move over the past week or so — one of them into a spot we would hardly have chosen for her. 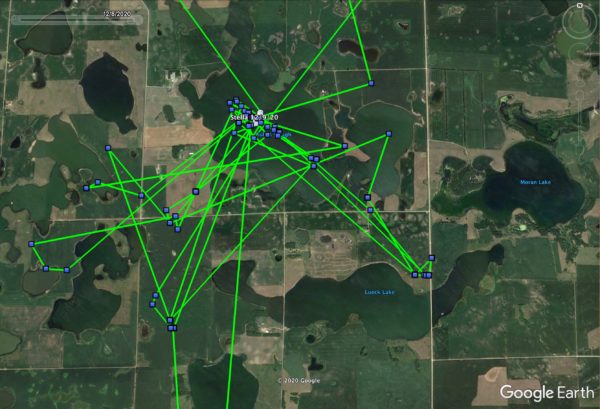 Stella’s movements have been clustered around a series of lakes, wetlands and ag fields between Hankinson and Lidgerwood, ND. (©Project SNOWstorm and Google Earth)

Out west, Stella and Columbia have continued to take remarkably similar paths out of Manitoba and across North Dakota. Stella, at last report on Dec. 9, was between the towns of Hankinson and Lidgerwood in Richland County, ND, just a few miles from both the Minnesota and South Dakota lines. It’s an agricultural region with a lot of federal waterfowl production areas, several units of Sheyenne National Grassland just to the north, and clusters of national wildlife refuges to the west, which preserve the remnants of the region’s original tallgrass prairie wetlands.

Stella’s been hanging out on and around Gully’s Slough, a shallow, 423-acre lake that’s frozen up, giving her an icy base of operations at night, though she’s done a lot of early-morning and late-day movements around several other small lakes and ponds in the area.

Columbia, meanwhile, was around Devils Lake in Benson and Ramsey counties, ND, for several days at the end of November, then during the first week of December made a steady push to the south and east across eastern North Dakota. She crossed Roberts County, South Dakota to the Red River Valley and then followed the Minnesota River valley to near Vesta, right on the border between Yellow Medicine and Redwood counties, Minnesota. That’s where she was when she last checked in Dec. 6.

Sue Foote-Martin and Mark Martin posted a great update about Columbia to the members of Madison (WI) Audubon, which sponsored her transmitter; you can read it here.

Dorval drew a giant curlicue on the map, spiraling into Ottawa. (©Project SNOWstorm and Google Earth)

That brings us to Dorval, whom you may remember is an owl with a history at airports. This adult female had been trapped and moved several times from the Montréal airport before she was caught there once again last January, fitted with a transmitter and relocated — only to return once more for yet another trap-and-move session. That one finally stuck.

She came back from what we think was a successful breeding season in northern Québec, heading down to the Ottawa River valley by Dec. 1. That’s an area that traditionally holds a number of wintering snowies, and we were hopeful Dorval would like the looks of the place, find a lot to eat and stay.

No such luck. Instead, Dorval flew east and scribed a big curlicue around the city of Ottawa, hitting the Ottawa river north of town and following the Rideau River south to — you guessed it — the Ottawa International Airport. 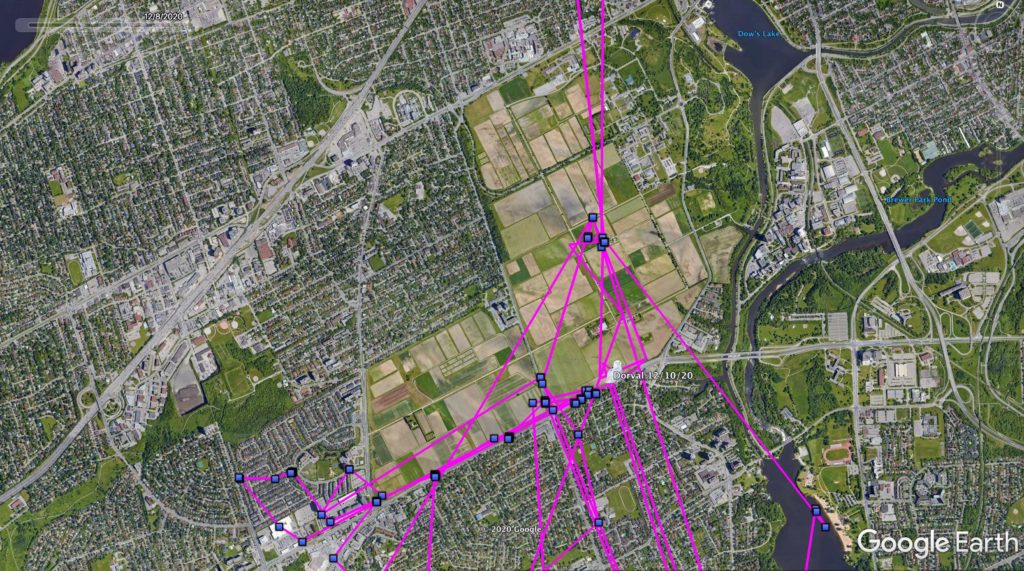 Will she stick? The 427-ha (1,055-acre) Central Experimental Farm in the middle of Ottawa would seem to be the perfect place for an urban snowy owl. (©Project SNOWstorm and Google Earth)

That said, by the time of her last check-in on Dec. 10 she was spending most of her time north of the airport, in and around the Central Experimental Farm, a remarkable, 427-ha (1,055-acre) working farm, research center, wildlife garden, arboretum, ag and food museum — an enormous area of open space smack in the middle of urban Ottawa and which, since it dates to the 1880s, is also a national historic site.

To a human’s eye, the farm would seem to be the perfect hangout for an urban snowy owl, though much will depend on what the local prey base is like this winter (rodent populations rise and fall cyclically, and this could be a down year for meadow voles and the like in Ottawa), as well as competition from other large raptors. But folks in surrounding neighborhoods like Central Park, Fisher Heights and Courtland Park ought to keep an eye on their rooftops for a large, white owl — and we’ll keep hoping Dorval steers clear of the airport.

Redwood's Return
An Owl on a Mission