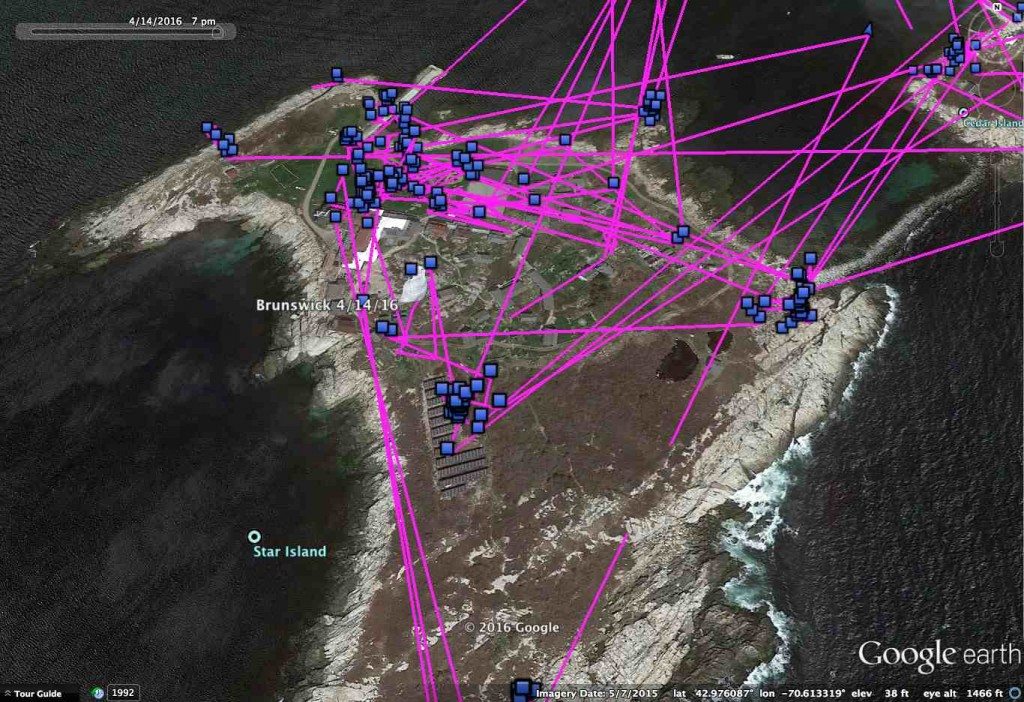 Brunswick’s been all over Star Island in the past week, especially the historic Oceanic Hotel. (©Project SNOWstorm and Google Earth)

It’s that time of year — not a lot to report, because almost all of our tagged owls have moved out of earshot, so to speak. This past week, only two birds remained within cell range: Hardscrabble and Brunswick.

Brunswick is still hunkered down in the Isle of Shoals, though I suspect the attraction is eiders, gulls and other waterbirds, rather than the archipelago’s famous scenery. This past week she spent a lot of time on Star Island, which as noted in previous updates is home to a hotel and conference center affiliated with the Unitarian Universalist and United Church of Christ traditions. Brunswick clearly likes the view from the roof of the island’s historic Oceanic Hotel (and its flagpole on the front lawn, which proved to be a favorite perch).

Hardscrabble was a bit of surprise. He had skipped a transmission on April 7, and given that he was about halfway to James Bay at the time, we assumed he’d kept moving north. 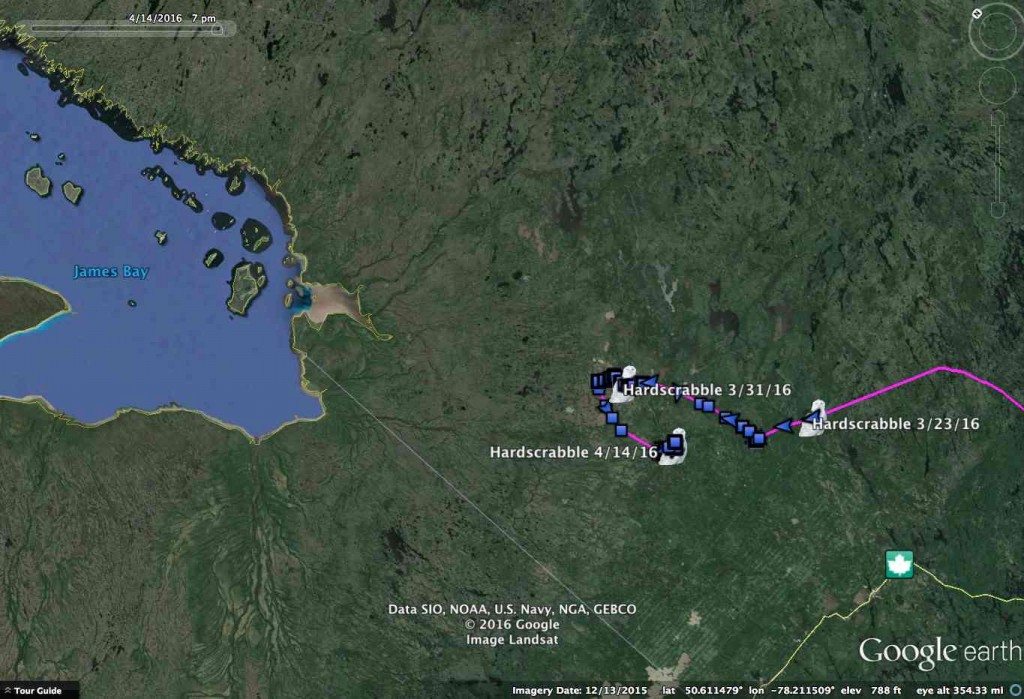 Hardscrabble’s U-turn on the way to James Bay (orientation is with north to the upper left). (©Project SNOWstorm and Google Earth) 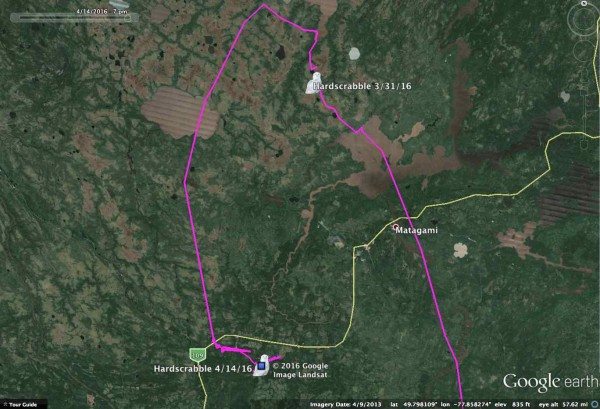 For the past two weeks or so, Hardscrabble’s been in a taiga landscape of spruce/birch forest and large clearcuts. (©Project SNOWstorm and Google Earth)

Instead, he flew 16.5 km (10 miles) north and then looped west and back south, and spent a week and half in an area of dense spruce and birch forest checker-boarded with clearcuts, just south of Quebec Route 109, and about 50 km (38 miles) south of where he’d been March 31.

We did have photos from Josh Fecteau in Maine (who had been keeping an eye on Brunswick earlier in the winter) of one of our tagged owls at Sanford, ME, on April 8. The bird was being mobbed by crows at the Sanford Lagoon, and based in the pattern was almost certainly Casco. 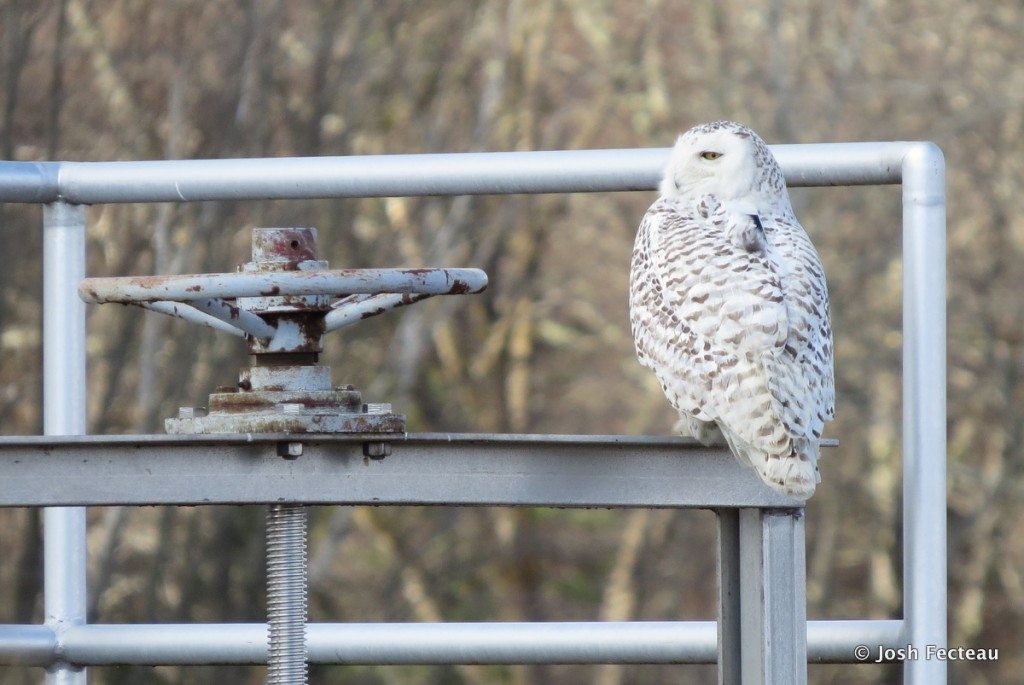 Casco? Almost certainly. Josh Fecteau got this shot of her at Sanford Lagoon in Maine on April 8, a day after she checked in on the Massachusetts coast. (©Josh Fecteau)

Just the day before, Casco had checked in from the mouth of the Merrimack River mouth/Parker NWR in northern Massachusetts, but she didn’t phone home on the 14th — she’d made some very long-distance flights earlier this winter, and I expect Casco had moved out of cell range by the time her transmitter tried to connect the evening of the 14th. 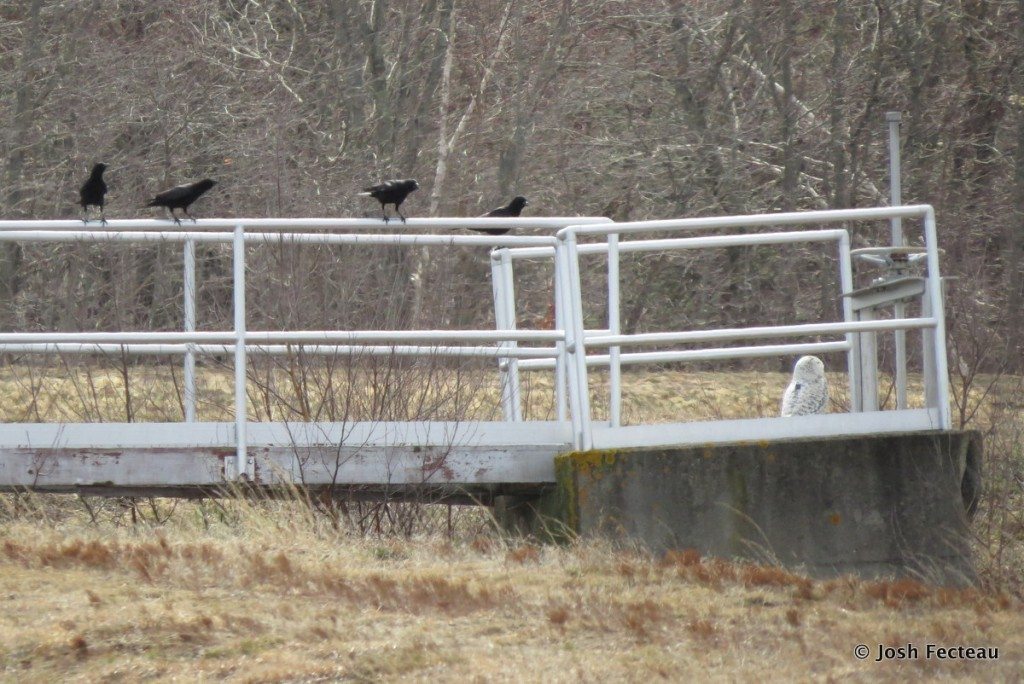 Don’t you hate it when the locals are rude? A group of American crows mobs Casco. (©Josh Fecteau)

(Thanks, as always, to Josh and the other photographers who have shared their images of our tagged birds this winter — it’s been very much appreciated.)

Into the North
Wampum's Gone