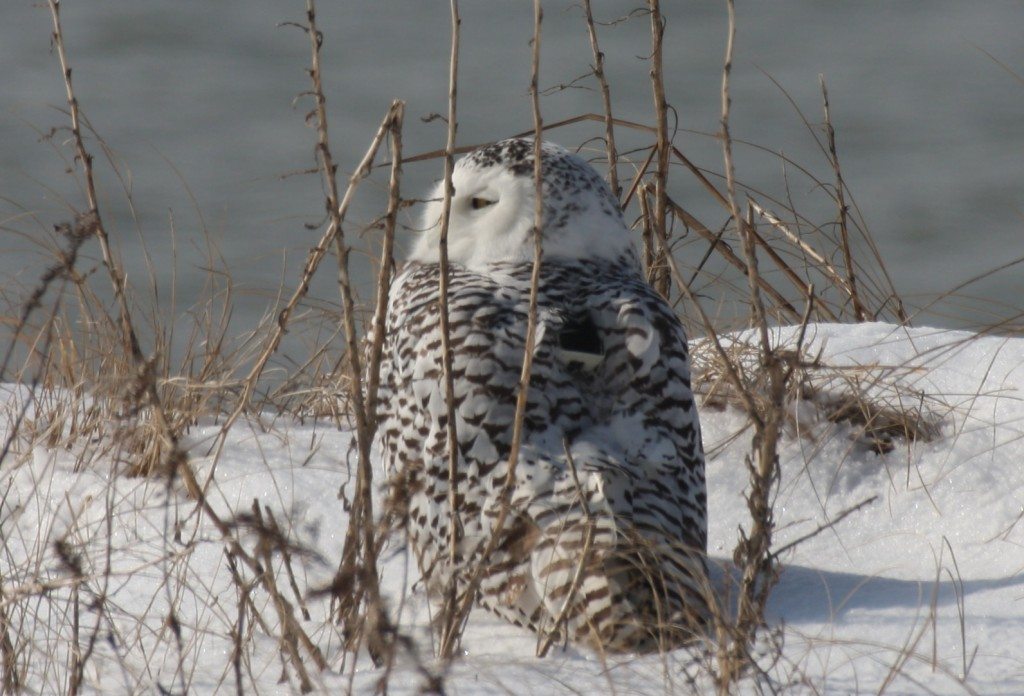 Duxbury, hanging out on her namesake beach. (©Frederick Bowes)

Photographer Rick Bowes dropped us a line yesterday with a couple photos of Duxbury, the immature female that Norman Smith relocated Jan. 29 from Logan Airport in Boston to Duxbury Beach, about 30 miles to the south.

“After seeing from your data that she was briefly on Duxbury Beach between the bridge and the pavilion building at the same time that I had gotten some shots from my car of a Snowy within 20 yards of the road, I went back and checked the photos and sure enough…  it was Duxbury!  My shots were taken at 12:44 and 12:45 p.m. and your data point for 12:33 has her in almost exactly the same spot.  Though she was somewhat obscured by marsh grass the pix show the transmitter quite clearly in these cropped photos,” Rick said.

“By the way, there were other photographers on foot trying to get close, and you can see [from the map] that she had moved north (away from them) by 1:04 p.m.  They would have had a more clear photo angle and the sun behind them…but I doubt they would have gotten the transmitter from their location and the bird was quite still – until it apparently flushed shortly after I inched on down the road.”

It’s always good to get photos of our tagged birds in the field, and we appreciate both Rick’s sharing them with us — and especially his caution in not disturbing her.

Ironically, by last evening Duxbury was well to the north at Scituate, but Sandy Neck was tucked in just a few hundred yards from where Rick took his pictures.