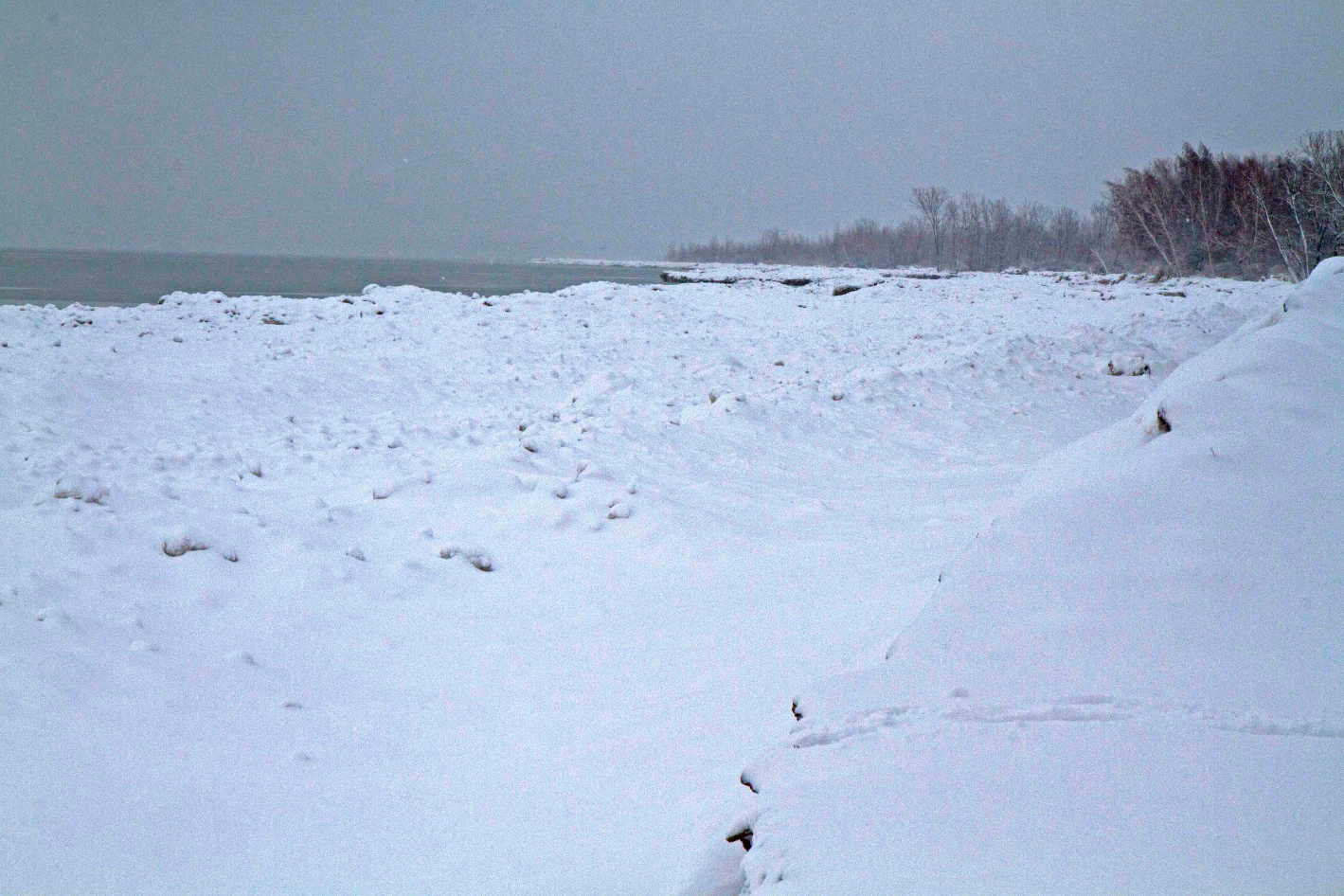 Snowy owls…they’ll break your heart, and take your breath away, sometimes all at once. Here’s the story of my attempts to tag a new owl near Erie, Pa. — and also the latest on Erie the owl, one we’ve been tracking since last winter.

Sunday and Monday I was in Erie, trying to catch a snowy owl in Presque Isle State Park (PISP), which occupies a long, curving peninsula sticking out into Lake Erie. It’s by far the most reliable place for snowy owls in Pennsylvania, and in recent weeks there have been at least four around.

With the support of park manager Harry Leslie, and permission from the state Department of Conservation of Natural Resources, I headed up from my home in southeastern Pennsylvania, a six-hour trip. It was calm, overcast and above freezing when I arrived — tropical conditions for this part of the snow belt in January.

I was met by PISP environmental educators Emily Hauser and John Laskos, who gave up their day off to help, and by my friend and colleague Drew Weber from Syracuse, who also serves as SNOWstorm’s tireless webmaster.

We drove out the 11-mile-long (17.7 km) peninsula, stopping to scan the shoreline for owls. The wind, waves and deep cold of recent weeks had formed immense “ice dunes” along the lakeshore, extending far out into the water and rearing 12 of 15 feet high in many places. Offshore, small ice floes swirled, as endless flocks of common mergansers and other ducks streamed east.

There were no owls along the more traveled parts of the peninsula, where hikers, photographers and folks with dogs were all out in force. So Plan B was to load up all of our gear into two of the park’s 4WD Gators, which would carry us out to Gull Point — the farthest tip of Presque Isle, about 1.5 miles from the end of the road, and the best place for snowies.

Unfortunately, about a third of the way out we hit a snag — ice dunes had blocked a small part of the trail, just enough so that we couldn’t safely get the Gators through. So we grabbed everything — bownet, bal-chatri trap, my huge (and heavy) tool box, a tote bag with radios and lanterns, backpacks and a good deal more — and hauled it all the rest of the way out the snowy trail.

Because it was a calm, mild Sunday, there were a lot of people on Gull Point, and those we passed enthusiastically told us about the two owls out there — and how tame they were, how close folks could get for photos. I had a sinking feeling, confirmed when one trio of young hikers showed us their photos…of the owls flying away.

When we arrived, one darkly marked snowy had retreated to an ice floe several hundred yards offshore, while the other, we were told, had flown across the bay. Fortunately, Drew eventually spotted another snowy perched along the edge of the point, in a really ideal location for trapping. I was able to set up the bow net on a sand spit about 100 yards from the owl, with a nice clean line of sight from it to the trap and lure. It was after 4 p.m., so we settled down to wait for dusk, when snowy owls usually become active. Drew, Emily and John perched on the observation tower, from which they had an eagle’s view, while I sat among the beach berm some distance from the trap, my radio trigger beside me.

As twilight came on, the owl became more animated, watching flocks of waterfowl pouring by — the waters around Presque Isle were a real buffet for a hungry snowy owl, with mergansers, scaup, redheads, buffleheads, coots and much more. Sitting on a driftwood log, waiting, I found a large owl pellet by my knee. Gray feathers; maybe a coot, I wondered? Then I found immediate confirmation, in the form of two dismembered coot legs.

Maybe all that food was just to tempting. As it grew dark, the owl turned away from our offerings and launched itself out into the bay. Silhouetted by the lights from the city, it was easy to see sitting on the ice a few hundred yards out. So I set out a couple of lanterns by the net, a trick that often works — kind of like a neon sign in a diner window. But not this time; the owl eventually vanished, and Emily, John, Drew and I faced the long walk back through the dark, lugging our equipment.

The trip back was tiring, but a lovely and somewhat surreal experience nevertheless. To our left, the lights from Erie cast an orange glow on the low and thickening clouds, bright enough that we didn’t need headlamps to follow the snow-covered trail. But to our right, to the north, the sky over Lake Erie was a cold blue-black, as though we were peering deep into an abyss.

Monday morning it was snowing, but Drew and I headed back to the park, spending the morning and early afternoon checking the ice dunes and beaches. We did see one distant snowy on the ice, much too far away to have a realistic chance to lure it in, and we finally headed to town for a late, hot lunch.

Drew had to head home, but late in the day I drove back onto the peninsula for a final attempt. The snow had stopped, and the wind, which had been calm for two days, was picking up as the temperature began to fall.

At Beach 11, I ran into Bob Grubbs, a local wildlife photographer, who suggested I try the area around North Pier and the lighthouse. We drove back to check, and although there were no owls in sight, we kept gabbing about birds and other shared interests.

And then, after 15 minutes of chatting, I glanced down the causeway to the lighthouse for perhaps the twentieth time — and realized that now, a large, heavily marked owl was sitting just 80 or 90 yards from us, where none had been moments earlier. I scrambled back at the car, rigging the bownet and lure, and carried the net up onto the pier within sight of the owl.

I was focused on getting the net rigged and the trigger set — and when I looked up a moment later, the owl was gone.

Under lowering clouds and falling snow, the waters of Lake Erie coagulate into slush and ice — perfect habitat for snowy owls. (©Scott Weidensaul)

As I breathed a curse, a movement overhead caught my eye. The owl had actually come swooping in around me, attracted by the fluttering of my lure pigeon (which was wearing its custom, protective leather flak jacket).

I backed off quickly, and the owl landed just 20 or 30 yards from the trap. Then it made a number of low passes, landing progressively closer — typical behavior. It finally was sitting on the ground just a few feet from the trap, eyeing up the pigeon, while Bob and I his behind trees not far away, my thumb on the  trigger.

The owl leaped into the air, hovering inches above the pigeon — then, inexplicably, veered off and flew across the channel, disappearing into the night.

“Crestfallen” does not begin to describe how I felt — success was so close it was palpable, but that’s the way it sometimes goes with wildlife research. All you can do is try — and whatever happens, it’s never dull.

(A special tip of the hat to Matt Dickey at Diver’s World in Erie. I needed some thick neoprene to make an emergency repair to a transmitter I had, and he responded to my request by giving me an entire used wetsuit, with the right thickness of neoprene in the sleeves. Thanks for the help and generosity, Matt!) 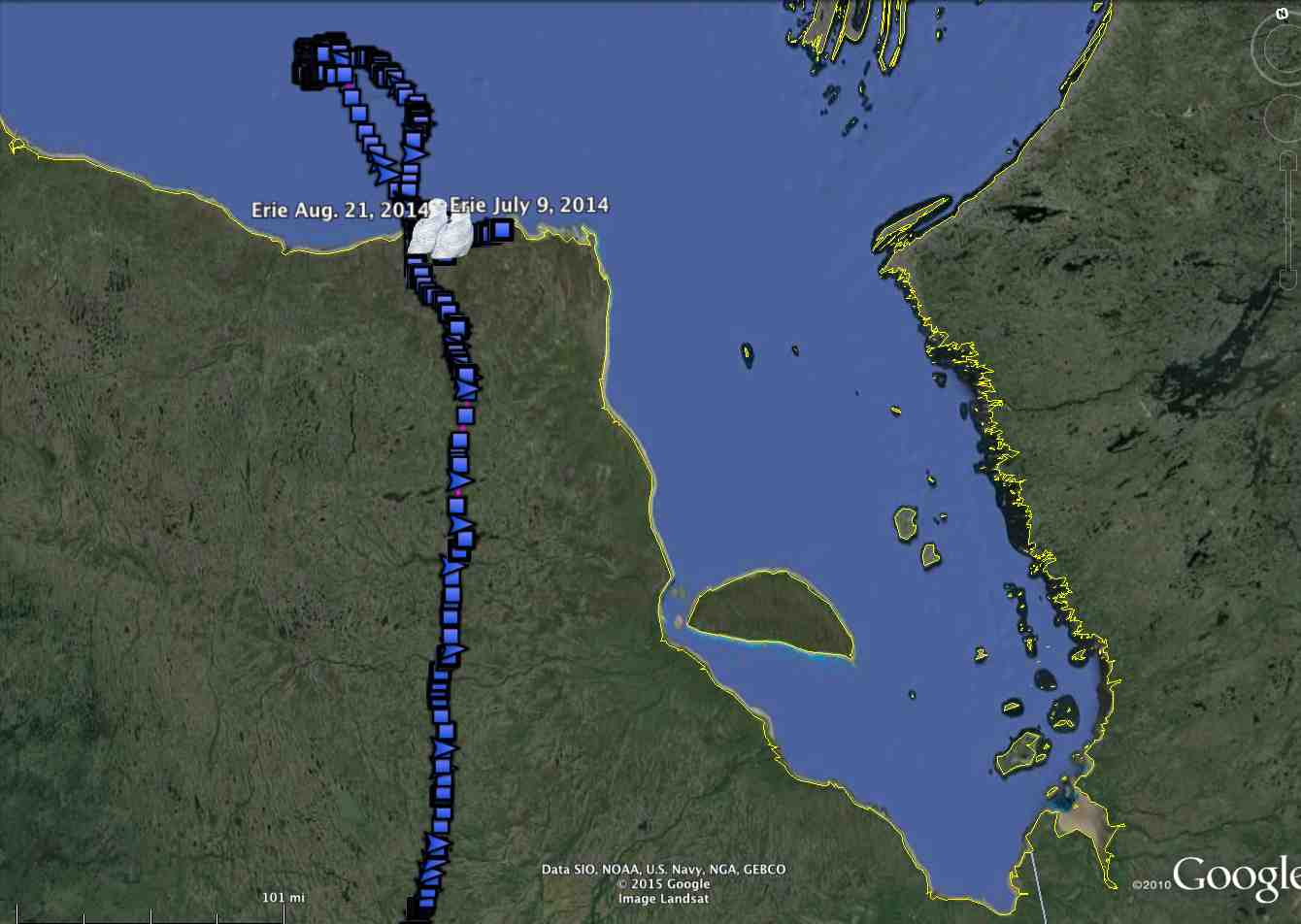 Unlike Millcreek and Century, Erie moved up the west side of James Bay last spring, and spent the summer along (and on) the southern edge of Hudson Bay. (©Project SNOWstorm and Google Earth)

So that’s the news from Erie, Pa. But what about Erie, the owl?

We caught Erie on Jan. 19 last year, at the Erie International Airport, and along with Millcreek, tagged the same night, he has been a treasure trove of data. Millcreek continues near Toronto (we’re withholding the exact location until he moves on), but Erie just reappeared last week, and is steadily uploading his stored data covering his summer and autumn movements.

Monday night he sent in a fresh batch, about 1,500 locations covering the period through August 21. Unlike Millcreek and Century, which went northeast into the Ungava Peninsula, Erie headed up Lake Huron through central Ontario, and up the west side of James Bay.

By mid-June he was on Hudson Bay just west of James Bay. Check out his map, and zoom in on the period when he was out on Hudson Bay itself. You’ll see that his tracks follow curlicue circles. Why? Because he was riding on icebergs that were drifting on the winds and tides. Like most snowy owls, Erie loves ice.

Through most of July and August, Erie was using a fairly small area about 10 miles (16 km) wide along the Hudson Bay shore. This is part of Polar Bear Provincial Park, at more than 9,000 square miles (23,500 sq. km) the largest and most northerly park in Ontario — and by far the most remote. There aren’t even any aboriginal communities within the park, just a wealth of subarctic wildlife, including the namesake polar bears.

It will take three or four more data transmissions to get caught up with all of Erie’s wanderings, but we do know where he’s sending data from now. When he first checked in a few days ago, he was on the Bruce Peninsula between Georgian Bay and Lake Huron in southwestern Ontario.

Monday evening he had moved farther south, into the flat farmland about 40 miles (65 km) north of London, Ontario. It’ll be interesting to see if he heads back south to Lake Erie, where he spent most of last winter out on the ice — and where the local birders would love to see him again.