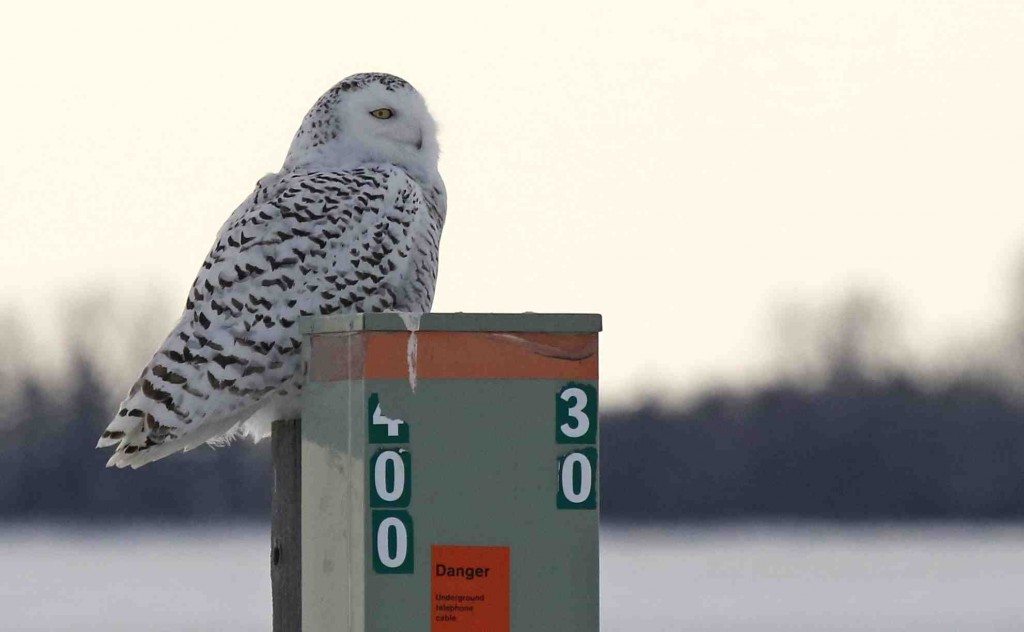 Dakota on one of her favorite perches last week, on the prairies of southern Saskatchewan. (©Val Mann)

One of the best things about Project SNOWstorm is the way it’s created a community of people interested in snowy owls — we researchers who form the core team, the hundreds of people who have contributed to make the work possible, and the thousands of people who follow what the owls are doing every winter.

As we’ve mentioned several times lately, we’re especially lucky to have folks on the ground who are willing — sometimes on very short notice — to check on our tagged birds if we suspect there’s a problem, or just to get eyes on the owl to make sure everything looks good after a summer up in the Arctic.

Last week, Patricia and Dan Lafortune from Ottawa checked out returnee male Hardscrabble in southern Ontario — and we just got terrific photos that sisters Val and Kim Mann took of Dakota, who is back on the prairies southeast of Regina, Saskatchewan. (Thanks to snowy owl researcher Dan Zazelenchuk for connecting us with Kim and Val.)

Griddle-flat and mostly treeless, the Canadian prairies are perfect winter habitat for snowy owls, and one of the most reliable places in the world to find them at this time of year. Here’s the view to the north near her perch…

…and the view to the south.

The sisters found Dakota last Thursday in wheat fields near the town of Francis, SK, where she’s been since Dec. 9. Flat and open, this is exactly what a snowy owl is looking for in terms of winter habitat — the reason the Canadian prairies are perhaps the most reliable place in the world to find snowy owls during the non-breeding season. Here’s a panorama shot of the landscape where Dakota’s spending her time.

“She was sunning and would stretch a wing or ruffle her feathers, but showed no intention of moving,” Kim reported. She and Val tried moving to a different angle, but Dakota was, as you can see, pretty far away for good photographs. 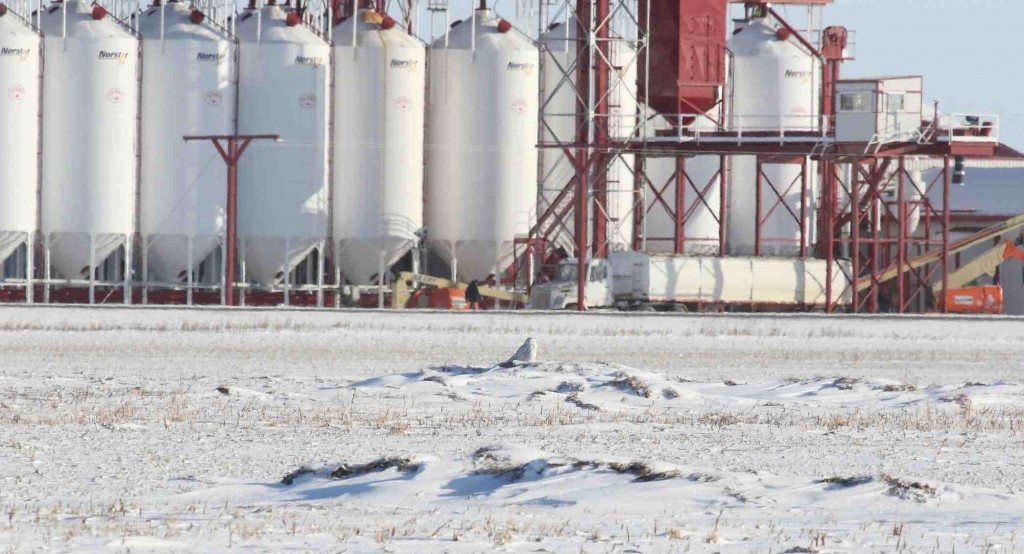 A little elevation and good visibility — often the combination a snowy owl is looking for. (Kim Mann) 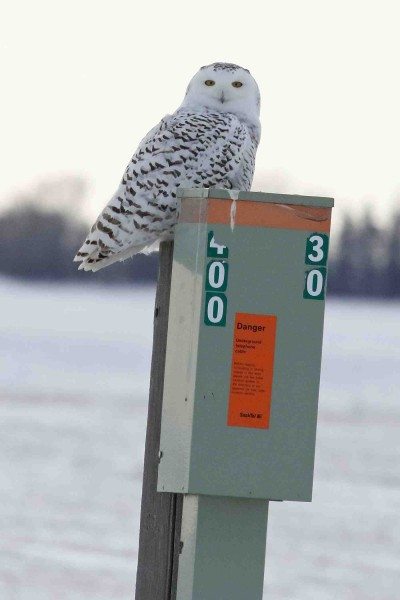 Then the Mann sisters got very lucky. “[Dakota] decided to fly right in front of the car up to what I think is a favored perch — a power-type shot pole. She allowed us several shots before she eventually flew southeastward.”

The photos are super from a couple of perspectives. Most importantly, they confirm that almost a year after deployment, Dakota’s transmitter is riding perfectly high in the middle of her back. There may be some occlusion of the solar panel by her back feathers, but her unit is recharging well despite that, and despite the very short days at this season and that latitude.

Meanwhile, Dakota’s transmitter keeps uploading hundreds of stored data points every few days, so we are quickly capturing her summer movements — or lack of them, since she spent the month of June essentially immobile, incubating her clutch of eggs in the Arctic. Once we have her full data recovered, we’ll give a blow-by-blow on Dakota’s maternal summer. In the meantime, thanks again to Kim and Val for the great photos. 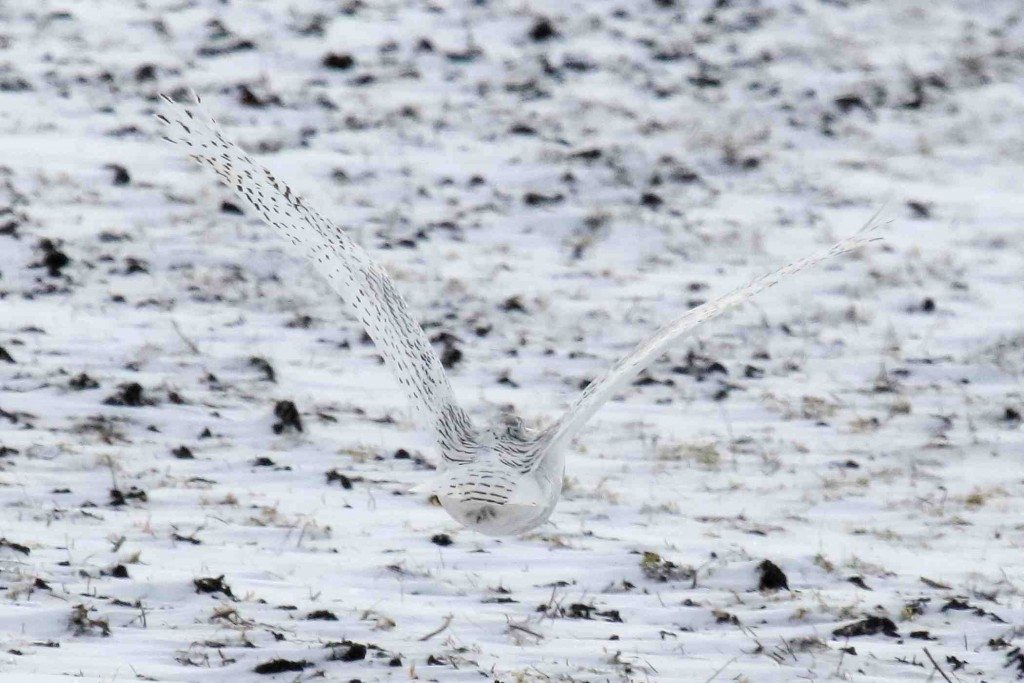 Val and Kim’s photos show that Dakota’s transmitter is riding perfectly, high and in the middle of her back. (©Kim Mann) 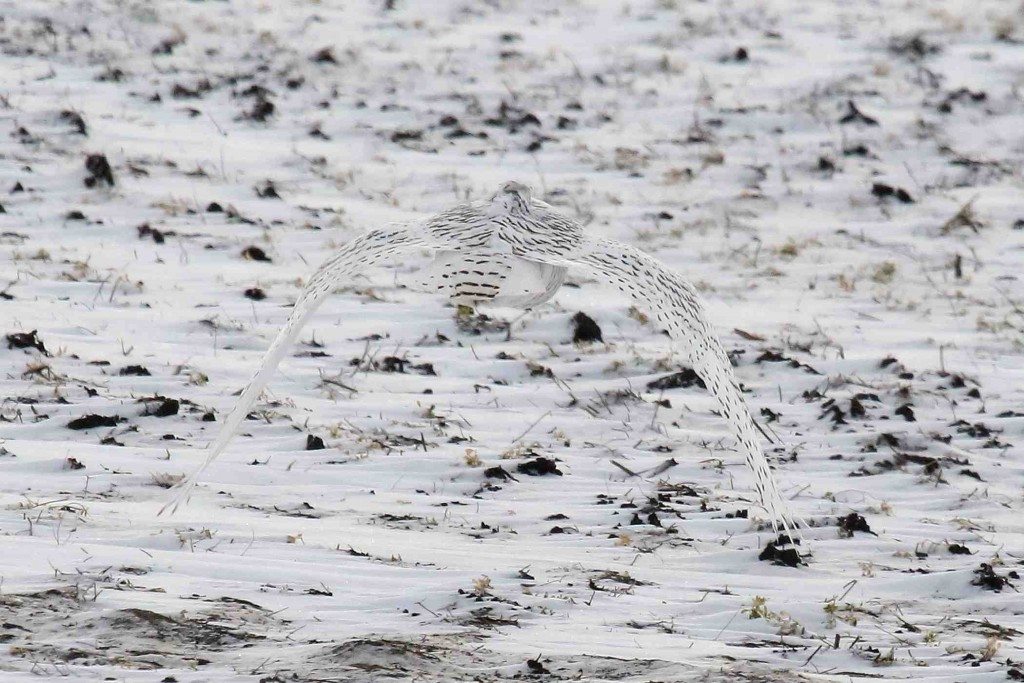 A Baltimore Four-peat
Returning Owls! Hardscrabble and Dakota Are Back