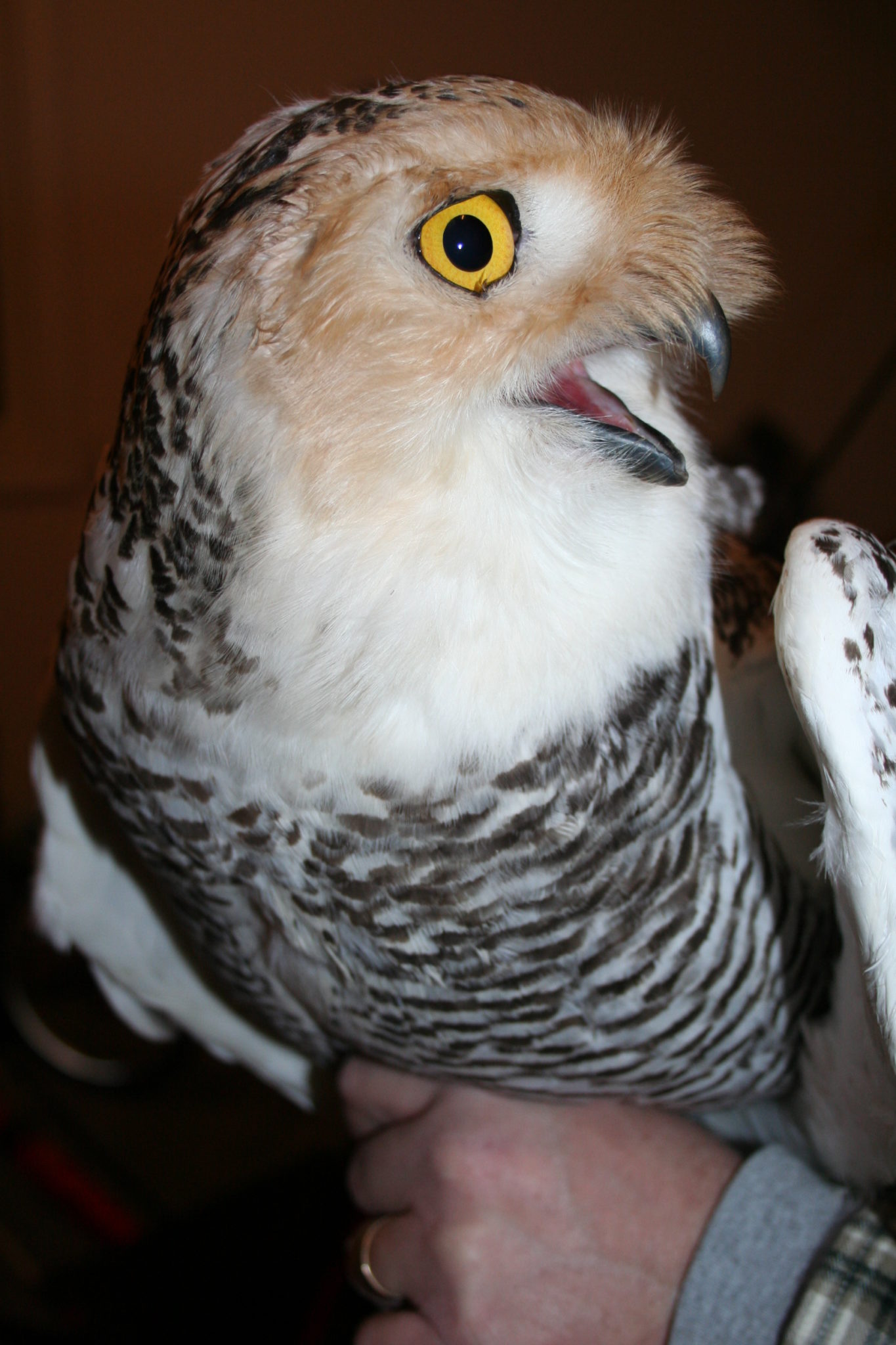 This snowy irruption erupted as I was making plans to spend some vacation time in Delaware for the New Year. While everyone else was running around with their hair on fire (I’m bald, Scott! no fair!) I was busy ignoring the dozens of daily, sometimes hourly, emails of preparation as this project was pulled together. Instead I was out roaming the Delaware seashore in search of snowy owls to band. Although not as high-tech as the GPS-GSM transmitters we’re using, marking a bird with a numbered leg band is still a simple, effective method of studying their movements.

I tried first for an owl on Savage Ditch Road on December 30. I had arrived early in the day to locate the snowy and found her in the dunes, ignoring the many curious people observing and photographing her. I tried surf fishing until the last birders left and dusk approached. I checked her location, grabbed the net from the car and….   no owl. She had left early to hunt. I set up anyway in hopes I would have better luck fishing from the dark sky than I had from the dark surf, but that was not to be.

I returned the next day, New Year’s Eve, and found her again. I spoke with several people and learned about other owls in the area. One story I found particularly intriguing was that of an owl on Cape Henlopen that had been defending a dolphin carcass from vultures. This observer had not seen the owl feeding on the carcass (it had been buried in the sand, but an animal had partially excavated it), but the possessive behavior seemed to suggest the owl might be using it.

I left to locate another owl a short distance up the beach and met a ranger that told me about an owl on Henlopen that had actually been feeding on a dead dolphin. “That owl’s face is such a mess nobody wants to take its picture anymore,” he said. The ranger also told me the owls on the Cape had not been seen for at least a day.

Towards dusk I did manage to trap the owl at Savage Ditch Road, which proved to be a beautiful hatch-year (immature) female.

After sharing the owl with a group of people who were on the beach to say goodbye to 2013, I returned to my car to band the owl. The adrenalin was wearing off and my senses were returning to normal, and that’s when I began to wonder, What is that smell? 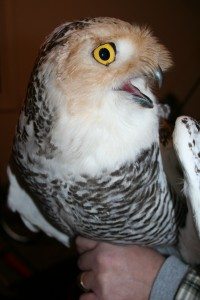 face of the Savage Ditch owl from Delaware showing the staining

It was something like (but not quite like) dead fish, and didn’t smell like a dead anything that I was familiar with. It was overpowering, but I’m a raptor bander and I had to complete my task whether my subject had just eaten skunk or roadkill or whatever this one (gag) had been into. Then in the light I realized her face, which had appeared so white and wonderful as I pulled her from the mesh, was yellowy brown and — well, let’s just say it matched her perfume.

So could this have been the owl that was feeding on a dead dolphin? We may never know.  There’s nothing in the scientific literature documenting snowy owls scavenging dead marine mammals, but they will scavenge dead birds, like loons, and I think it’s entirely possible that it does occur. Most raptors are opportunistic, particularly as they learn to hunt or when fresh food is scarce.

Interestingly, one of the owl’s feet was matted with sand-spurs, very sharp, tough, painful burrs that not only stick to fur or feathers, but will pierce skin. This may have made it difficult or uncomfortable to hunt, so carrion might have been a good option for her. (I removed the burrs.) 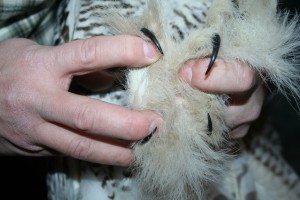 the ‘hairy’ foot of the snowy owl, free of burrs

details about snowy owls. We’re going to continue to work in Delaware this winter, but you can help. If you encounter a snowy owl feeding on a dead dolphin, please get photos and take detailed notes, which will help us document this previously unknown behavior.

Release the maps!
Over the top!

2 Comments on “A face only a mother (and a birder and a researcher and well, just about anyone) could love”