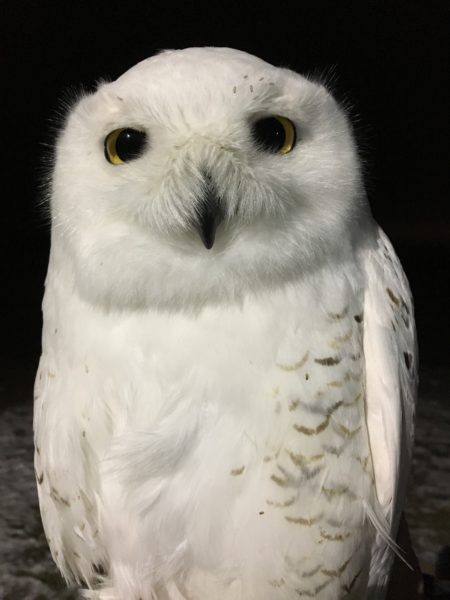 This was supposed to be a long, chatty update about the status of all our tagged birds, the first in more than a week, with apologies for being behind with blog posts. Instead, we have to start with some somber news: we lost Harwood last week.

He’s the Billboard Owl, the second-winter male that’s been hugging the margins of I-29 north of Fargo, ND, rarely straying from the interstate or its frontage roads. We’ve been worried from the start about his choice of winter territory, and it appears that the danger caught up with him. On Friday evening, Feb. 15, his transmitter sent 50 or so GPS points that formed a depressing cluster along the edge of the northbound lanes just south of Argusville. First thing Saturday morning, bander Matt Solensky headed up and confirmed what we’d feared — Harwood, the bird he’d caught and tagged a month earlier, had been hit by a vehicle.

Harwood’s transmitter appeared undamaged, though we’ll have CTT check it out to be sure; we may be able to redeploy the unit at some point down the road. And as is the case whenever we lose an owl and are able to recover it, we’ll make arrangements for our veterinary team to examine Harwood, assessing his overall condition and, especially, what environmental contaminants he’d been exposed to.

As we’ve said before, it’s always tough to lose an owl, but with each unexpected death we build a better picture of the threat environment in which these owls live when they come south of the Arctic. Our tagging work has certainly shown that vehicular collisions are one of the biggest dangers they face. In that sense, Harwood will make as important a contribution in death as he did in life. 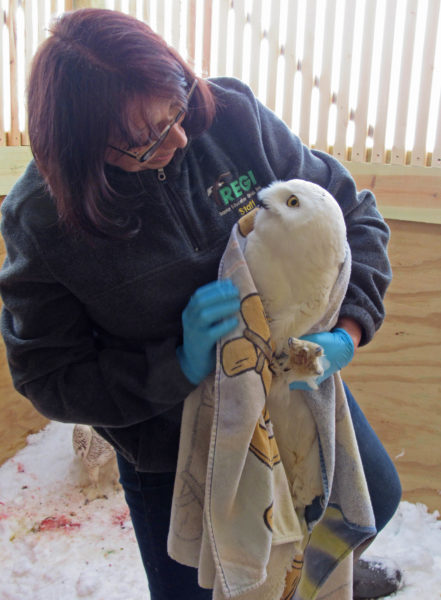 Marge Gibson with Coddington, heading into the clinic for his check-up. (©Raptor Education Group Inc.)

–Let’s shift to some good news. Marge Gibson at the Raptor Education Group in Wisconsin tells us that Coddington, the owl that wound up mucked in manure in a dairy barn last month, has fully recovered and will be released in the near future. He’s gained back his lost weight, and the down feathers that were damaged by the manure (which can be caustic) have replaced themselves with surprising speed. A second snowy, a female, that also came in drenched in manure from another farm is also ready for release.

Marge mentioned that during the record “polar vortex” cold a couple of weeks ago, when wind chills were below -60F, she noticed a marked behavioral difference between raptors that breed in Wisconsin, and their Arctic patients like snowy owls and rough-legged hawks.

“Raptors native to our area are less active and slow down on food intake during harsh temperatures. It is a period of low metabolism, an adaptation to conserve energy,” she said. “The Arctic birds never slowed down, in fact they all increased their intake. The SNOW all ate at least two 350- to 400-gram gophers per day during this period. [Rough-legged hawks] ate one full gopher and extra beef heart as well.  It was really interesting.” (Read more from Marge here.) 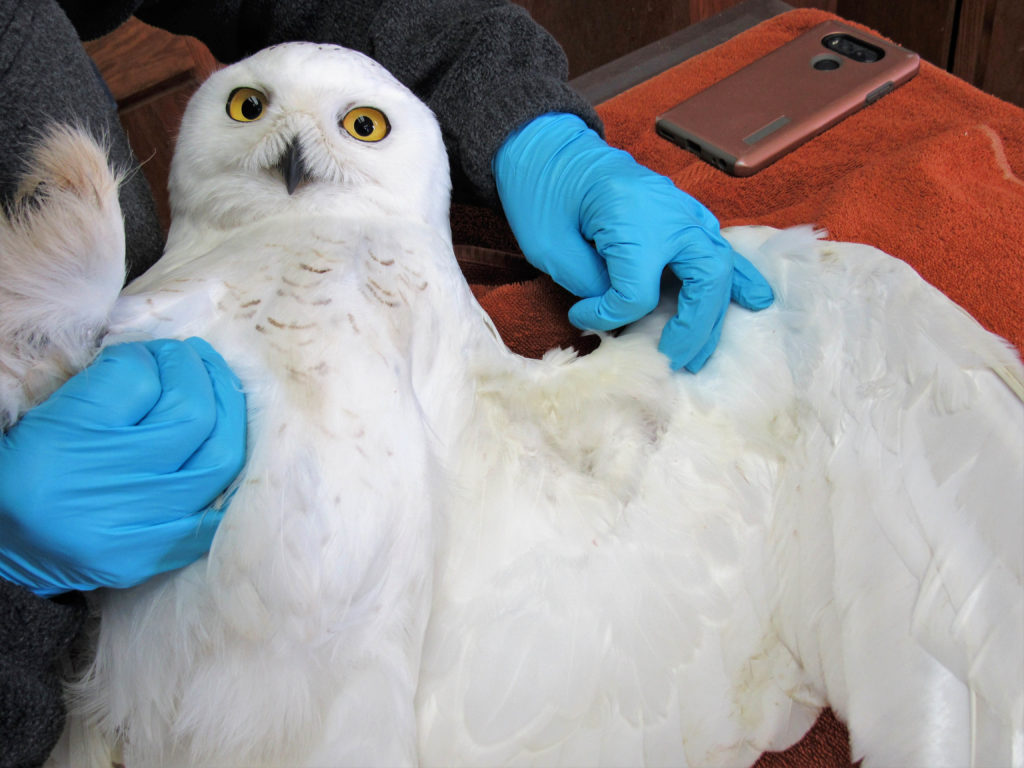 Fluffy and good as new: Coddington’s feather damage and skin irritation from the manure exposure have healed, as has a bruised wing. (©Raptor Education Group Inc.) 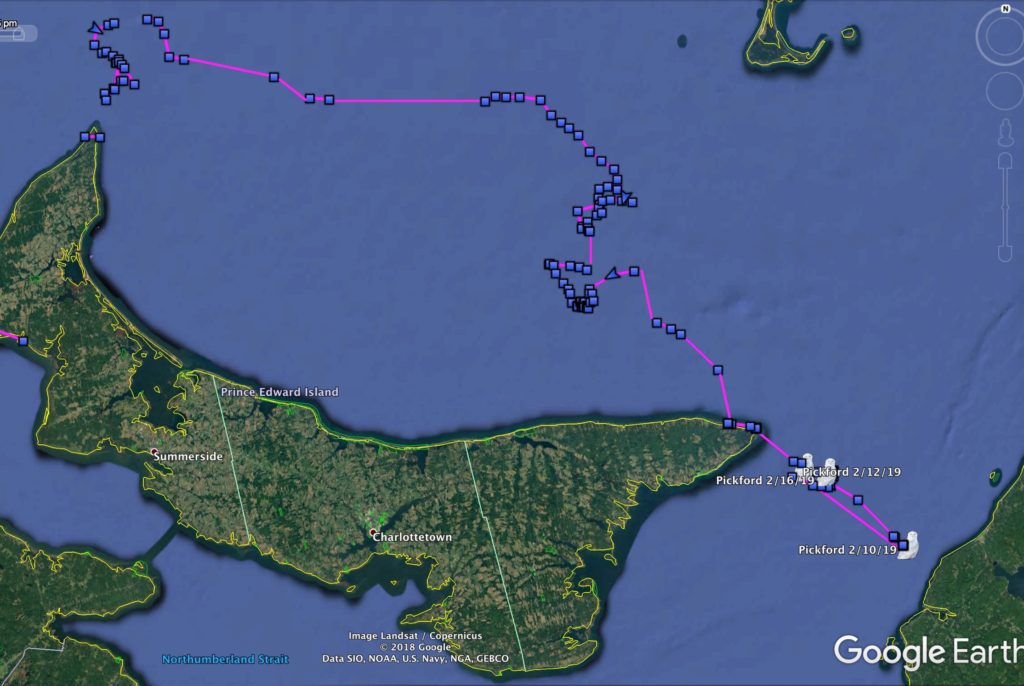 An owl on ice is usually a happy owl, and Pickford has been spending a lot of time on sea ice off Prince Edward Island. (©Project SNOWstorm and Google Earth)

–On the owl movement front, Pickford had been out of touch for a while, but reconnected starting Feb. 10, when we learned that she had been out on the sea ice north of Prince Edward Island, then moved almost to Cape Breton Island before drifting back west again. Feb. 16 she was about halfway between East Point on PEI and Sight Point on Cape Breton.

Island Beach remains east of Montreal, near McMasterville, QC, but down in New York, Otter moved offshore on the ice that has formed up around the eastern toe of Lake Ontario, then up to Wolfe Island on the Canadian side of the border. Although we were not able to tag any snowies on neighboring Amherst Island to continue our study of how the presence of wind turbines might affect snowy owl movements, Otter was helping the cause during the 12 hours or so she was on Wolfe, which has 86 turbines on its flat expanse. (By Feb. 14, Otter was back on Cape Vincent again.) 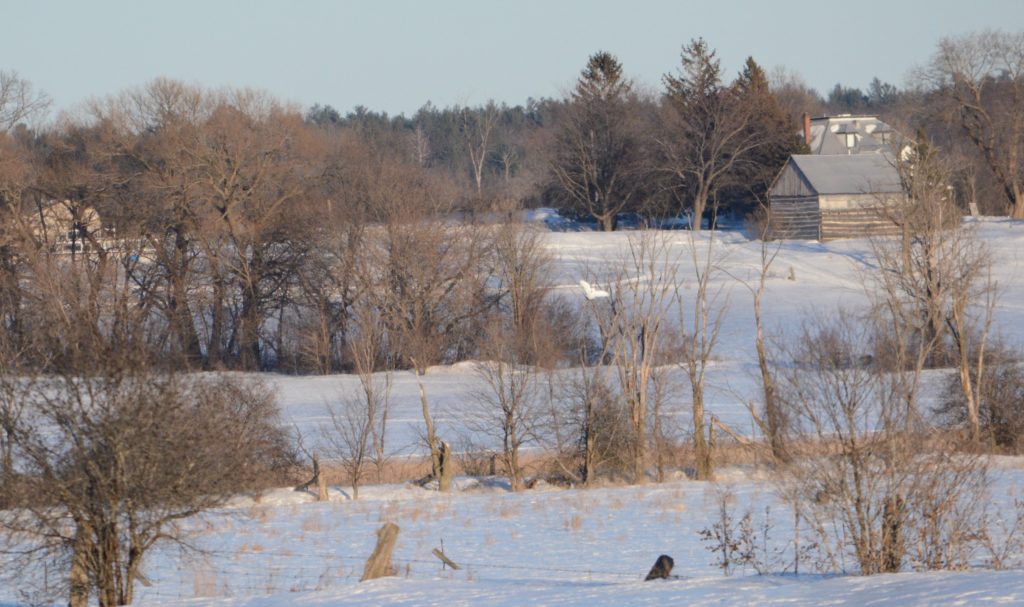 He’s there, and so is his transmitter — Hardscrabble and that tiny little spot of black that lets the LaFortunes keep track of him (©Daniel LaFortune)

Although his transmitter no longer works, we’ve been able to keep track of Hardscrabble this winter and last when he returns to his now-traditional winter haunts near Arnprior, ON, thanks to our dedicated friends Pat and Dan LaFortune. They were able to relocate Hardscrabble there on Feb. 10, and sent us a photo — if you look *really* carefully you can see Hardscrabble’s transmitter, the black dot of the solar panel.

Plainfield is still staying in the ag fields of central Wisconsin, close to where Coddington got himself in trouble — but fortunately, she is steering clear of dairy barns and manure. Argus, who had dipped down into Iowa for a few days, is back up in extreme southwestern Minnesota, on the Nobles/Murray county line, about 50 miles (80 km) northeast of Sioux Falls. And Woodworth has crossed back into Canada, just a couple of kilometers from the U.S. border near Waskada, Manitoba. And Pettibone seems content on his territory near Aylesbury, SK, where he’s been hunting since mid-January.

–Although there haven’t been a lot of owls in the mid-Atlantic this season, there have been some, and Steve Huy has been out frequently trying to tag a bird on the Chesapeake or Delaware bays, to complement our Atlantic coastal dataset. Recently he was able to assist base personnel by trapping and relocating a female snowy owl at Naval Air Station Patuxent River, Maryland, on the western shore of the Chesapeake. Because the owl was small for a female, and a bit thinner than normal, Steve banded her but opted not to give her a transmitter — we prefer to be conservative about which owls we tag. (The unit would have been one sponsored by the Delmarva Ornithological Society, which has supported our work several times in the past, and for which we are grateful.)