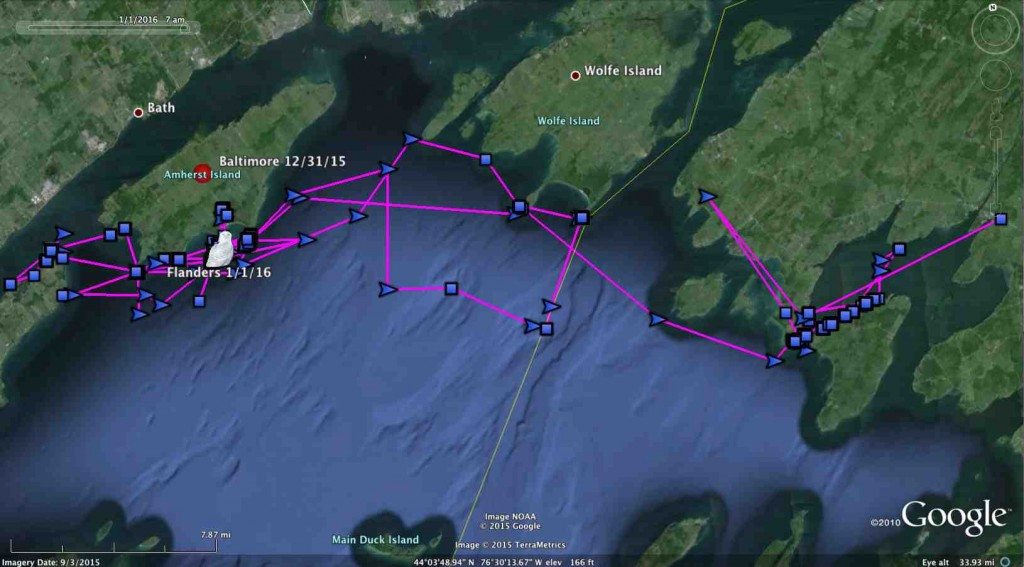 Flanders’ movements from Dec. 8 through Jan. 1, and Baltimore’s location at dusk on Dec. 31. (©Project SNOWstorm and Google Earth)

Some snowy owls are homebodies, some have wanderlust. After Tom McDonald tagged Flanders on Dec. 8 near Cape Vincent, New York, it looked like this adult female might be the latter, but since Dec. 12 she’s settled in on Amherst Island, Ontario — one of the more famous owl hotspots in the East.

In recent weeks birders have been reporting eight or nine snowy owls on Amherst, at the northeastern end of Lake Ontario. One of them is Baltimore, our returning adult male that was first banded in 2014 in Maryland, and tagged there last winter when he came back.

While Baltimore has been using the large fields in the center of the island, Flanders has been hanging out along the southern shore of Amherst, roosting mostly on Nut Island, which lies .3 km (.5 miles) offshore.

She’s made some forays to the main island, mostly after dark, as well as to Prince Edward Point 20 km (6 miles) to the west, and Wolfe Island 16 km (10 miles) to the east — and a lot of nocturnal flights out over the lake, which is still ice-free and presumably a good hunting ground for waterfowl.

But that ice-free situation has a down side for us, because the cold winds flowing across the relatively warm lake generate clouds and lake-effect precipitation. That creates a challenge for the solar-powered transmitters on both Flanders and Baltimore, which haven’t had a sunny day in weeks. Fortunately, the forecast is for some major breaks in the clouds in the days ahead.

Farewell to a Friend
Baltimore Returns