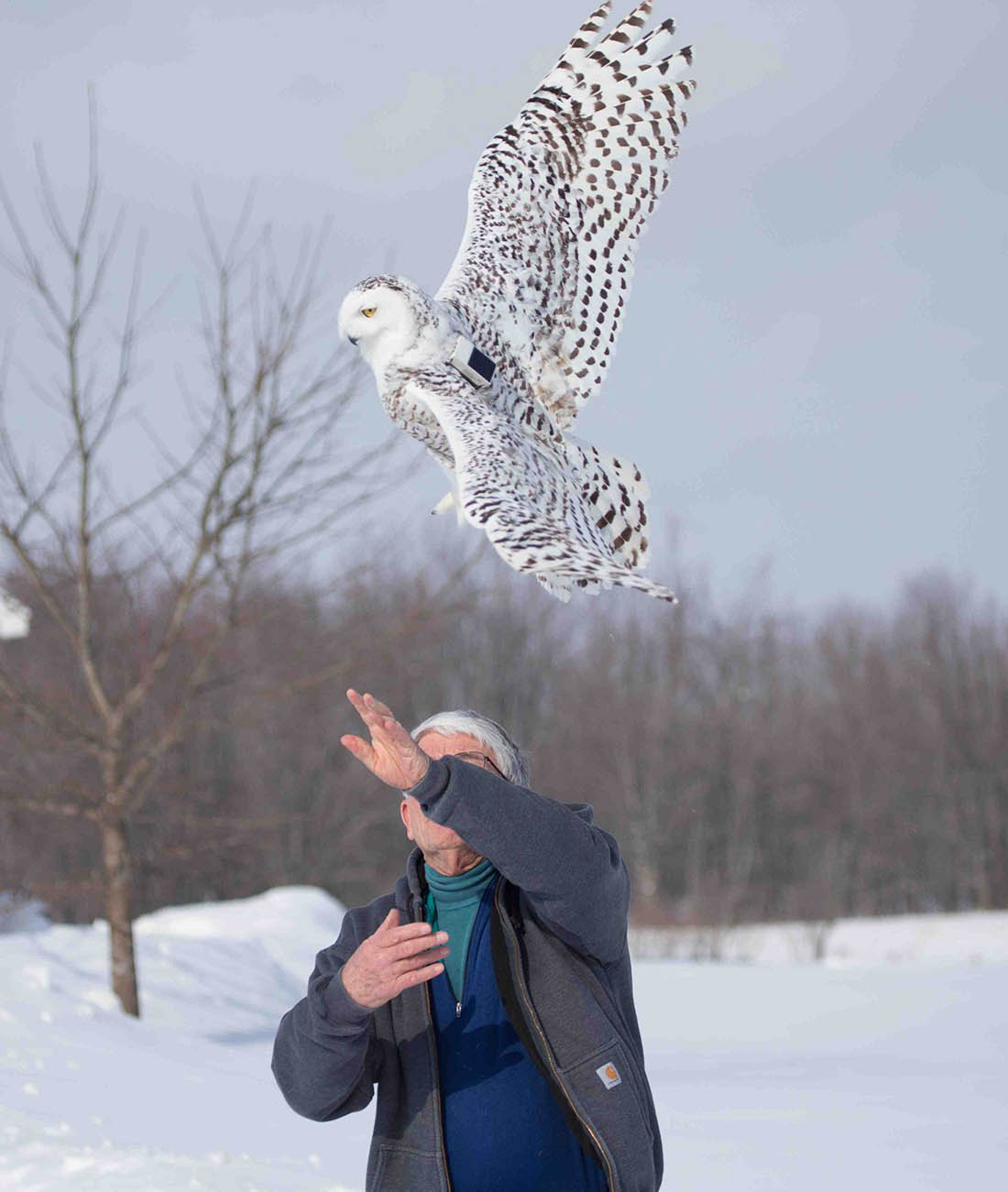 Anthony Hill gives Orleans a toss, her new transmitter harnessed snugly to her back. (©Aaron Winters)

There’s been a lot going on at Project SNOWstorm, despite the lack of recent updates. Our core group got hit with travel (and travel delays), illnesses and a few other unavoidable hiccups that kept us occupied the past week or two, but we’re ready to catch everyone up with what’s going on.

The biggest news is that we have two new tagged SNOWstorm owls, both in upstate New York — Geneseo and Orleans, trapped by the ever-busy Tom McDonald of Rochester on Feb. 21 and 22, respectively.

Tom has been studying snowy owls in New York for two and half decades, and because of that long experience, his insights into snowy owl behavior are all but unmatched. We thought you’d like to hear more about what goes into catching these spectacular raptors.

“If I have learned anything about snowy owls in the last 25 years,” Tom said, “it’s the fact that they are the Marcel Marceaus of the bird world.”

“No other raptor on the planet is more expressive and ‘talkative’ than a snowy. In their own unique way, they will tell you if they are agitated by something, as well as what is bothering them. They will let you know if your trap presentation is enticing or whether it represents nothing more than entertainment value — something to pass the boredom.”

Tom had watched both owls extensively before trying to trap them, and their individual personalities played a big role in how and when he decided to try to catch them. 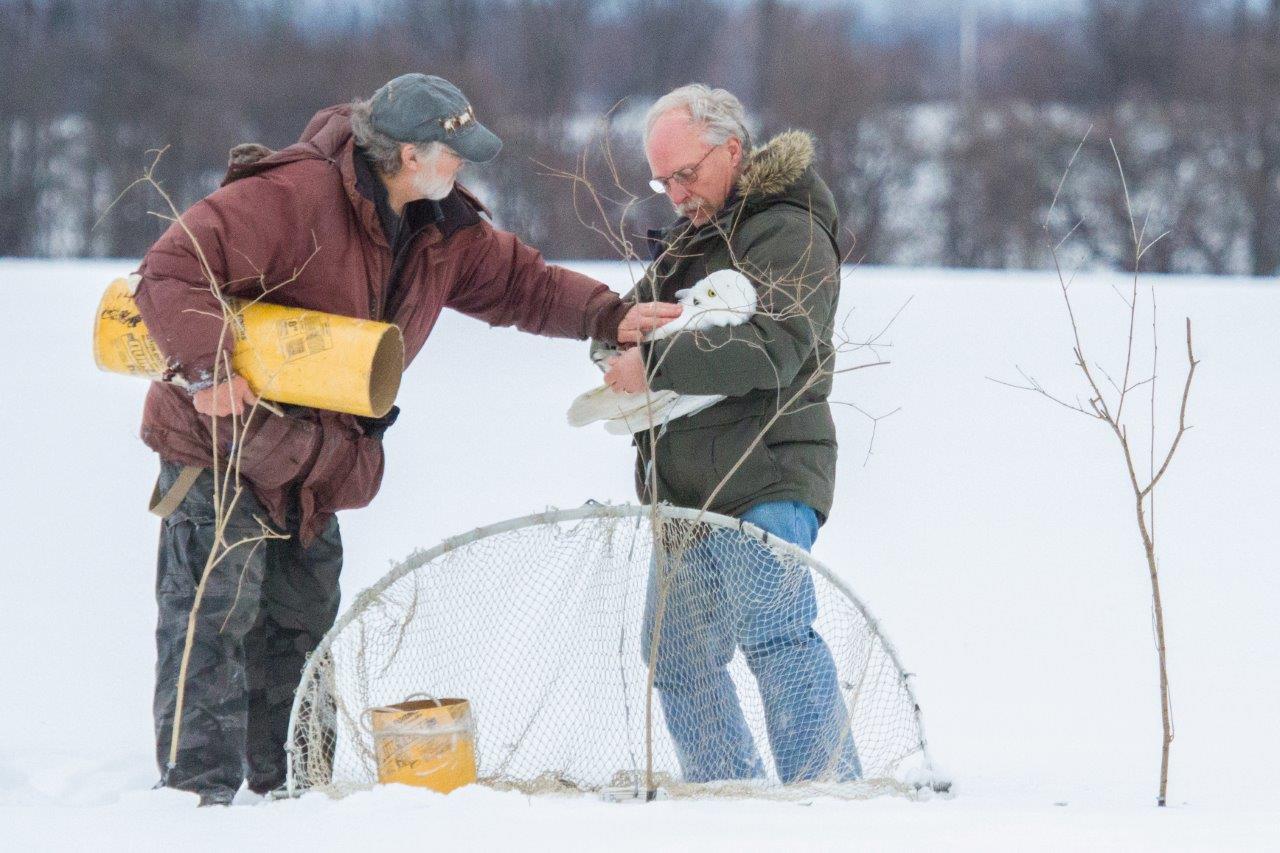 Geneseo has been wintering in Livingston County, New York, about 25 miles (40 km) southwest of Rochester. “Geneseo is an extremely aggressive adult male (they typically defend nesting and wintering territories vigorously) and I watched him chase another adult male literally out of the county in the early hours of darkness the day before I trapped him,” Tom said.

Most snowy owls look for a high perch in the final hours before sunrise, watching for a last meal before crows, hawks and other annoyances start their day.

“Geneseo was different,” Tom said. “He was roosting on the ground early on the morning that I captured him, but was still in charge of his surroundings, standing at attention in his favorite spot 400 yards [365 m] out in an open farm field.” 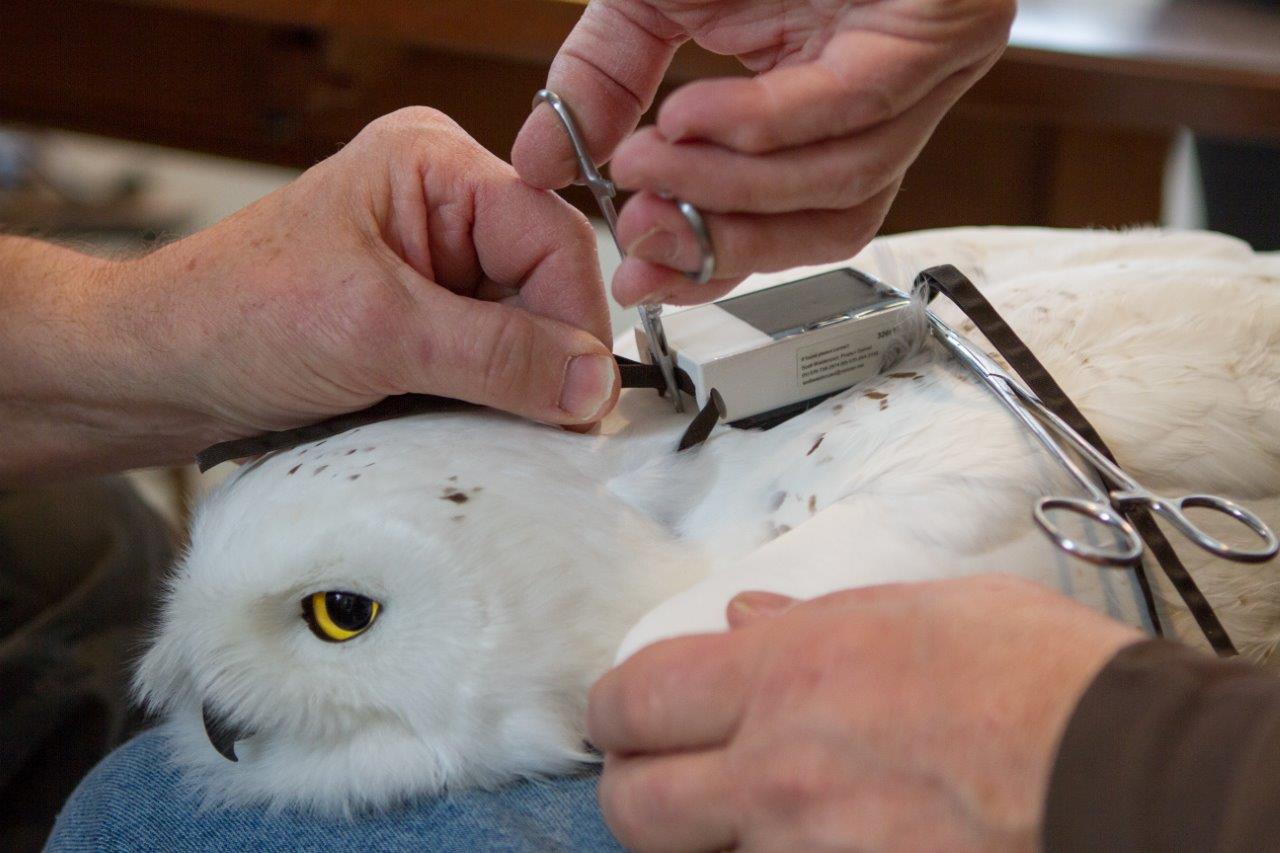 “My experience with aggressive individuals has shown that even if the owl has had a successful night hunting, he will pursue enticing prey just to keep other predators from having it,” Tom said.

And that was the case with Geneseo, which Tom caught less than 15 minutes after setting up his rig. “If I had not had the opportunity to study him the night before, I would not have set up on an owl so far out in the field,” he said.

Trapping snowy owls is obviously an outdoor activity, but given the numbing cold this winter, the meticulous tagging process is best done indoors. Tom harnessed Geneseo’s transmitter at the home of Joe Stevenson, and joining the group were Joe’s friend Carly; Daena Ford, president of our partner, Braddock Bay Raptor Research, along with her daughter Emily; photographer Laurie Dirkx; and bander and SNOWstorm collaborator David Mathiason. 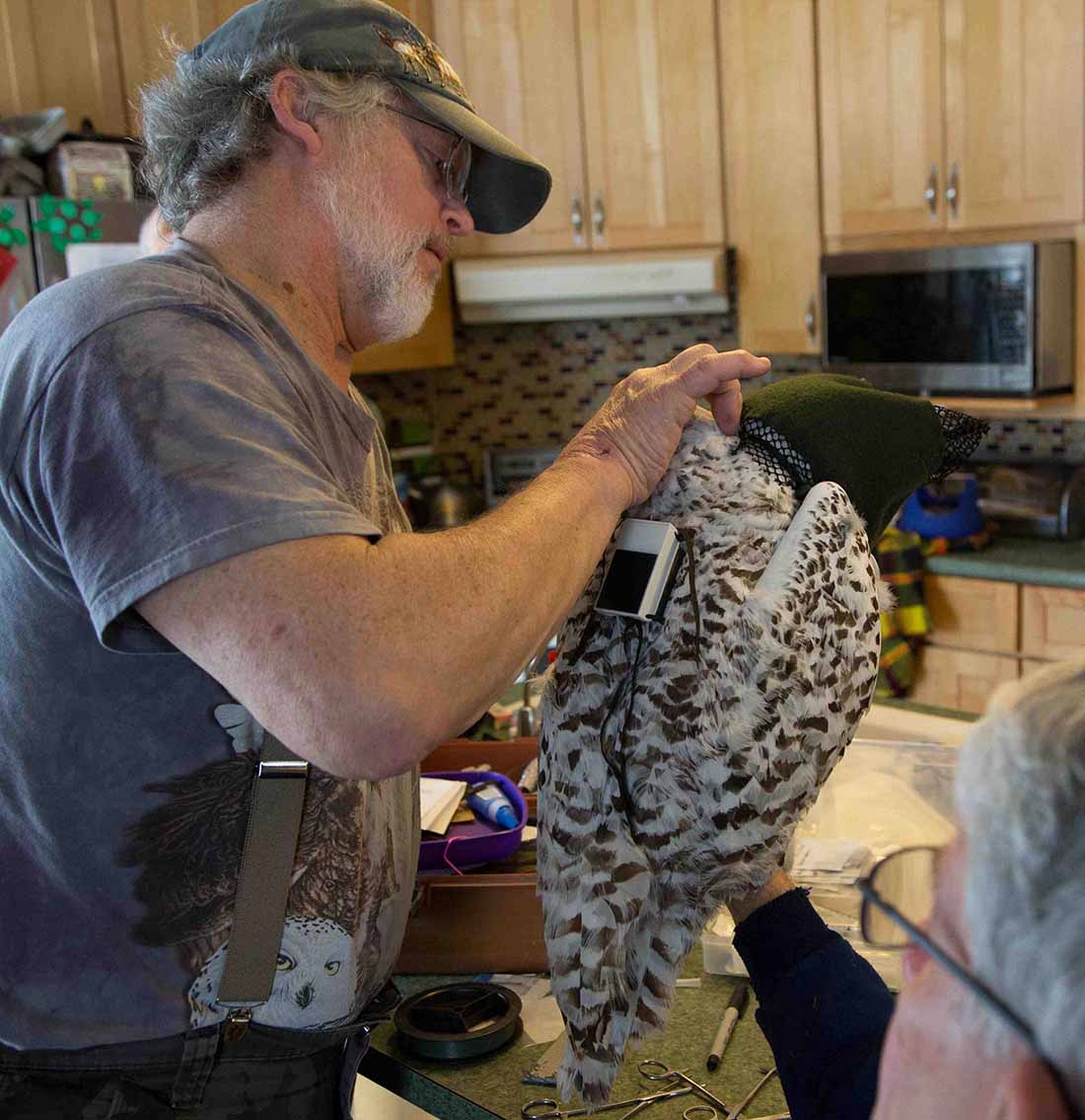 Orleans was caught the next day in Jefferson County, New York, up in the St. Lawrence River valley near the Thousand Islands area, and only about 15 miles (24 km) from where Tom tagged Chaumont earlier this winter.

Tom had first watched Orleans the previous week, when she had chased another snowy owl that Tom had just banded and released. This time she was perched high in an elm tree, and Tom carefully scanned to make sure there were no other snowy owls (or other raptors) around before he set his bownet for her.

“Ninety-nine times out of a hundred, the owl you are preparing to trap will tell you if there is another snowy in the area, and will also show you where it is,” he said. This time, the coast was clear.

Orleans, an after-second-year female, was also extremely aggressive. “True to her nature, she was coming in hard and fast while I was still introducing the lure,” he said. “Luckily, I was able to trudge through the deep snow fast enough to make it back to the car in time for my friend Anthony Hill to trip the bow trigger and capture her.”

(Anthony, an experienced bander from Massachusetts who works with hummingbirds, passerines, seabirds and northern saw-whet owls, is gaining experience this winter to work with snowies in New England in seasons to come.)

With Orleans in hand, Tom and Anthony took her a quarter-mile down the road to the home of Paul Timmerman — “Snowy Owl Central of LaFargeville,” Tom jokes, having banded at least three other local snowies there already this winter. “He and his wonderful family set a fine example for the hospitality and character of the many land owners and residents of the far northern reaches of New York state.” 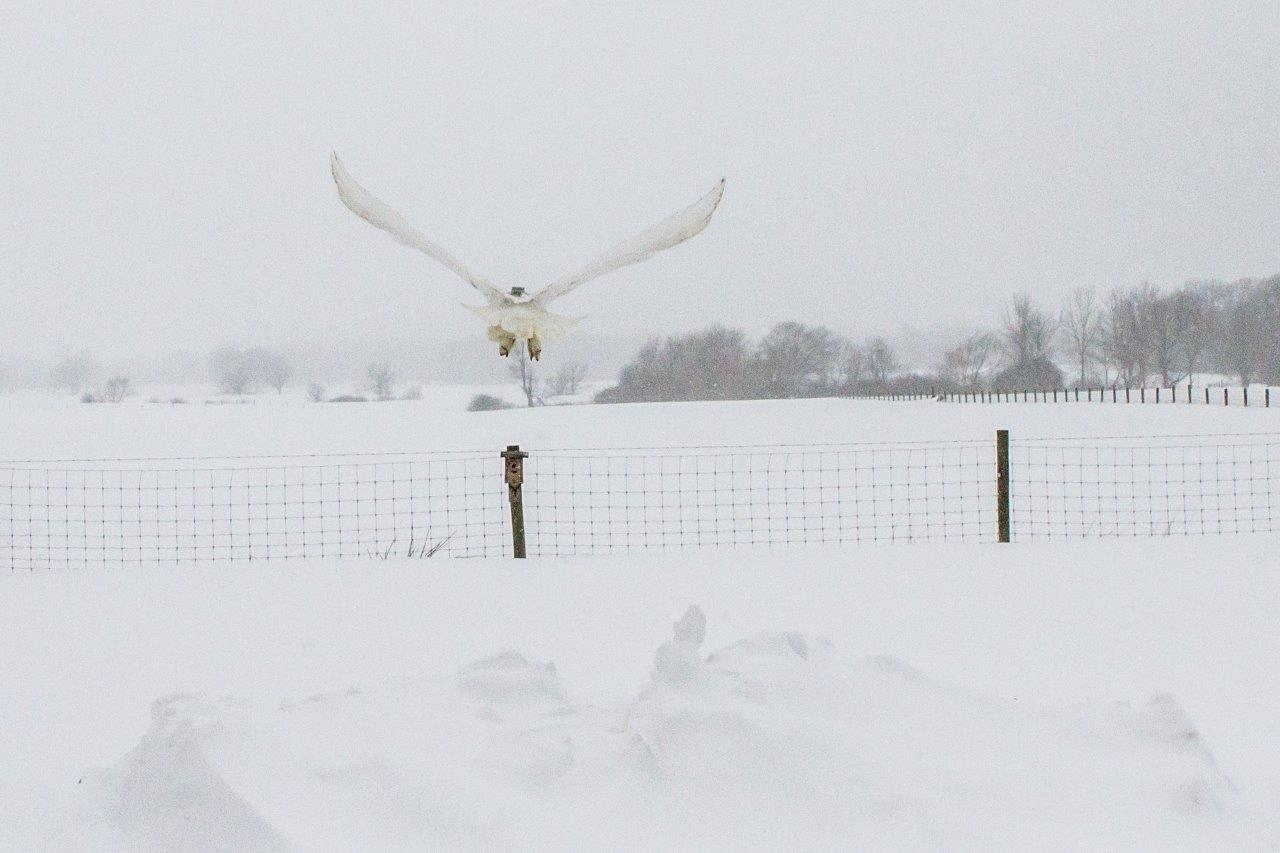 Geneseo heads back to the snowy fields of upstate New York with his new GPS/GSM transmitter already tracking his movements. (©Laurie Dirkx)

As Tom and Anthony fitted Orleans’s with her new transmitter, they were joined by Dr. Monica LeClerc, a local biology professor, and her husband Richard; falconer and raptor breeder Rick West; Rochester photographer Aaron Winters; and a number of other local folks interested in Tom’s work. The group decided to name Orleans for the small, nearby community of Orleans Four Corners.

Since her release, Orleans has stayed in a fairly small area that straddles I-81, about 2 miles by three-quarters of a mile (3 km by 2 km). It’s an area of wide, flat farmland that abuts large patches of hardwood forest.
Geneseo has moved around more in the farmland he’s been calling home, making flights of up to 7.5 miles (12 km) south and southwest, almost into adjacent Wyoming County.

As always, you can follow their movements on Geneseo’s and Orleans’s interactive maps — and we’ll have an update on our other tagged owls (who are doing some cool things of their own) very soon.