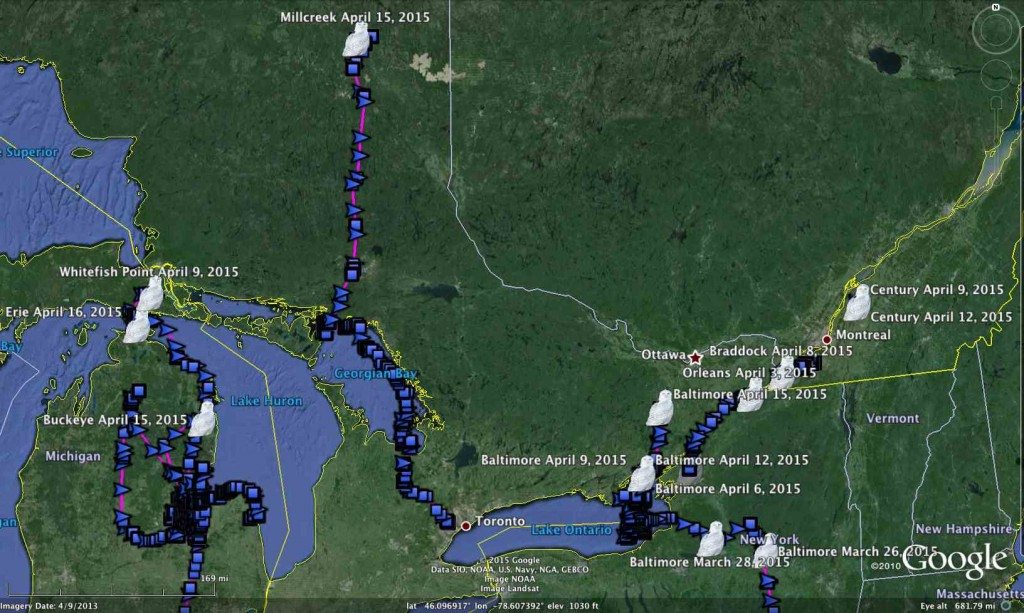 The race to the Arctic is on, and Millcreek isn’t wasting any time — one of several big developments this week. (©Project SNOWstorm and Google Earth)

Although it’s been more than a week since the last post, we’ve been really busy — and so have the owls, which is why this is a long post. We’re seeing some spectacular spring flights, and hearing from owls that have been off the grid for a while.

And the grid — that is, the extent of the GSM cellular network, on which our transmitters depend — takes on particular importance at this time of the year.

You’ll recall that while the transmitters continually record GPS locations from the orbiting satellites that guide your smartphone and automotive navigational system, and can do so from anywhere in the world, they send those data to us over the cell network. That’s why when the owls are off on Great Lake ice sheets, or tucked in a cellular dead zone on a coastal barrier island, we sometimes don’t hear from them.

That cell network thins out dramatically just a few hundred miles north of the U.S.-Canadian border — and in some places even farther south than that, as this map of Canadian cell towers shows.

The overall cell network in southern Canada. The size of map icons badly overstates the coverage at this scale, and not all of the systems here use GSM technology, which our transmitters rely on. (Map by http://www.ertyu.org/steven_nikkel/cancellsites.html)

There’s a tight network in southern Ontario, but once you get above about 46 degrees north latitude, the towers are few and far between — and not all of those are GSM, through which our transmitters communicate. Things are especially thin north of Lake Superior.

So you can appreciate that it doesn’t take a lot of flying for our tagged birds to get beyond the grid. One way we try to maximize our chance of getting the last bit of data before they go dark is by switching the units from weekly transmissions to three-day check-ins, which we did a couple of weeks ago.

It may already have been too late for a couple of birds. Reedsville, for instance, was on Lake Poygan in central Wisconsin on March 12 — and then she was gone. Her unit, which had a really strong battery charge, was still on a weekly cycle, and in seven nights she could easily have flown the 330 miles (530 km) or so that it would have taken to get beyond the cell net. Some owls can do that in a couple of nights.

Last spring, for example, Century vanished in southeastern New York in mid-April. She was so far south — more than 250 miles (403 km) below the edge of the cell system — that we assumed there must have been a transmitter problem. But when she came back south this winter and uploaded her stored data, we learned that she had just made a very rapid flight north into Quebec, and beyond the grid.

On the other hand, frequent checks can drain the solar charge more easily, especially if the bird’s behavior (like facing the sun all day) makes recharging hard. Goose Pond, who had been close to the Iowa border March 29, went dark two weeks ago after a closely spaced series of checks, including the monthly “safety” check that occurs regardless of the schedule. I suspect his unit may just be hanging just below the transmission threshold, but should still be collecting data.

OK, so what’s been going on? Starting from the east, we haven’t heard from Orleans for about two weeks, since she stirred herself from her niche just south of the Ontario-New York border and flew northeast down the St. Lawrence River. Best guess is that she subsequently moved north of the river, where the cell network only extends about 50 km (30 miles) in some areas.

Century, on the other hand, was still in her winter spot east of Saint-Roche-de-Richelieu, Quebec, also along the St. Lawrence. And upriver about 128 km (80 miles), Braddock was moving up and down the St. Lawrence as of April 8 near Salaberry-de-Valleyfield, seemingly unsure which way to go.

Baltimore, who made a dramatic flight north from the New Jersey coast to Lake Ontario, remained near Amherst Island until the wee hours of April 14-15, then started drifting down the St. Lawrence on ice, moving half a mile an hour (.6 km/hr) to Kingston, Ontario. Then he left the river and flew north 75 km (46 miles) to Perth, where he was on April 15 when his unit checked in.

Buckeye had been clinging to the fast-vanishing ice on Saginaw Bay in Lake Huron, but the Midwestern thaw finally did away with the last of that in the past week, and she was forced to land in Arenac County, Michigan, on April 13. Then she flew north to Hubbard Lake, in Alcona County — until the ice melted there, too, judging by her shift to land on the evening of April 15, when she checked in. 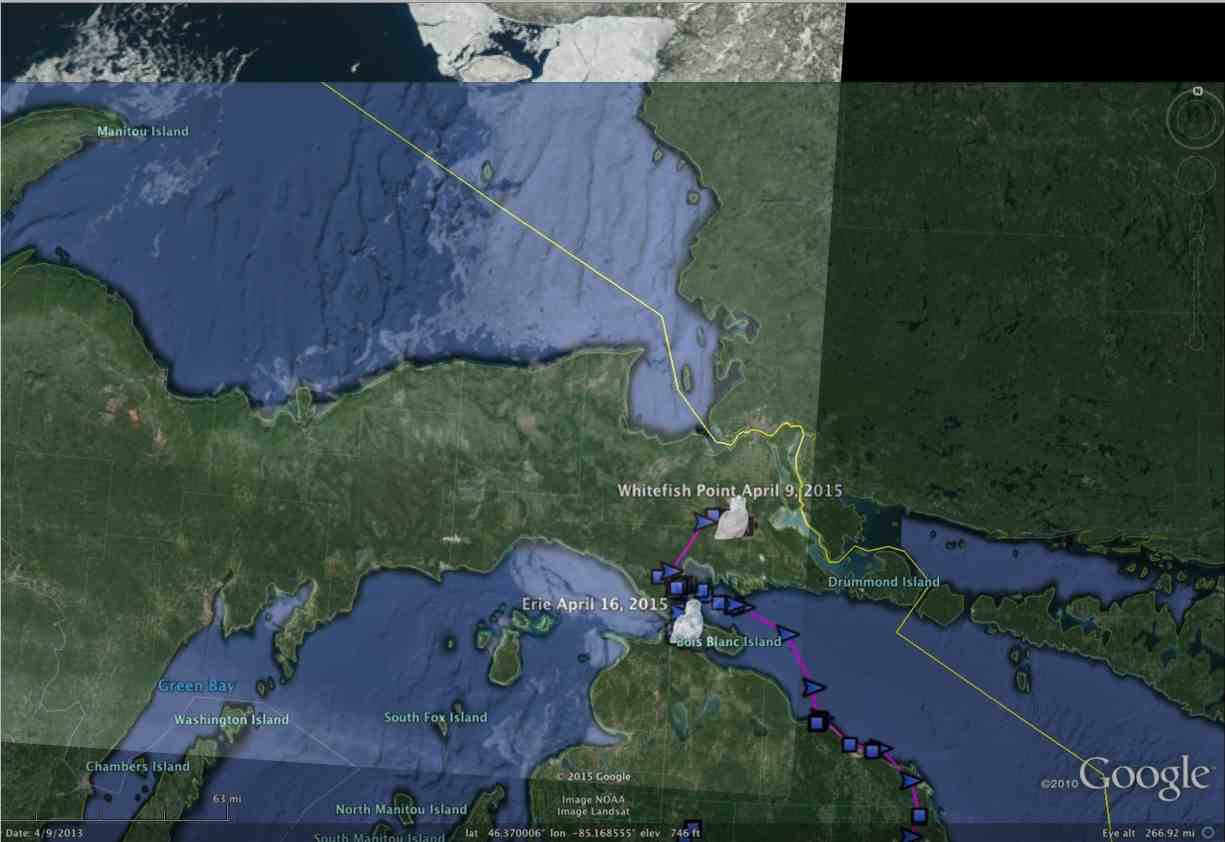 Overlay image showing ice cover April 15 on lakes Michigan and Superior – almost gone on the former, but still an immense area on Superior. Is that where Whitefish Point and Chipppewa are? (©Project SNOWstorm and Google Earth)

The last time we heard from Chippewa was April 6, and her neighbor, Whitefish Point, last checked in on April 9, both in the UP of Michigan. They’d both been moving around a fair bit, and the north end of Lake Michigan, and east end of Lake Superior — both of which are a short flight from where they’d been — are among the only parts of the Great Lakes still with large expanses of ice.

We may hear from these girls again before the season is over, but maybe not. The area just north of the UP is one of the big holes in borderland Canadian cell coverage, and they’d only have to fly about 50 miles (80 km) to get past the last towers, as you can see here:

There’s not much cell coverage beyond the UP – the red dot is Whitefish Point and Chippewa’s winter location. (Cell map by http://www.ertyu.org/steven_nikkel/cancellsites.html)

The two most exciting developments are checks from two more of our 2014 owls, Millcreek and Erie, which were neighbors last winter, both caught at the same airport in Erie, PA.

Erie was last heard from on March 20, in Sanilac County, Michigan, and I was starting to think he’d bolted north for the season. But this week he checked in with almost 1,500 GPS locations, having skirted the edge of Lake Huron to Saginaw Bay, where he was crisscrossing paths with Buckeye in late March. 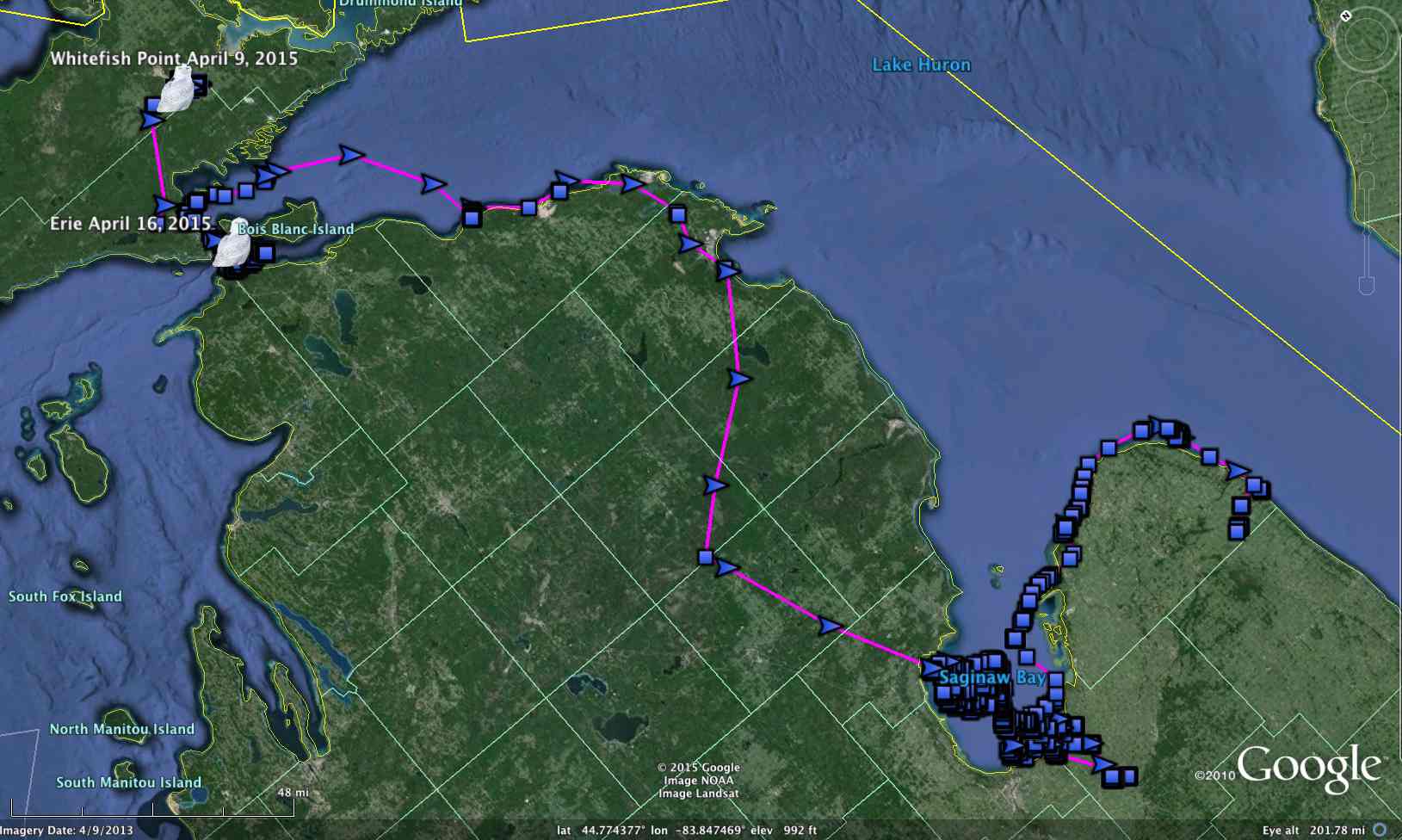 Erie’s movements over the past month. (The map is turned, and north is to the upper left.) (©Project SNOWstorm and Google Earth)

April 5 Erie flew north, inland through the northern Lower Peninsula and out onto extreme western Lake Huron, just east of the Straits of Mackinac, and within sight of the Mackinac Bridge. That’s where he was when he checked in on April 16.

But the prize for most exciting flight goes to Millcreek. He’d been so steady and predictable all winter, never budging since early December from his horseshoe-shaped winter territory in the Toronto suburbs, that when he vanished a couple weeks ago it was shocking. Often owls show some restlessness before they start to migrate, but not him.

Millcreek’s quick visit to the mine tailings ponds in Sudbury, ON — probably just as well he didn’t linger. (The exhaust plume from the town’s infamous Inco Superstack, the tallest chimney in the western hemisphere at the world’s largest nickel smelter, is visible near the middle right of the image.) (©Project SNOWstorm and Google Earth)

Instead, he launched himself northwest, up the icy expanse of Georgian Bay, at the north end of which he lingered for four or five days. The night of April 11-12 he moved north again, stopping (only briefly, fortunately) on the mine tailing lakes outside Sudbury, Ontario, thence on past the town of Timmins to Night Hawk Lake, and finally still farther north through the deepening boreal forest.

The town of Cochrane must have looked like an oasis of open land in the eternity of alien, hostile spruce/birch forest, because Millcreek bee-lined in — and lucky for us that he did. Cochrane is just about the last spot in that part of the world where you can find a cell signal — the last line of towers between there and the Arctic runs along the Trans-Canada Highway…and Millcreek, bless his cooperative soul, was perched within 6 km (3.5 miles) of that tower.

Millcreek had flown 336 km (227 miles) in three days, and he’s taking a much more westerly path this year than he did last year, when he summered in the Ungava Peninsula of northern Quebec. If his current track holds, he’s heading up the west side of James Bay this year.

We may have to wait a while to find out, though. From where he is now, almost any movement north will put him out of touch. But as we’ve said many times, these transmitters can store up to 12 years’ worth of data — so even if Millcreek stays north for a few years, we can still hope to get his backlogged data once he gets the urge to see the south again.

More news soon — there’s a lot else going on.

Alma and Monocacy
All Kinds of Shaking Going On