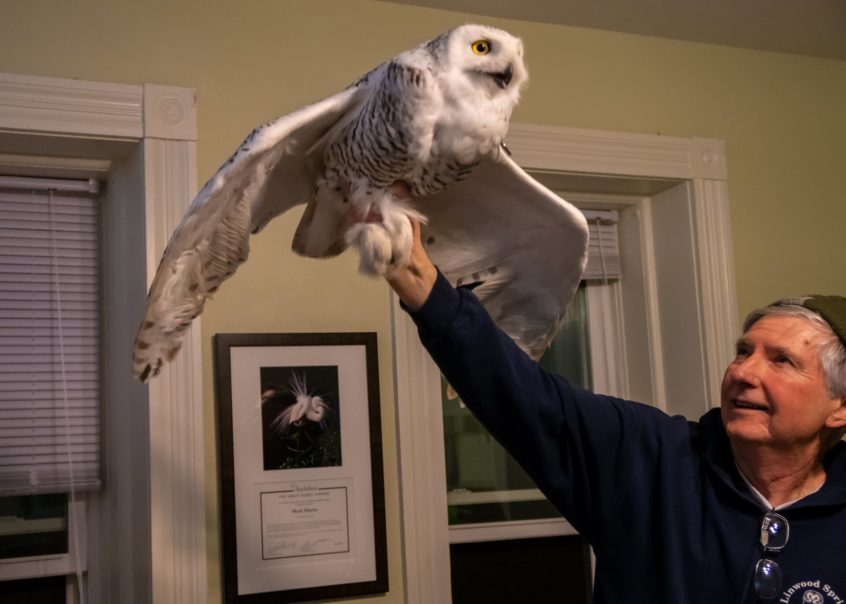 Ready to go — Columbia with Gene Jacobs at Goose Pond, after she was fitted with her transmitter. (©Monica Hall)

We’re happy to have a new owl on the grid in Wisconsin — Columbia, captured near Madison Audubon’s Goose Pond Sanctuary in Arlington, WI.

SNOWstorm collaborator Gene Jacobs has worked closely with the Madison Audubon folks since 2015, when he tagged an adult male we nicknamed Goose Pond, whose transmitter they sponsored. In 2018, again with the chapter’s support, he tagged Arlington, a juvenile male. Arlington was struck and killed by a vehicle that April while migrating north through Minnesota, and his refurbished transmitter was used last winter on Coddington, an adult male Gene tagged on the Buena Vista grasslands in central Wisconsin. Coddington, by bizarre bad luck, wound up mired in a manure lagoon, a fate that befell several owls that winter; although he was rescued, rehabbed and eventually released, his transmitter was removed. 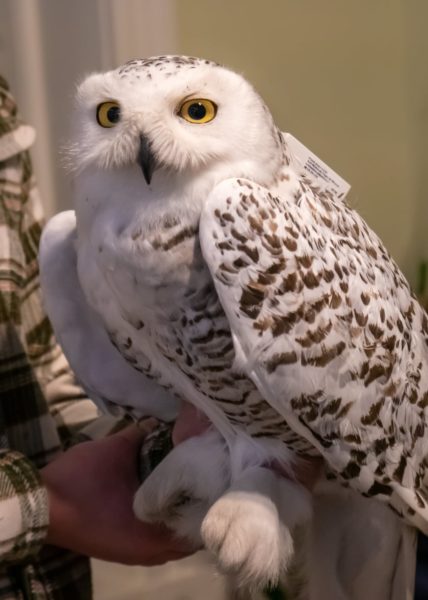 Columbia, a female, is classified as a third-year owl because she’s in her third calendar year — she was born in the summer of 2018. (©Monica Hall)

So after that string of bad luck, we have high hopes for Columbia, who was tagged by Gene on Jan. 28, after several weeks of trying. The first snowies showed up in the area in mid-December, including this female who, based on her wing feather molt, was hatched in the summer of 2018. After a number of weather delays from bad ice storms, the first trapping attempt took place Jan. 16, but the only snowy owl found, at the Dane County Regional Airport in Madison, was unresponsive.

During the days leading up to a second trapping attempt, snowy owls were seen both near Goose Pond and at the airport. The morning of the 28th a number of volunteer scouts fanned out across the area, looking for snowies, but came up dry. The one exception was, again, an owl at the airport — but because Vice President Mike Pence was in town, that one was off limits.

Fortunately, late in the day a female was found near Goose Pond, and Gene set up for her. At dusk, the snowy came in for the caged lure birds and was caught. Comparing her barring pattern to excellent photos taken over previous months, it’s the same snowy that first showed up Dec. 11. 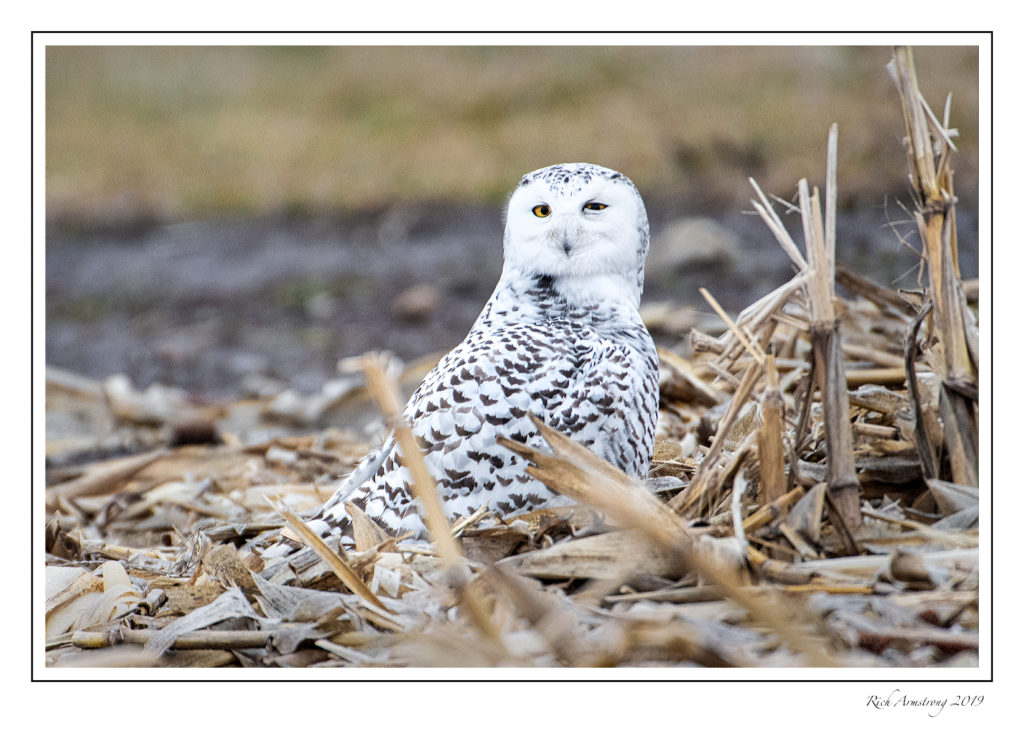 Columbia — named for the county where she was tagged — weighed a very healthy 5.25 pounds (2,390 g). Since her release she’s been moving back and forth along a 9.5-mile (15 km) track from Goose Pond to east of Deforest, WI, around the towns of Arlington, Morrisville and Leeds, bumping up against some of the subdivisions north of Madison. Mark Martin and Sue Foote-Martin, the resident managers at Goose Pond, say it looks as though she’s hunting large alfalfa fields, including one 160-acre (65 ha) field that in 2015 held five snowy owls. 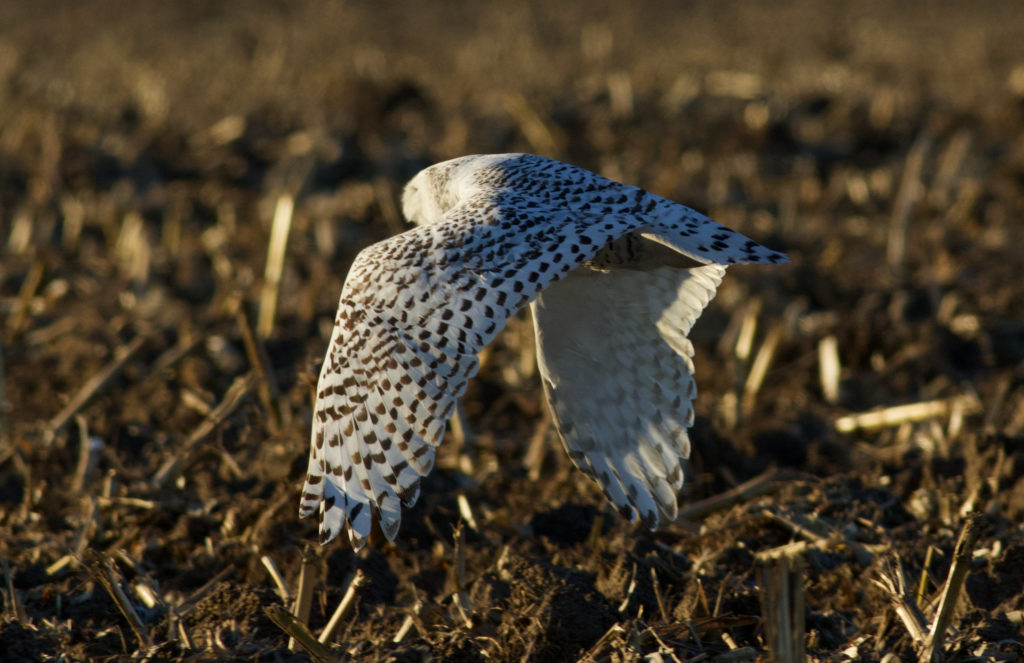 Small, unique details in the barring pattern of her feathers allowed Gene and other experts to conclude that Columbia is the same owl that’s been photographed (as here) near Goose Pond since last December. (© Arlene Koziol)

Columbia’s map is posted and being updated regularly — have fun tracking her movements, and thanks again to Madison Audubon for their continued support. (You can read their lively report of the whole episode here.) 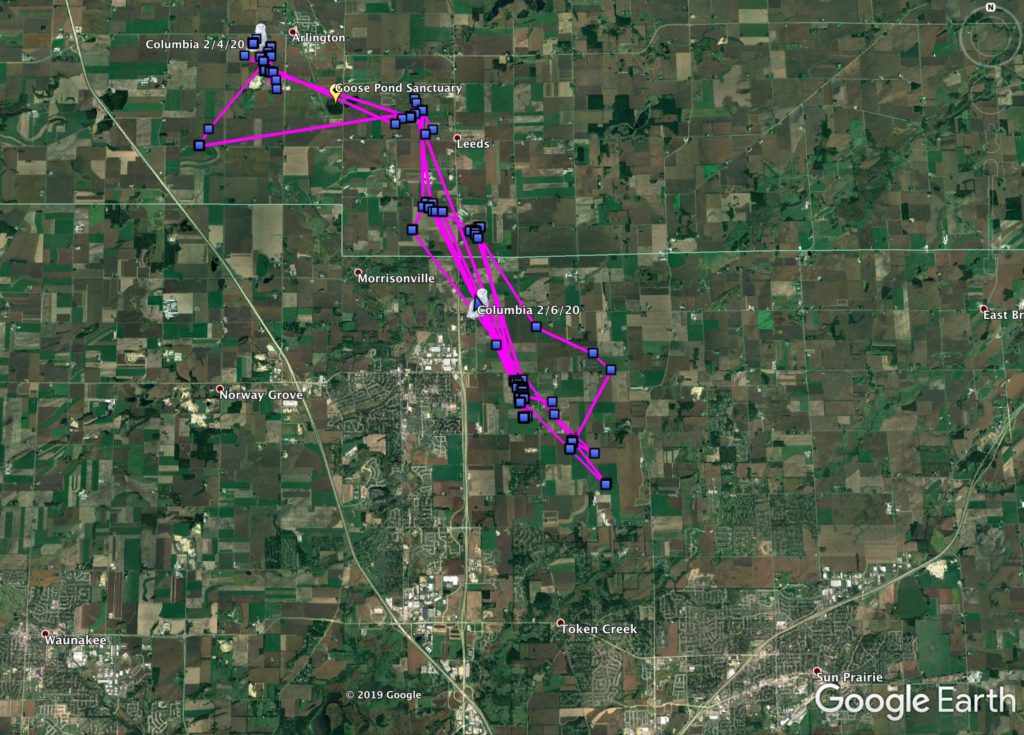 Since her release, Columbia has been hunting large alfalfa fields north of Madison. (©Project SNOWstorm and Google Earth)

Zugunruhe to You, Too!
Good News Across the Board