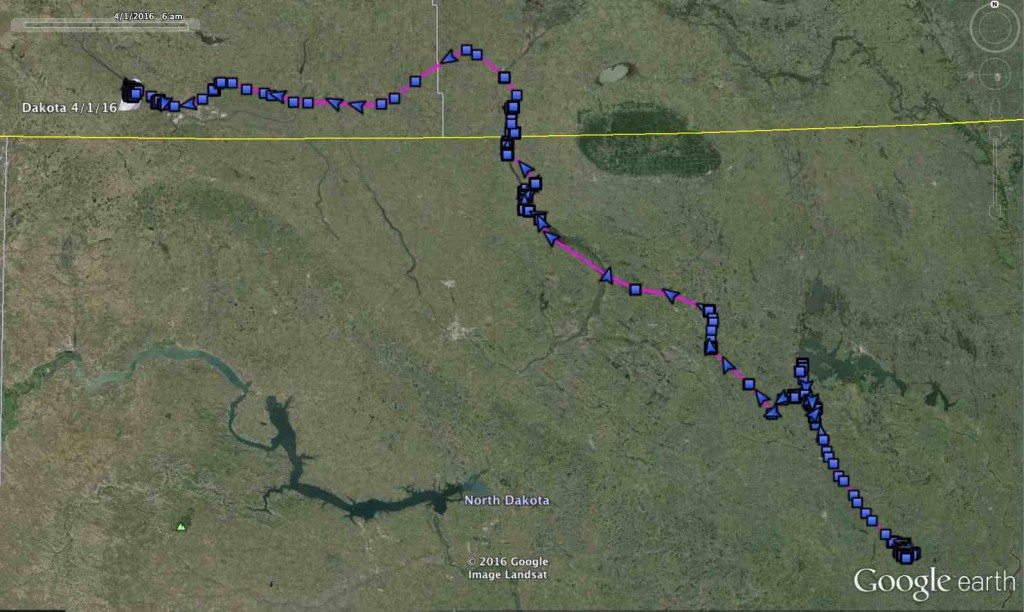 Across North Dakota, a corner of Manitoba and into southern Saskatchewan — Dakota’s movements over the past month or so. (©Project SNOWstorm and Google Earth)

Spring is always a time for surprises. Owls disappear, sometimes for weeks, only to reappear when they hit a pocket of cell coverage; others move in unexpected directions.

That was the case this week, when one bird that’s been off the grid for nearly a month showed up again. One pushed hard north, another went south and wound up where she’d started, and our most reliable snowy was suddenly nowhere to be found. Still another owl traded one dangerous situation for another.

The nicest surprise was a reappearance by Dakota, who last checked in March 2 on her winter territory in eastern North Dakota. Knowing how sparse the Canadian cell network is just north of the border, it was very possible she’d flown right through and beyond it between her weekly check-ins, but Thursday night Dakota phoned home, and downloaded more than 1,300 GPS locations.

Mid-March, it turns out, Dakota had begun moving northwest, angling to Devil’s Lake, at some 200,000 acres the largest natural lake in North Dakota. She didn’t stay long; by March 22 she was moving northwest again, passing Rugby, ND, and then turning north along the Souris River valley, and spending a couple of days in the 59,000-acre Clark Sayler National Wildlife Refuge, which includes much of the Souris just south of the Canadian border.

Dakota crossed into extreme southwestern Manitoba on March 26, and quickly hooked due west into southern Saskatchewan, rarely straying more than 16 km (10 miles) from the U.S. border, and still largely following the basin of the Souris River. Since March 28 she’s been on McDonald Lake, a huge impoundment on the Souris just west of Estevan, SK.

Considering how far north he already was, we were also pleasantly surprised to get a transmission from Hardscrabble, who is only about 200 km (125 miles) southeast of James Bay. Since his last transmission March 23, he’s moved about 124 km (77 miles), and is near Lac Matagami and the start of the James Bay Highway at the mining town of Matagami. 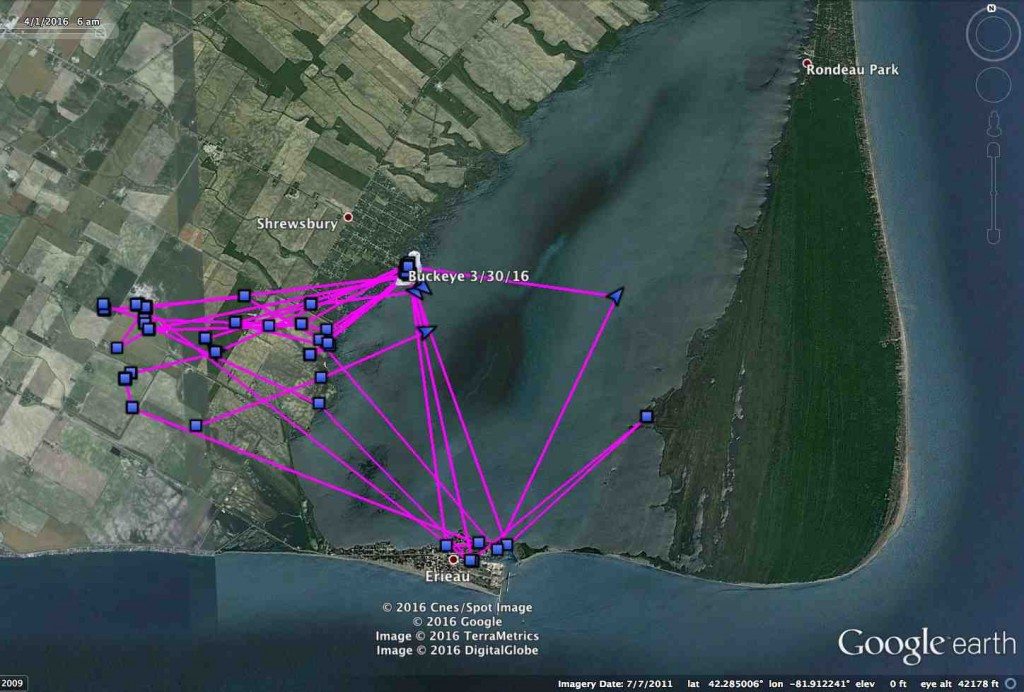 Buckeye has spent the past week on and around Rondeau Bay, in southern Ontario. (©Project SNOWstorm and Google Earth)

On the north shore of Lake Erie, Buckeye remained near the towns of Shrewsbury and Erieau, Ontario, moving between several large inland farms and the lakeshore — especially docks and marinas overlooking Rondeau Bay. Only occasionally has she flown out to the wild peninsula across the bay in Rondeau Provincial Park.

Notable by his absence this week was Baltimore, who since December has not budged from his small winter territory on Amherst Island, where he’s been as reliable as clockwork. He’s failed to check in since March 20, though, and because his transmitter had been humming along with a full solar charge, we can only assume he’s moved someplace (probably north) without cell coverage.

Likewise, Tibbetts — who had been along the Ottawa River just east of the city of Ottawa — also failed to check in, and has presumably moved north. 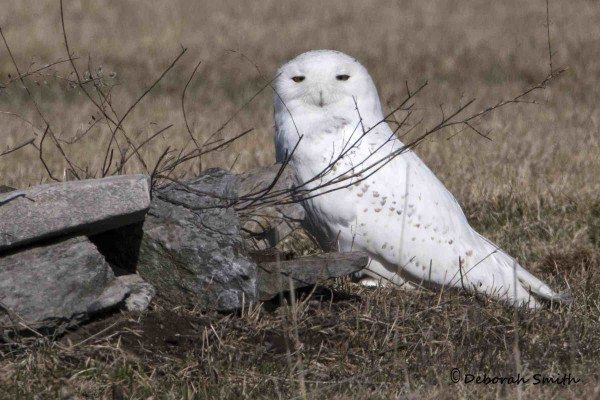 Our tagged owls may be gone, but there are still a few snowies hanging around Amherst Island, including this bird that Deborah Smith photographed there last week. (©Deborah Smith)

Consequently, this is the first time since back in December that we don’t have a transmittered owl on Amherst Island, where we had three or four tagged birds just a month ago. But there still are snowies on Amherst — Deborah Smith got some great photos last week of several lingering birds.

On the coast Merrimack, who had made a flight up into southern Maine to Sebago Lake before turning back to the coast, did a complete 180 last week and wound up right back where she’d started, at the mouth of the Merrimack River in northern Massachusetts. Thursday evening she was only a few miles north of Casco, who remains in Parker River NWR and Plum Island Sound. 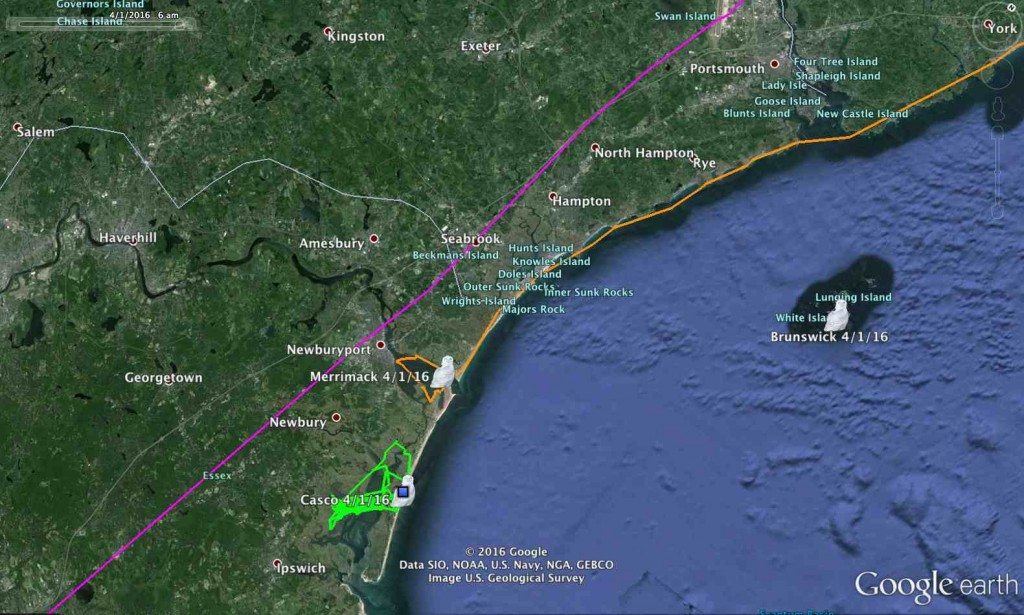 Casco and Merrimack are just a few miles from one another, Salisbury’s track (purple) headed north, and Brunswick is still in the Isle of Shoals. (©Project SNOWstorm and Google Earth)

We’d been increasingly concerned about Salisbury, between his fondness for one of the runways at Logan Airport in Boston, and his habit of hunting rats outside a large brewery and trucking depot across the river in south Boston where a lot of rodenticide was being used.

“Salisbury was a rodent eater for the most part and was allowed to roost along runway 4 Left,” reports Norman Smith, who tagged Salisbury in January, and has been monitoring him since his return. “But when it came to hunting, there was another adult male, which was banded that I was never able to capture, that was the keeper of the airfield where the rodents were concentrated.” So Salisbury had to go elsewhere for dinner. 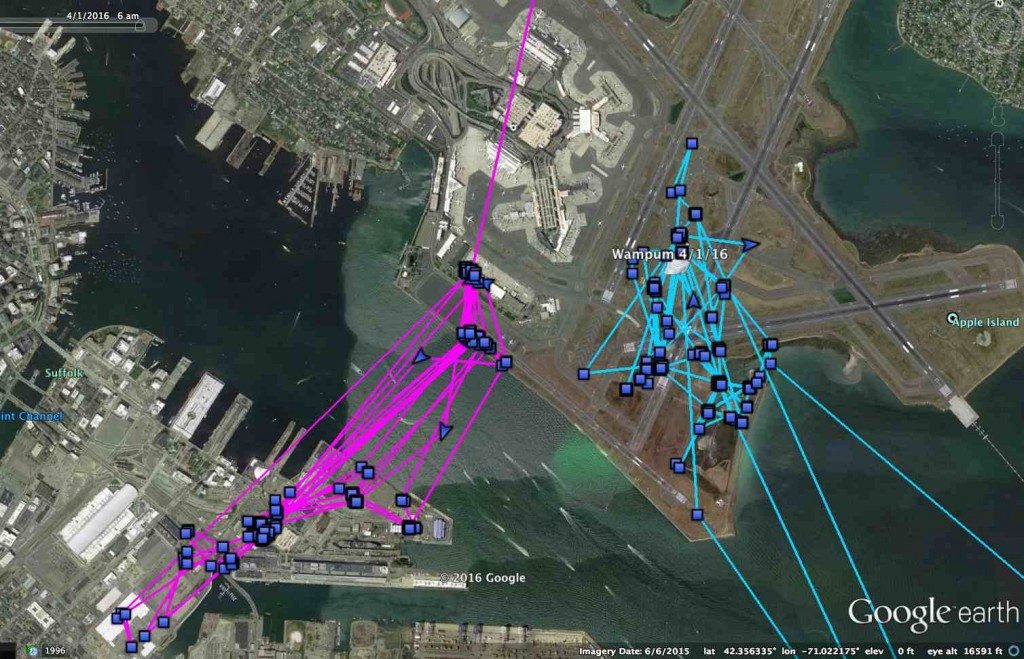 Purple tracks mark Salisbury’s movements near Logan until he headed north March 27, while Wampum (blue) is hunting birds in the middle of Logan’s busy runways. (©Project SNOWstorm and Google Earth)

Norman tried to recapture (and again relocate) Salisbury in recent weeks, part of his long-running work at Logan, but the snowy owl was having none of it. Fortunately, this week Salisbury headed north, and by Thursday evening he had just barely crossed into an area of small farms in southern Maine, across the border from Rochester, NH.

“I saw Salisbury get beaten up several times by the old male. He recently lost his roosting spot to an adult female, so that probably gave him the push to begin heading north,” Norman said.

That’s the good news. The bad news is that Wampum — who had been AWOL for several weeks — checked in, and she’d moved from the middle of the runways at T.F. Green Airport in Providence, RI, to the significantly busier airfield at Logan. Since March 19, she’s spent almost all of her time, day and night, on and around Logan’s very busy main runways — which is where she was first captured and tagged by Norman back in late December.

For owls like Wampum, which primarily hunt birds, Norman said this is an easy time of the year, with lots of woodcock and killdeer on the airfield. “Often times they capture a meal from their roosting spot any time they want. Even the oystercatchers have to be very careful now that they are here as well,” he said.

Finally, Brunswick remains out in the Isle of Shoals archipelago, where she’s been since March 7, moving between Star Island (which is famous for its large conference and retreat centers, associated with the Universalist-Unitatarian and United Church of Christ denominations), nearby Cedar Island and uninhabited Smuttynose Island. Although only separated by a few hundred yards, and connected by breakwaters, Star is in New Hampshire’s waters, and Cedar and Smuttynose are in Maine’s.

Brunswick’s spending a lot of time on Smuttynose, often perching on one of the two remaining cottages on this privately owned island. If the name seems familiar, it may be because you’ve had Smuttynose beer, brewed in New Hampshire–or because you’ve heard about an infamous double-murder case from the 1870s that was the inspiration for the novel and 2002 movie, The Weight of Water. Brunswick, we suspect, has been drawn by the wintertime solitude, and the abundance of ducks and rodents, rather than the salacious history.