The only reason we’ve been able to mount such a full court press of research this winter, taking advantage of the historic snowy owl irruption in the East and Midwest, is public support. Hundreds of individuals have given more than $31,000 through our Indiegogo campaign, and a number of state and regional ornithological organizations have made significant contributions to sponsor transmitters.

The Delmarva Ornithological Society, for example, made a $5,000 donation toward two transmitters to go on owls on the Delmarva Peninsula, which has been a hotbed of snowy owl activity this winter. In fact our very first tagged snowy, Assateague, was a Delmarva bird, back in mid-December.

But tagging additional owls proved to be harder there than anywhere else. Steve Huy, Dave Brinker and I spent many days and nights along the Delaware coast and at places like Dover Air Force Base — we even had assistance from bander David Alexander, who came in from Minnesota to help. But the owls stubbornly refused to cooperate.

Fortunately, the dam has finally broken in the past week or so. On Feb. 9, Dave and Steve trapped an immature male at Cape Henlopen, Delaware. And yesterday, they tagged an immature female on Assateague Island, Maryland, a bird we named Hungerford, for the National Park Service cabin Hungerford House, our base of operations when we’re working on the national seashore.

We’ve talked previously about the way some of the coastal birds have ranged over tremendous areas, and Henlopen is a prime example. He’s already moved more than 100 miles since he was tagged — a remarkably similar route to that taken almost two months ago by Assateague. Both birds flew around or across the Delaware Bay, across southern New Jersey and up the coast. (We’ve had a persistent, puzzling technical glitch in posting Henlopen’s interactive map, but in the meantime, here’s his track through last evening in Google Earth.) 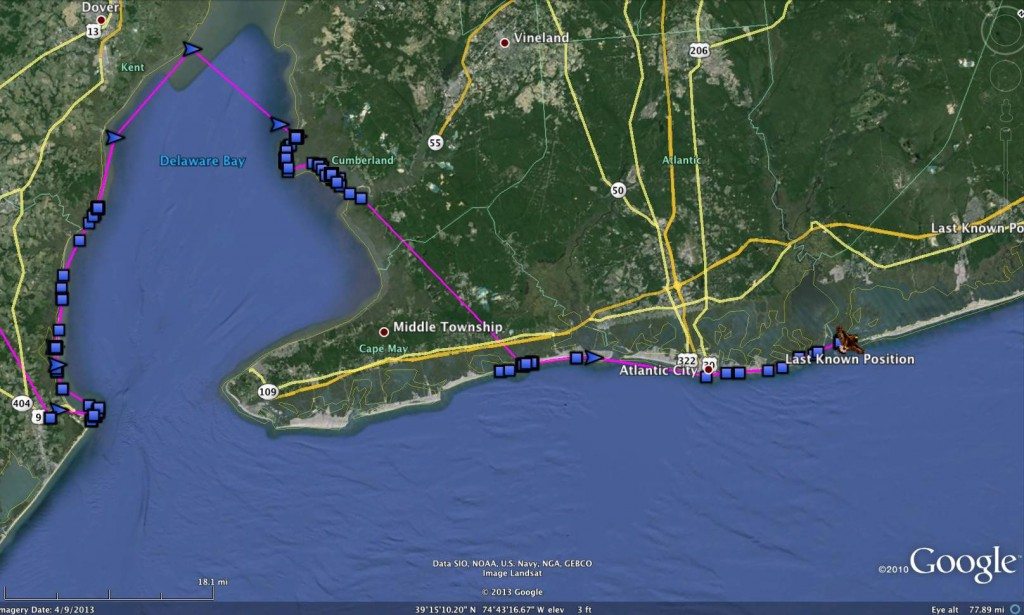 Henlopen, having spent a couple of days in Cumberland County, NJ, at the mouth of the Maurice River, cut across the peninsula to the coast (a flight of less than an hour) and began moving up the barrier islands on Feb. 16-17. In fact, just like Assateague, he stopped for a while on the end of the Steel Pier in Atlantic City (probably because the pier sticks out farther into the ocean than any other feature, not because snowy owls are especially attracted to Ferris wheels and rollercoasters).

At last report Henlopen was on Little Egg Inlet, about 23 miles south of Assateague — who since his rapid transit back in late December, has been staying on lower Barnegat Bay. (More about Assateague in a subsequent post — his transmitter just sent several weeks of accumulated data).

Hungerford, the newest tagged owl, is an immature female that weighed in about 2,170 grams. She was tagged Monday morning on the Maryland end of Assateague Island, so we only got half a day’s data for her last night when her transmitter checked in. After her release she went back to her accustomed spot along the beach, and then after dark moved into the back bay area of salt marsh, presumably to hunt for waterfowl — a pellet that Dave and Steve picked up at one of her perch sites was packed with duck feathers.

We’re not done tagging snowy owls, yet, either — and I suspect the most exciting part is yet to come, once these birds start moving back north in a month or two.

5 Comments on “Henlopen and Hungerford”