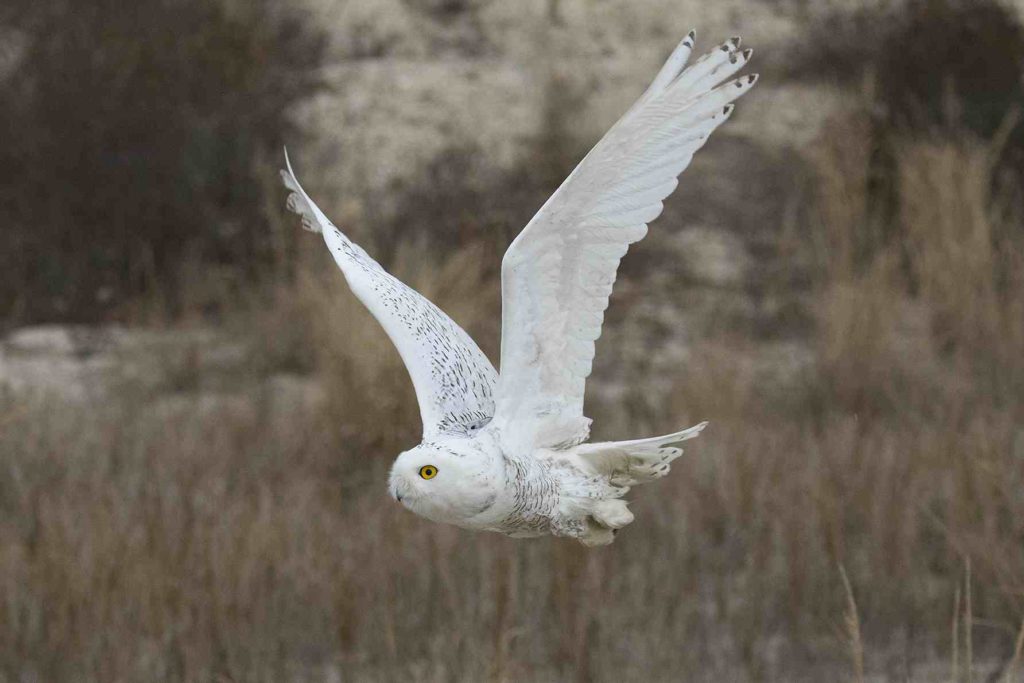 With a few flaps Higbee heads across the dunes and marshes of Cape May, NJ — his movements no longer a secret. (©Mike Lanzone)

When it snows, it really snows. Just a few weeks ago we were lamenting how, despite having had a number of our owls pass through New Jersey on their travels, we’d never been able to tag one in the Garden State. Then we hit a double header last week with Island Beach and Lenape, which were both tagged the same day at Island Beach State Park on the Jersey Shore.

On Nov. 29, while SNOWstorm collaborators Mike Lanzone and David La Puma were at Island Beach tagging those two owls, birders three hours south in Cape May spotted a fly-by snowy owl from Cape May Point. The bird was never relocated, and folks assumed it had left the area. But a few days later, on Dec. 3, another local birder spotted a snowy roosting in the dunes between The Nature Conservancy’s South Cape May Meadows refuge, and Cape May Point State Park. 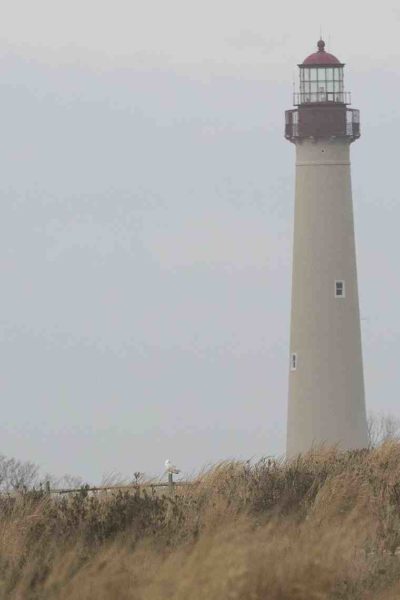 Higbee takes a rest under the iconic Cape May Lighthouse, a landmark for birders around the world. (©Mike Lanzone)

“Cape May is no stranger to snowy owls during invasion years, and hosted several individuals during the big winter of 2013-14, so many people were expecting new birds to show up this year,” said David, who is the director of New Jersey Audubon’s Cape May Bird Observatory. Getting a third New Jersey coastal owl tagged would be ideal, and Lanzone’s company — Cellular Tracking Technologies, which makes the transmitters we use — is now based just north of Cape May. Ironically, though, they didn’t have a transmitter on hand. The units are custom-made, and all of our snowy owl transmitters were in the hands of banders as far afield as Maine and North Dakota.

With one exception, that is — SNOWstorm co-founder Steve Huy, who was scouting the other side of Delaware Bay for a suitable owl.

“We knew that Steve had been on the Delmarva Peninsula near Cape Henlopen State Park a day earlier, so I reached out to him to see how close he was to the Cape May/Lewes Ferry terminal,” David said. “Lucky for us, he was right in Lewes, Delaware, although he was about to head home on a multi-hour drive. It would be impossible to get him over to New Jersey on the ferry due to his schedule, and if I took the ferry to Delaware I’d never make it back before dark.” But David made a quick call to the Delaware River and Bay Authority, asked a favor, and the ferry personnel hand-delivered the transmitter themselves across the bay. 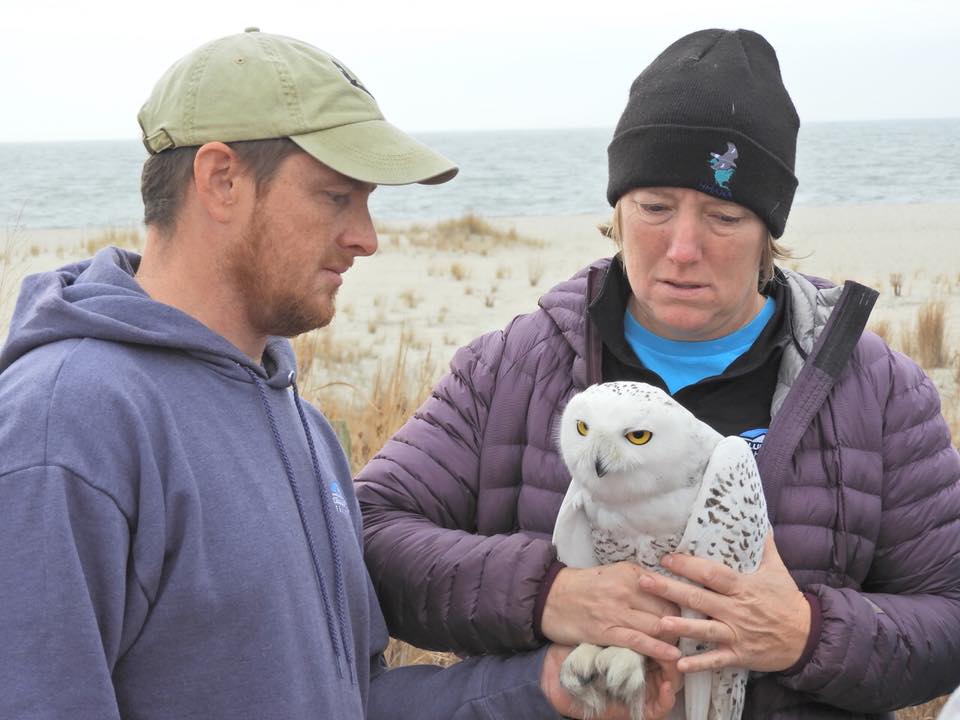 Trish Miller and Mike Lanzone with Higbee, whose transmitter is being generously sponsored by The Nature Conservancy’s New Jersey office. (©Mark Garland)

David and Mike also reached out to The Nature Conservancy, on whose world-famous refuge the owl was being seen. Would TNC be interested in sponsoring the transmitter, since their property was so critical to the owl? Adrianna Zito-Livingston, the Cape May Preserve coordinator, checked with her colleagues and came back with an enthusiastic “Yes!” Now all the team needed to do was catch and tag the owl.

As the sun headed down for the day, everyone scrambled in a rapid deployment of SNOWstorm personnel and local support — setting up trapping gear on the beach, working with local beach-walkers to understand what they were doing and steer clear, and finally drawing the attention of the owl. The bird was interested, but something about the setup wasn’t working for it, and after five flyovers it continued on up the beach and out of range, just as the last bit of light faded from the horizon — and with it, chances of catching the owl that evening. It was a tough break for the team; after all of the logistical juggling and teamwork they were sitting on a now-cold beach with nothing but a very expensive transmitter in their hands, and no guarantee the owl would still be around come morning.

The next morning, Monday, a group of local birders and SNOWstorm partners headed back out to search, and after two hours came up empty. There would be no snowy owl tagged at the TNC preserve that day — but interestingly, several new local reports of snowy owls came in, indicating that more birds were heading into the region.

Early the next morning La Puma’s phone rang. “It was Mike Lanzone, which is not atypical, but when I answered, I knew exactly what it was about even before he said anything. I could hear that he was moving quickly, and over his heavy breathing I heard, ‘The owl is back — let’s go.’ I grabbed my stuff and raced out the door.”

Back on the beach, a local birder had seen the owl and called Mike, then also alerted the morning beach-walkers so they didn’t disturb it. The owl was active, as snowies often are shortly after dawn. Within 10 minutes the team was set up, and 10 minutes after that the bird flew right into the bow net — a juvenile male they nicknamed “Higbee,” for Higbee Beach, one of Cape May’s most famous and nearby birding spots. 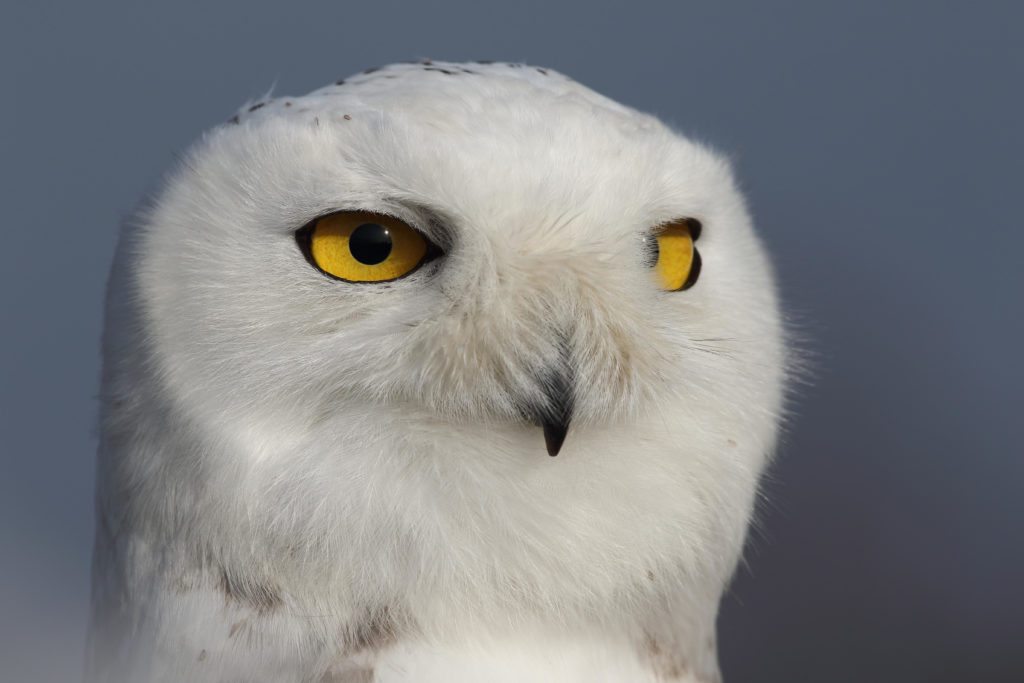 Higbee is the 53rd snowy owl Project SNOWstorm has tagged since 2013, often — as in this young male’s case — in partnership with other organizations. (©Dustin Welch)

Tagging an owl so close to home was special for Trish Miller, David, and Mike. “We were able to band, measure and fit the transmitter on the bird at the top of the TNC Meadows dune crossover, giving the bird plenty of room to relax, while also having the opportunity to talk to the public in our own community about Project SNOWstorm,” David said.

Speaking of community, this experience really embodies the collaborative nature of Project SNOWstorm — from the core project team, to great conservation partners like The Nature Conservancy, to the vibrant and supportive community in Cape May, to all of you who have been supporting us from the start four years ago.

“This young snowy owl figured out quickly that our South Cape May Meadows Preserve provides great habitat for birds,” said Eric Olsen, director of land at TNC’s New Jersey chapter. “We’re excited that ‘Higbee’ decided to visit us and Project SNOWstorm was able to tag him here with the transmitter we sponsored. The data will help further inform us about how open land in New Jersey fits in to snowy owl migratory patterns.”

It’s that kind of cooperation and enthusiasm that’s allowing us to learn so much about snowy owls and how they’re faring in a changing world — work that’s never been more important.

2 Comments on “Higbee on the Beach”