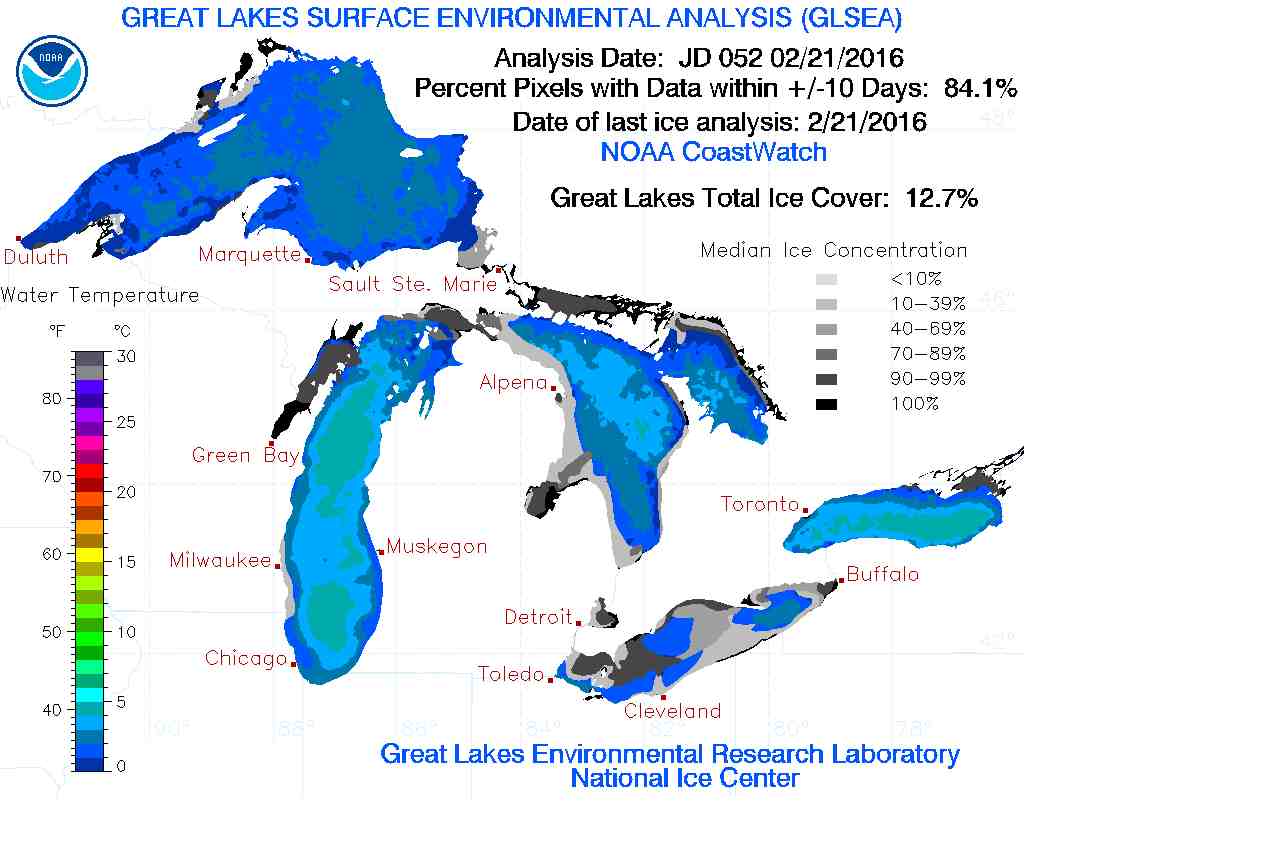 Ice conditions on the Great Lakes — all that blue and green is open water, a far cry from the past two winters. (NOAA CoastWatch)

If there’s been a theme that was missing so far this winter — one that had been nearly constant in previous years — it’s been ice.

Snowy owls love ice. For example, researchers with Laval University in Quebec (including our SNOWstorm colleague Jean-François Therrien from Hawk Mountain in Pennsylvania) have documented how some adult snowies leave the breeding grounds in autumn and actually head north, not south, spending the winter on the frozen Arctic Ocean.

We’ve seen the same attraction to ice with our tagged birds, especially on the Great Lakes. The past two winters, many of our owls spent weeks at a stretch on the ice, presumably hunting waterbirds in open-water areas, much as those Arctic-wintering owls do farther north, preying on sea ducks in permanent open-water leads known as polynyas.

Last winter at this time, almost half of Lake Ontario was under ice. This winter there’s far less — but enough for some of our tagged owls to start using it. (Great Lakes Environmental Research Laboratory National Ice Center)

This winter, though, the ice has been all but absent. Until recently, the percentage of the Great Lakes that was frozen was less than 10 percent, and even after recent intrusions of Arctic air, it’s just 13 percent — compared with more than 80 percent at this point in both of the last two winters.

One place that has frozen, though, are the bays and harbors in northeastern Lake Ontario — exactly where a number of our tagged snowies have been wintering. And with the ice, they have suddenly been liberated from land.

Baltimore has only dipped a toe in, so to speak. This past week he’s been dividing his time between the icy bay and land, but still very much within sight of the small patch of Amherst Island near Stella where he’s been since December. (He did make one trip across the channel to the mainland, as he’s done occasionally in the past.) 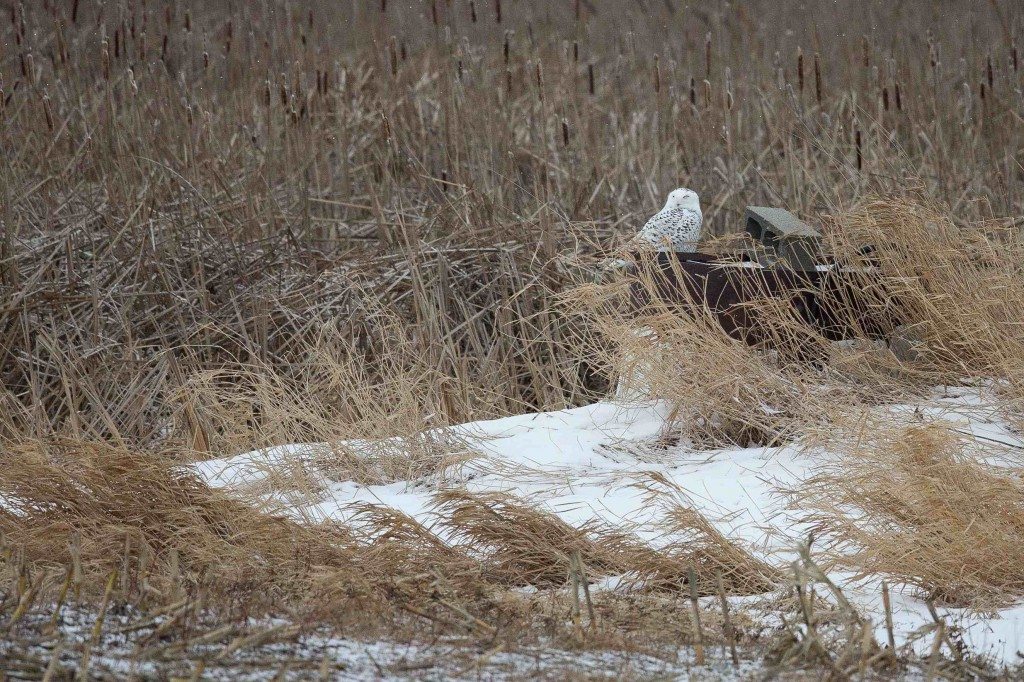 Tucked in among frosty cattails (and with her transmitter hidden among her feathers) Flanders takes a nap on Amherst Island. (©Melissa Groo)

Flanders has also taken advantage of the ice surrounding the island from time to time, but she’s mostly been restricting herself to Nut Island, the little islet south of Amherst. And in recent weeks she’s been fairly accessible for visiting photographers — we’re grateful to Melissa Groo and Patricia Lafortune for these photos. 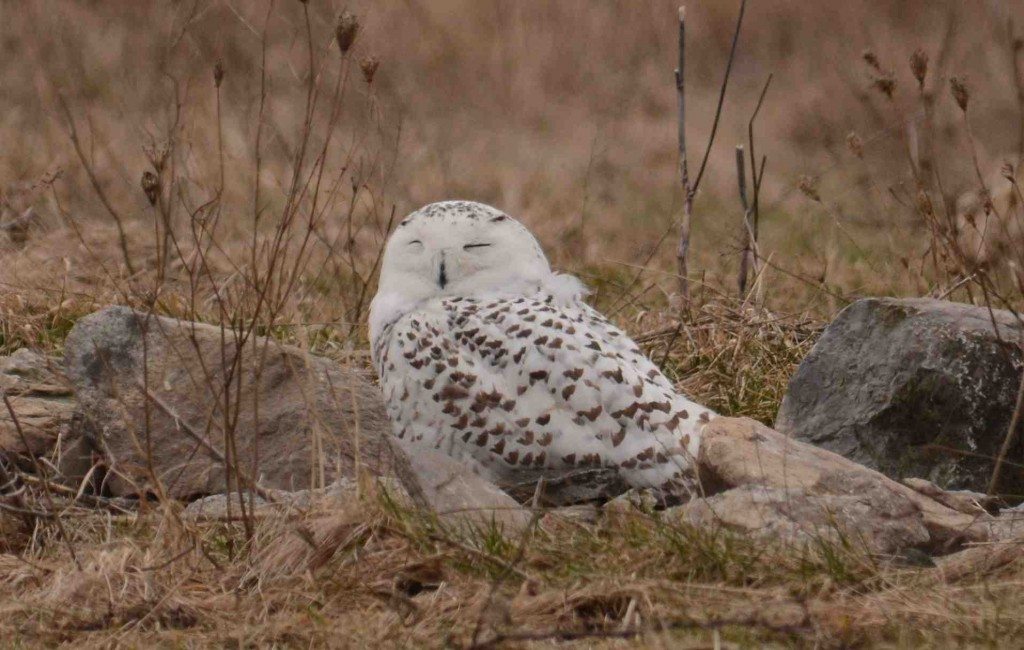 Dan and Patricia Lafortune found Flanders on Amherst Island Feb. 7 — one of 13 snowies they spotted that day. (©Patricia and Dan Lafortune) 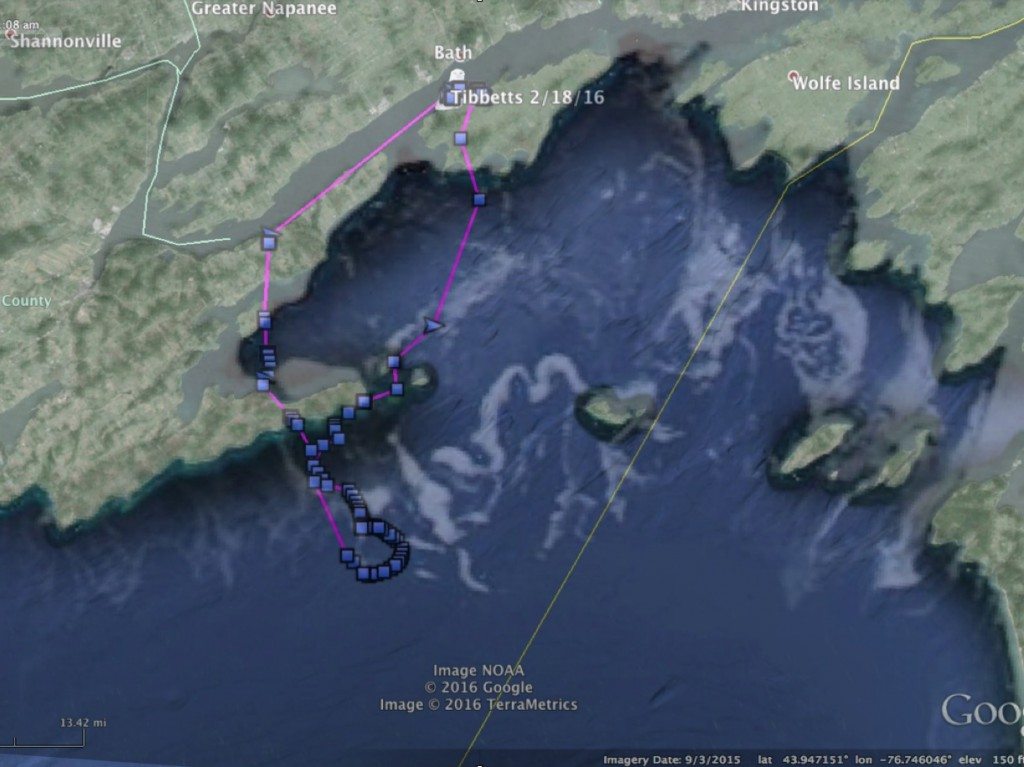 With the inner bays and harbors on Lake Ontario freezing, Tibbetts had a chance to do what snowy owls love — ride ice floes, as this composite image shows. (©Project SNOWstorm and Google Earth. Ice imagery by NOAA CoastWatch)

The real ice owl this week was Tibbetts. Having moved from Chaumont Bay in New York across the border to Wolfe and then Amherst islands, he kept moving this week, crossing the ice to Prince Edward Point, then continuing another 13.5 km (8.5 miles) out into the lake, close to the margin of new ice. 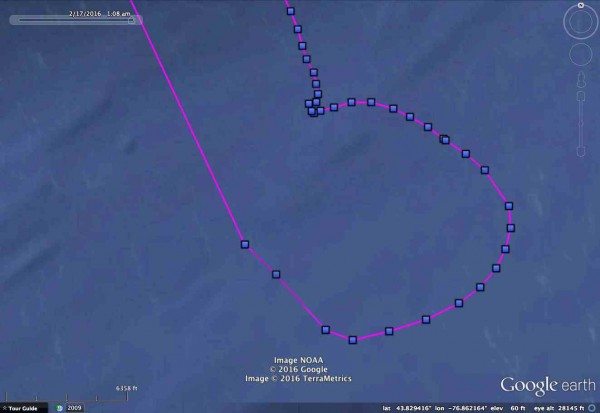 A close-up of Tibbetts’ track. The squares represent stationary locations, 30 minutes apart, so you can see how the wind shifted from north to west, then circled from the east and strengthened before he flew back to land. (©Project SNOWstorm and Google Earth)

This wasn’t shore-fast ice, but free-drifting floes or plates, because he was moving very steadily at about .6 kph (.4 mph) as the ice was pushed first south, and then west, by the prevailing wind — his track makes a very smooth curve, and as the wind switched to the east, it must have increased in velocity, because distance between his half-hourly locations legnthened as well.

After that, Tibbetts winged back across Prince Edward Point, and by the 16th was back on the bay between Amherst and the mainland, just 6 km (4 miles) west of Baltimore. 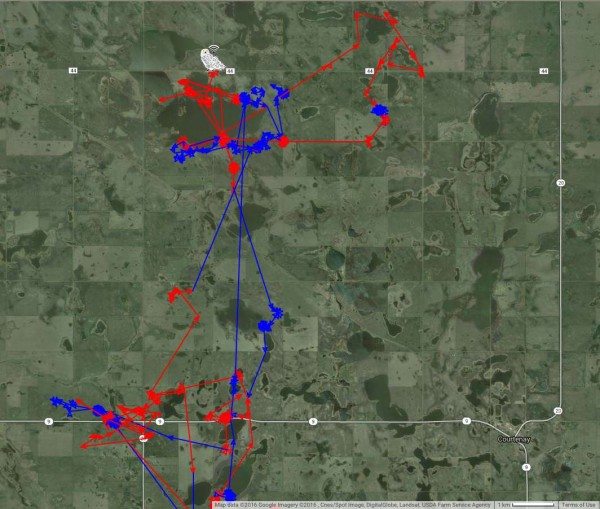 Dakota’s been more active in daytime (red on this map, mostly late in the afternoon) than many of our tagged snowies. (©Project SNOWstorm and Google Earth)

Out west, Dakota’s shifted back north to an area about 6 miles (9.7 km) northwest of Courtenay, North Dakota, along the shores of a more than 1,200-acre (490-ha) lake. Since she was tagged three weeks ago, she’s divided her time between two areas a few miles apart, moving quickly between them; her tracks are looking more and more like a lopsided barbell. As before, she’s focusing almost all of her time on the margins of lakes, ponds and marshes, where native prairie grassland hasn’t been plowed up for grain fields. The territory she’s been using covers about 13 square miles (33 square km), and she’s been more active in daytime — most often late afternoon — than many of our birds.

No ice on the Maine coast, but Brunswick was spending more time on offshore ledges (presumably at low tide, unless she’s packing a scuba tank). She also spent quite a bit of time loafing on Bumpkin Island, a treeless, two-acre nubbin near Kennebunkport, and the farthest north and east that she’s moved since she was released at Wells Beach more than a month ago. But the core of her winter range remains the beachfront and tidal marshes near Rachel Carson NWR. She’s been one of the most reliable snowy owls along the coast, and has been seen and photographed many times in the past month.

Salisbury didn’t roam as widely around Boston Harbor this past week as he had been doing, but instead spent most of his daylight hours on the Boston Science warehouse in Squantum, and his nights hunting the Morrissey Boulevard causeway between Dorchester and Savin Hill in south Boston, along the Dorchester Bay Basin.

(And while he hasn’t been perching on it, Salisbury has been hunting in the shadow of one of Boston’s most notable landmarks, the Rainbow Swash — a multi-colored design painted on a huge liquefied natural gas tank along I-93, the work of the late artist and Catholic nun Corita Kent.)

We’ve had several more contacts from Erie, our 2014-tagged owl back for his third winter. To our frustration, though, his transmitter doesn’t appear to have enough juice to send us any data, or even his current location. It could be a mechanical problem, but it may also be that he’s someplace far enough north that his unit’s just beginning to get enough daylight to wake up. With luck, we’ll get better results in the weeks ahead.

Finally, we had a intriguing report from Rhode Island photographer Geoff Dennis, who on Feb. 15 was prowling the Nature Conservancy’s Goosewing Beach Preserve, one of his favorite spots. (I’ve birded Goosewing with Geoff in warmer weather, and can understand why he loves it so much.)

Goosewing Beach is usually a reliable spot for snowies, but there have been none this winter — until that day, when Geoff found and photographed a heavily marked bird. Later in the afternoon, he watched as a second snowy came flying in from the east. As the first owl took off and gave chase, Geoff realized the intruder had an odd bump among the feathers on its back. 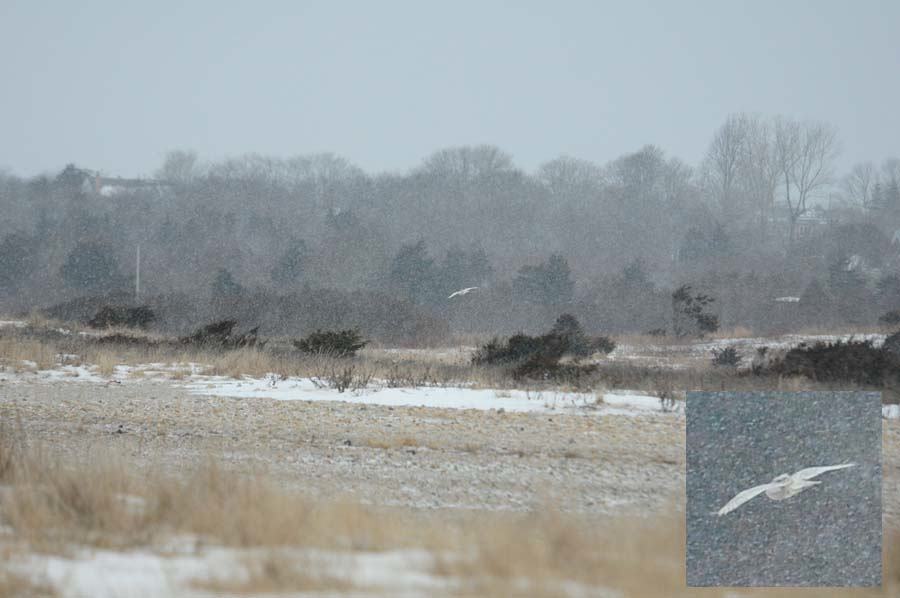 The Goosewing Beach mystery owl (close-up, inset). Is it Wampum, or a different owl with a satellite transmitter? (©Geoff Dennis)

He sent us photos, and it certainly looks like it has a transmitter. It could be Wampum, who has been AWOL for a month or so, having last checked in on Penikese Island, which lies only about 10 miles directly offshore from Goosewing Beach. On the other hand, there’s been a satellite-tagged snowy owl at Sachuest Point, just west of the Goosewing Beach area — probably a bird tagged by our colleague Norman Smith. A satellite transmitter has an external antenna wire, which our GPS units lack, and they don’t have a black solar panel — but at the distance at which Geoff saw and photographed the mystery owl, an antenna wire would have been invisible.

So was it Wampum? We don’t know, but perhaps Geoff or another birder will get a definitive photo. We’d worried that a big nor’easter, which hit around the time Wampum disappeared, might have swamped and drowned her, as sometimes happens to coastal owls. It’s also possible she suffered a transmitter failure of some sort. Geoff was back looking for the bird the next day, but both snowies disappeared and haven’t been seen there since.

Chaumont, and an Owl Called Hardscrabble
All Roads Lead to Amherst